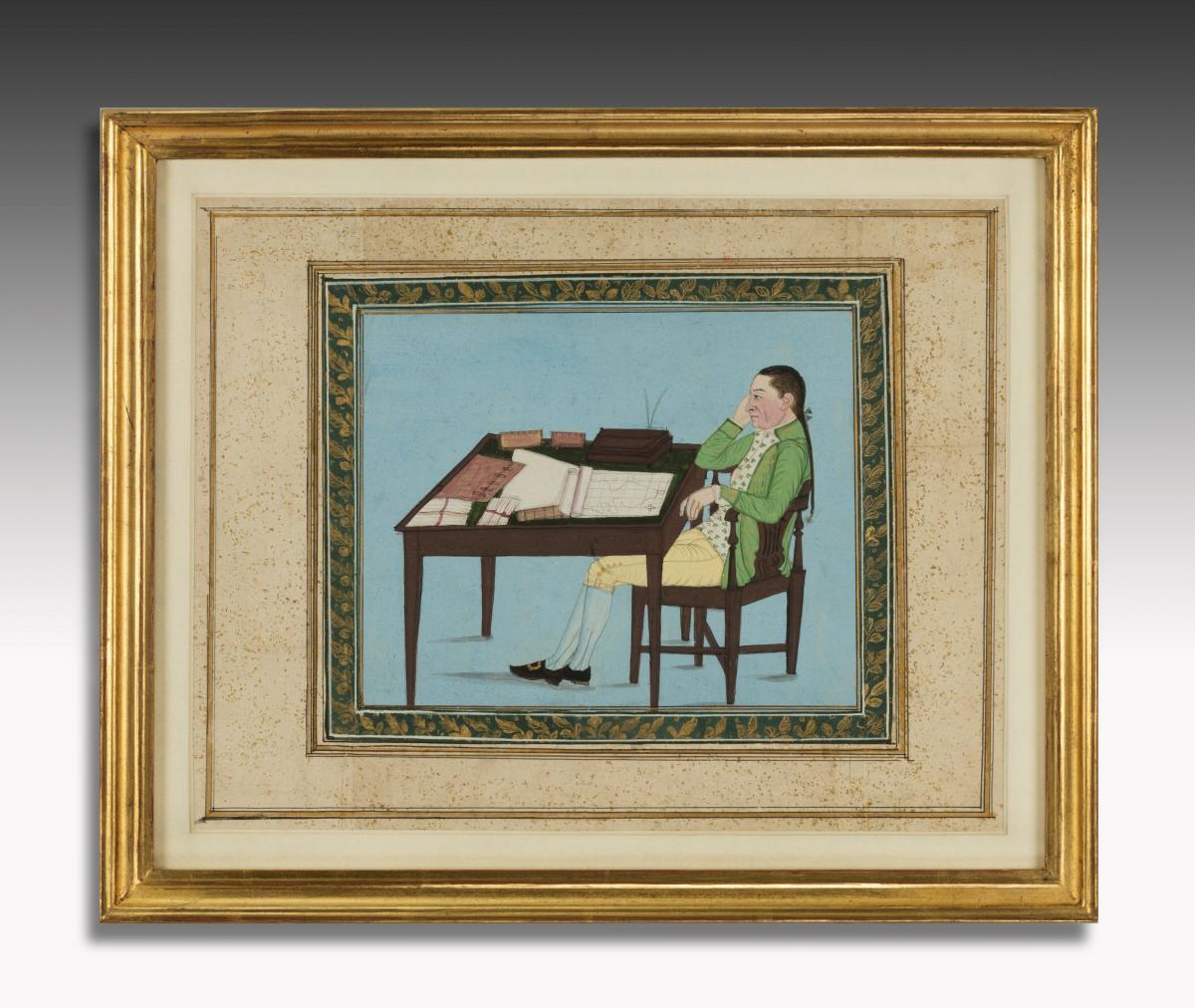 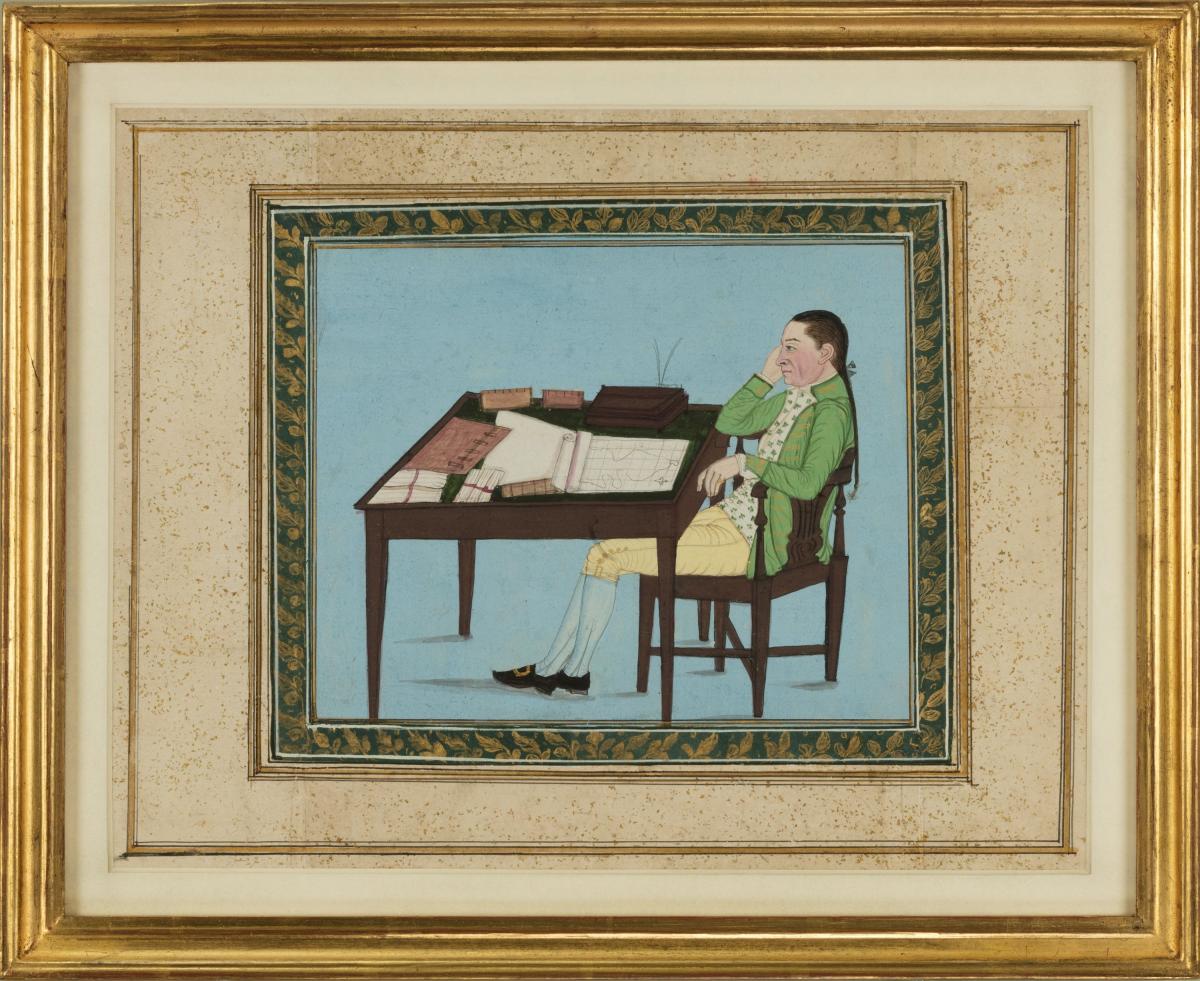 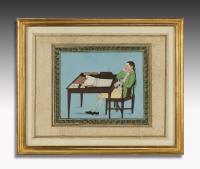 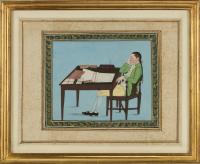 Depicting Jonathan Duncan (1756-1811), who was the Governor of Bombay from 1795 until 1811, seated in profile at his desk. A number of papers are spread out in front of him, including a map of India. Set within foliate and gold-splash borders. Framed.

Provenance: From the collection of Edward Moor (1771-1848), British soldier and scholar.

By descent in the Moor family until 2017.

Jonathan Duncan (15 May 1756 – 11 August 1811): Jonathan Duncan received a nomination to the East India Company’s civil service, and began his career in India in 1772, when he reached Calcutta. In 1788, he was appointed superintendent and resident at Benares by Lord Cornwallis, where he devoted his time to suppressing the practice of infanticide. On 27th December 1795, he became Governor of Bombay, and held that post for the rest of his life – nearly sixteen years – until his death in 1811. During his time as Governor he brought administrative control over nearly 600 princely states and suppressed infanticide.

Welch comments that ‘[a]lthough isolated examples of Indian painting for the British prior to the 1760s might turn up, it was not until British power had gained stability…in 1757, that the British really counted as patrons.’ (Stuart Cary Welch, ‘Room for Wonder’, p.22). ‘Having discovered the delights of hiring Indian artists, who were as talented and obliging as they were plentiful, English patrons soon thought up many tasks for them’ – the earliest of these being portraiture (p.22).

Edward Moor (1771-1848): Edward Moor entered the Madras establishment as a cadet of the East India Company in April 1783. In September 1788 he was promoted to Lieutenant. His proficiency in the native tongue was noticed at this time. He was put in command of a grenadier company of the 9th battalion in 1790, when war broke out. On 29th December 1791 he was injured at the battle of Gadjmoor and was forced to return home on sick leave. Whilst back in England he married Elizabeth, daughter of James Lynn of Woodbridge, on 10th July 1794. They had two children - Edward and Charlotte. In April 1796, Moor re-embarked for Bombay with the brevet rank of Captain (a brevet was a warrant giving a commissioned officer a higher rank title as a reward for heroism or commendable conduct, but without receiving the authority, power, or pay of the rank). In July 1799 he was appointed garrison storekeeper (commissary-general) at Bombay, a post which he held until his departure from India in February 1805. Moor knew Governor Jonathan Duncan and, in 1800, at Duncan’s request, he made a ‘Digest of the Military Orders and Regulations of the Bombay Army’, which was printed at the expense of the government. On 14th September 1800, Governor Duncan awarded Moor ten thousand rupees for his original work, and an additional two thousand rupees for the additions which he subsequently made to it.

Major Edward Moor was the author of ‘The Hindu Pantheon’, published in 1810, the first publication in a European language dealing with Hindu iconography and detailing the Hindu gods. The original edition of ‘The Hindu Pantheon’ was extensively illustrated by engravers including William Blake – the engravings taken from Indian paintings in Edward Moor’s own collection. The majority of Moor’s collection – over 600 pieces which included small devotional bronzes and Rajput paintings - was gifted to the British Museum by Mrs A. G. Moor in 1940 (http://www.britishmuseum.org/research/collection_online/search.aspx?people=138672). In 1796 Moor was elected a member of the Asiatic Society of Calcutta; in 1806 the Royal Society; and in 1818 the Society of Antiquaries. He was also a member of the Literary Society of Bombay and of other learned societies in India, England, and France.

An ‘Advertisement’ on page v. of the ‘Transactions Of The Literary Society Of Bombay’, Volume 1 (Richard and Arthur Taylor, Shoe-Lane, London, 1819), reveals that ‘The Honourable Jonathan Duncan, governor of Bombay’ and ‘Major Edward Moor’ were two of the seventeen men who were present at the first meeting of the Literary Society of Bombay on 26th November 1804. They were like-minded individuals who spent time socialising together whilst in India.