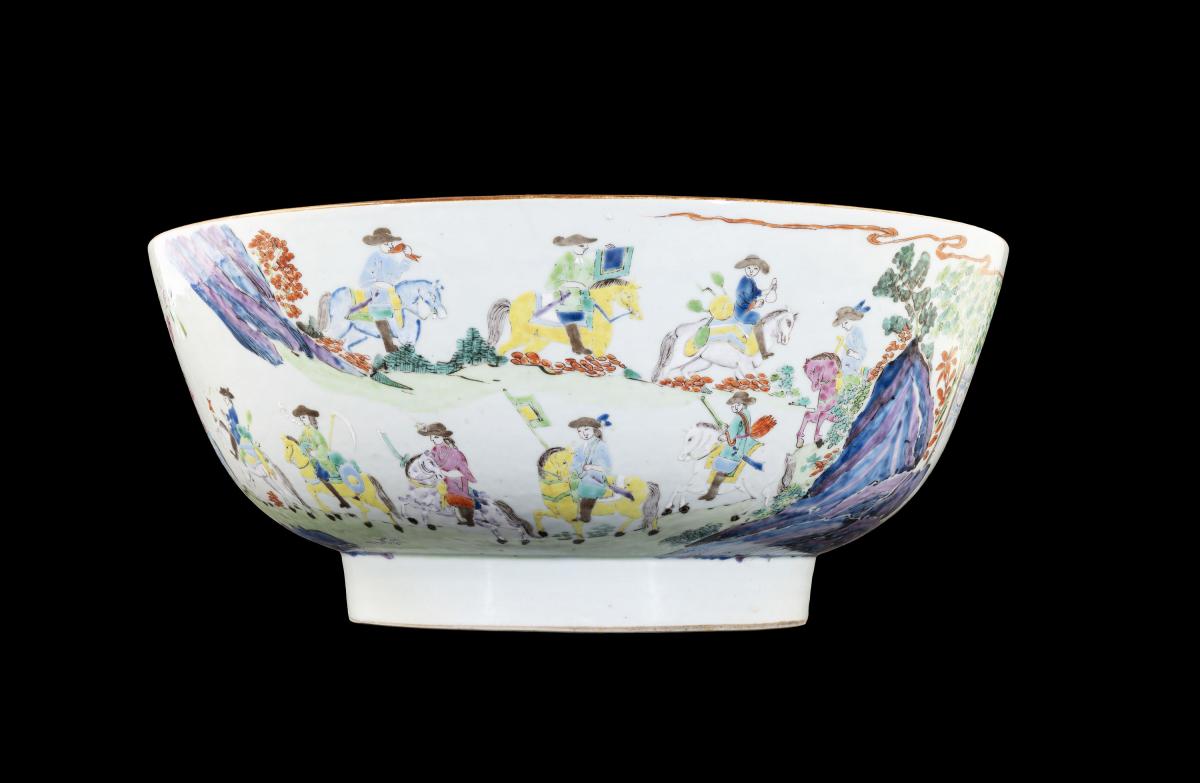 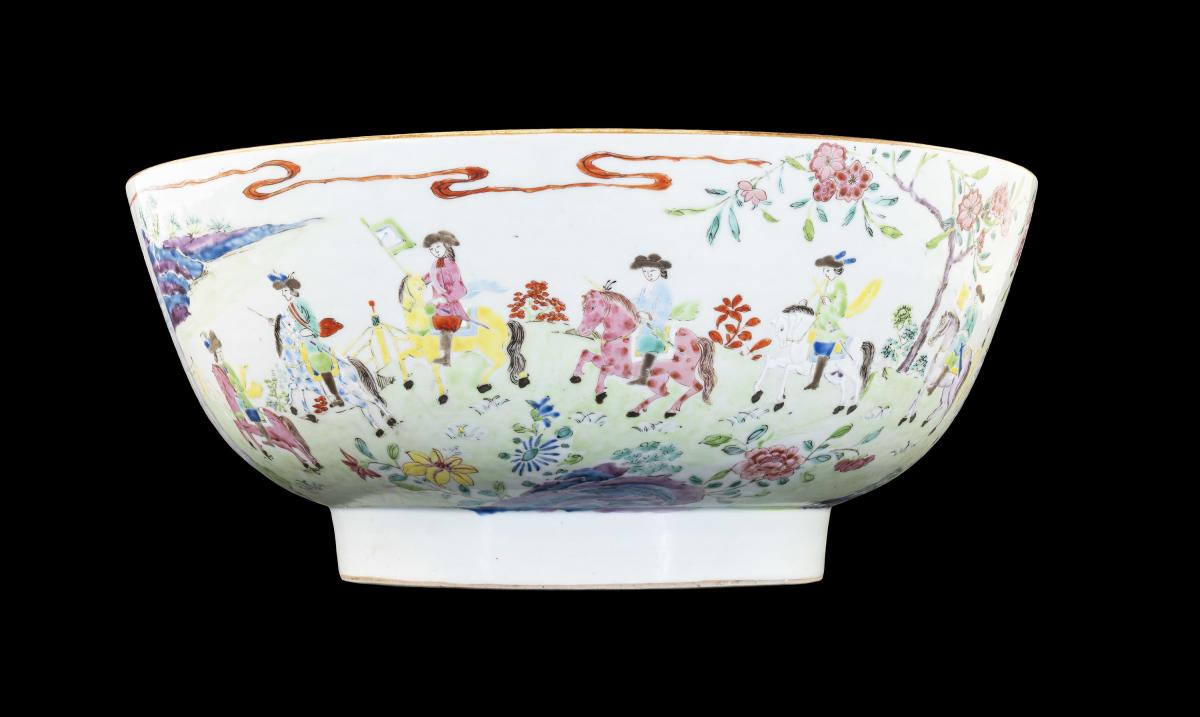 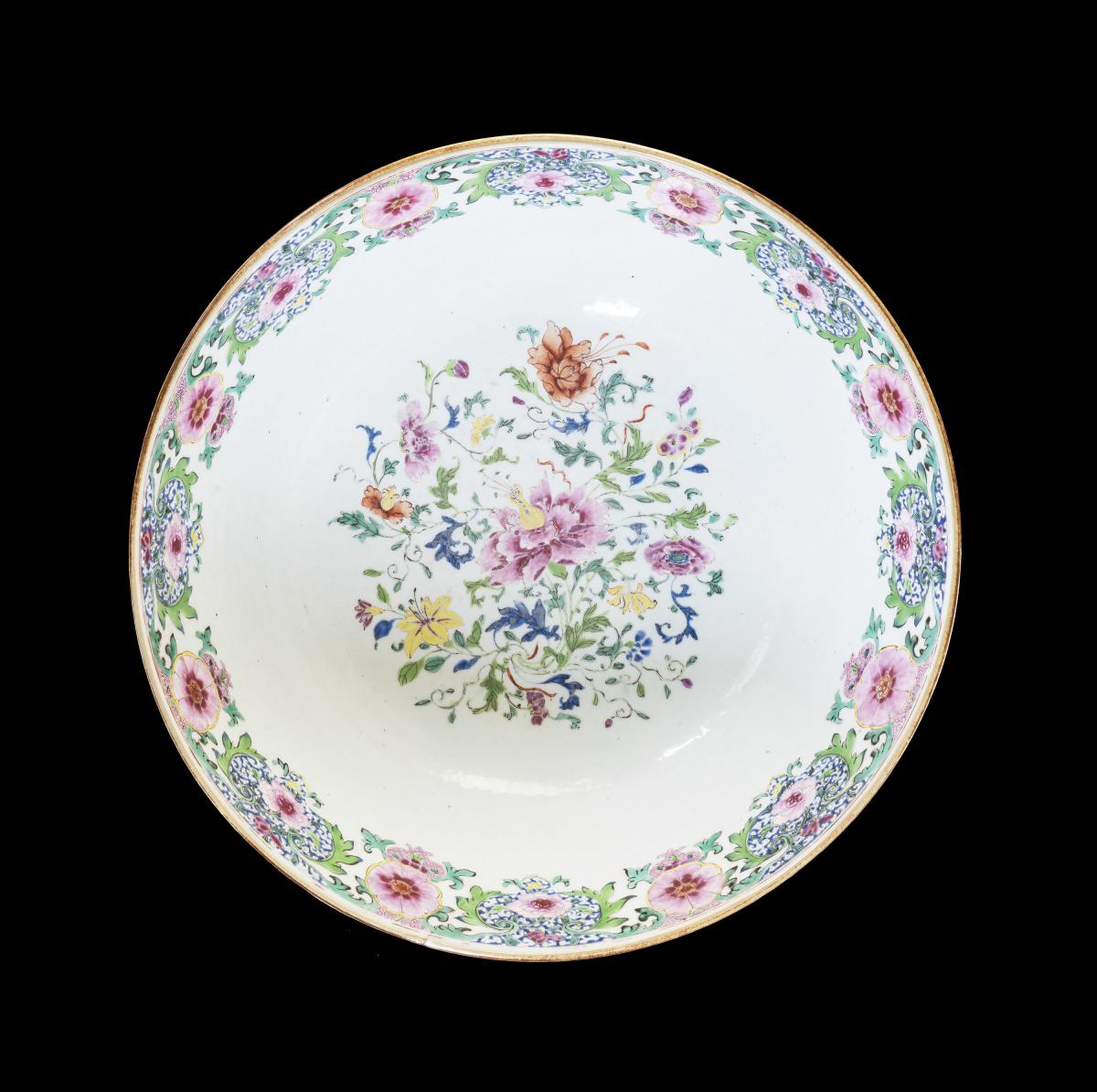 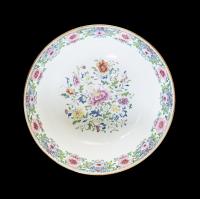 An extremely rare Chinese export porcelain punchbowl decorated in famille rose enamels with a colouriful procession of European figures on horseback in a continuous scene around the exterior, the interior with flowers.

The images on this bowl show a procession of European figures on horseback in a composition that was inspired by Chinese scroll paintings of such diplomatic missions, with a propaganda subtext of supplication. It has been suggested that this was made to commemorate the centenary of an Embassy of Dutch traders in 1655 to the Chinese Emperor, but the enamelling dates this piece to the very end of the Yongzheng period, (about 1735) and in any case there were many different embassies so probably it was just made for Dutch merchants who were renewing trade in the early 1730s after a quieter period dominated by the English.

In the early 17th century the Portuguese had the monopoly of trade with China, dominating from their base in Macau. The Dutch VOC tried to break this by sending diplomats to the Shunzhi Emperor in the new Qing court, with at least six Embassies between 1655-85. The second of these is well documented, as the steward was Johan Nieuhof (1618-1672) who wrote and illustrated an account of this journey between 1655-58, published in 1665, with an English translation by John Ogilby in 1669. It is in two parts, the first covering the journey from Batavia to Peking and back and the second an overview of China at that time. Nieuhof had entrusted the publication to his brother Hendrik and Jacob van Meurs and he had continued travelling. He disappeared circa 1669-70 in Madagascar.

The illustrations were very influential and formed the basis for much chinoiserie design in the West. The original drawings by Nieuhof were rediscovered in 1984 in the collection of Roland Bonaparte.

One image by Nieuhof from a later book is known on Chinese porcelain, a rather roughly drawn version of the New Gate at Batavia found on Kangxi blue and white plates, though other designs may have been inspired by his works.

References: Gyllensvard 1990, p124, a fishtank with the same decoration of a similar procession, in Kina Slott, Drottningholm, Sweden; Howard & Ayers 1978, No 229, another puchbowl with the same design.