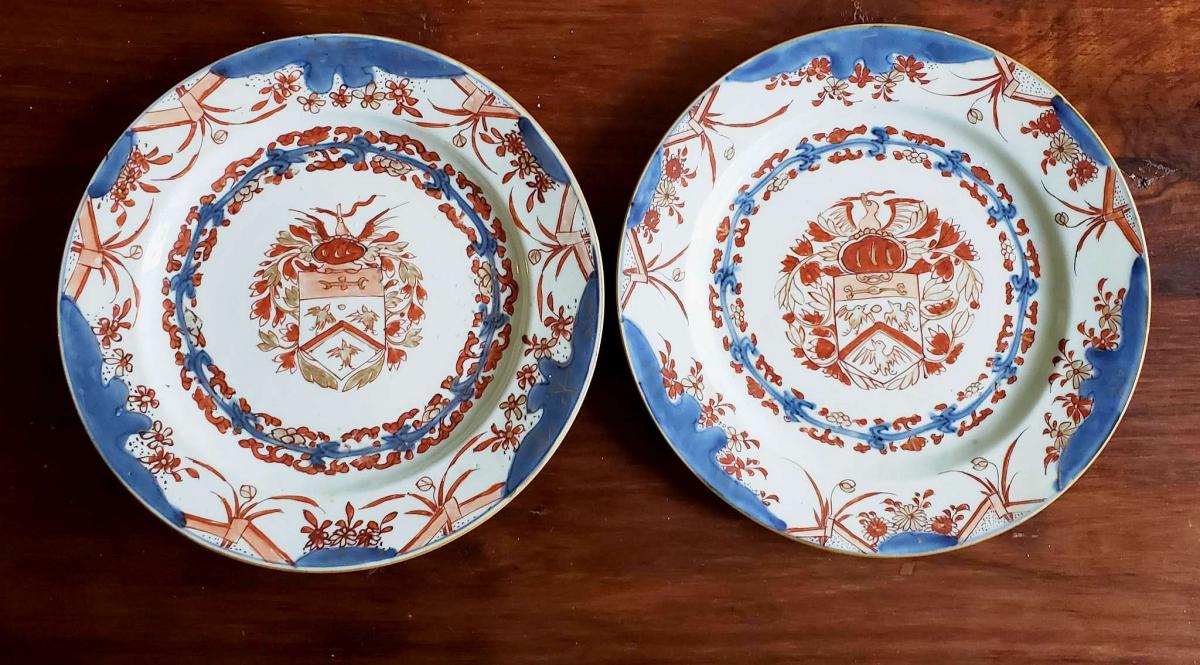 The imari armorial plates were made for the Dutch family, Van Gellicum. An armorial in the centre and on the sides a floral scroll border, the rim with rocks, flowers, leaves and zig-zag lines.

The zig-zag lines represent a thunderbolt seen on Delft faience of the first quarter of the 18th century and based on Japanese patterns.

On the border there is a band of scrollwork and flower sprays. According to Jochem Kroes in Chinese Armorial Porcelain for hte Dutch market: Chinese porcelain with coats of arms of Dutch families only plates have been found from this service.

This coat of arms, a Chevron between three eagles and a bezant, in chief an unidentified charge; the crest is a heron-like bird with an eel (or snake) in its beak between two wings, was borne by the Van Gellicum family.

Harmen van Gellicom, a native from Gorinchem The Netherlands, who was kwartiermeester (quarter-master or leading seaman), on four East Indiaman sailing on behalf of the Dutch East India Company, Vereenigde Oost-Indische Compagnie, VOC), Chamber of Zeeland to Batavia between the years 1728 and 1736.

The date of this porcelain correlates with his time in the Indies.

Chinese Armorial Porcelain for the Dutch market: Chinese porcelain with coats of arms of Dutch families, Jochem Kroes. See page: 118. for discussion of arms and family.

Chinese ceramics in the collection of the Rijksmuseum, Amsterdam: the Ming and Qing dynasties, Christiaan J.A. Jörg; in collab. with Jan van Campen. Page 352.