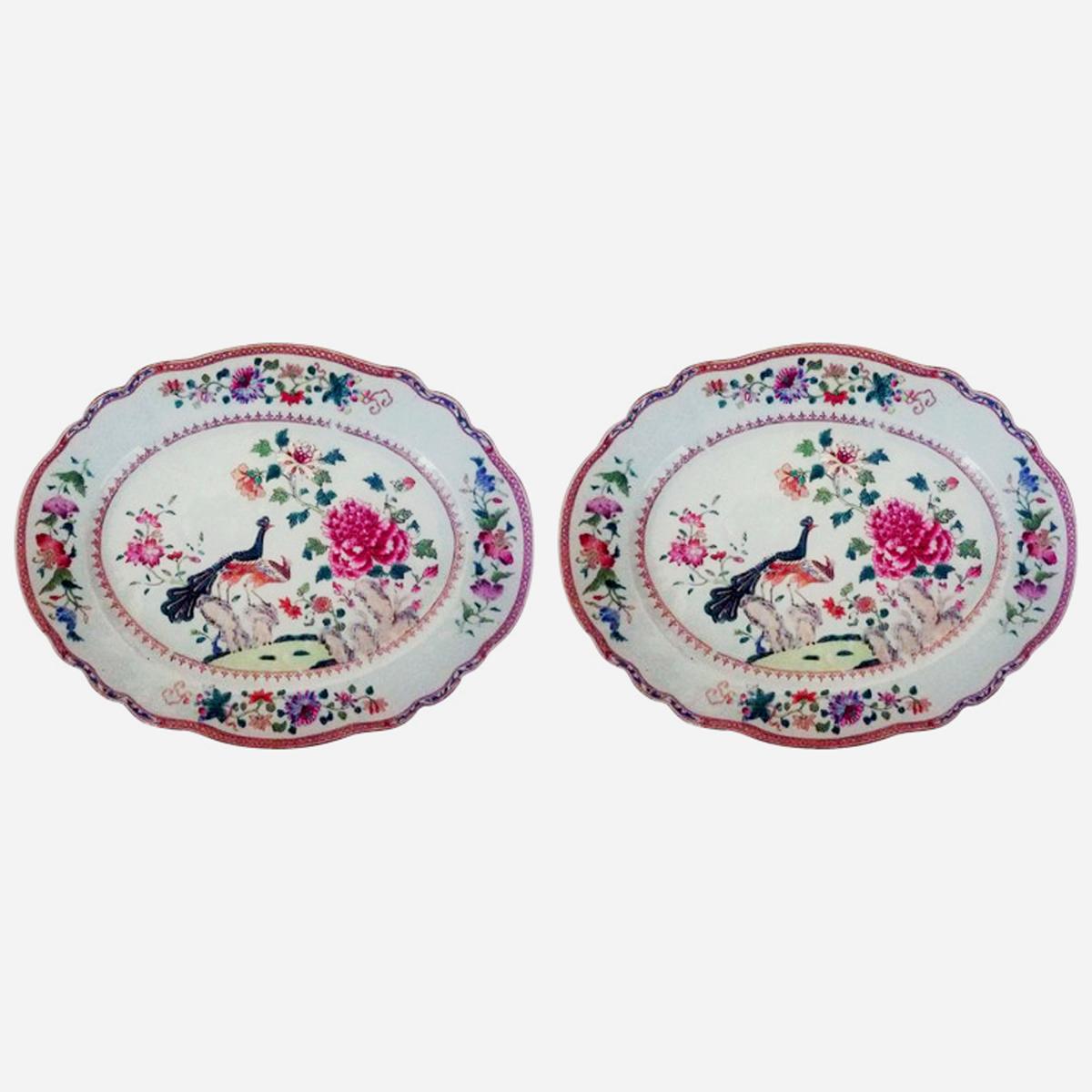 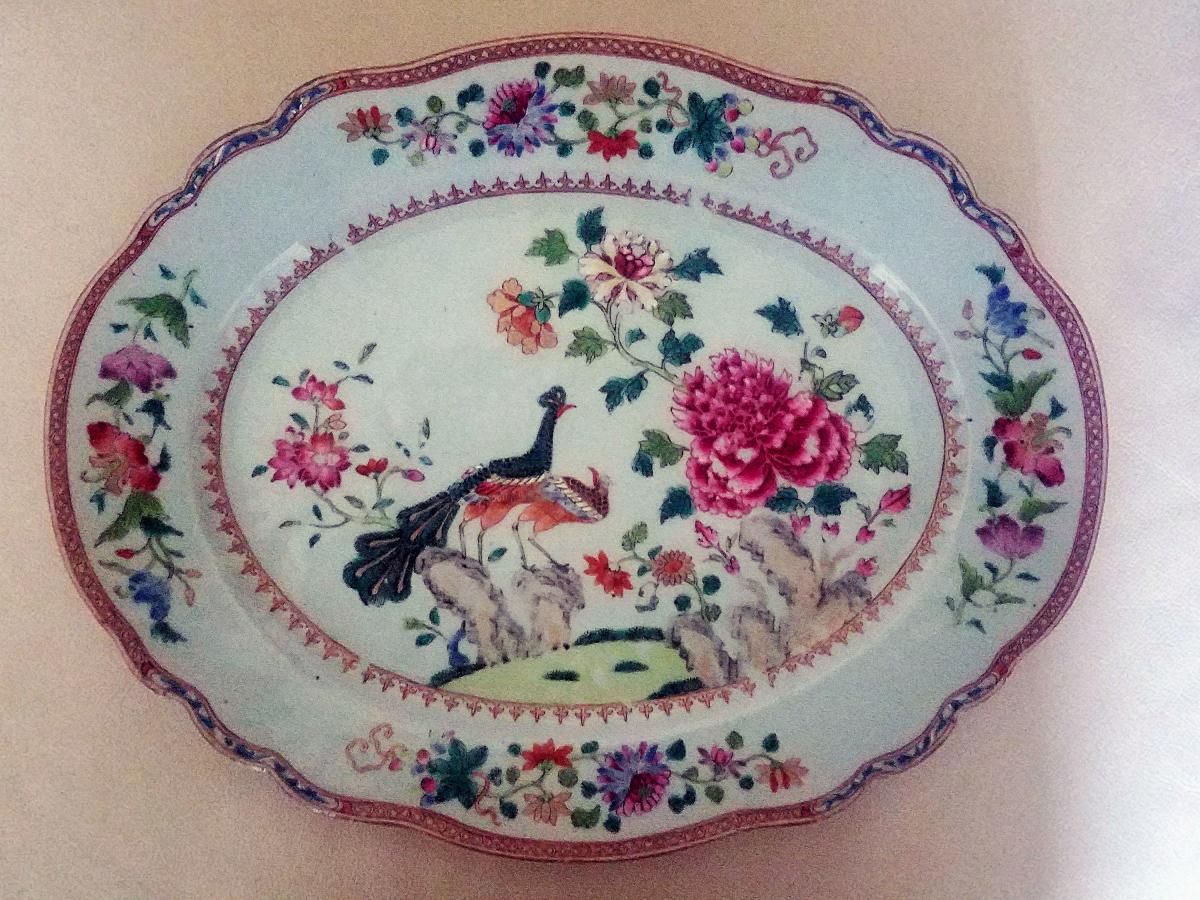 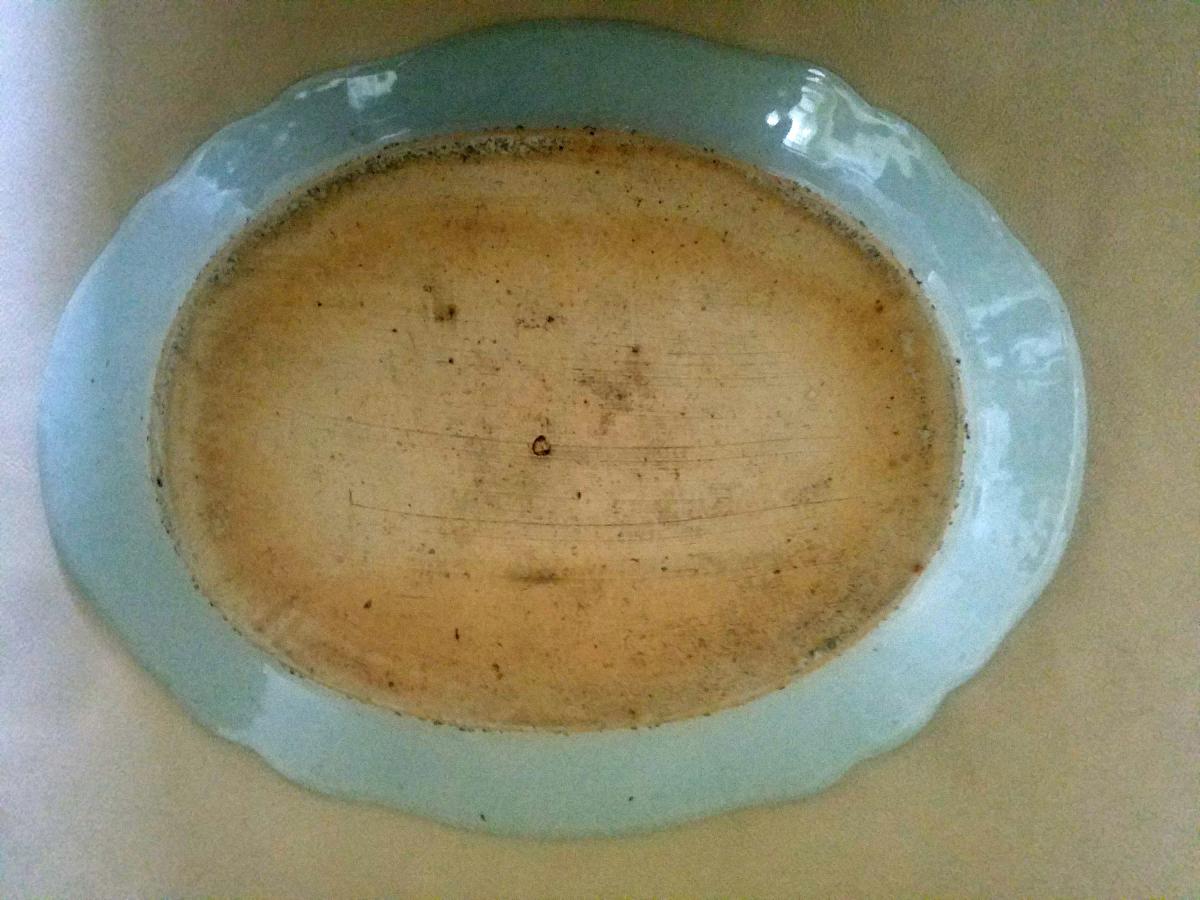 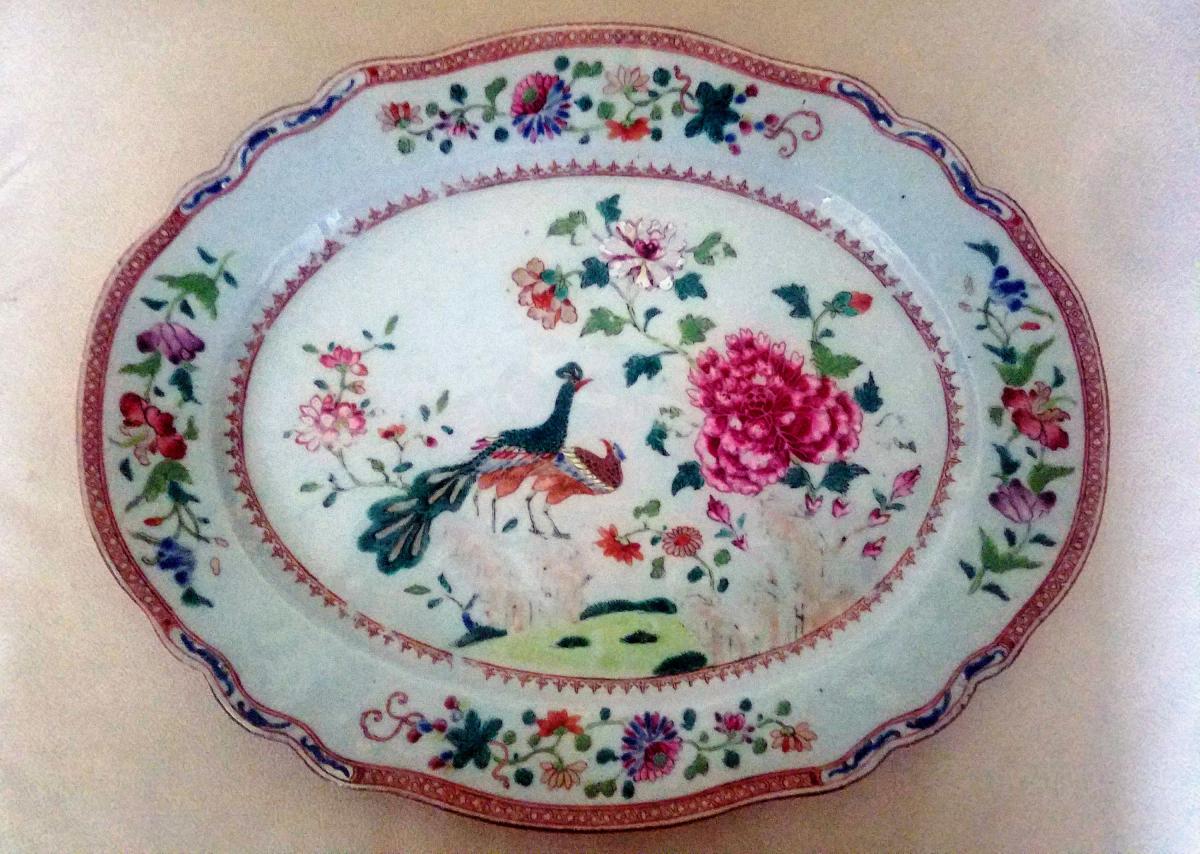 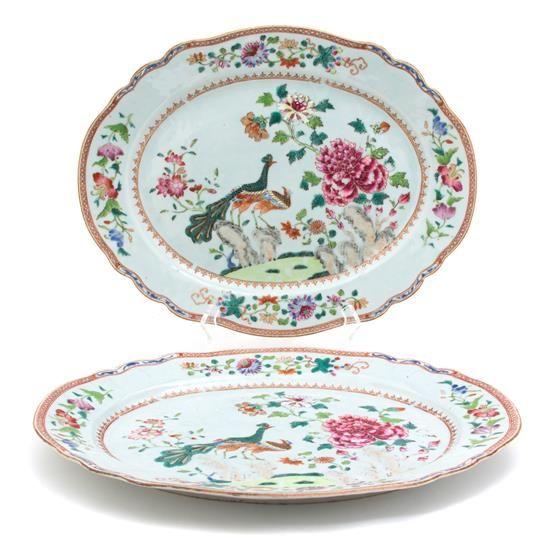 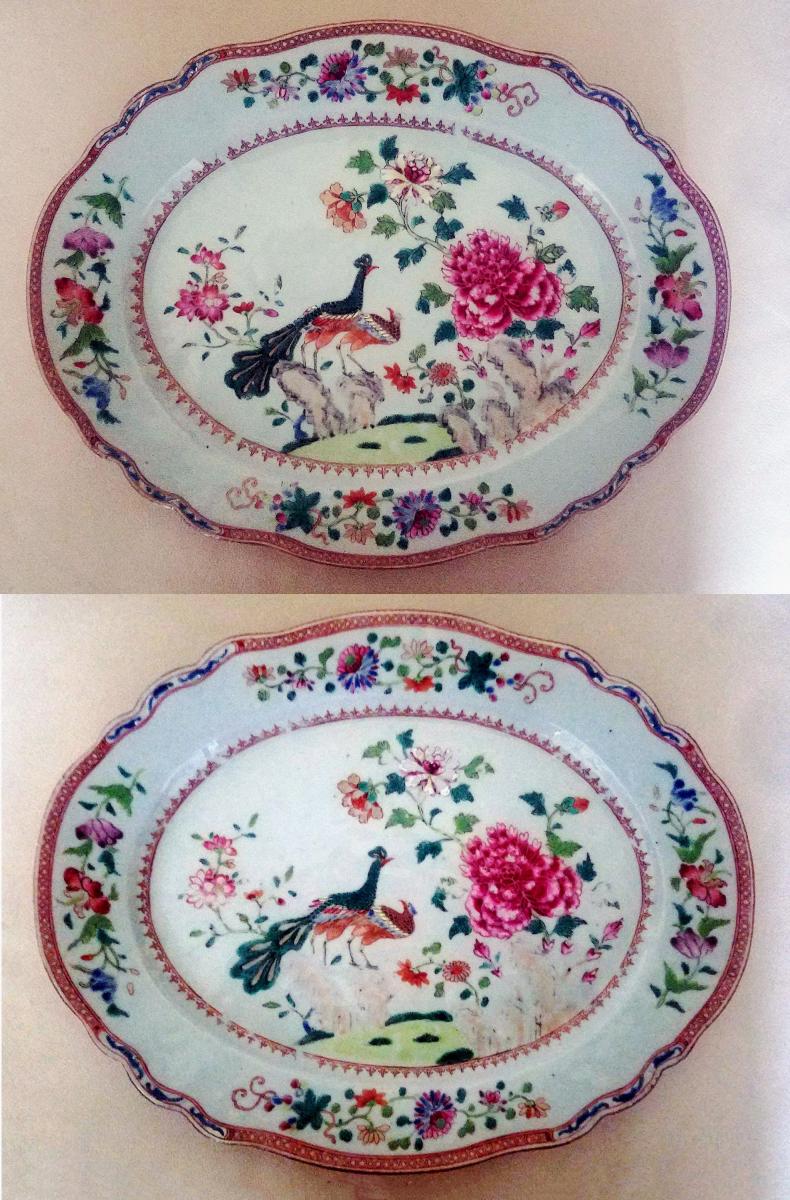 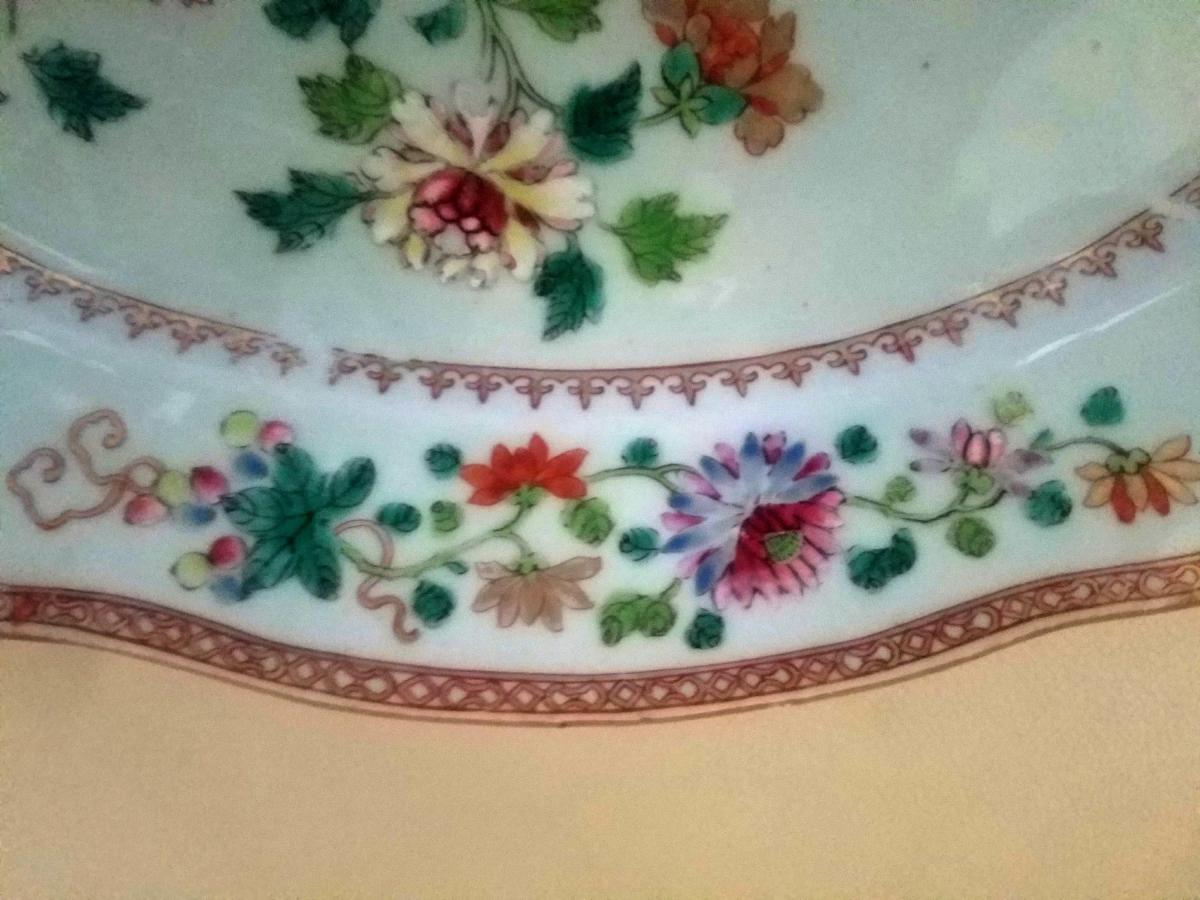 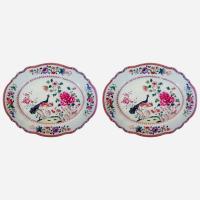 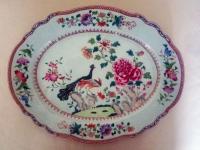 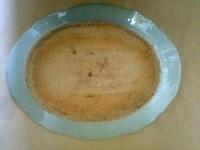 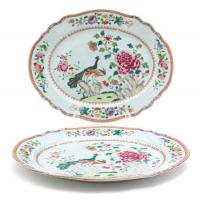 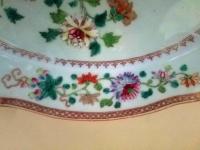 The design on the pair of large Chinese Export famille rose dishes consists of two brightly coloured peacocks standing on rockwork with another rock formation opposite with flowering plants issuing forth, all within a spearhead border.  The rim has an alternating pattern of blue enamel and rouge de fer and gold.

This pattern, known as "Serviço dos Dois Pavões" or "Double Peacock Service", is one of the most famous patterns in Chinese Export Porcelain, especially in Portugal and Brazil.

The Royal family of Portugal owned one service with this pattern. When Napoleon invaded Portugal, King Joao VI, soon Emperor of Brazil, fled in exile to Brazil and brought his services with him, including this one. The royal and imperial family used it then at Paço de São Cristóvão and at Fazenda Imperial de Santa Cruz.

It is known as the viajante service because, it first travelled from China to Portugal, and then from Portugal to Rio de Janeiro. When the Empire turned into the Republic of Brazil, the six Chinese Export Porcelain service of the king Joao VI were scattered in 1890 through auctions held in 1890 by the auctioneer Joaquin Dias dos Santos in Rio de Janeiro. Since the archives of the auction house burned, it is now impossible to distinguish the pieces formerly owned by the King Joao VI from the pieces with this pattern produced at the same period.

The expert Almeida Santos wrote in his Manual do Colecionador Brasileiro (Guide for the Brazilian Collector): "The services for imperial use, in Brazil, include the "Roosters", the "Shepherds", and the "Peacocks". The Double Peacock Service is the finest one of the "Famille Rose" and was made on demand for Europe, without any doubt. The "Peacocks" are very well designed.

It is a service known as "traveller", because it was taken from China to Portugal, and from Portugal to Brazil, when John VI, then Prince of Portugal, afraid from the Napoleonic Wars, moved to Rio de Janeiro with his mother, Queen Mary I. In Brazil, it was used in the Paço de São Cristóvão.

Good with no restoration