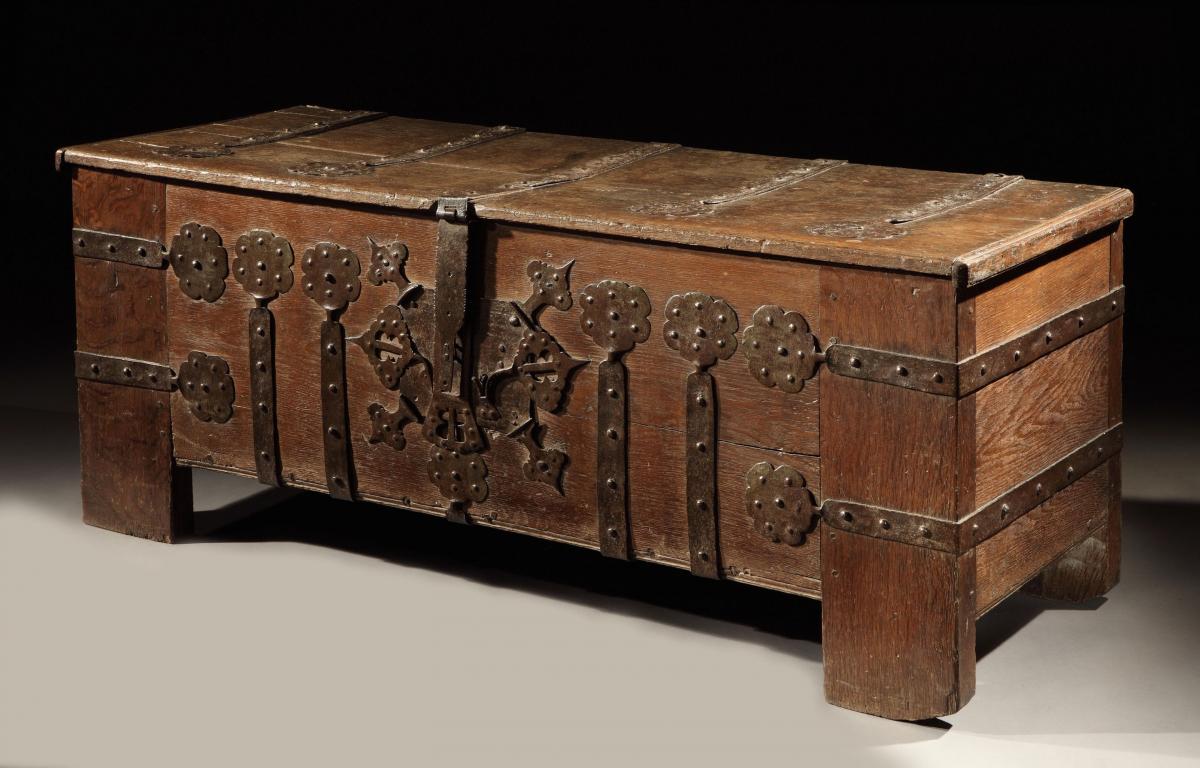 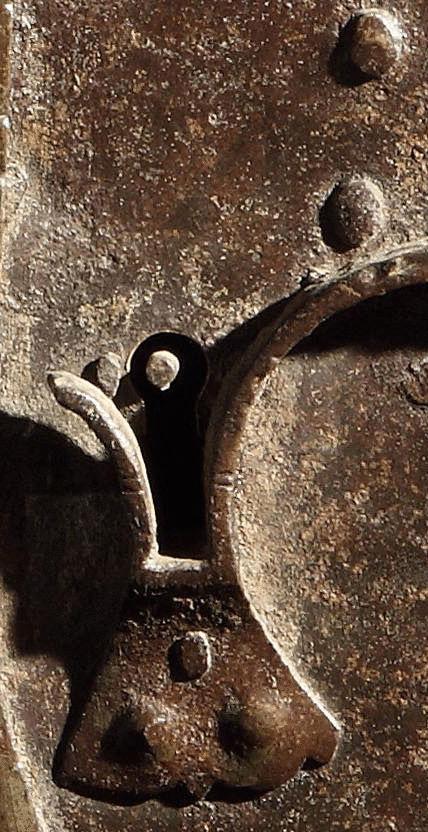 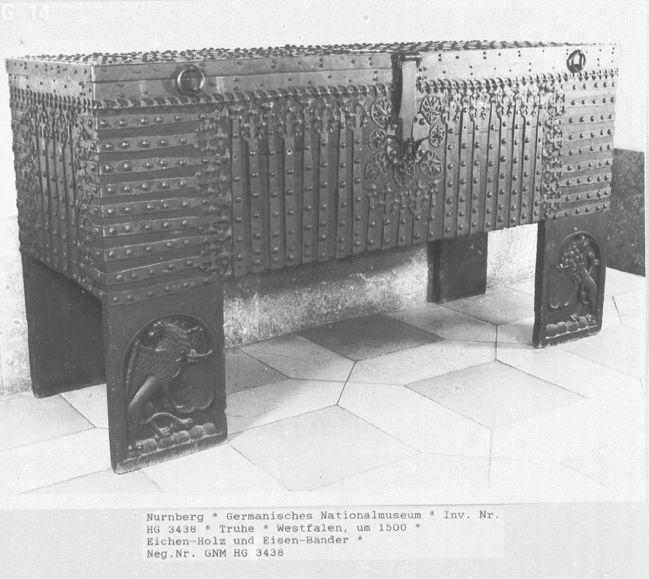 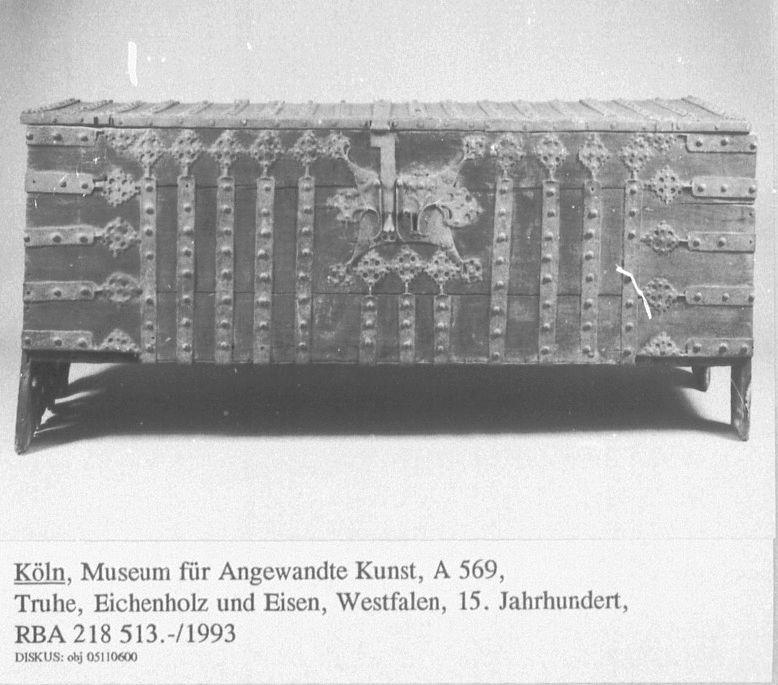 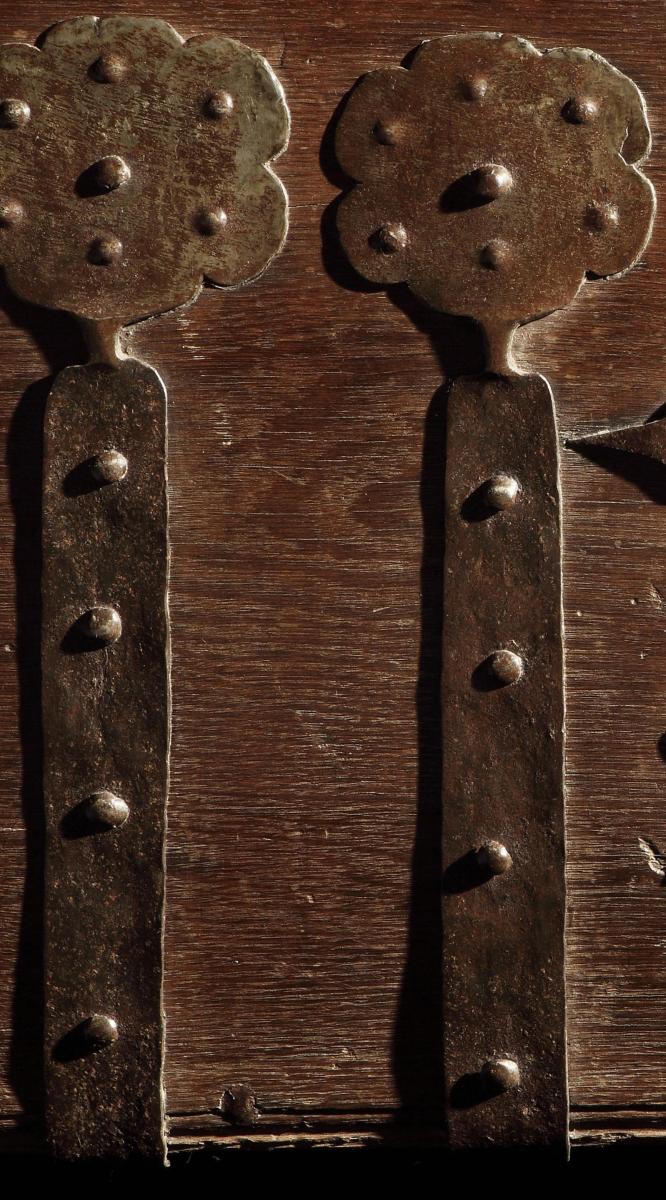 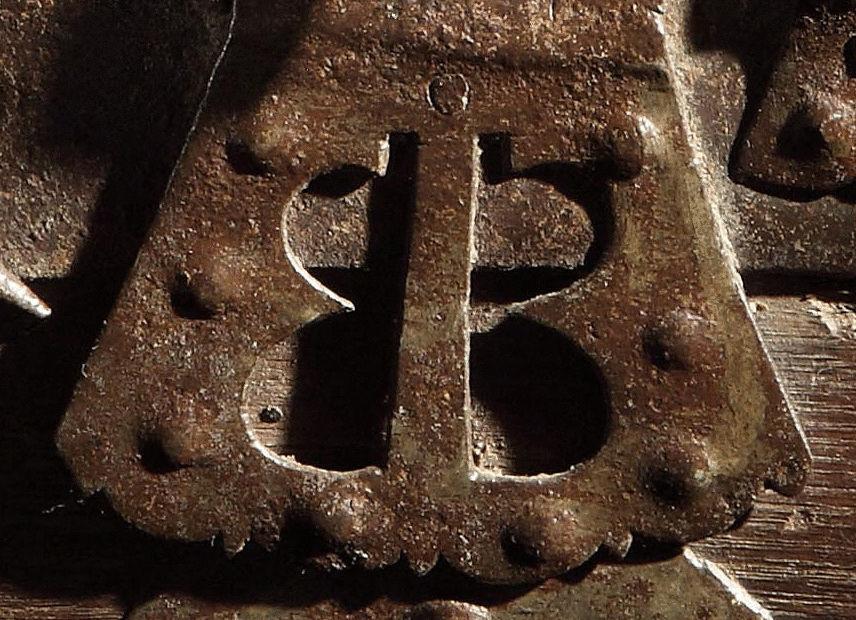 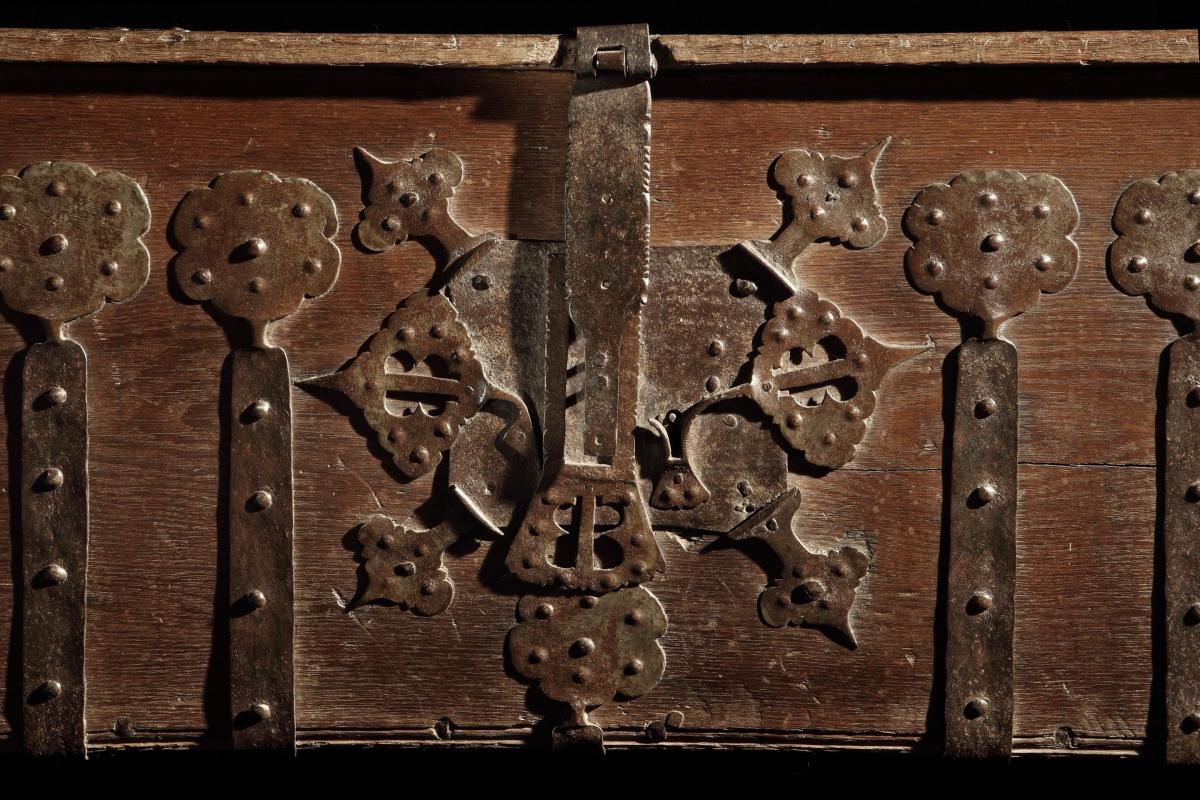 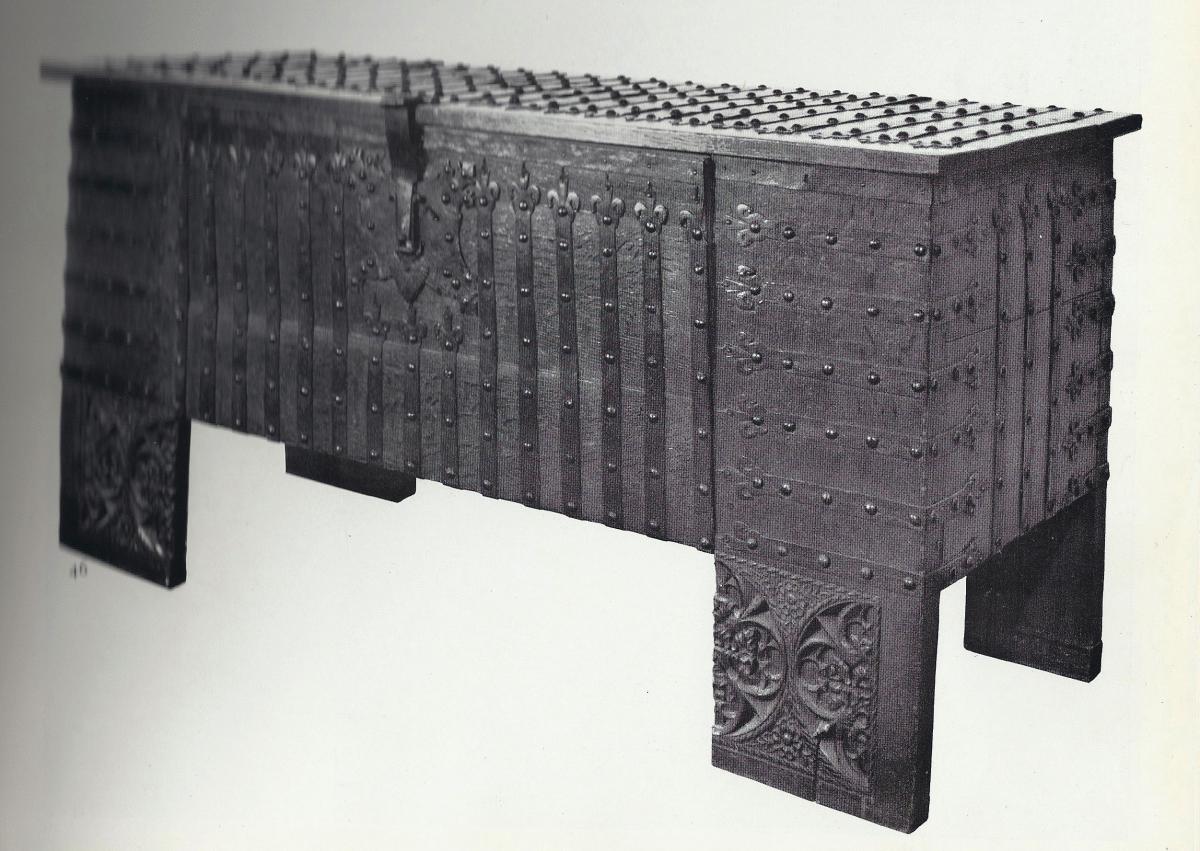 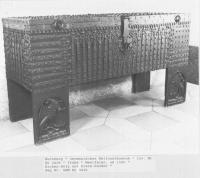 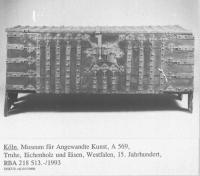 This standing chest is of clamp-front construction, extensively decorated with long, ironwork straps with quatrefoil finials which ‘wrap’ around it, and has an ornate, central lockplate, and front legs with full, height stiles.

The ironwork straps & finials are fixed with convex, headed nails: running along the front, five long straps; the two side straps; and the five straps on the top. On the chest front, centrally placed, is a large, iron lockplate with four outer, radiating spade finals in each corner and three, superimposed spade finials (a symbol of nobility) which are pierced with the initials ‘BB’.

The lockplate receives a corresponding, external hasp fitted to the lid. Below the floor of the chest, the two front stile legs retain most of their original height. The lid is supported by substantial iron strap hinges that extend right down the back of the chest. Inside the chest at the left end is a shallow, oak till.

Construction: The chest is of joined, 'clamp-front' construction, reinforced by the nailed, iron mounts. In total it uses ten, oak boards which were riven and planed. The back and front are each formed from a large single plank held to the full height stiles by long, pegged tenons.

The sides are also single boards joined into the stiles using long tenons held by dowels, and extend down below the chest bottom, concealing the ends of the bottom boards. The bottom consists of a single board cut into the sides and shallow rebates in the stiles.

The front and back boards are dowelled into the bottom boards. The lid which overhangs the sides has a narrow cleat at each end, and consists of one wide plank which has bowed a little as a result of shrinkage.

Ironwork: The wrought ironwork straps, lockplate, hasp and lock all appear all appear to be early, and of the same original manufacture and are fixed with convex headed nails. There is mild dark staining of the oak around the iron mounts, possibly because of low tannin content in the oak.

RELATED TO : No 900:2-1904 V&A Museum, London. Stadtmuseum Dusseldorf. Decorative Arts Museum Berlin. Museen Schleswig-Holstein & Hamburg. A related example featuring elaborately-carved feet and formerly in the Horsham Museum, West Sussex, sold at Christie's in 2010 for £97,250 and another example, again with carved feet sold at Sothebys in 2006 for £48,000.

This type of large oak standing chest is known as a 'stollentruhe' (studded chest) and is thought to have been made from at least the early-16th century, based on the style of ironwork and form of the front legs which tend to be carved on earlier models.

The German renaissance was established and Albrecht Dürer and Lucas Cranach the elder were famous throughout Europe. The type has become closely associated with the Westphalia region in central, western Germany (between the Rhine and Weser rivers, located north and south of the Ruhr River).

The great weight of this chest, the plain back, and decorative carving and ironwork indicative that it was essentially a static piece of furniture, combining large storage capacity and a reasonable measure of security with conspicuous display.

In addition to its impressive proportions and height off the ground (keeping the contents away from damp or dirty floors), its most showy aspect is the wrought and cut ironwork mounts. The multiple, iron straps fulfil a dual role: decorative but also reinforcing the structural wood joints.

Evidently such chests were intended to be secure: the timbers and hinges (a notorious weakpoint of chests) are notably robust. The central lock-plates on these chests are particularly impressive but in terms of security represent the weak point of the chest.

Geoff Egan has described medieval locks as ‘among the most complex everyday objects to have survived, although most have simple, easily-picked mechanisms, inside cases designed to look as robust and secure as possible’ (Egan, Late Gothic 1998).

In the same way as keys were displayed as a badge of status by officers of the household and women in renaissance Europe, ornate locks on doors and chests were part of a concern to draw attention to household wealth and its distribution on controlled terms.

Whatever the contents of such chests, they were a way to assert the authority of the owner. The pierced initials ‘BB’ indicate that this was made for a particular person and the use of the spade motif on the central part of the lockplate suggests that he or she was of noble status.

Function : Chests (of all shapes and sizes) were the most common form of furniture in late-medieval/renaissance households. Even poor households are likely to have had at least one, while the inventories of great households can list hundreds.

They were used to hold all manner of goods: coin, plate and personal jewels, clothes and textiles, vestments and chapel ornaments, muniments, books, arms and armour, lights, grain and bread. A practical disadvantage of large chests was accessing contents especially smaller objects at the bottom.

Most chests of any quality have a built-in, lidded compartment or 'till' across one or both ends. These must have been convenient for smaller valuables (and perhaps candles), and some were fitted with their own lock. Chests were conventionally placed next to beds.

They often contained valuable linen for the bed, but would also be close under the watchful eye of the owner.