A Chelsea Chinoiserie Group of a Mother and Child, Modelled by Joseph Willems 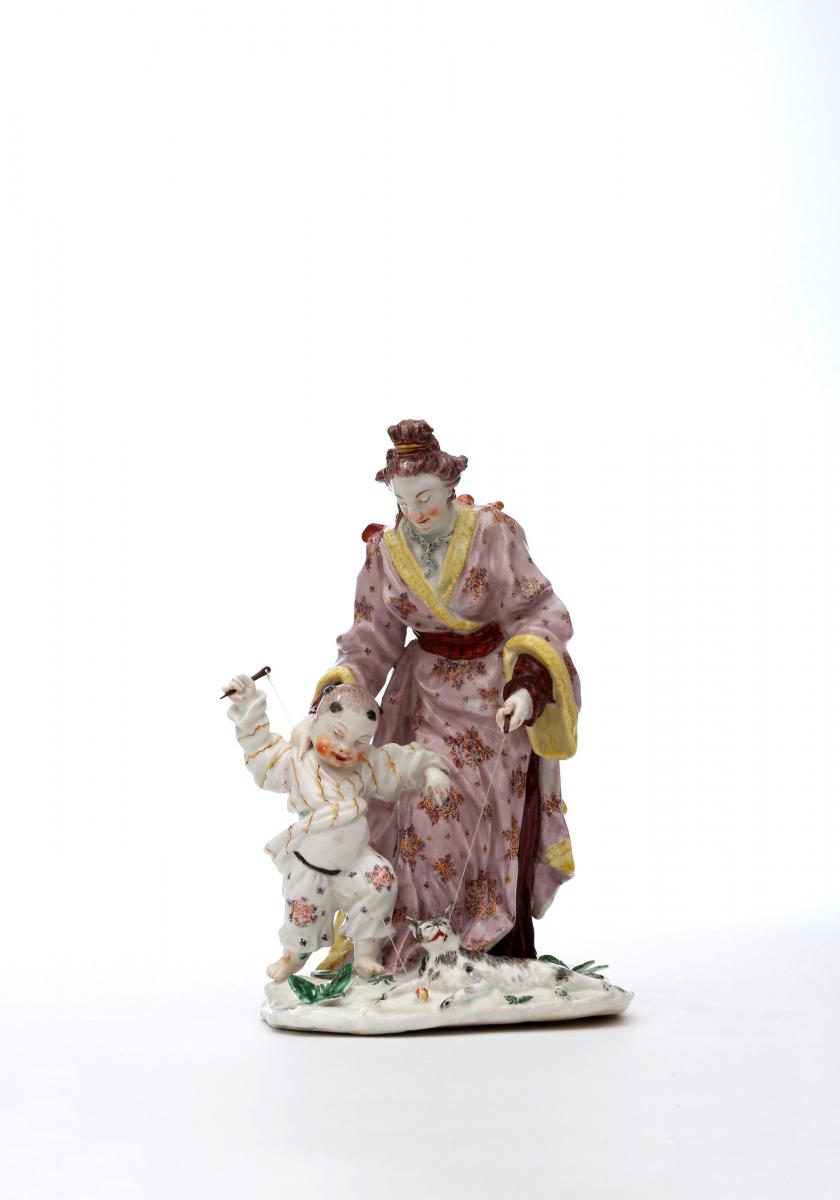 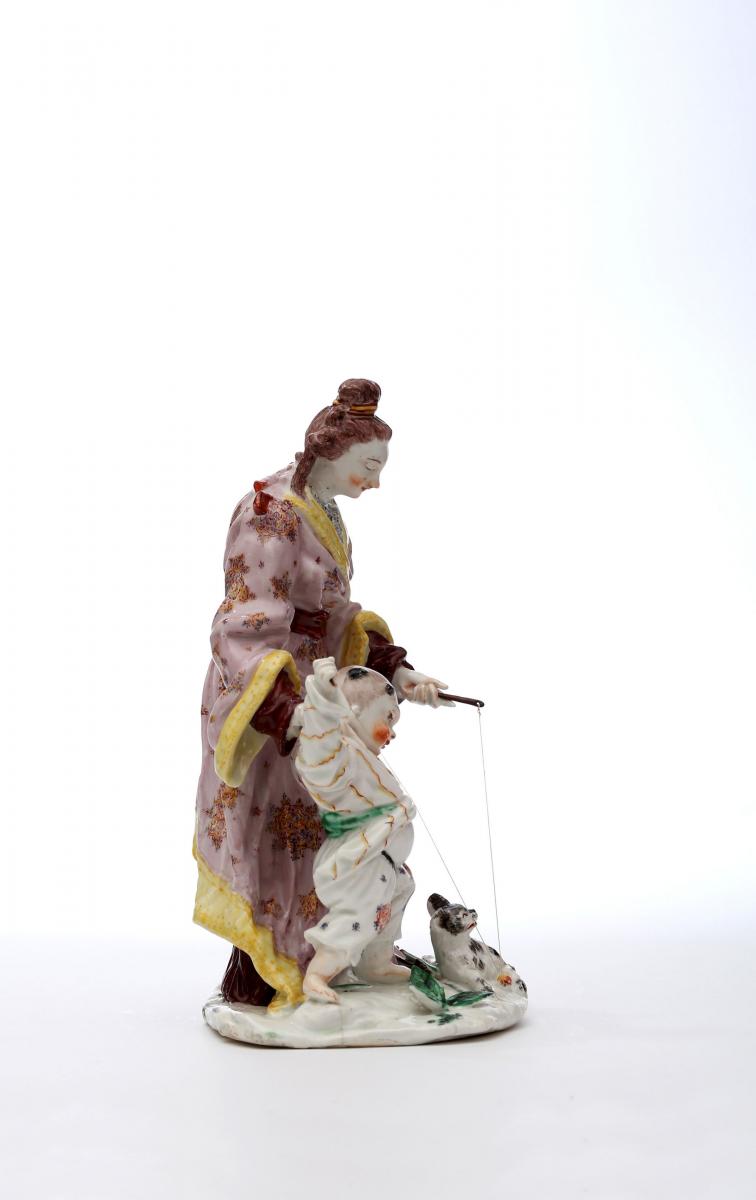 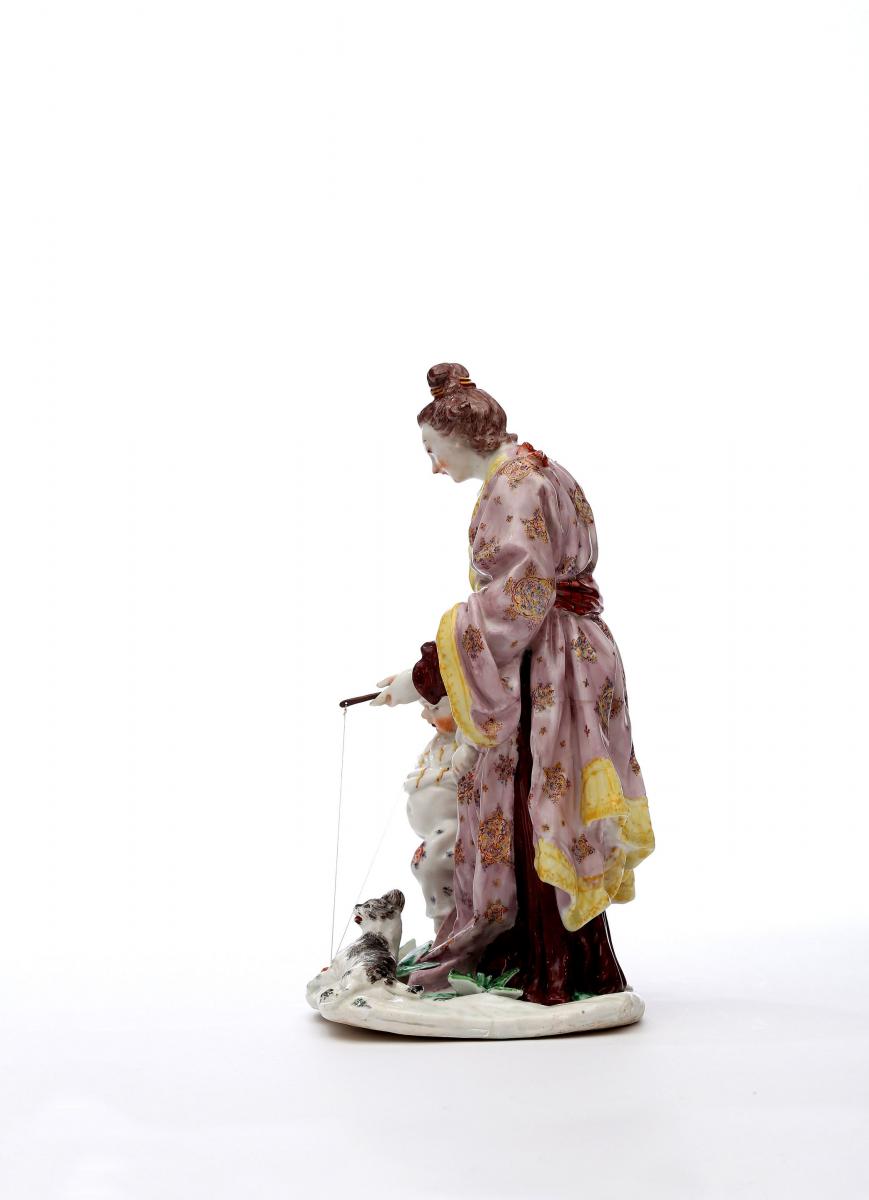 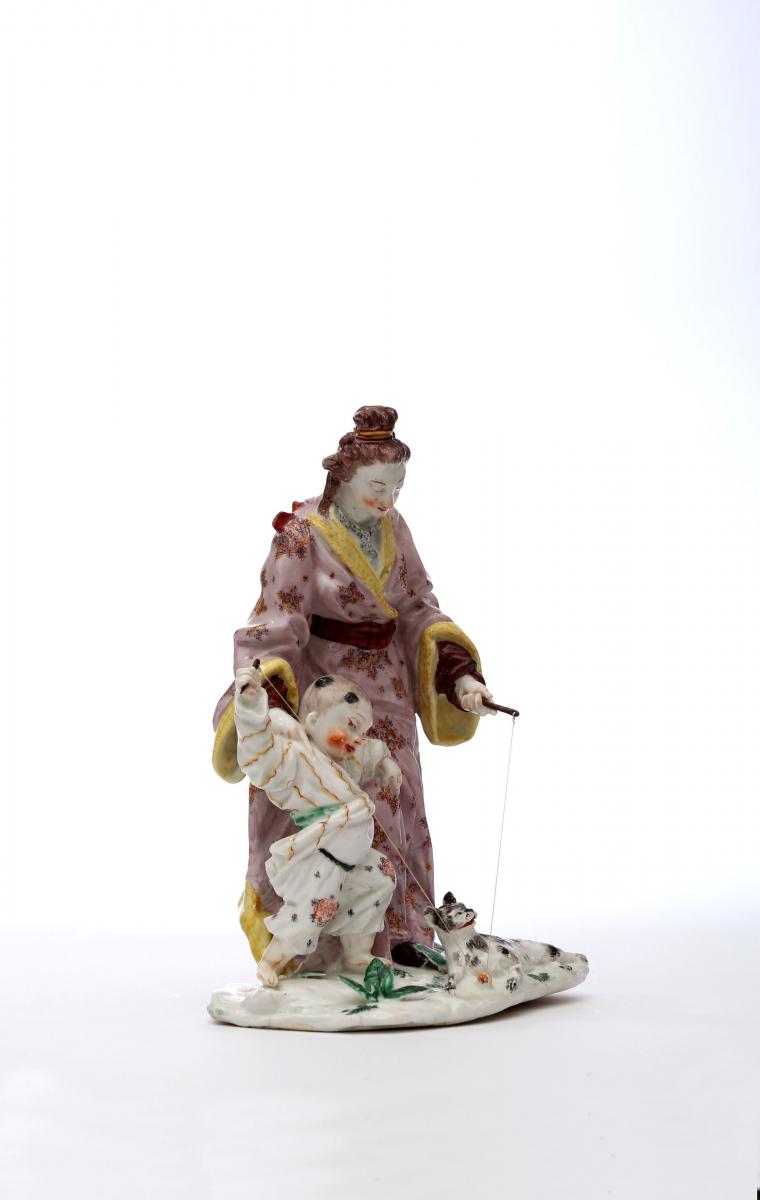 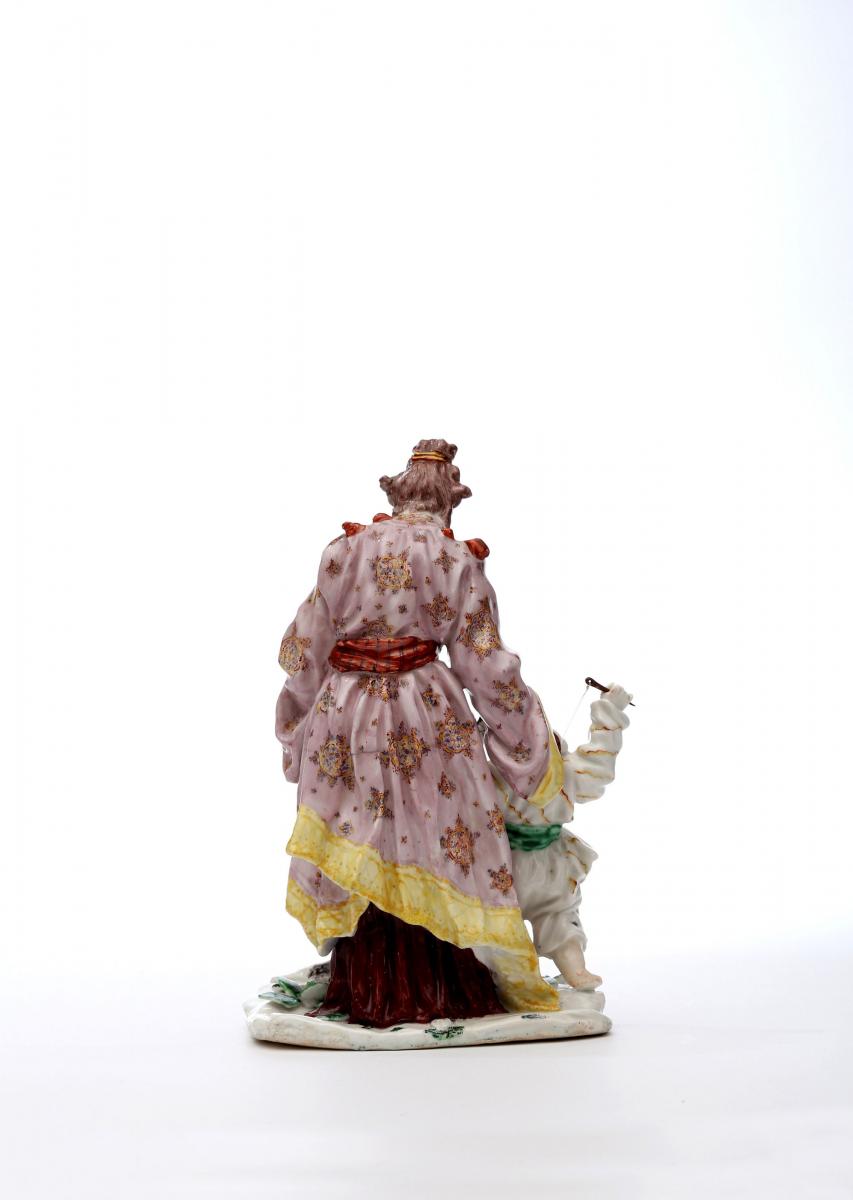 This group of a mother and child in Oriental costume playing with a kitten is perhaps the finest of Joseph Willems early works at Chelsea. Only one other example is known, an undecorated group in the Museum of Fine Arts, Boston.

In both groups, the child and attentive mother are holding the short handle of a diabolo or Chinese Yo-yo, a type of spinning top suspended on a fine cord, with which they tease the kitten lying prostrate on the ground at their feet.

From 1737, the European vogue for ‘le goût Chinois‘ was invigorated by prints with exotic and fanciful Chinese-style figures after François Boucher and others.

This early Chelsea model is after one of these, an engraving entitled ‘Le Mérite de tout pais‘, executed by the engraver François Antoine Aveline (1718–1787) and published in Paris.

It is from a set of six images after Chinese themes designed and drawn by Boucher; each plate is appended with verses, here, by Saderlet:

The engraving itself is not dated, but the set was used for the Tenture Chinoise tapestries made by the Beauvais factory in 1744, and shortly thereafter inspired production at the Vincennes porcelain factory.

While the rosy cheeked mother is almost directly after the print with her top-knot bound coiffure and voluminous robes, the small ruddy-faced boy with four black-painted tufts on his shaved head is the sculptor’s own clever invention.

Willems captures the toddler struggling to maintain his balance, actively engaged in the game and delighting at the cat’s annoyance.

Another significant variation is the implements used in the game, in the print only the mother holds a long baton, suggesting that it is a different toy.

The superbly painted details of the dress imitate embroidery in polychrome and gilt-metal threads, fur-trimmed collars, and striped silk.

There are parallels in the costume of the contemporary chinoiserie engravings of George Edwards and Matthew Darly, A New Book of Chinese Designs, London, 1754.

The enamel painting is characteristic of a small group of early Chelsea figures or animals with delicate moss on the bases executed in black washed with green, and the rich chocolate brown enamel seen on the skirt and sleeves of the mother.

These features are usually associated with William Duesbury, whose surviving account book, 1751-3, suggests he was instrumental in arranging such work from independent decorators.

The apparently unique pendant to this model is a polychrome Chelsea chinoiserie group with raised anchor marks made in two parts, one a mother and child, and the other a single kneeling child: both are in the Museum of Fine Arts, Boston, acc. nos. 30.328 and 30.323.

This two-part model is closely based on another print from the same series after Boucher, ‘Les Délices de l’enfance‘, engraved by Jean Joseph Balechou (1716–1764). Both porcelain groups appear to be painted by the same hand or at least from the same workshop.

These chinoiserie groups are highly important in the history of the development of porcelain sculpture at Chelsea. From the late 1740s, Meissen porcelain figures were increasingly appearing on the London market.

Arthur Lane, who described these chinoiseries figures as “highly impressive” identified them as the work of Joseph Willems, a sculptor who had arrived from Tournai in 17484.

Chelsea desperately needed to be at the forefront of European design and establish their own distinct style to compete with Meissen. Clearly, by December 1750, when an auction advertised ‘Curious Dresden and Chelsea figures’ for sale, they were making great strides.

Significantly, in this early period, Chelsea’s finest figures were not slavish copies of Meissen models, but original sculpture translated from a variety of engraved sources, many after Boucher.

Where and how Sprimont and Willems procured these fashionable prints is not known, however, many were engraved by the Parisian Simon François Ravenet (1706-1774), who emigrated to London around 1750.

Coincidentally, the Meissen factory produced several models after the same print source a year or two earlier. The aesthetics are completely different.

While the German groups are more polished, they lack the verve and originality of the Chelsea groups, where one can almost feel Willems’s creative genius at work, as he transcribes the two-dimensional printed image into three-dimensional clay.

Literature:
Arthur Lane, ‘Chelsea Porcelain Figures and the Modeller Joseph Willems’, The Connoisseur, May 1960, fig. 11, where it is dated 1751-2

Illustrated:
Bellamy Gardner, ‘An Early Chelsea group with raised anchor, Apollo, XXIX, January 1939, pp. 32-4, Fig. 1, where the polychrome group is illustrated alongside its pendant group, now in the MFA, Boston.

The base broken into several sections with associated firing cracks. The mother broken through the knees, neck and hands, one finger missing. The boy intact but detached. Some of this happened in the firing and there is evidence of original factory repairs. The only missing pieces are: one finger missing on the mother, both playing sticks. Six tips of leaves missing and cat’s ears chipped. The raised anchor mark at the rear has been partially fractured due to a kiln flaw, which occurred during firing. Some extensive damage with original factory repairs.
Enquire via Email