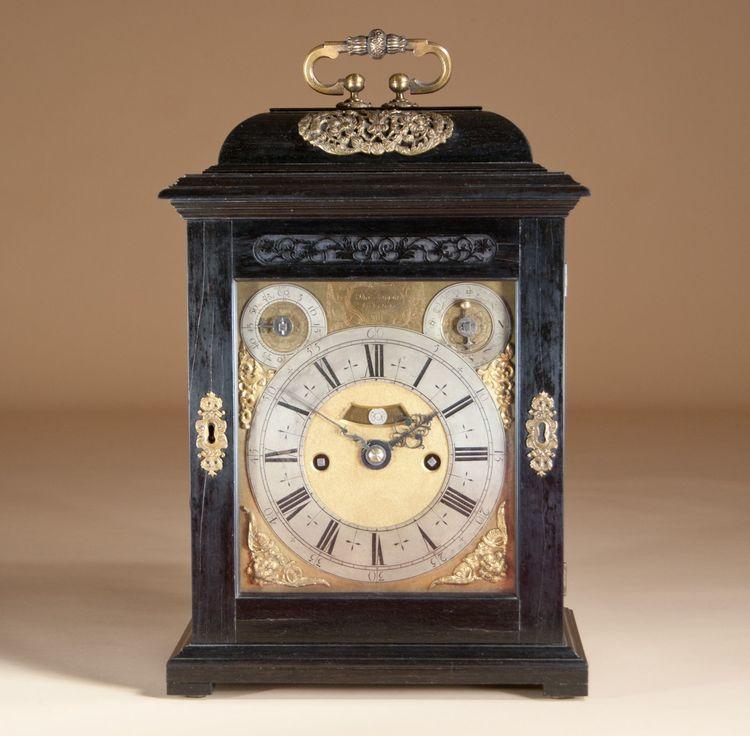 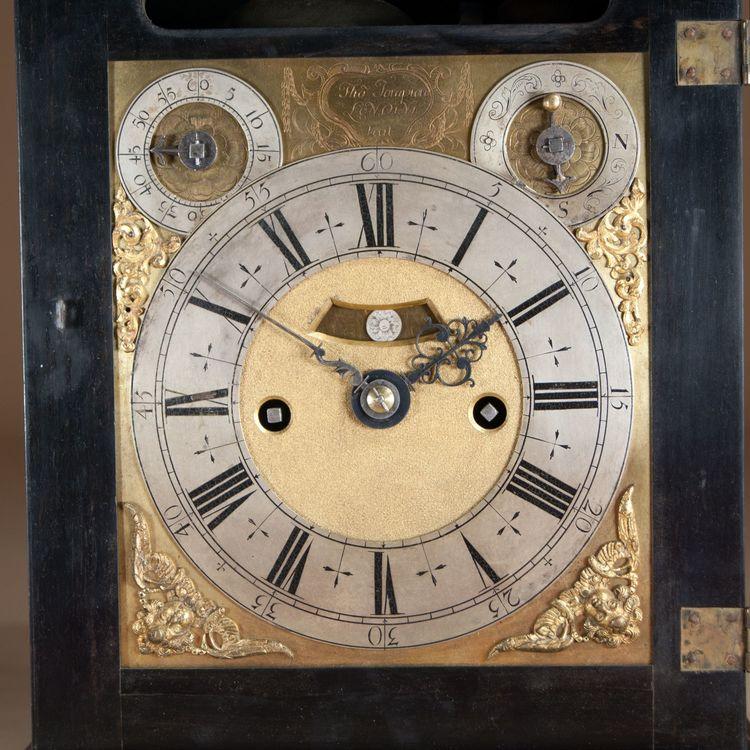 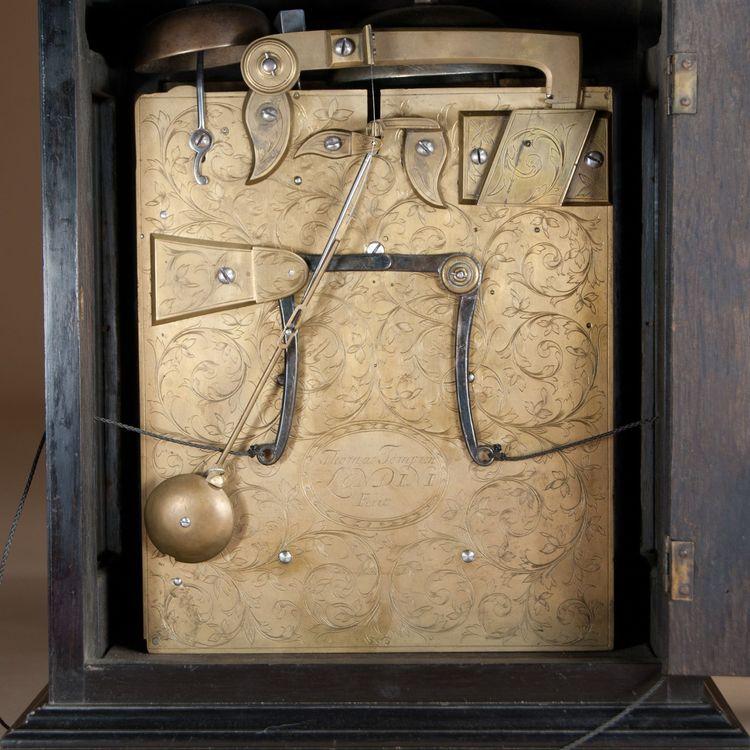 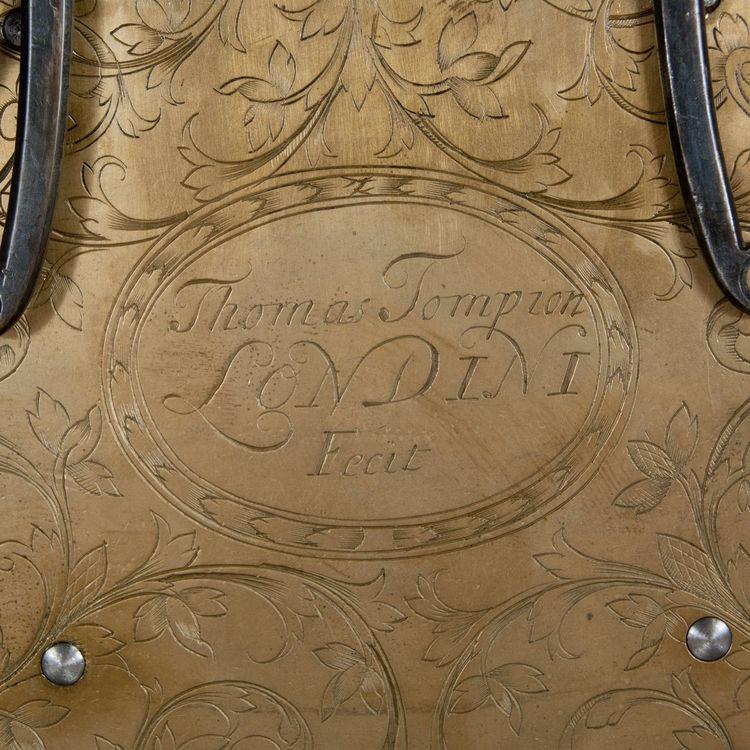 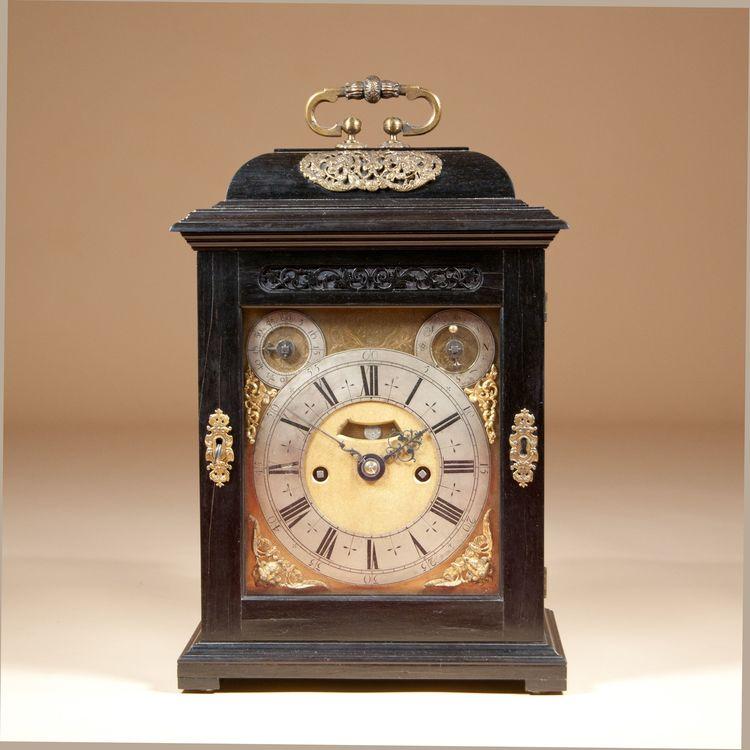 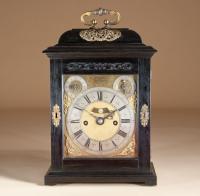 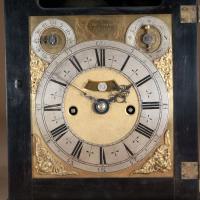 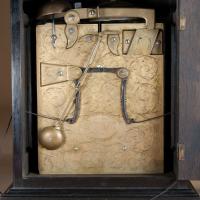 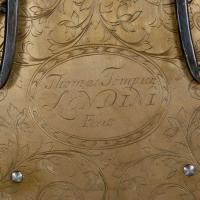 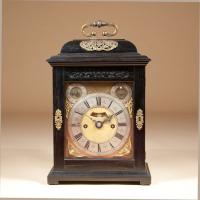 The custom made ebony case with a caddy top surmounted by a tied bud handle over applied gilt brass foliate mounts, complex entablature moulding and with pierced sound frets to the door and sides; raised on a shallow plinth base and block feet.

The 8-day two-train striking movement with pull-quarter repeat, activated from the right or left side by a pair of steel levers - a noted Tompion feature.

The rectangular dial has two subsidiary dials in the upper corners above the chapter ring: one on the left for rise and fall pendulum adjustment and engraved in Arabic five-minute divisions with an arrow-headed pointer;  the other, on the right, with strike/not strike function activated by a steel arrow with brass pommels, with engraved floral motif within each silvered ring.

Winged cherub spandrels are at the lower corners and foliate spandrels are set between the chapter ring and the subsidiary dials., which are flanking a signature cartouche in the center.

The silvered chapter ring with Roman and Arabic numbers and enriched by 'wheat sheaf' half-hour markings and inner quarter-hour markings, all surrounding a finely matted ground with mock pendulum crescent with chamfered edge in the upper ground.

The backplate is profusely engraved with scrolling leaf sprays and centers an oval with Tompion's signature, "Thomas Tompion / Londini / Fecit".

Thomas Tompion is regarded as the finest of English Clockmakers.  He was born in Ickwell Green, Bedfordshire in 1639 and moved to London Circa 1670.

There he met Dr. Robert Hooke, the famous scientist, architect and mathematician who first mentions Tompion in his diaries in April 1674, the same month that Tompion became free of the Clockmakers Company.

Hooke brought him to the attention of Charles II who was an early horological enthusiast and Tompion supplied a spring watch to The King in 1675.  Further highly important Royal and Noble commissions were to follow and in 1703 he became Master of the Clockmakers' Company.

Tompion began his numbering system in the early 1680s and it was carried on after his death in 1714 by his business partner and fellow innovator, George Graham. They are both buried in Westminster Abbey.