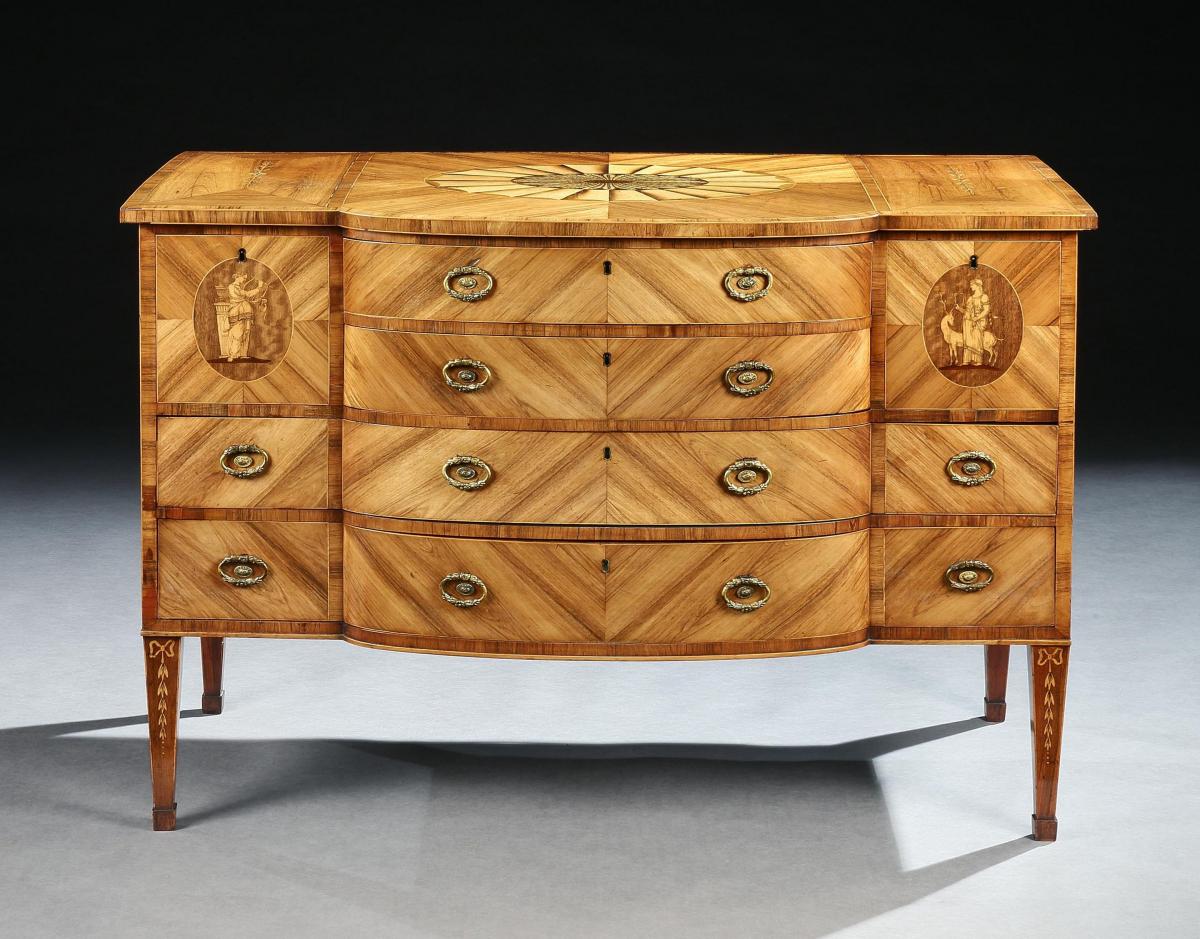 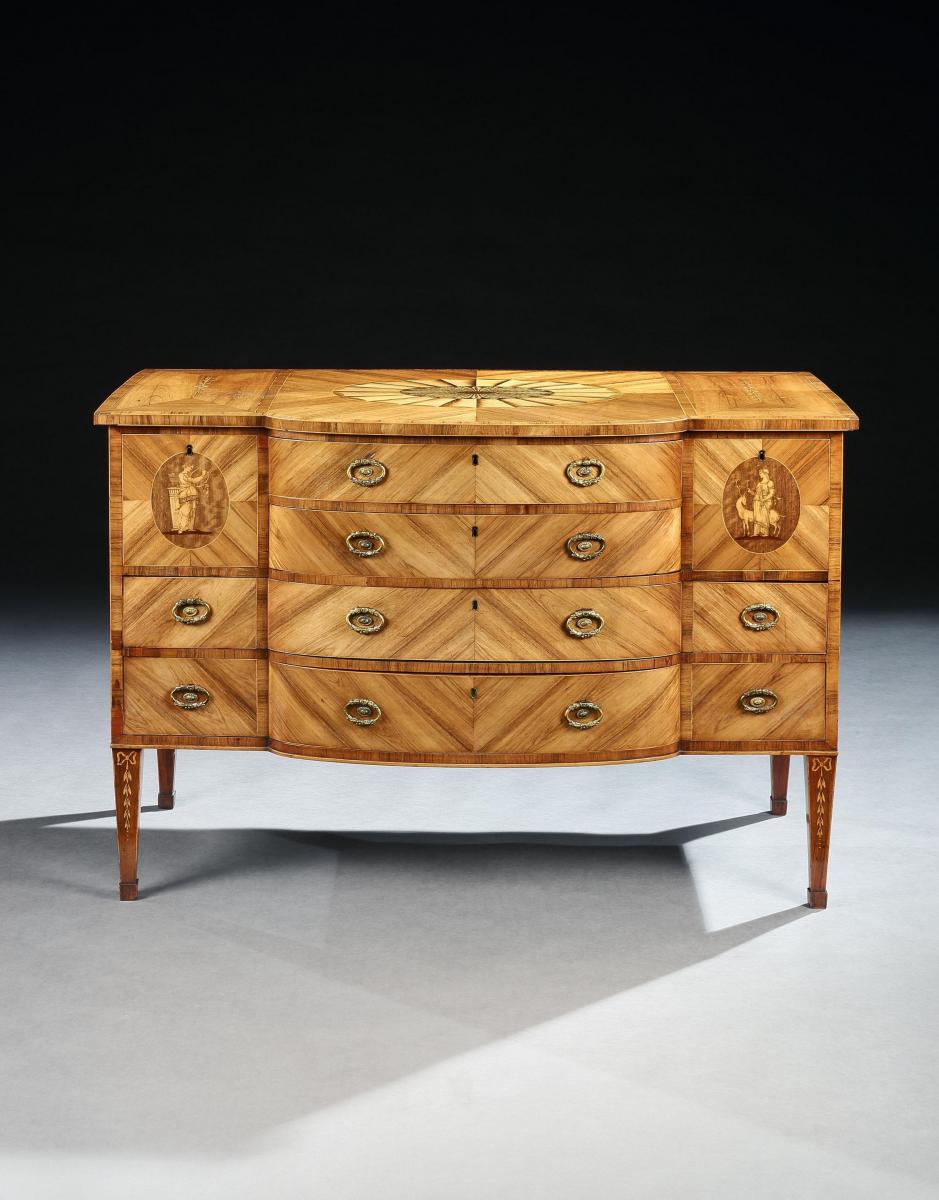 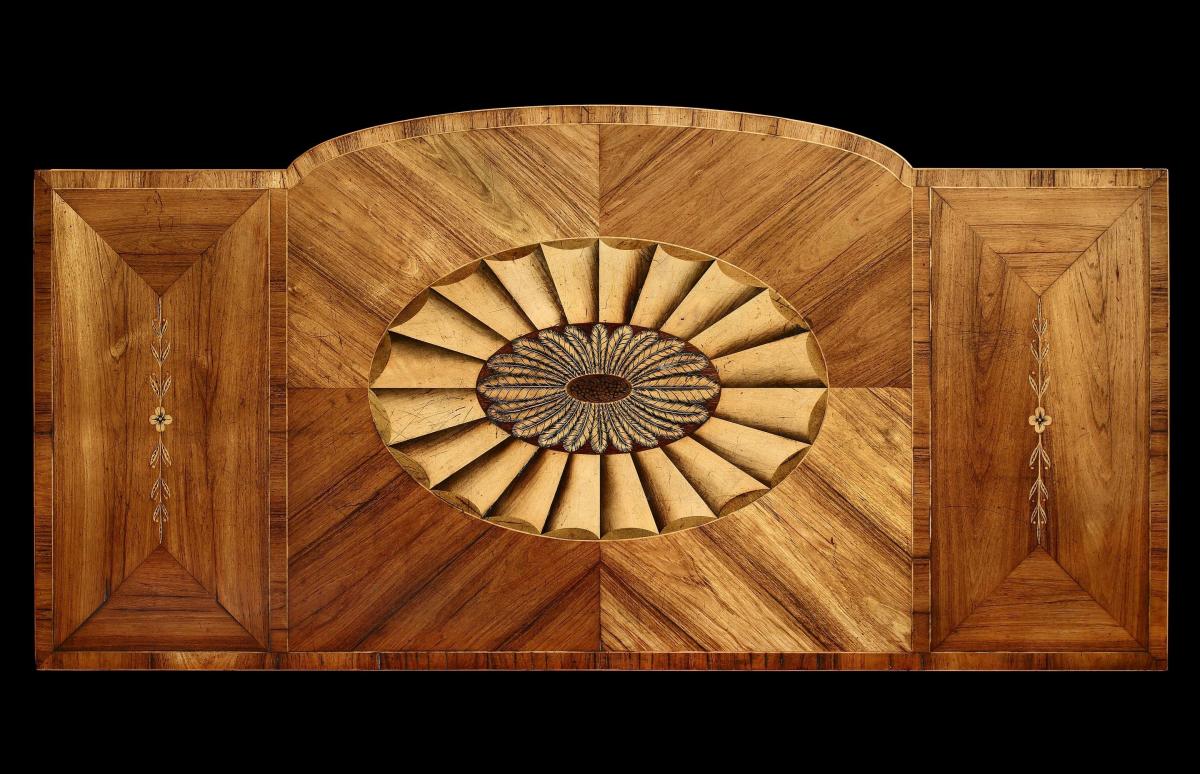 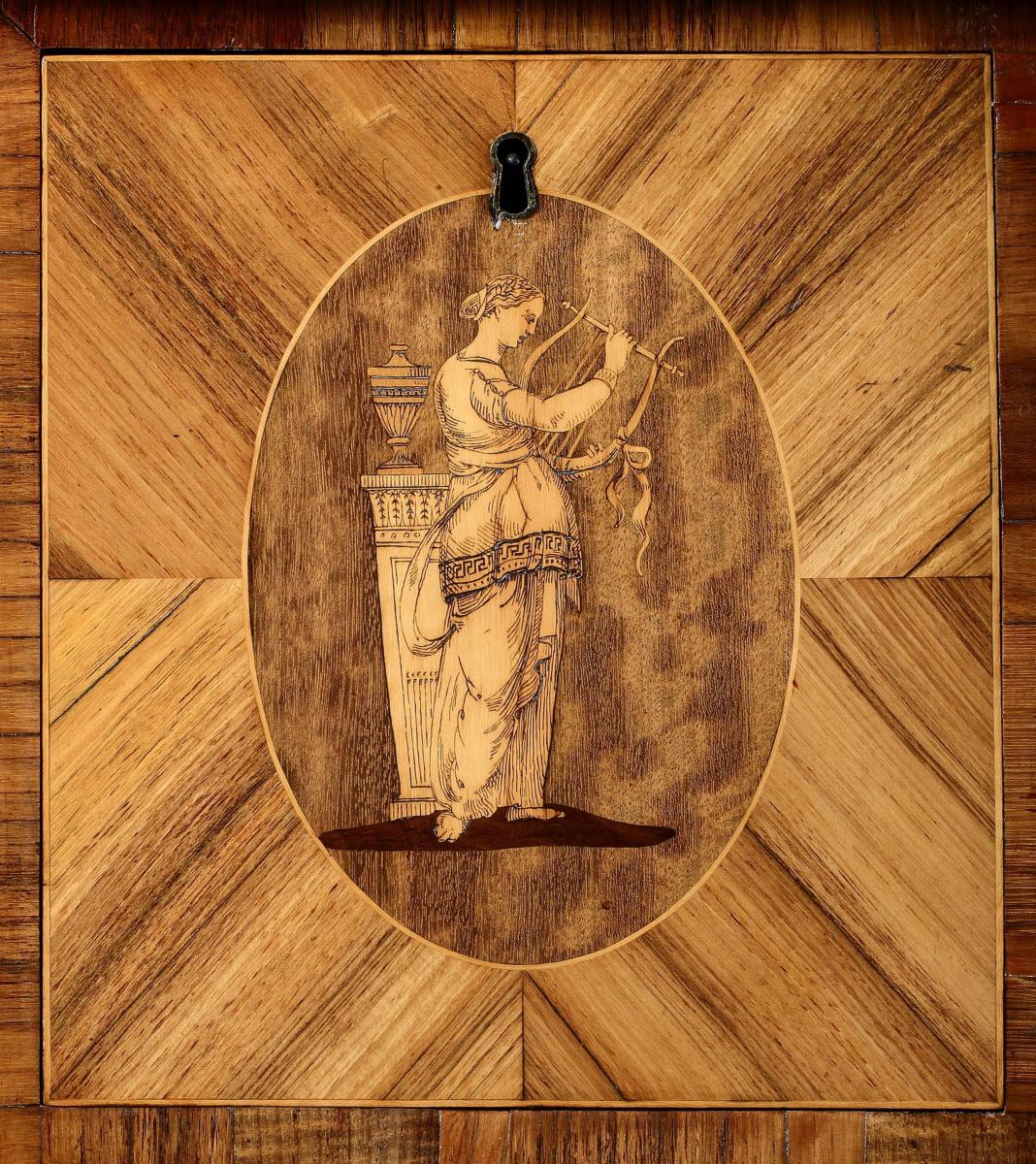 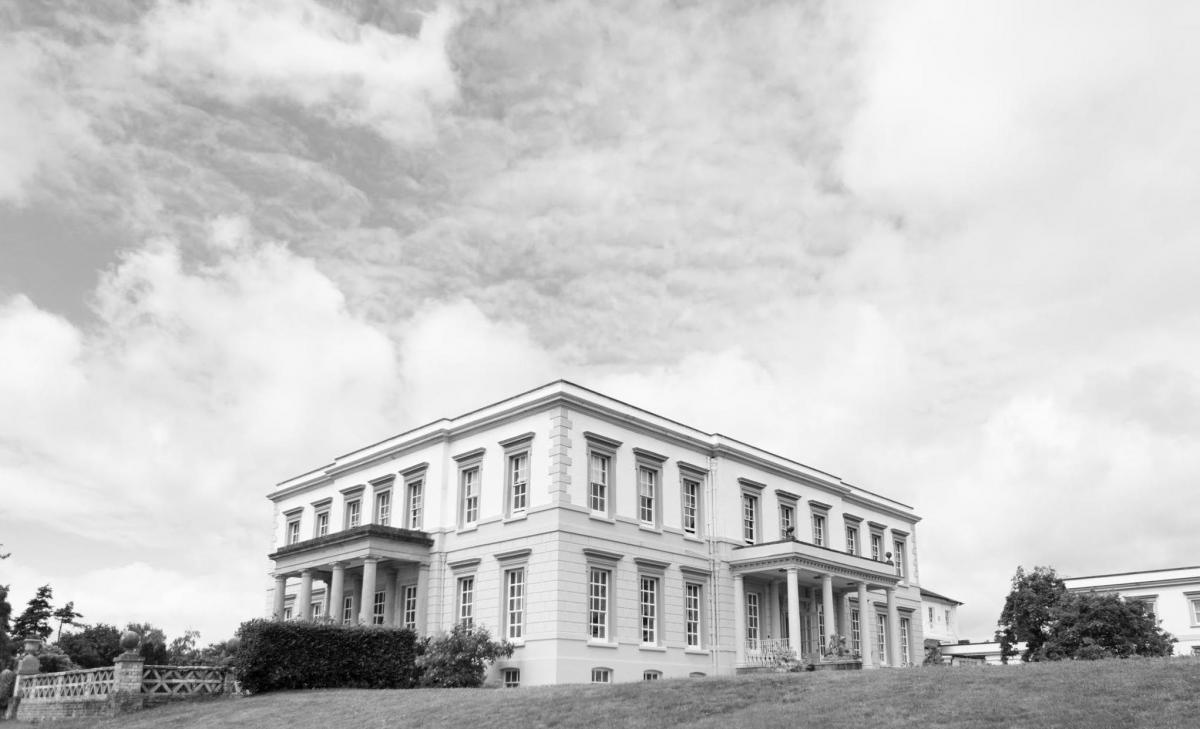 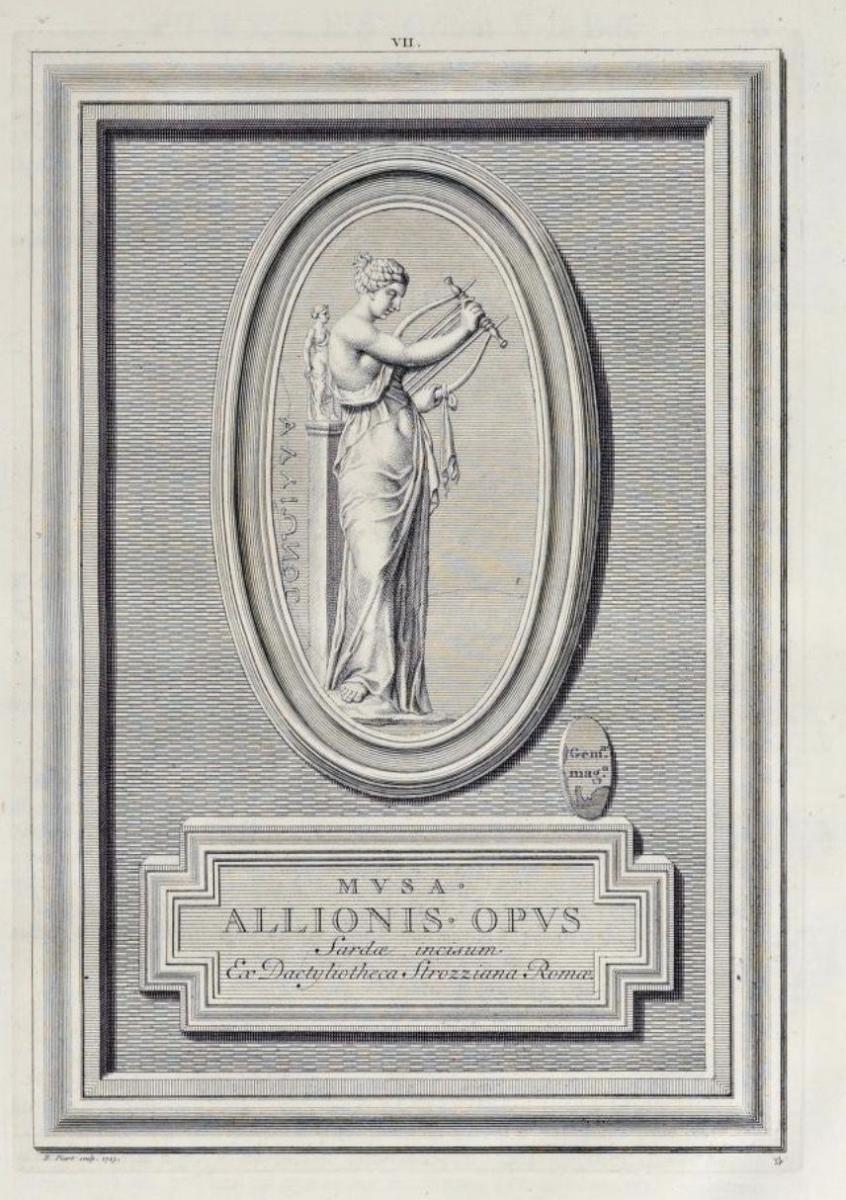 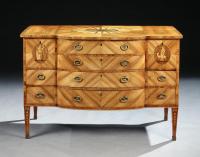 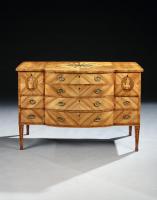 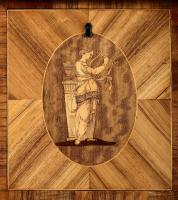 The whole standing on square tapering legs inlaid with tied bell flower chains and spade feet. With ormolu wreath handles. Of exceptional colour and patination throughout.

Basil and Nellie Ionides for the Saloon at Buxted Park, Sussex
Thence by descent

This outstanding commode formed part of the collection of Basil and Nellie Ionides. The Ionides lived at Buxted Park, Sussex, and this commode was part of the furnishings of the Saloon. Although there were several auctions of the Ionides’ collection, this commode has remained in the family until now.

Nellie Ionides
Nellie Ionides (1883-1962) was the daughter of Sir Marcus Samuel, 1st Viscount Bearsted, Chairman and co-founder of the Shell Transport and Trading Company. A friend of Queen Mary, Nellie married Major Walter Henry Levy in 1902, but he passed away in 1923.

As a young widow, Nellie was introduced to the architect Basil Ionides (1884-1950) by the esteemed furniture historian, Margaret Jourdain, who suggested that Ionides decorate Nellie’s London townhouse at 49 Berkeley Square West. Basil was a renowned figure in his field known for his distinct Art Deco style and bold colour schemes. In 1930, Nellie and Basil married.

Both Nellie and Basil had a passion for the arts and were avid collectors. Their Berkeley Square townhouse became museum-like, with impressive displays of porcelain, art, and furniture. The couple was considered to be among the most prominent and significant 20th century British collectors of the decorative arts.

Buxted Park
Buxted Park was originally built, circa 1725, for Thomas Medley, a descendent of the family who had been keepers of the Privy Purse during the reign of Henry VIII. Medley was a barrister who made a fortune introducing the English to port wine during the war against France.

Buxted passed to the Rt. Hon. Cecil Jenkinson Bt., later Lord Liverpool (1784-1851), when he married Medley’s granddaughter. The Prince Regent and Queen Victoria both made visits to Lord Liverpool at Buxted.

In 1931, Nellie and Basil Ionides acquired Buxted Park, and they transformed the house into a showcase of their celebrated collection of 18th century and Regency furniture, paintings, oriental and Meissen porcelain, enamels, and clocks.

A fire broke out in 1940 that destroyed much of the contents of Buxted including pieces that had been removed from Berkeley Square during the second World War to the safety of Buxted.

Basil set out to rebuild Buxted to its former glory, and after the Blitz he visited bombed-out buildings to salvage architectural elements that he incorporated into the renovation. The entrance hall contained a fireplace from 19 Arlington Street while the doors came from Nos. 23-25 Portland Place that had been designed by Robert Adam.

After the renovation, the Ionides entertained lavishly at Buxted Park and even welcomed Royal guests including Queen Mary and Princess Margaret. In his three-part article for Country Life in 1950, Christopher Hussey wrote that Buxted was a:

reincarnated phoenix, though docked, on its crest, endowed with a new and ingenious tail, and decked with plumage that is, preforce, borrowed, can be pronounced an even more interesting and attractive bird than the late lamented.

The Ionides Collection
In her will, after her death in 1962, Nellie Ionides left the family’s collection of Chinese porcelain to the Victoria & Albert Museum, the British Museum, and Brighton Pavilion.

She left Riverside House and the adjoining property, the Octagon Room (all that was remaining of Orleans House), to the people of Twickenham, where her collection of topographical paintings and prints of Thameside, Twickenham, and Richmond remain on permanent display.

Sotheby’s held auctions of the Ionides collection in 1963. However, her beneficiaries kept this commode along with several other pieces.

The Design
The commode reflects the skill and decorative features of the leading cabinetmaking firm, Mayhew and Ince. John Mayhew (1736-1811) and William Ince (1737-1804) ran their successful workshop in London originally from Broad Street in Soho and later from Marshal Street in Carnaby Market near Regent Street. The unusual and luxurious choice of a tulipwood ground is characteristic of the firm’s appreciation of exotic timbers.

The panels on drawer fronts reflect themes of music and hunting, which were classical subjects often selected as decoration for the most sophisticated commodes of the period, and presumably intended to reflect the passions of the original commissioning client. The music panel depicts the muse Erato and is based on a gem engraved by Bernard Picart for Philip von Stosch’s Gemmae Antiquae Caelatae (1724), pl.VII.

The distinctive oval drop handle handles with an independent central paterae are of a type traditionally associated with Gillows of Lancaster and London, run by patriarch Robert Gillow (1704-1772) and his son Richard Gillow (1733-1811).

There was indeed likely to have been some form of relationship between Mayhew & Ince and Gillows. Thomas Gillow (1736-1779), Richard’s cousin, resided at the Lock & Hinges in Marshall Street, conveniently just three doors away from Mayhew and Ince.