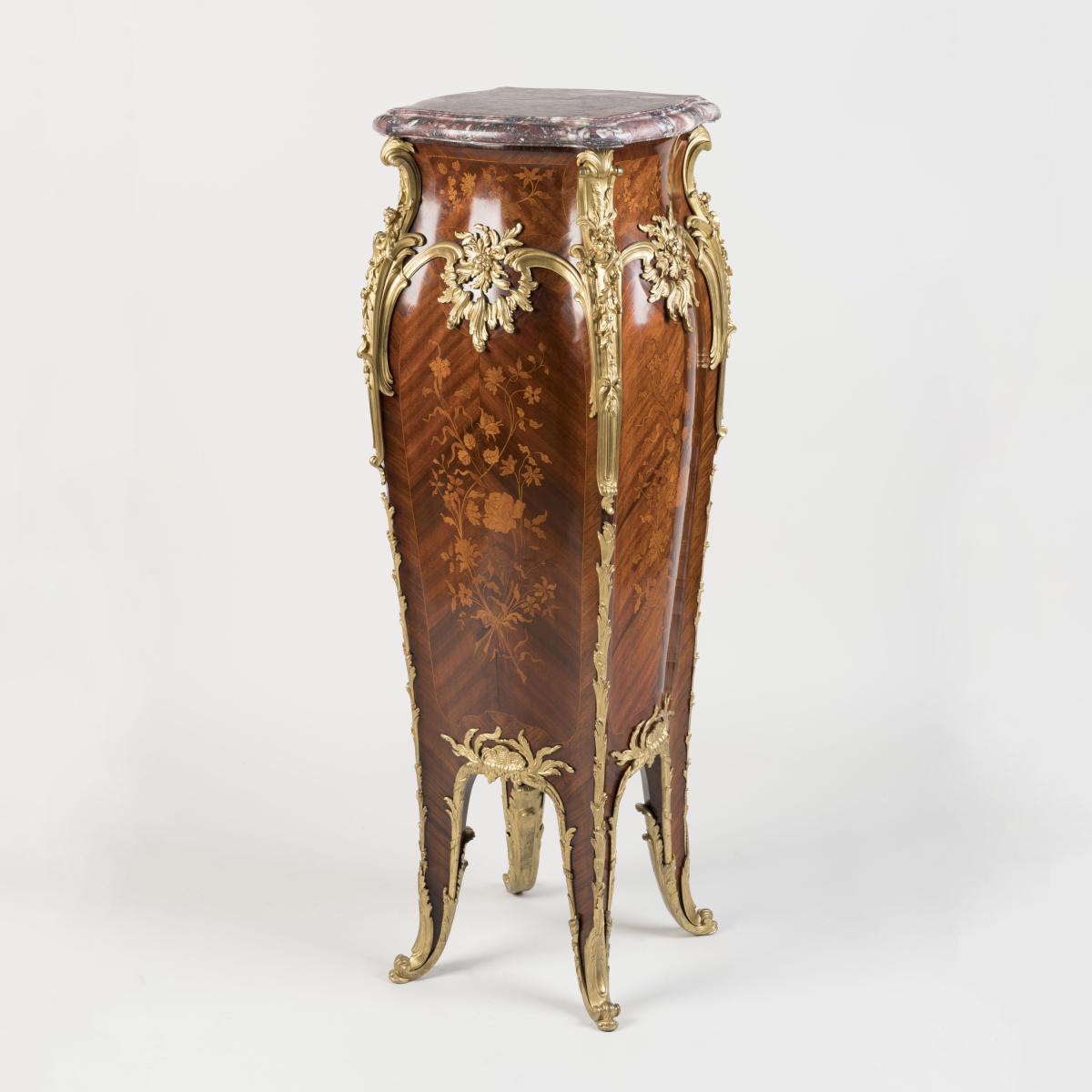 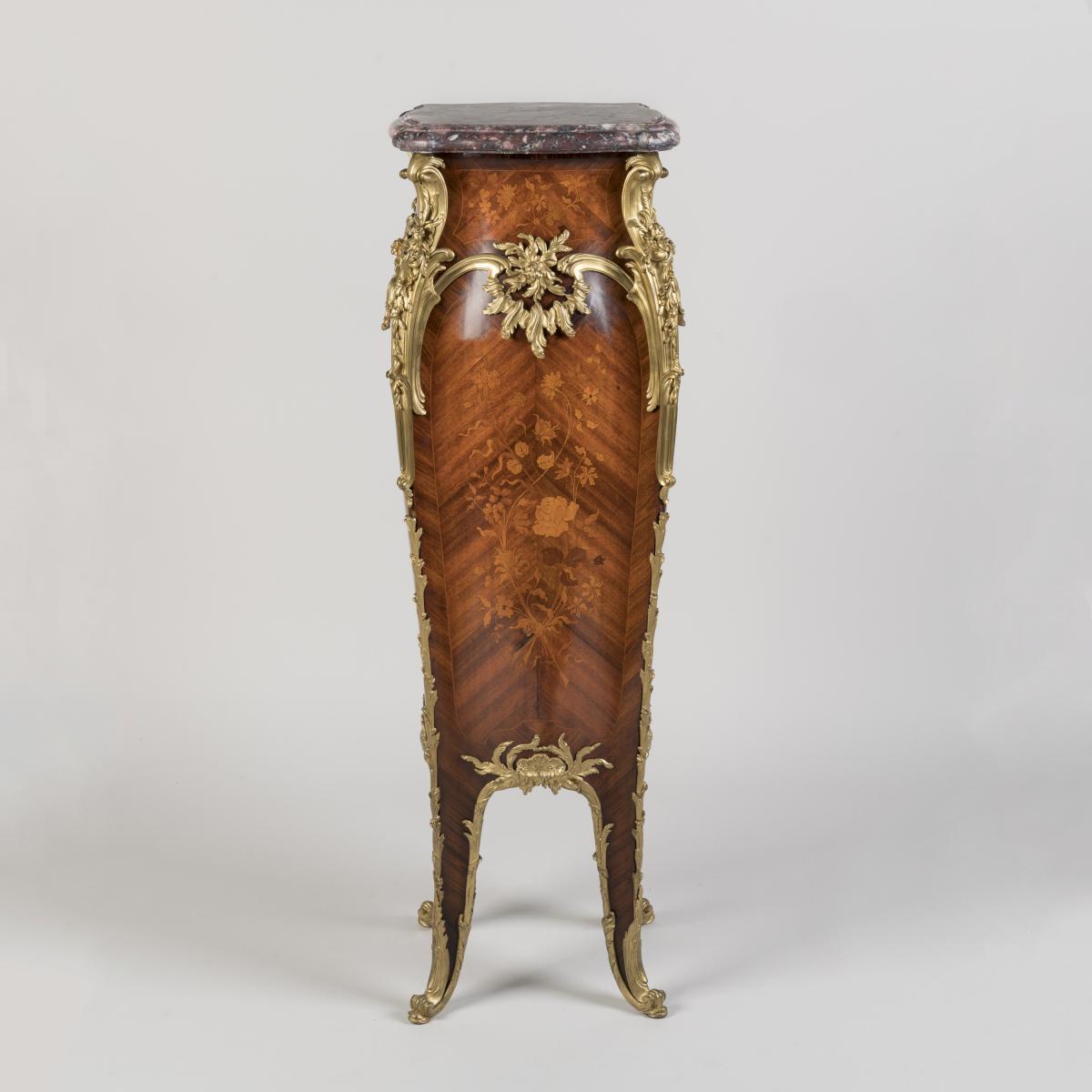 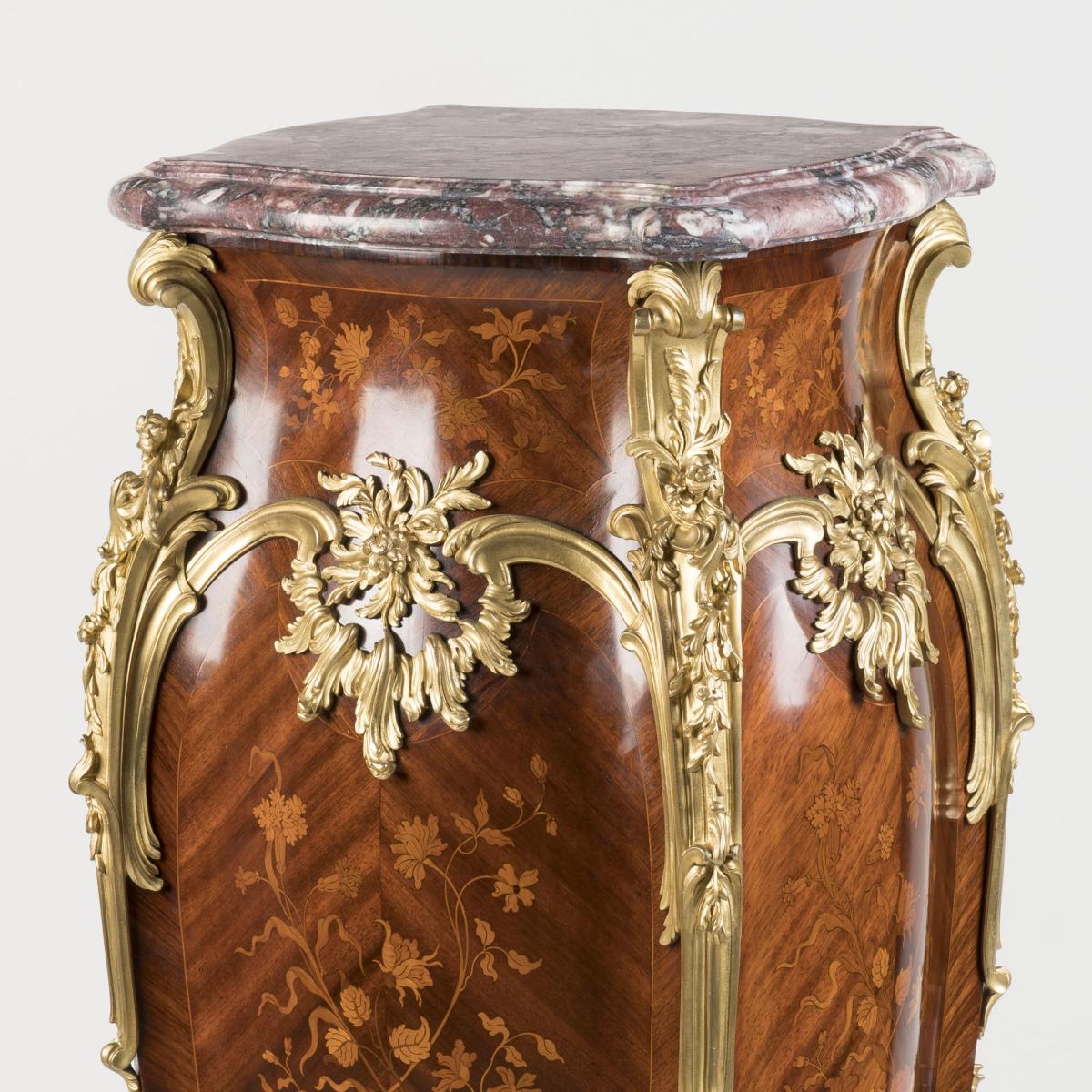 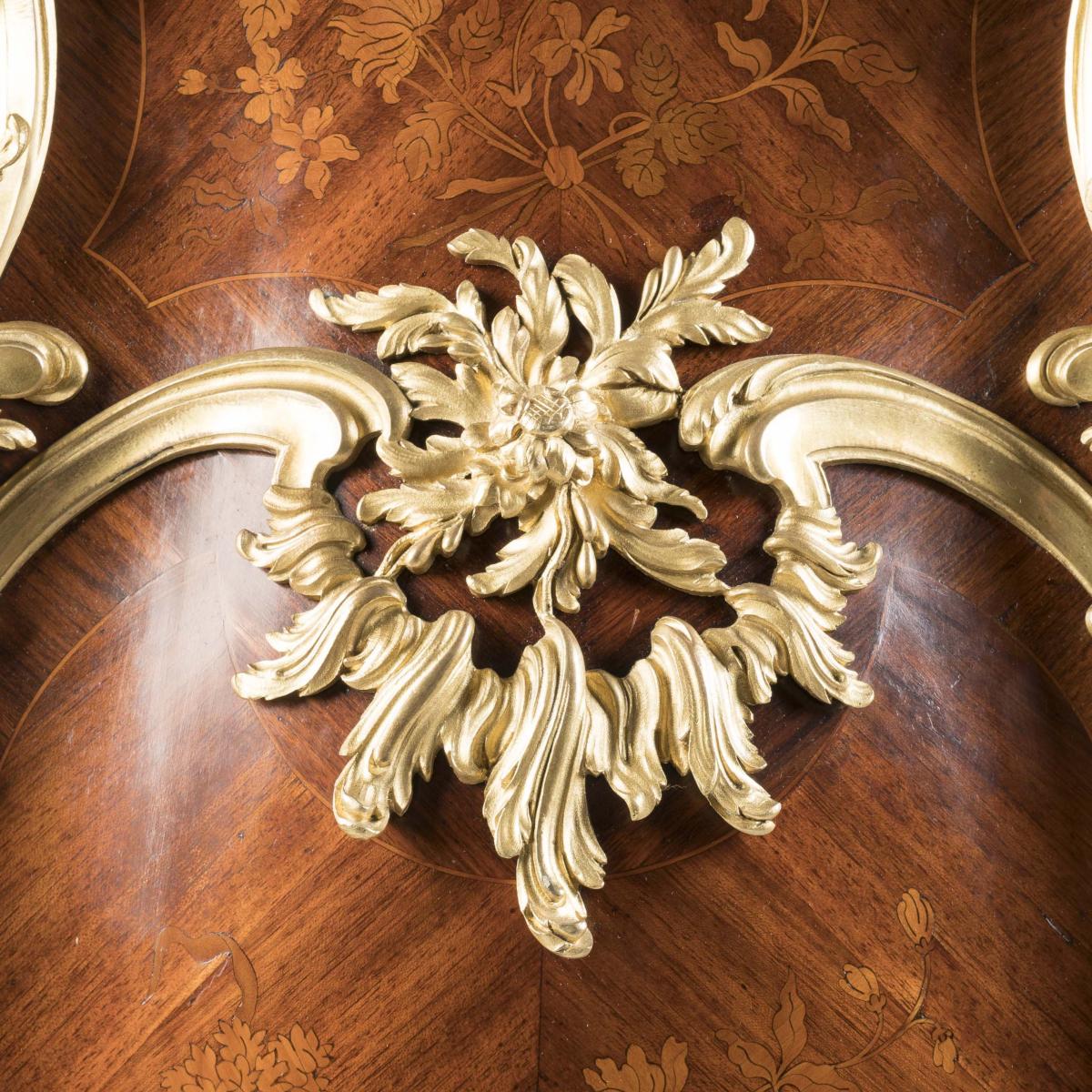 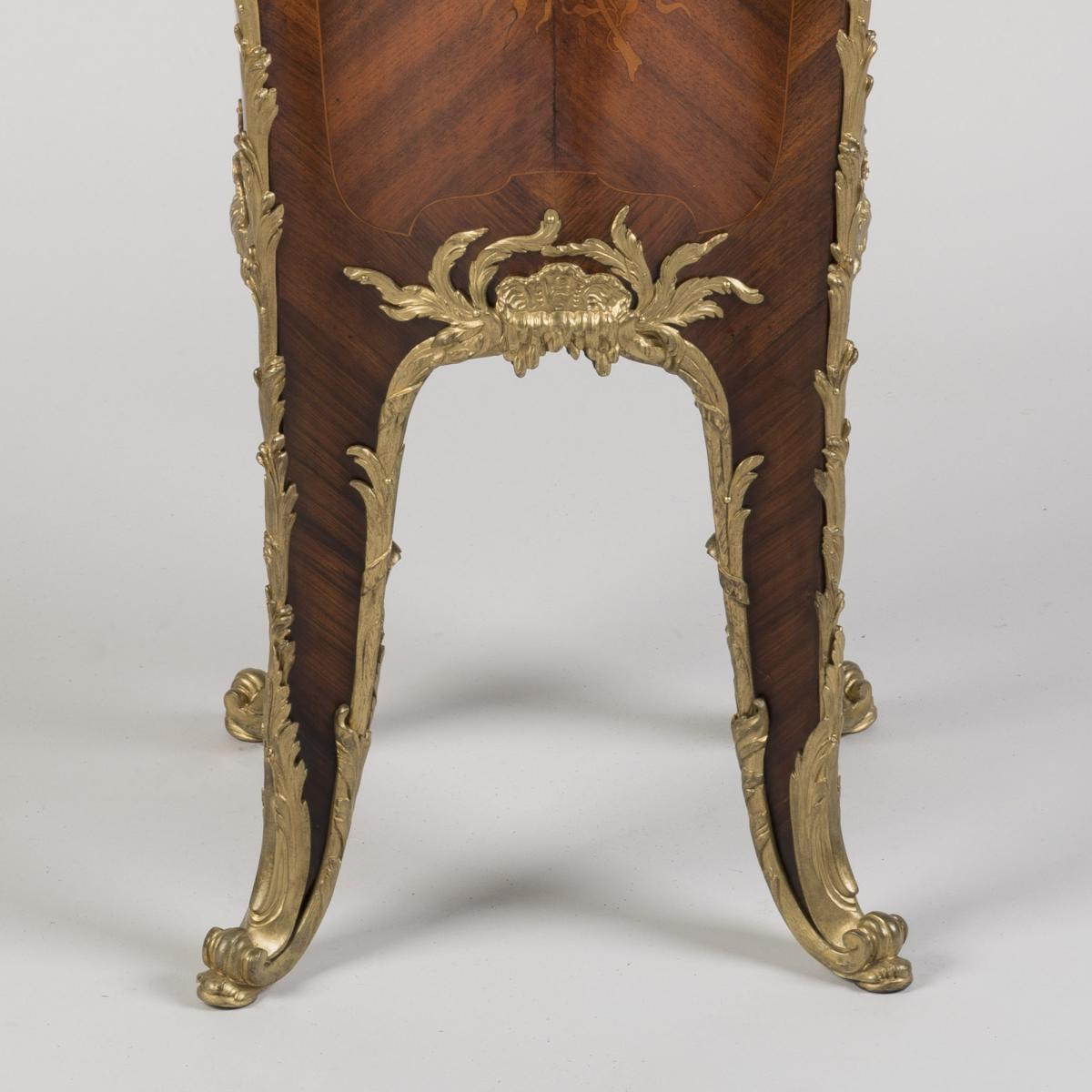 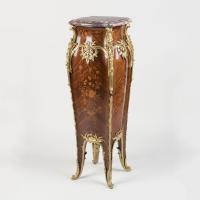 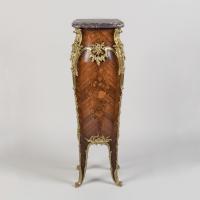 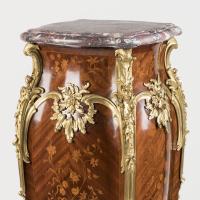 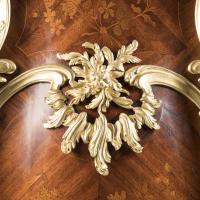 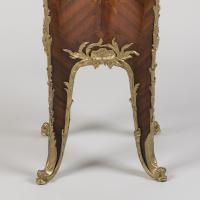 Of elegant bombé form with bookmatched kingwood crossbanding and floral marquetry to all sides on a bois satiné ground, the corners dressed with foliate scrolling ormolu mounts terminating in acanthus sabot feet; each side adorned with a central bronze cast floral mount; surmounted by a brèche violette molded marble top. Signed by the maker in the bronze; and bearing the marque au fer.

Known as the ‘Grande gaine Louis XV a 4 faces bois de violette marqueterie de couleur,’ index no. 184, in the Linke archives, this pedestal is one of only four made between 1895-1910. His annotations dated 17 April 1895 instructs the use of fleur de pêcher marble, although he was considering the use of the more expensive brèche violette. The two later examples of 1903 & 1910 also had the cheaper fleur de pêcher tops, meaning this pedestal is one of the first two made, circa 1900, and the only known example with the more expensive brèche violette.

François Linke (1855-1946) is considered to be one of the finest ébénistes and bronziers of the nineteenth century at a time when the worldwide influence of French fashion was at its height. He moved from the Pankraz region in Bohemia, where he had trained, to Paris in 1875, setting up shop in 1881 in the Faubourg Saint-Antoine and later with a showroom in the Place Vendôme, arguably the capital’s most fashionable address. He attracted a wealthy international clientele, appreciative of the excellence of his work.

Specialising in the style of the ancient regime, and modifying the proportions of the eighteenth century to suit the smaller Parisian apartments, he was an exhibitor at the Paris Exposition Universelle of 1900, where he was a Gold Medal winner par excellence for his extraordinary and innovative display. His worldwide reputation as a master of high individualism and inventiveness earned him the highest distinction of France, the Chevalier de la Légion d’Honneur. 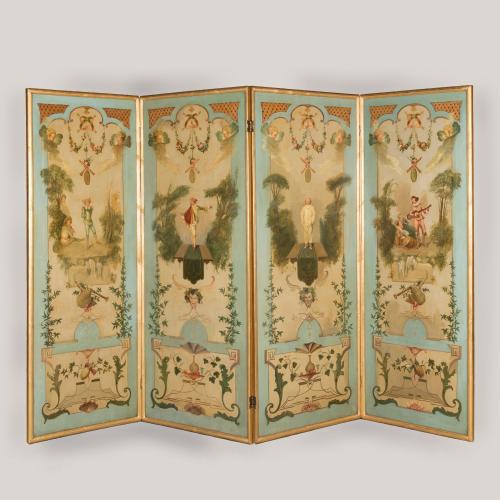 A Painted Four-Fold Screen In the Rococo Manner
Butchoff Antiques 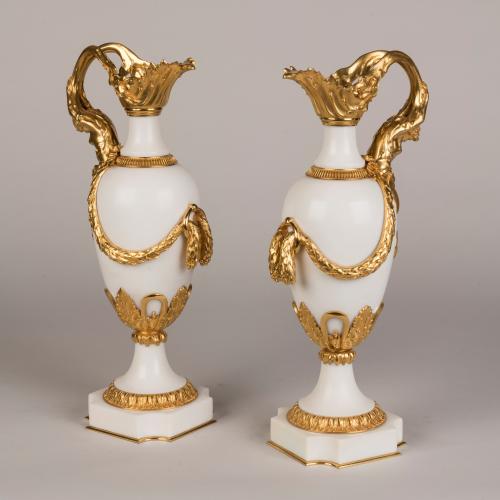 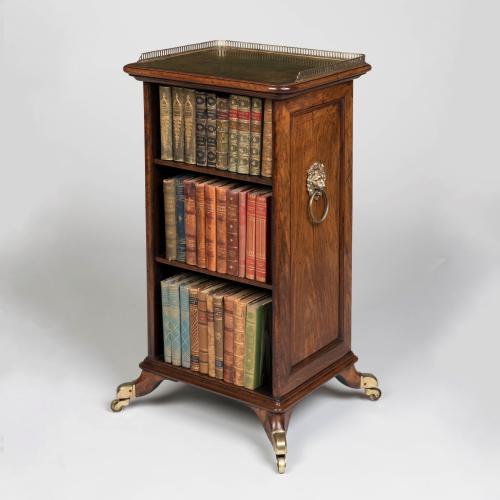