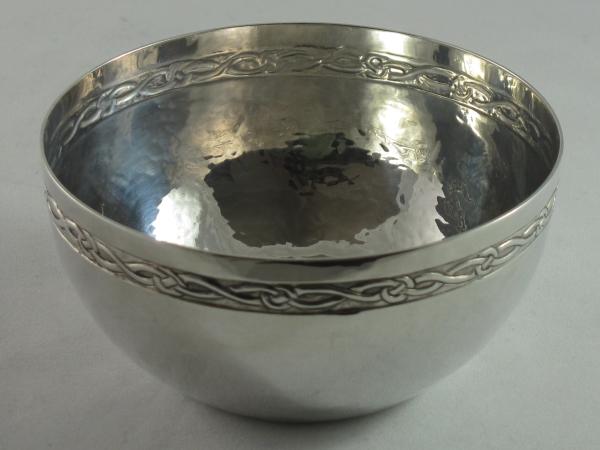 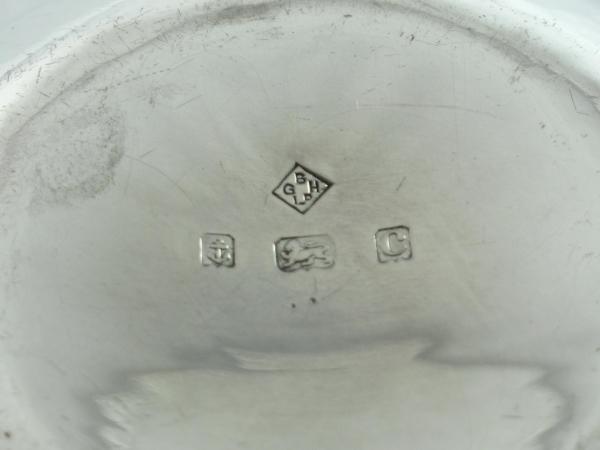 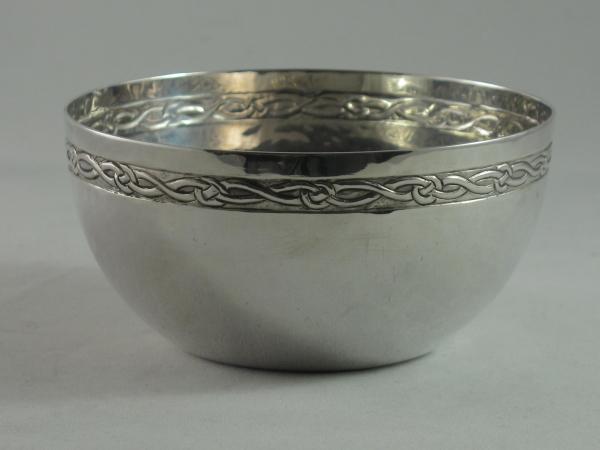 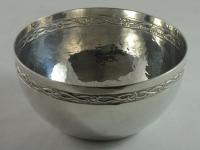 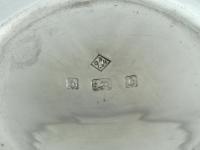 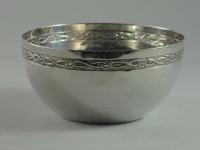 An Arts and Crafts hammered silver bowl by the Birmingham Guild of Handicrafts. Hand hammered design and with a celtic revival entrelac decoration in a small band near the top of the bowl.

Birmingham Guild of Handicraft was an Arts and Crafts organisation operating in Birmingham, England. Its motto was ‘By Hammer and Hand’.

It began as a part of the Birmingham Kyrle Society, then became a more fully formed group within the Kyrle Society in 1890, under the leadership of the silversmith and architect Arthur Stansfield Dixon (1856–1929) and with the lawyer Montague Fordham as first director, in Vittoria Street School for jewellers and silversmiths.

In 1895, the Guild set up as an independent workshop and limited company with the guidance of Edward R. Taylor, who was an important figure in the history of Birmingham School of Art. William Kenrick, the local MP and an Arts and Crafts enthusiast, became a director.

The Guild’s first address was at Kyrle Hall, Sheep Street, the same studios later being taken over by John Paul Cooper. In 1898, the Guild moved to 44-5 Great Charles Street. The Guild produced furniture and metalware, taking special advantage of the switch to electric lighting and the consequent need for new light fittings.

Arthur Dixon was the chief designer and head of metalwork workshop. Other members were Albert Edward Jones and Thomas Birkett. Bernard Sleigh was a teacher at the Guild.

The Guild also produced fine books under the ‘Press of the Birmingham Guild of Handicraft, Limited’ and a periodical titled The Quest. The Quest began in November 1894 and aimed to appear three times a year but was short-lived. William Morris was a contributor.

The Guild was modelled on Charles Robert Ashbee’s 1888 Guild and School of Handicraft, and it found itself in similar financial difficulties due to high running costs and lack of money-making ventures.

Due to commercial pressures, there was a merger with E & R Gittins in 1905, which brought Llewelyn Roberts in to the organisation. In 1919, there was a further merger with Hart, Son & Pearl.

The name was still shown until 1950 in directories as “The Birmingham Guild Ltd., Architectural & Decorative Metalworkers”, the addresses being Grosvenor Road West and Sherbourne St. B16.

Excellent original condition. Light wear to the base