"Attempt to redefine the lands north of Japan" 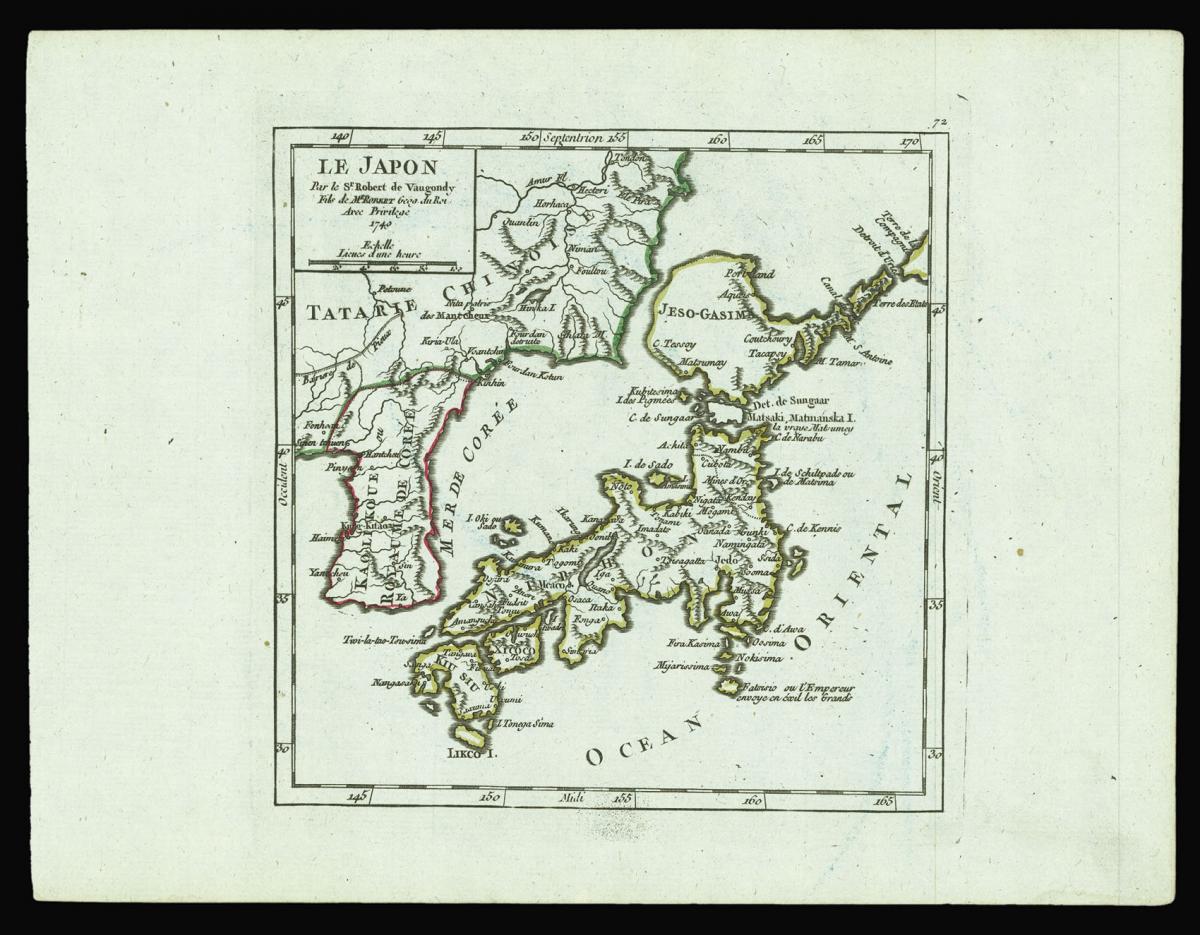 Eighth state of the map, with the number '72' upper right, and with 'Jeso-Gasima' replacing 'Terre d'Yedso'. Published in the Vaugondy family 'Atlas Portatif, Universel et Militaire' from 1748, and reprinted many times, with minor changes, until 1784.

Hubbard describes the map as an "attempt to redefine the lands north of Japan, something no attempted in any map of Japan since J.-N. Bellin published his 1735-dated map of Japan and Kamchatka in 1736. The treatment of Hokkaido, shown here as 'Terre d'Yedso', clearly depicts an island, separate from the Asian mainland.

It is somewhat similar to the treatment given by G.L. Le Rouge in his ma 'L'Asie Suivant les Dern.res Observ.ons des Moscovites' of 1747. Le Rouge, in explanatory text in the upper right corner of the map states: 'La Terre de Yesso est ici detachee de notre Continent'. When, however, he published his detailed map of Japan in 1748, he omitted all but the southernmost tip of Hokkaido".

Didier (1723-1786), son of Gilles Robert de Vaugondy, was made 'geographe du roi' in 1751, after the presentation of two globes to King Louis XV. His name first appeared on many of the 209 small maps which make up the octavo-oblong 'Atlas Portatif universel et militaire' [as here], published by Gilles in collaboration with Durand and Pissot, in 1748.

"The publication of this small atlas marked a change for Gilles Robert from merely reissuing Sanson maps to creating newly engraved maps, and it introduced him to the possibilities of collaboration with bookdealers. While there are many maps in this little atlas, they are small and not very detailed, therefore not as expensive to produce as the folio maps in the 'Atlas Universel': the maps had been engraved on small copper plates, reducing the amount of copper necessary; the lack of detail would have reduced the cost of the labour for the engraving" (Pedley).

The Robert de Vaugondy family of cartographers was "securely based on the stock in trade of the great Nicolas Sanson, inherited in 1730 by Didier's father Gilles" (Katherine Swift). Gilles entered the map trade rather late in life, being already 46 when appointed 'geographe du roi' in 1734.

"He was a professor of mathematics who, according to later sources, had travelled a great deal in his youth. After befriending the ailing and aging Pierre Moullard-Sanson in 1730, he became one of the three heirs to Moullard-Sanson's geographical 'fonds' along with Jean Fremont, a lawyer, and Jacques-Simon Perrier, a priest.

Robert and Fremont bought out Perrier's share of the Sanson stock, and Robert added to this collection by buying the plates of Nicolas Sanson from Jean Mariette in 1733. Robert's earliest map dates from 1731 ('Cours de la Meuse', in 'l'Historie de Verdun', 1745); much of his early work appeared as maps supplementing texts of books.

Nonetheless, it is fair to say with Buache, that Gilles Robert de Vaugondy mostly issued Sanson maps with minor modifications. It was his son Didier (1723-1786) who wrote the theoretical books, taught geography and mathematics, presented memoires to the Academy of Sciences, as well as publishing new maps" (Mary Sponberg Pedley, 'New Light on an Old Atlas', for Imago Mundi, 1984, volume 36, pages 48-63).