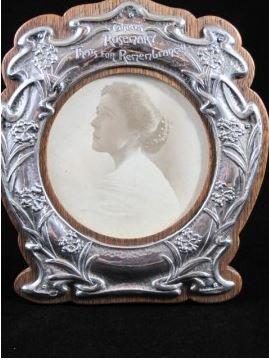 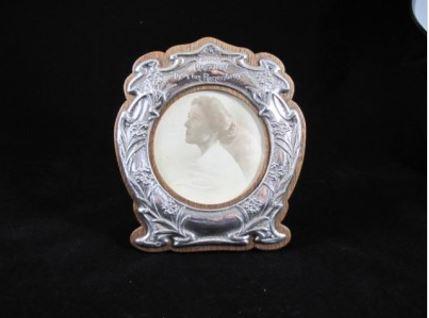 Arts & Crafts Silver frame ‘Rosemary for Remembrance’ Hallmarked Birmingham 1903 Maker Joseph Adams Registered Design no for 1903 . The piece is silver fronted and has a wooden back.

The quote is from Shakespeare’s Hamlet Act 4 Scene 5 and is said by Ophelia to Laertes.  A charming piece

The Arts and Crafts movement was an international movement in the decorative and fine arts that began in Britain and flourished in Europe and North America between about 1880 and 1920.

It stood for traditional craftsmanship using simple forms, and often used medieval, romantic, or folk styles of decoration. The movement had an “extraordinary flowering” in Scotland where it was represented by the development of the ‘Glasgow Style’ which was based on the talent of the Glasgow School of Art.

Structured more by a set of ideals than a prescriptive style, the Movement took its name from the Arts and Crafts Exhibition Society, a group founded in London in 1887 that had as its first president the artist and book illustrator Walter Crane.

Founded by an Act of Parliament in 1773, Birmingham is one of the busiest Assay Offices in the world.  In its busiest years between 2002 and 2004 twelve million hallmarks a year were struck on articles of gold, silver or platinum