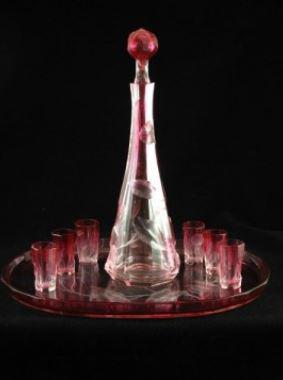 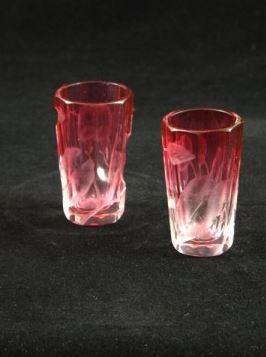 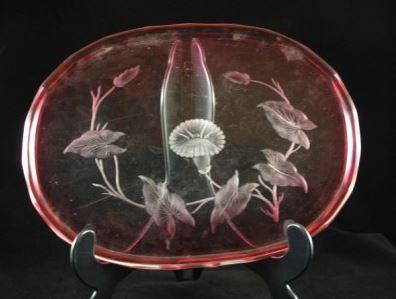 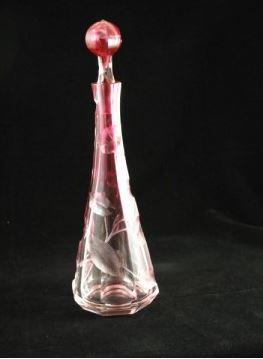 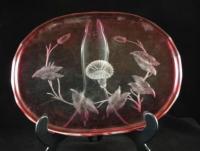 Art Nouveau  Moser decanter, tray and 6 glasses in the rare colour of ruby and clear. Using the Eckentiefgravur technique employing a sharp angular body deeply cut in the form of intaglio flowers to decorate each piece.

It is unusual to have the original tray intact. German c 1890. Excellent original condition with a little light scratching to the tray

The original company of Ludwig Moser & Söhne, founded in 1857 by Ludwig Moser in Karlovy Vary, was a glass workshop initially devoted to polishing and engraving blank glass pieces only later did the company begin designing and making its own art glass products.

Engraving blanks, from Loetz, Meyr’s Neffe and Harrachov was performed by the workshop in the early years. At the Vienna International Exhibition of 1873 he was awarded a medal for merit; that same year he was appointed the exclusive supplier of glass to the Emperor Franz Joseph I.

Ludwig took over a glass factory in Meierhofen bei Karlsbad in 1893 to create a full service glassworks employing 400 people under the name of Karlsbaderglasindustrie Gesellschaft Ludwig Moser & Söhne where his sons Gustav and Rudolf also worked.

In 1904 Moser received a warrant to supply the Imperial Court of the Emperor of Austria and four years later became supplier to Edward VII.

In 1915 the company exhibited at the Panama-Pacific International Exposition and was again awarded a medal, which Louis Comfort Tiffany and Charles Tuthill thought well deserved due to the outstanding quality of the hot glass applied decorations on coloured Bohemian glass.

Following the death of his father in 1916, Leo Moser took over the direction and the company expanded significantly resulting in their recognition by a Grand Prize award at the Paris International Exhibition of Decorative Art in 1925. They also exhibited in London, Belgium, Italy and Vienna

In excellent original condition a little light scratching to the tray