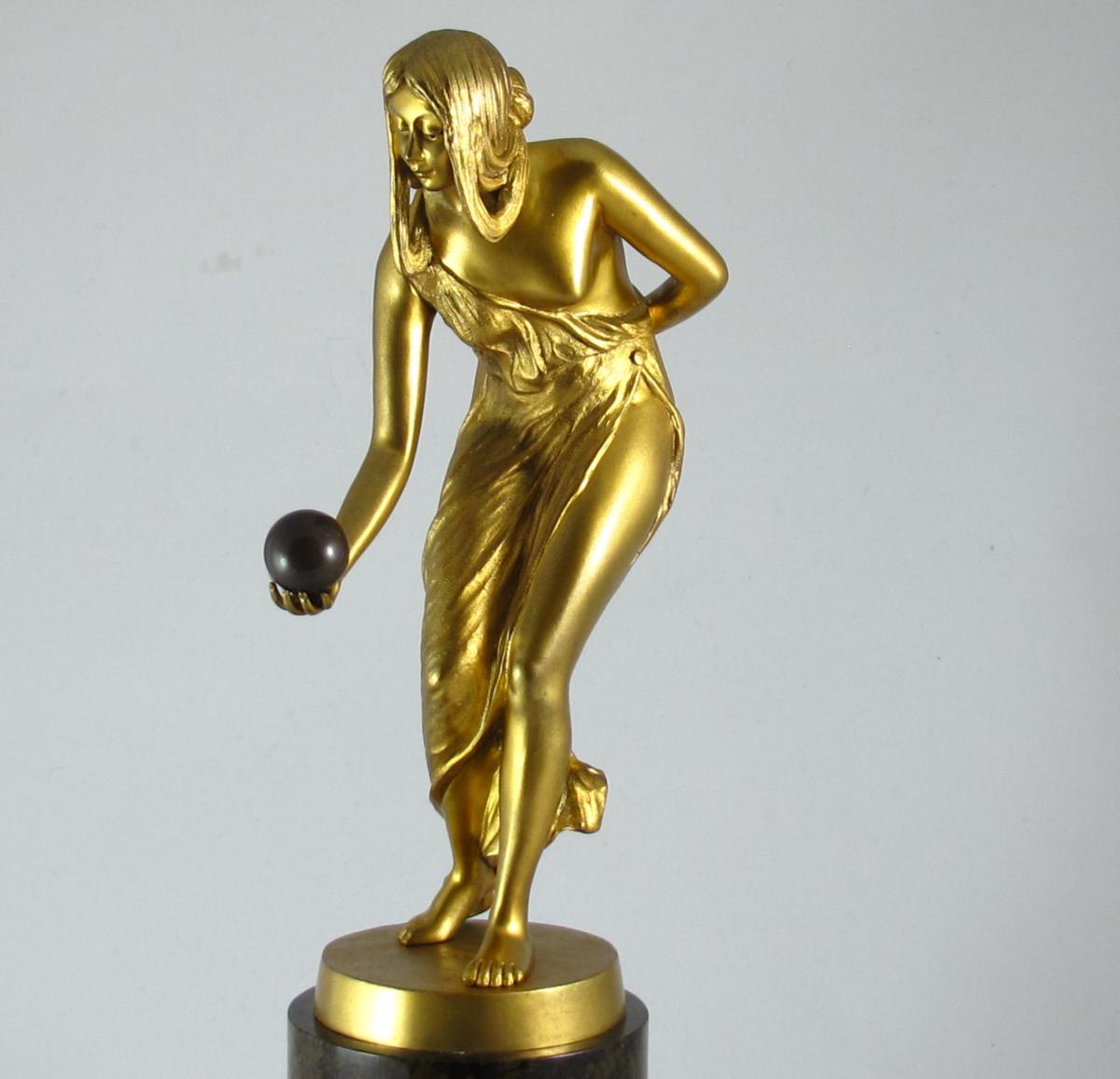 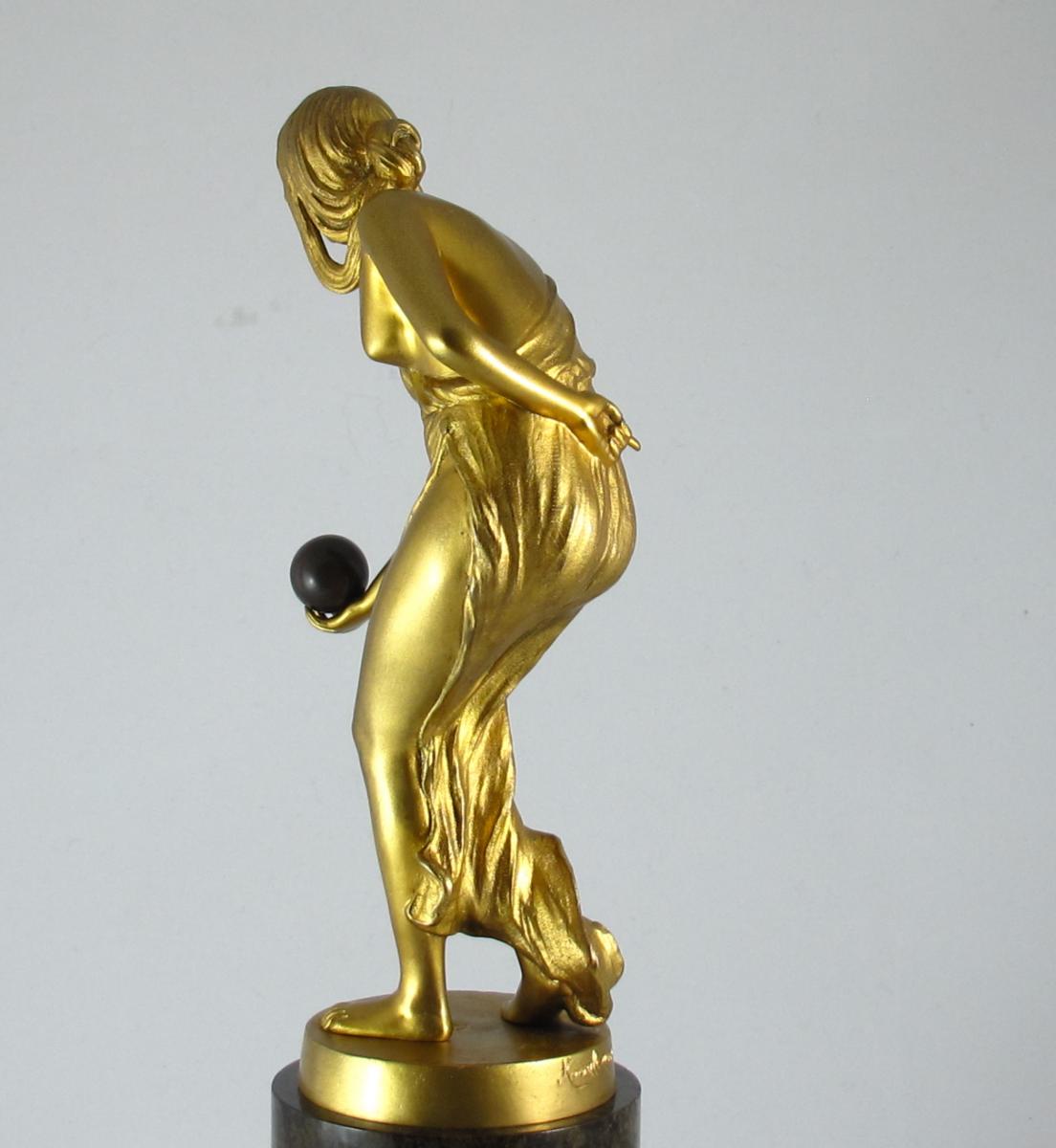 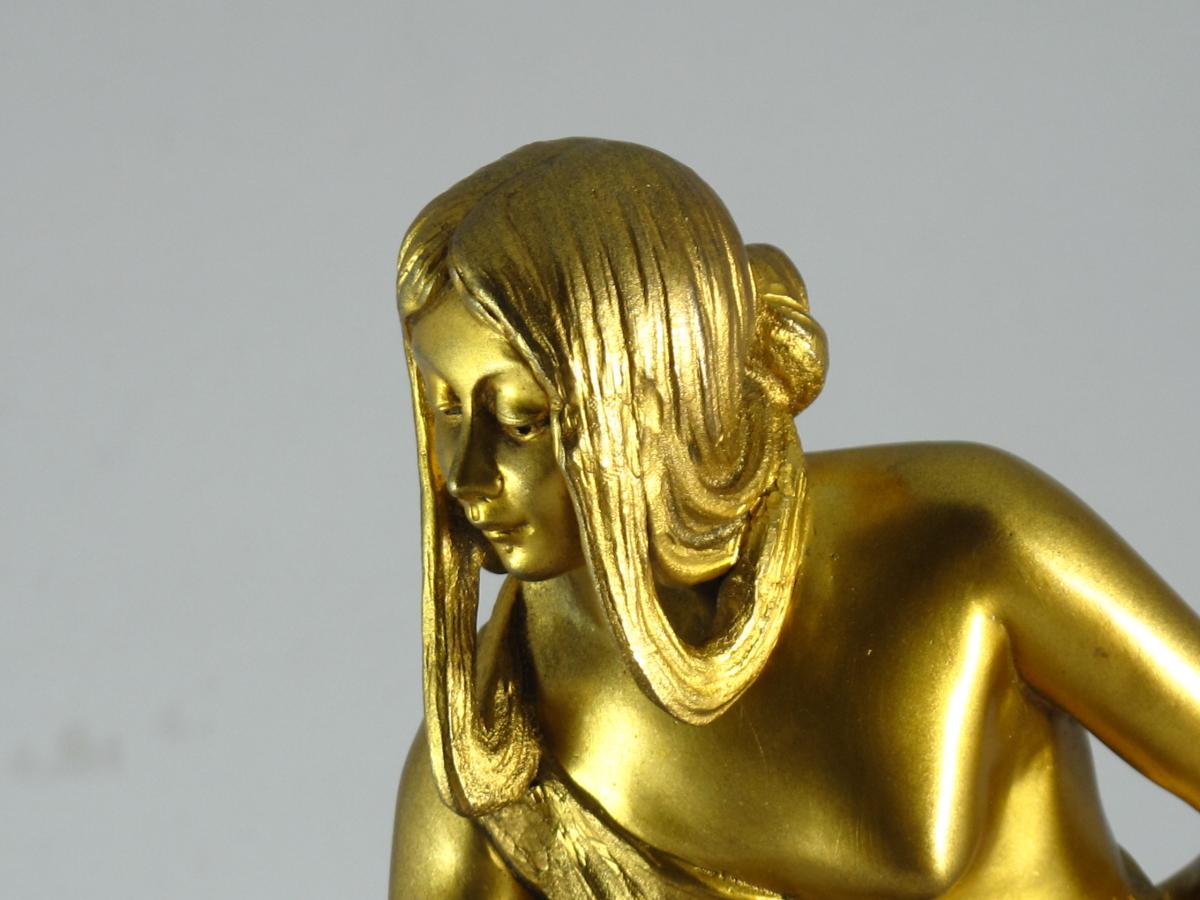 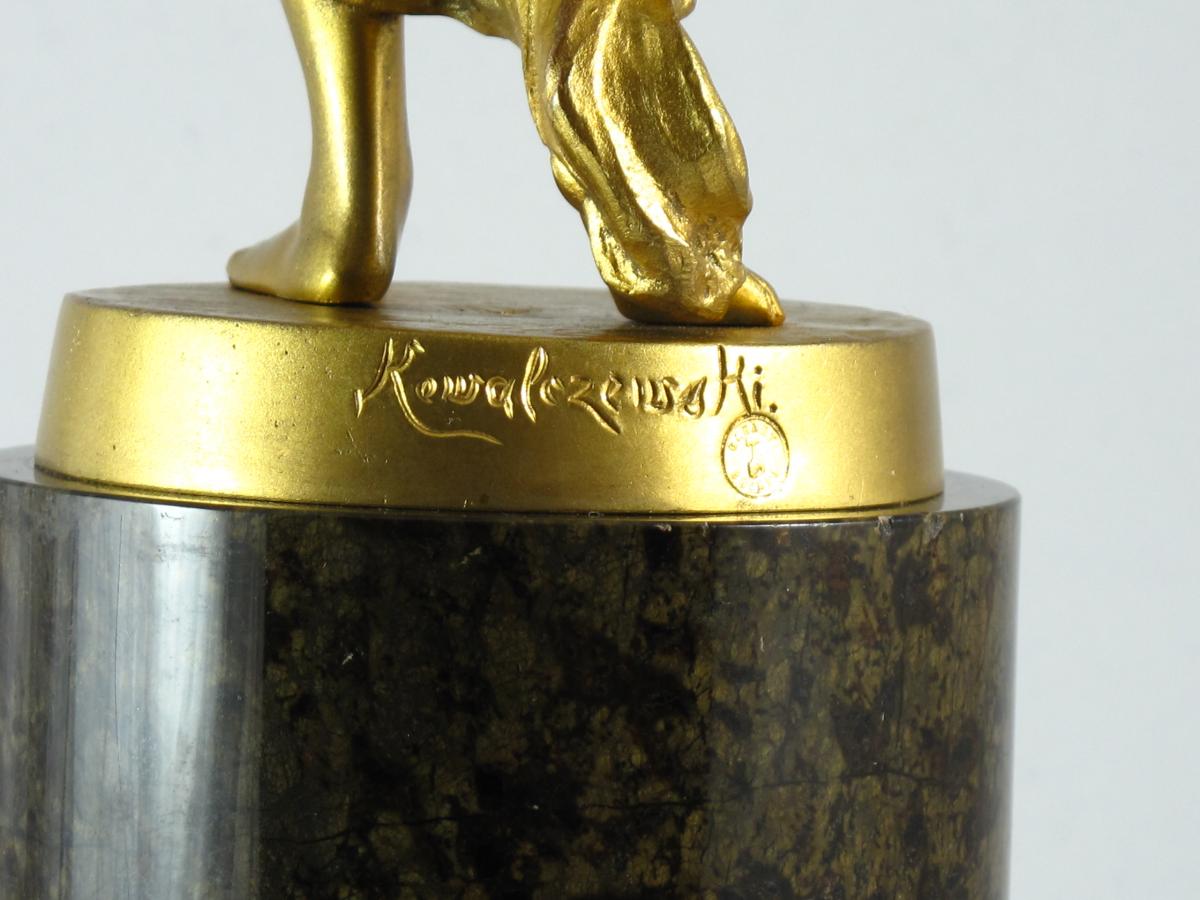 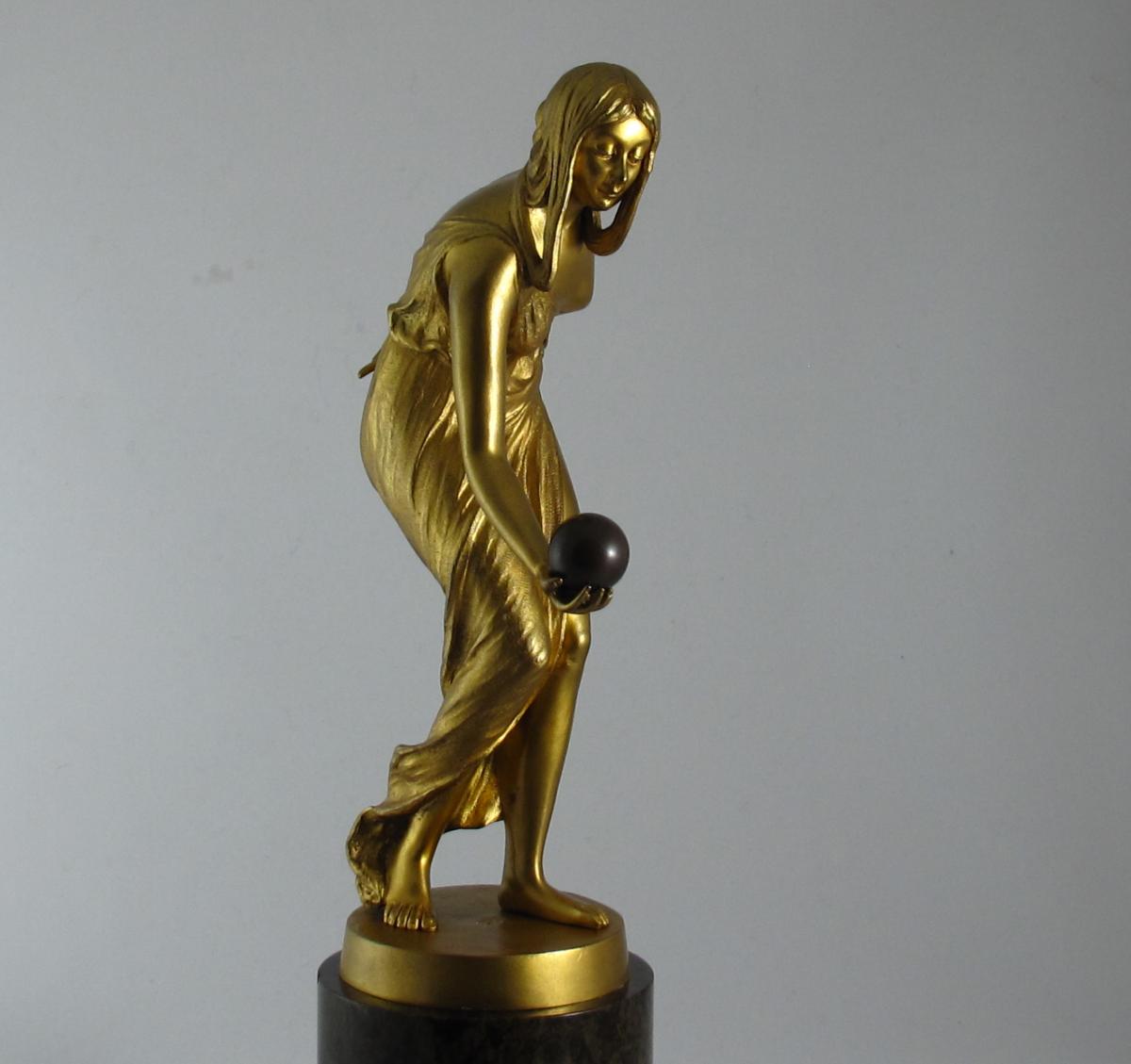 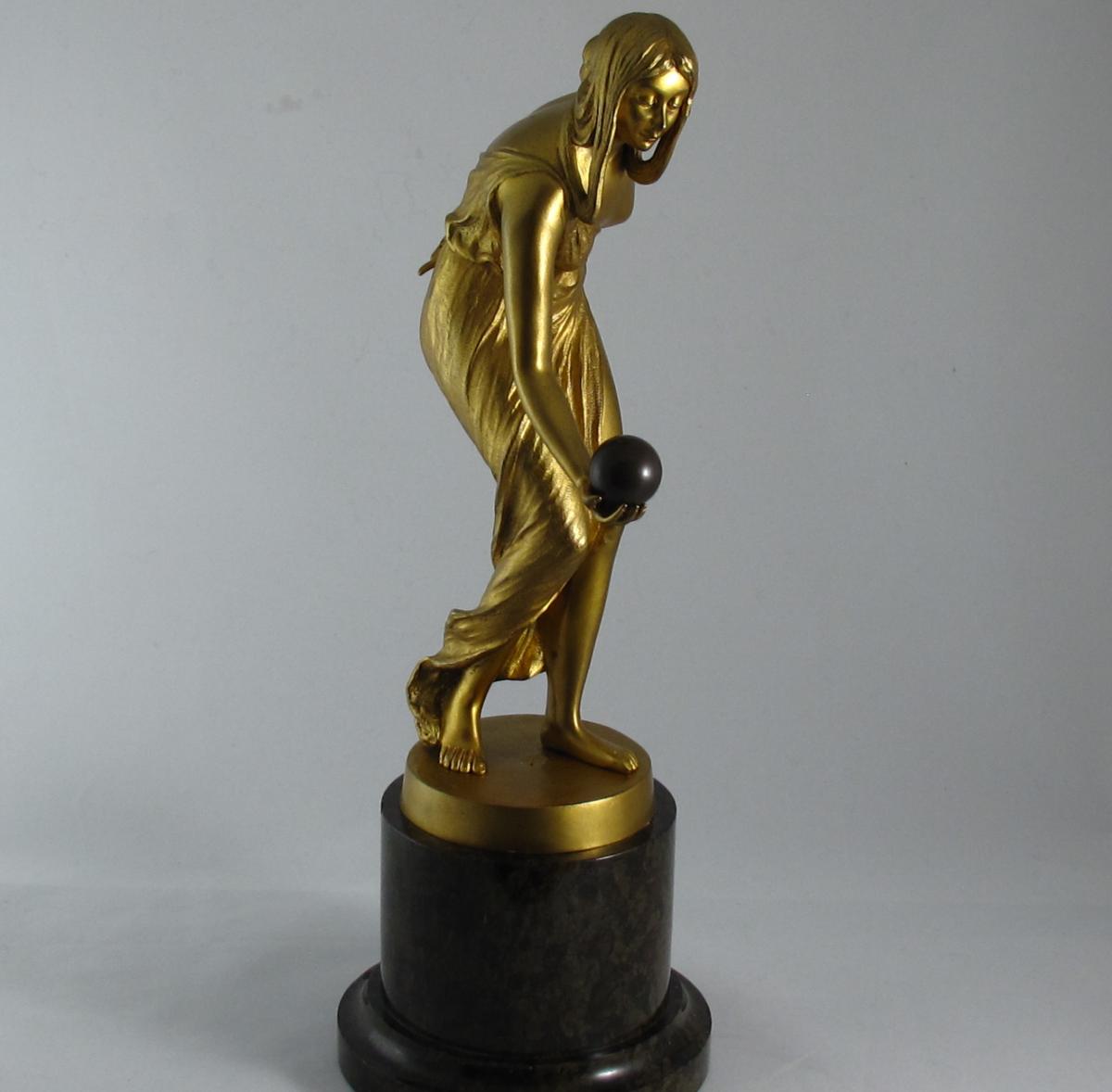 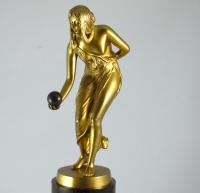 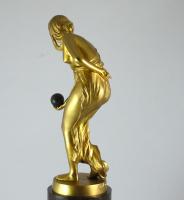 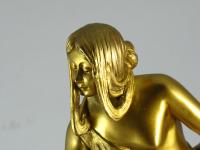 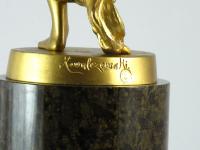 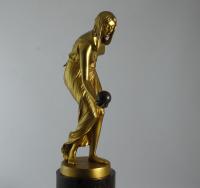 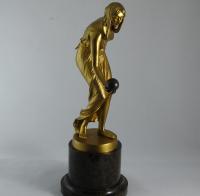 Art Nouveau gilt bronze figure of Atalanta – sometimes known as Kugelspielerin (ball player) by Karl P Kowalczewski (1876-1927). This piece was produced c 1906 and is signed Kowalczewsli and has a foundry seal. Marble base.

Max height including the base 37 cm. Excellent original condition. It is a beautiful piece that would enhance any interior

Karl P. Kowalczewski was a German sculptor (1876 Schwarzenau to 1927 Berlin), he studied at the academy in Berlin as master student of
Ludwig Manzel.

He won the 1909 Rome prize of the academy, and was also a member of “Reichsverband bildender künstler Deutschlands”, “allgemeine Deutsche kunstgenossenschaft” and “Berliner bildhauer-vereinigung”.

ATALANTA was an Arkadian heroine–a huntress and a favourite of the goddess Artemis. She was exposed by her father at birth in the wilds but was suckled by a she-bear and afterwards found and raised by hunters.

Atalanta swore to defend her virginity and when two Kentauroi (Centaurs) burst into her grove, she slew them with arrows. She later took part in the voyage of the Argonauts and defeated the hero Peleus in wrestling at the funeral games of King Pelias.

When King Oineus (Oeneus) summoned heroes to destroy the Kalydonian (Calydonian) Boar, Atalanta answered the call and was the first to draw blood. Meleagros (Meleager) awarded her the prize of the skin but his uncles protested and tried to take it from her by force. The hero slew them for the affront.

Atalanta was eventually reunited with her father Skhoineus (Schoeneus) who insisted that she wed. The heroine reluctantly agreed insisting that a suitor must defeat her in a race and that the losers be put to death.

Melanion–or Hippomenes–however, sought the help of the goddess Aphrodite who provided him with three golden apples to cast before the girl in the race. When Atalanta stooped to retrieve these, she was slowed enough to allow the hero to emerge victorious.

Atalanta’s name was derived from the Greek word atalantos meaning “equal in weight”–perhaps a reference to her success in various contests with men.

Approximate height including the base 37 cm