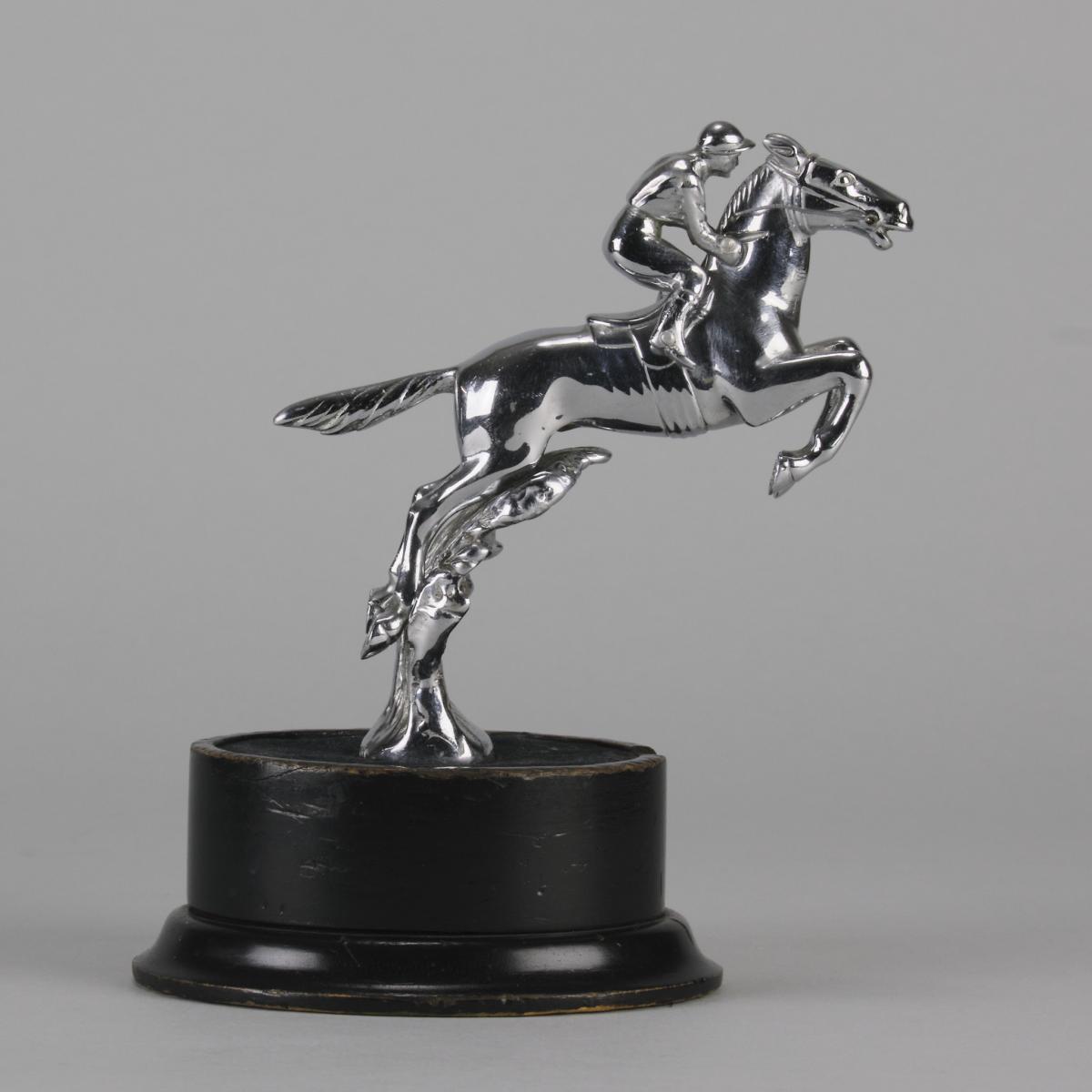 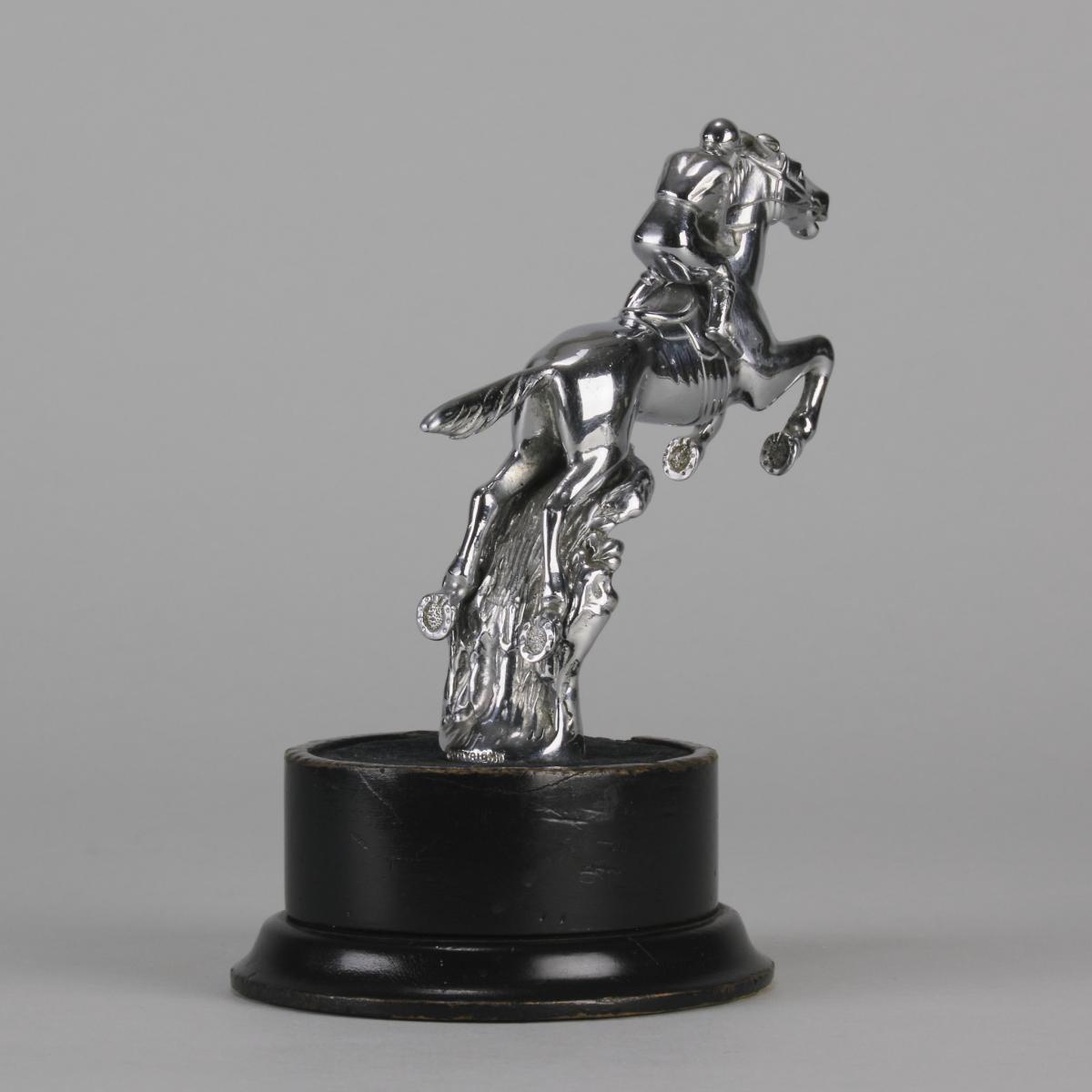 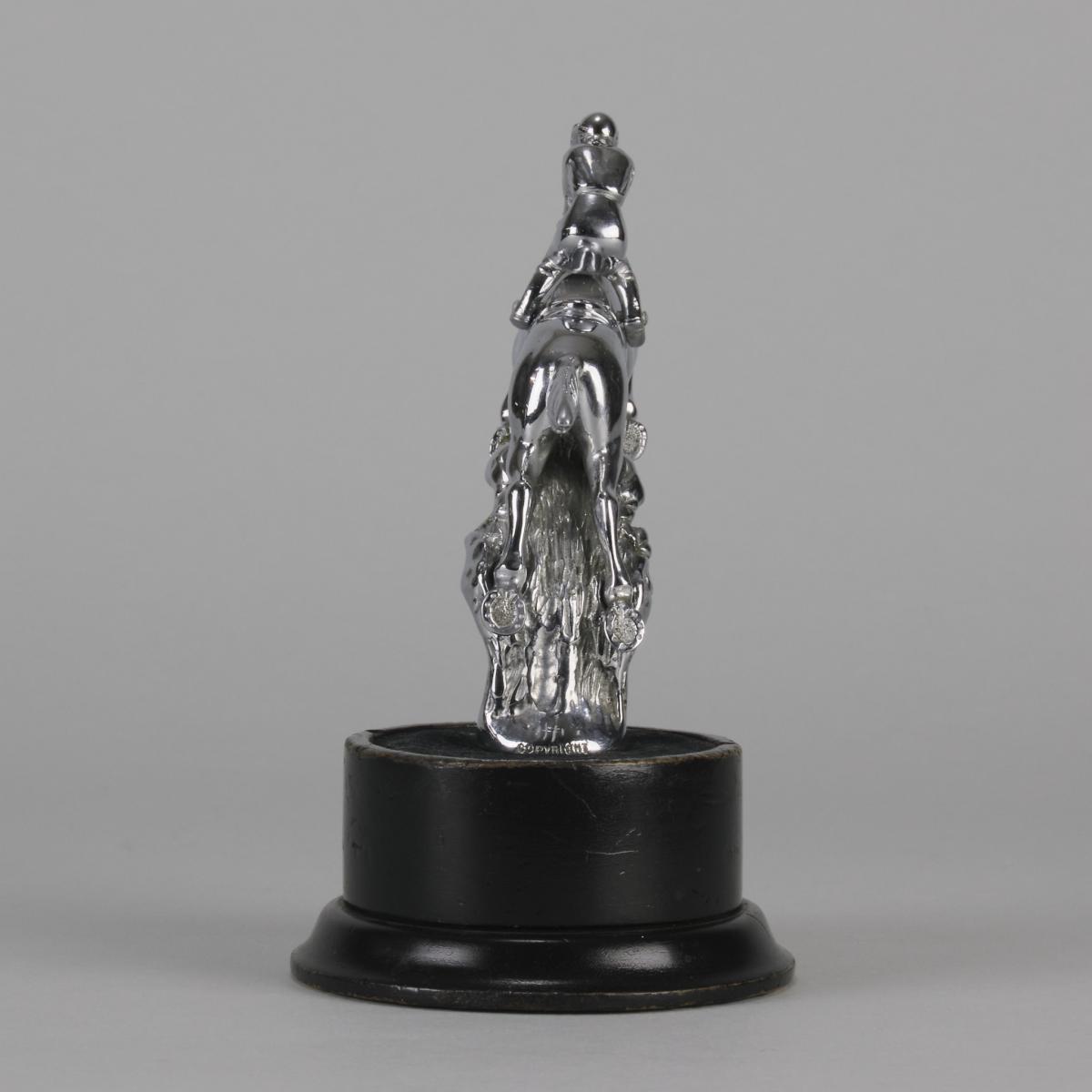 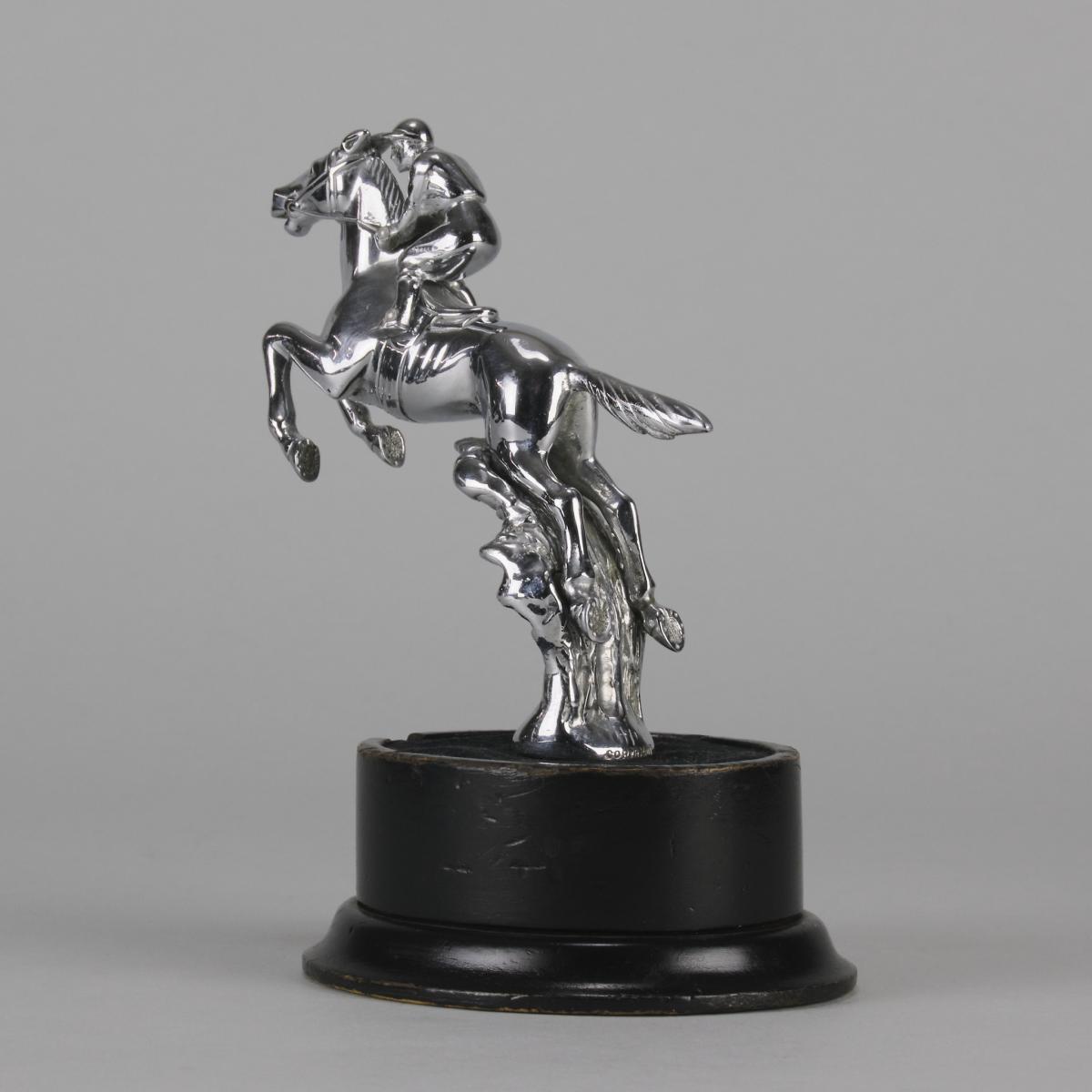 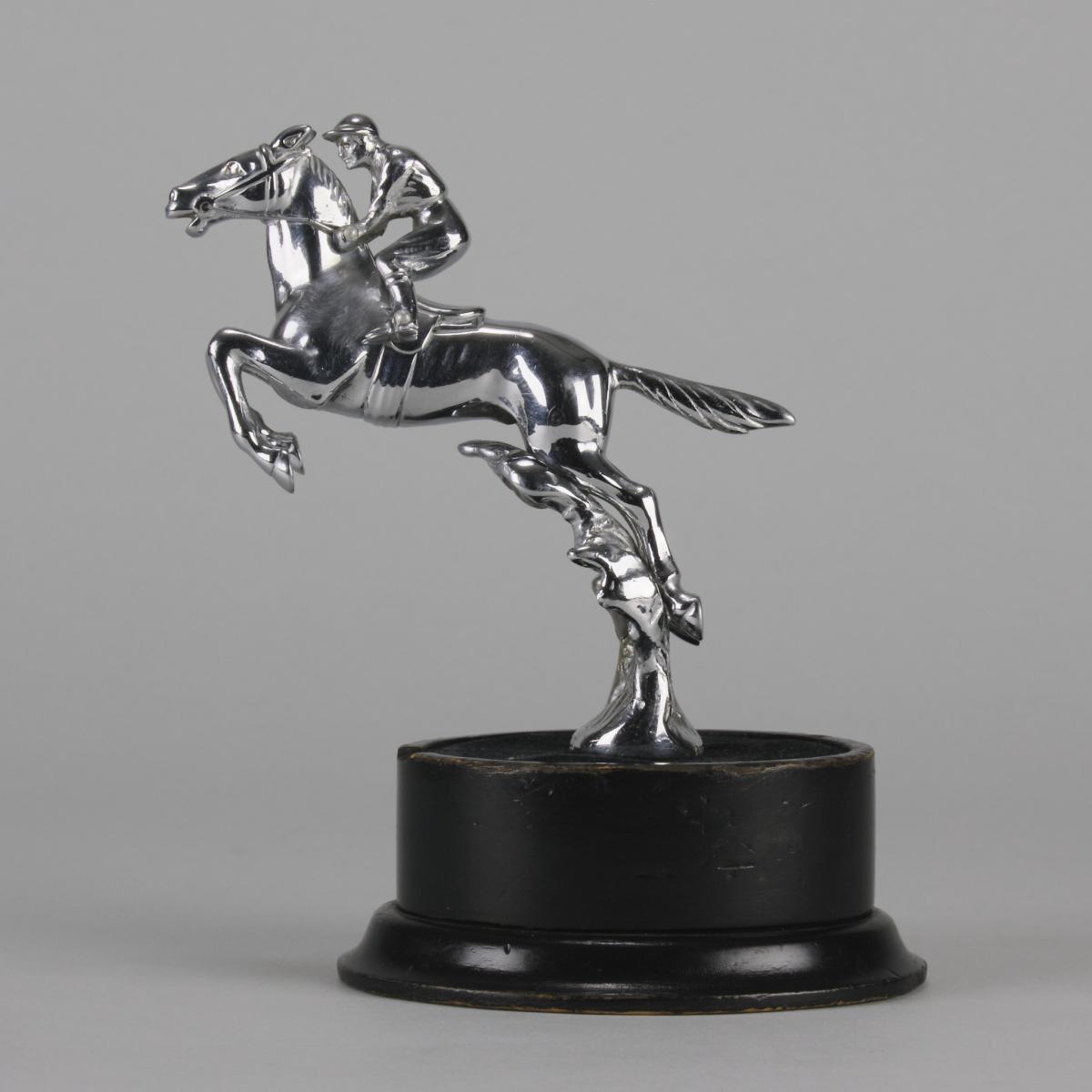 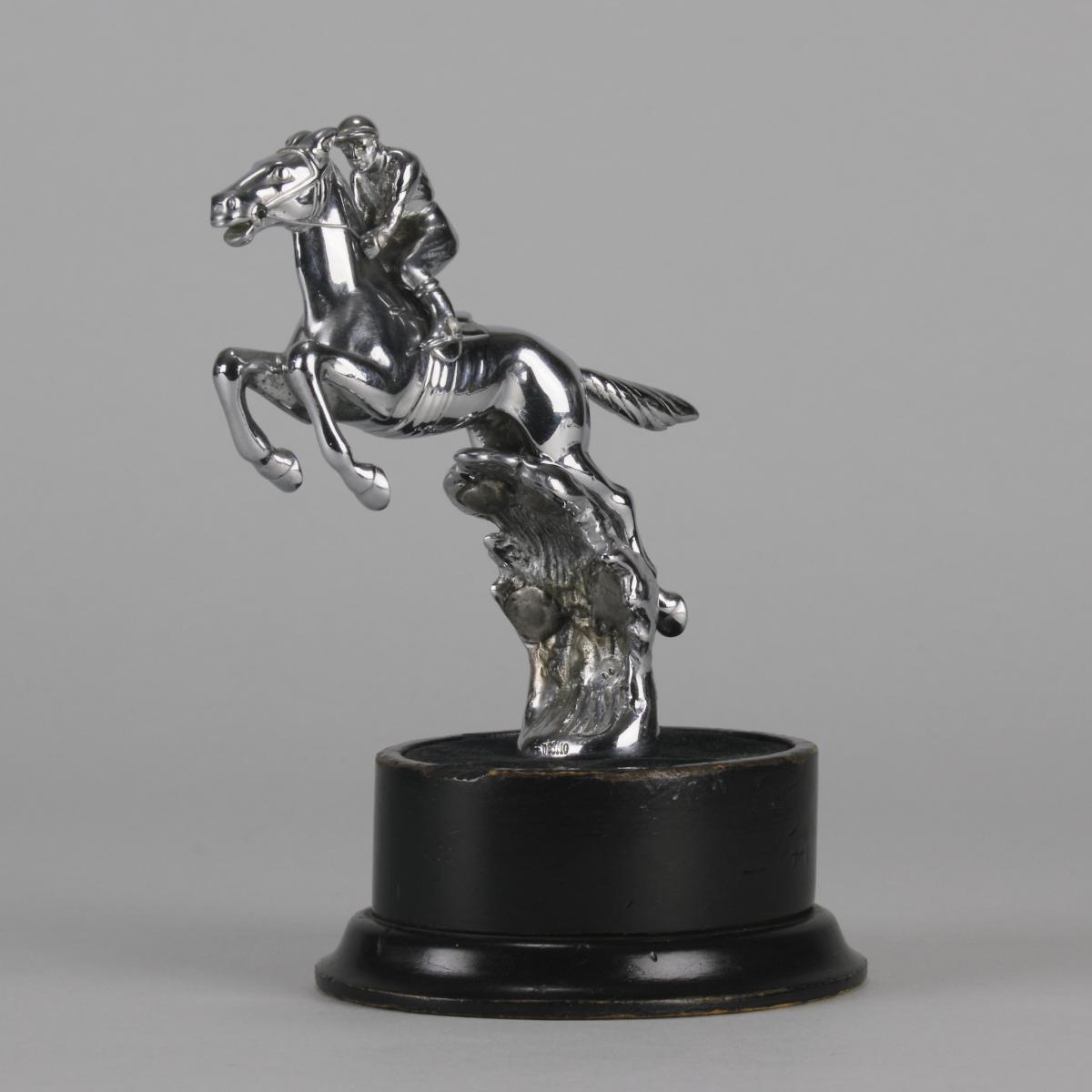 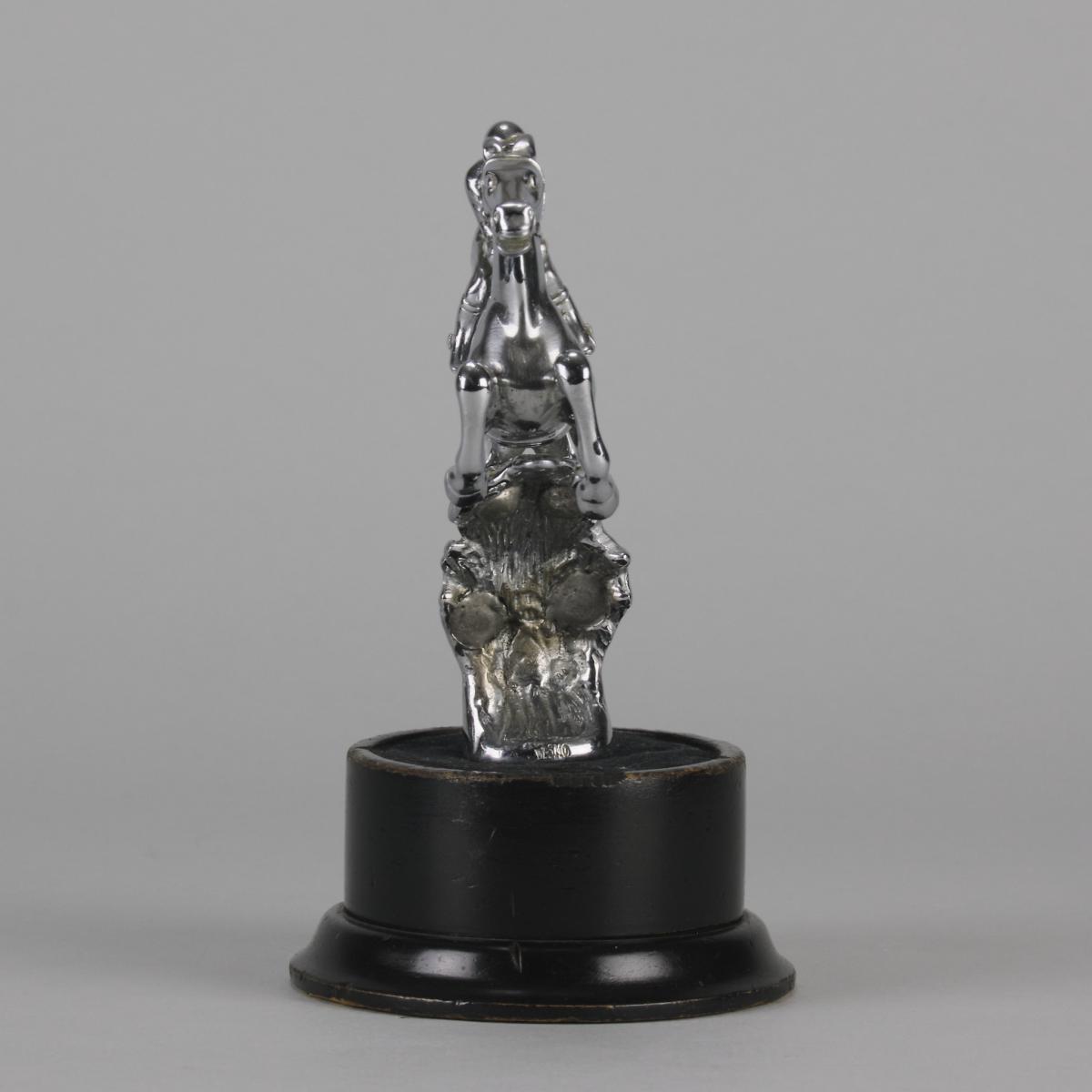 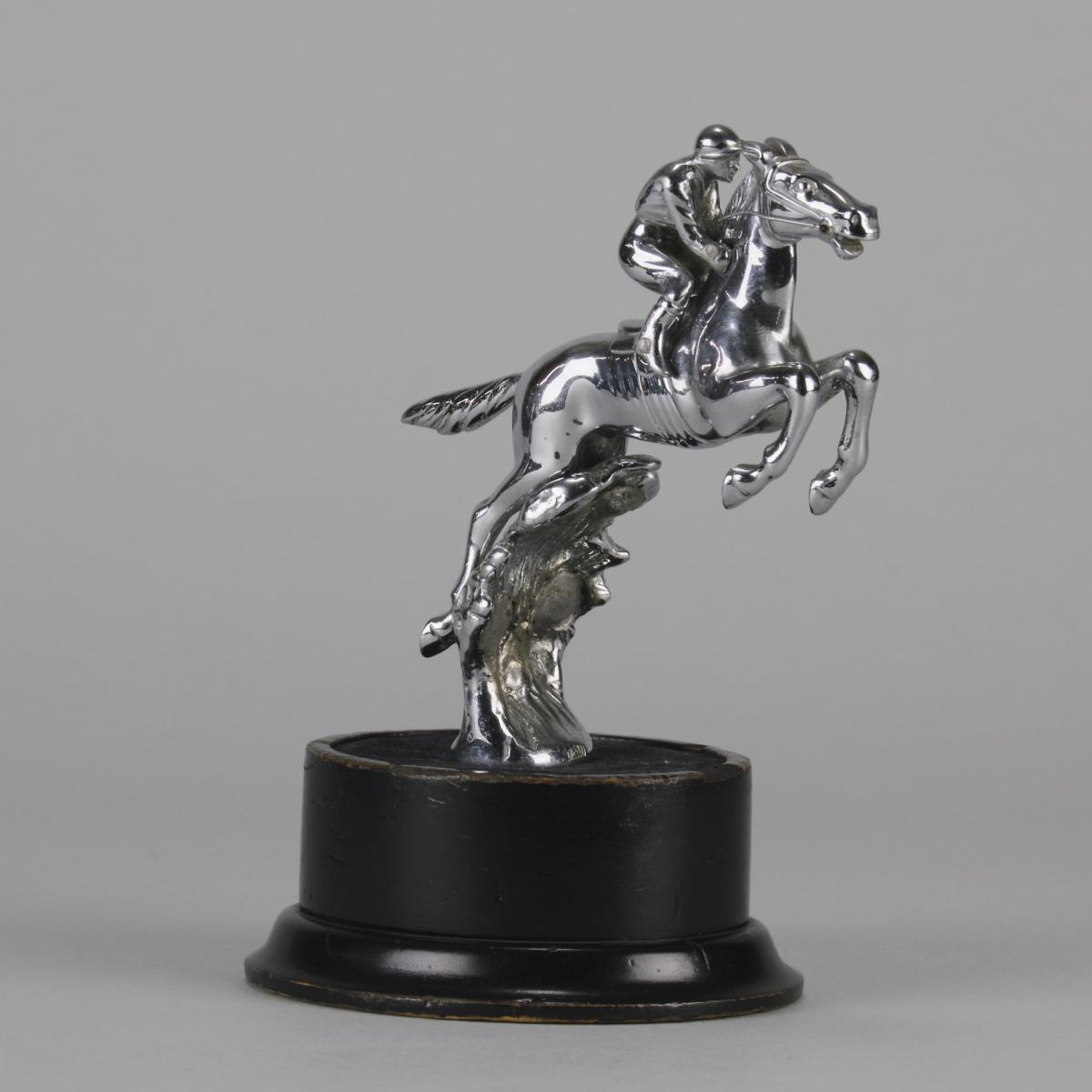 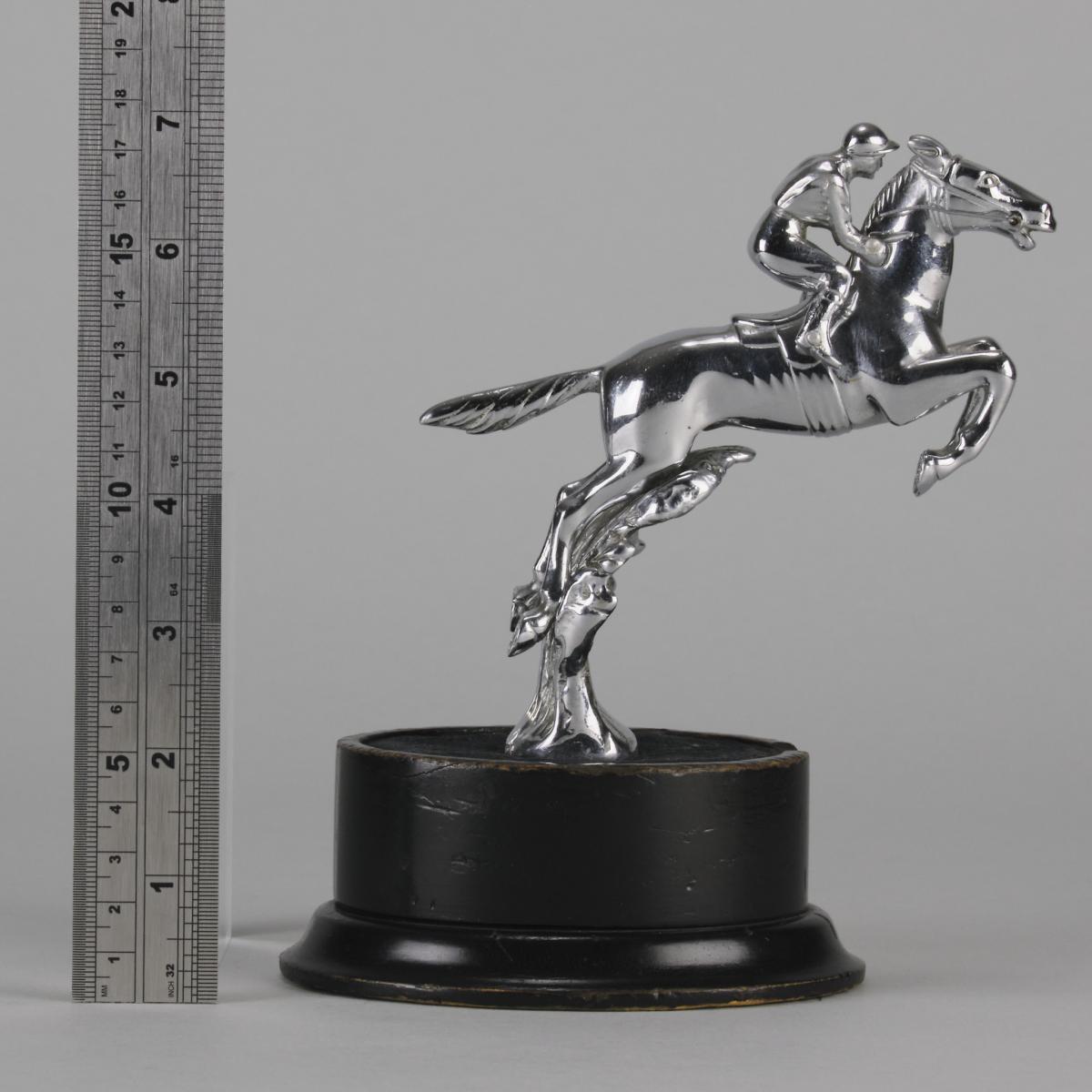 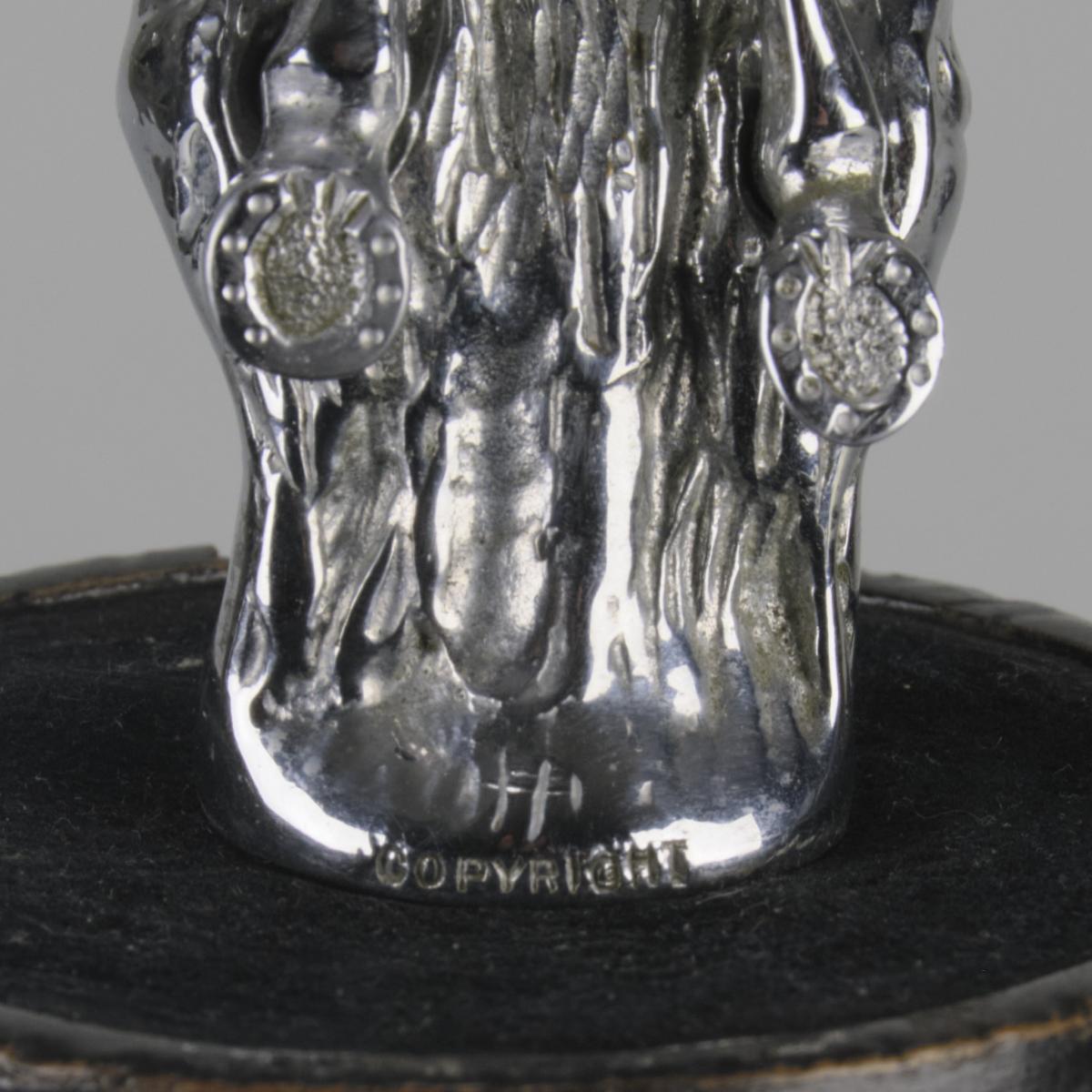 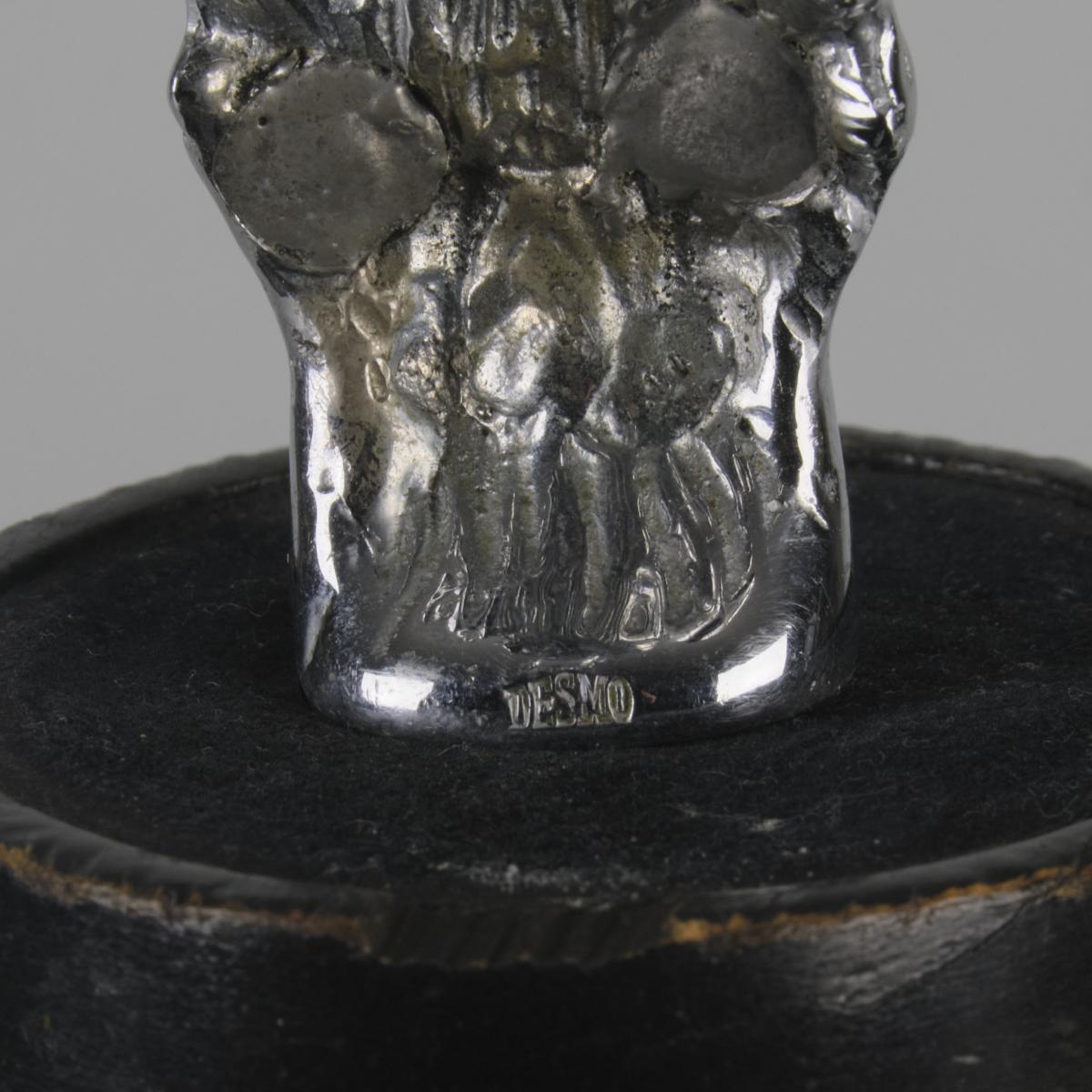 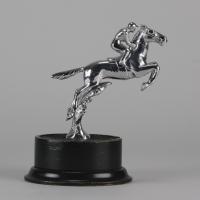 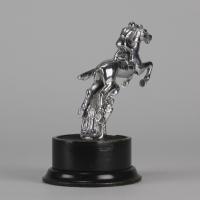 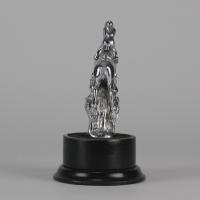 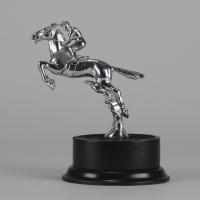 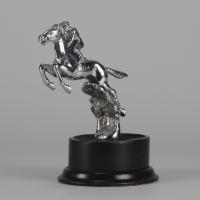 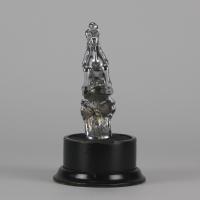 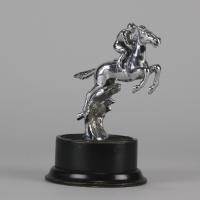 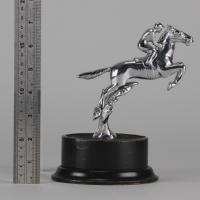 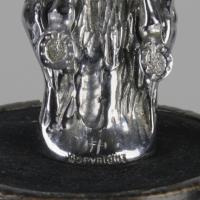 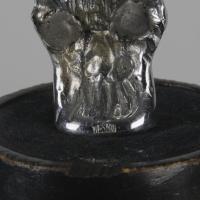 An excellent mid 20th Century Art Deco chrome car mascot in the form of a jumping steeplechaser, with fine detail. Raised on a wooden circular base with copyright mark and stamped Desmo

In the early years, automobiles had their radiator caps outside of the hood and on top of the grille which also served as an indicator of the temperature of the engine's coolant fluid. The Boyce MotoMeter Company was issued a patent in 1912 for a radiator cap that incorporated a thermometer that was visible to the driver with a sensor that measured the heat of the water vapor, rather than the water itself. This became a useful gauge for the driver because many early engines did not have water pumps, but a circulation system based on the "thermo-syphon" principle as in the Ford Model T.

Hood ornaments were popular in the 1920s, 1930s, 1940s, and 1950s, with many automakers fitting them to their vehicles. Moreover, a healthy business was created in the supply of accessory mascots available to anyone who wanted to add a hood ornament or car mascot to their automobile. Most companies like Desmo and Smith's are now out of business with only Louis Lejeune Ltd. in England surviving. Sculptors such as Bazin, Paillet, Sykes, Renevey, and Lejeune all created finely detailed sculptures in miniature.

“Excellent Original Condition - Please note that our items are genuine antiques with considerable age. It is therefore normal that they will show some signs of wear and handling to the surface. This change to the surface is known as 'patina' and confirms the age of the item. Patina is considered desirable and beneficial to the value unless there is damage, restoration or the original surface has been badly worn away. 'Excellent condition' is a term used to show that the item does not have any issues that would materially affect its value.”
Enquire via Email
Enquire via WhatsApp 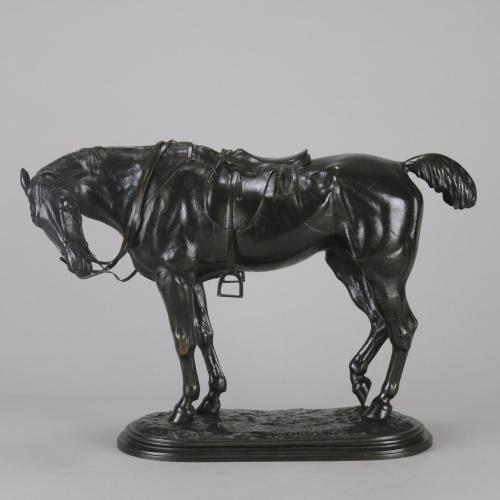 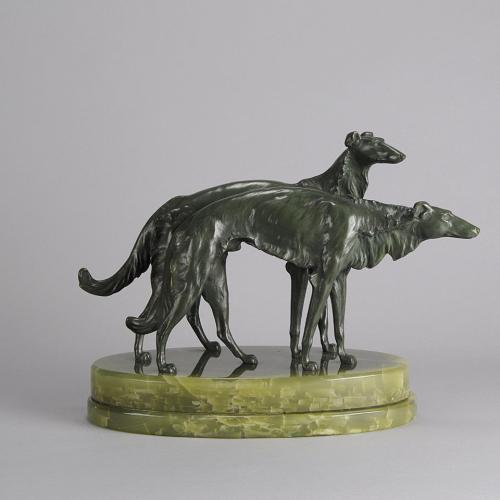 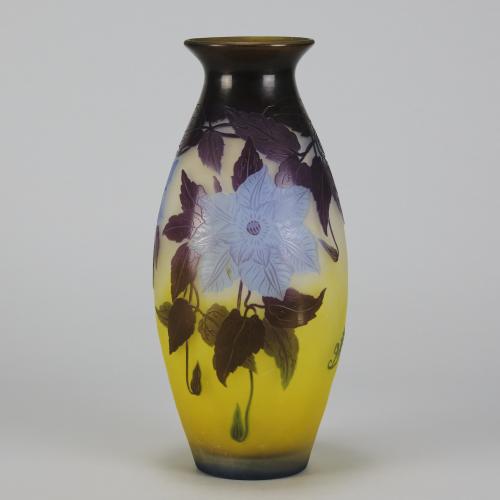