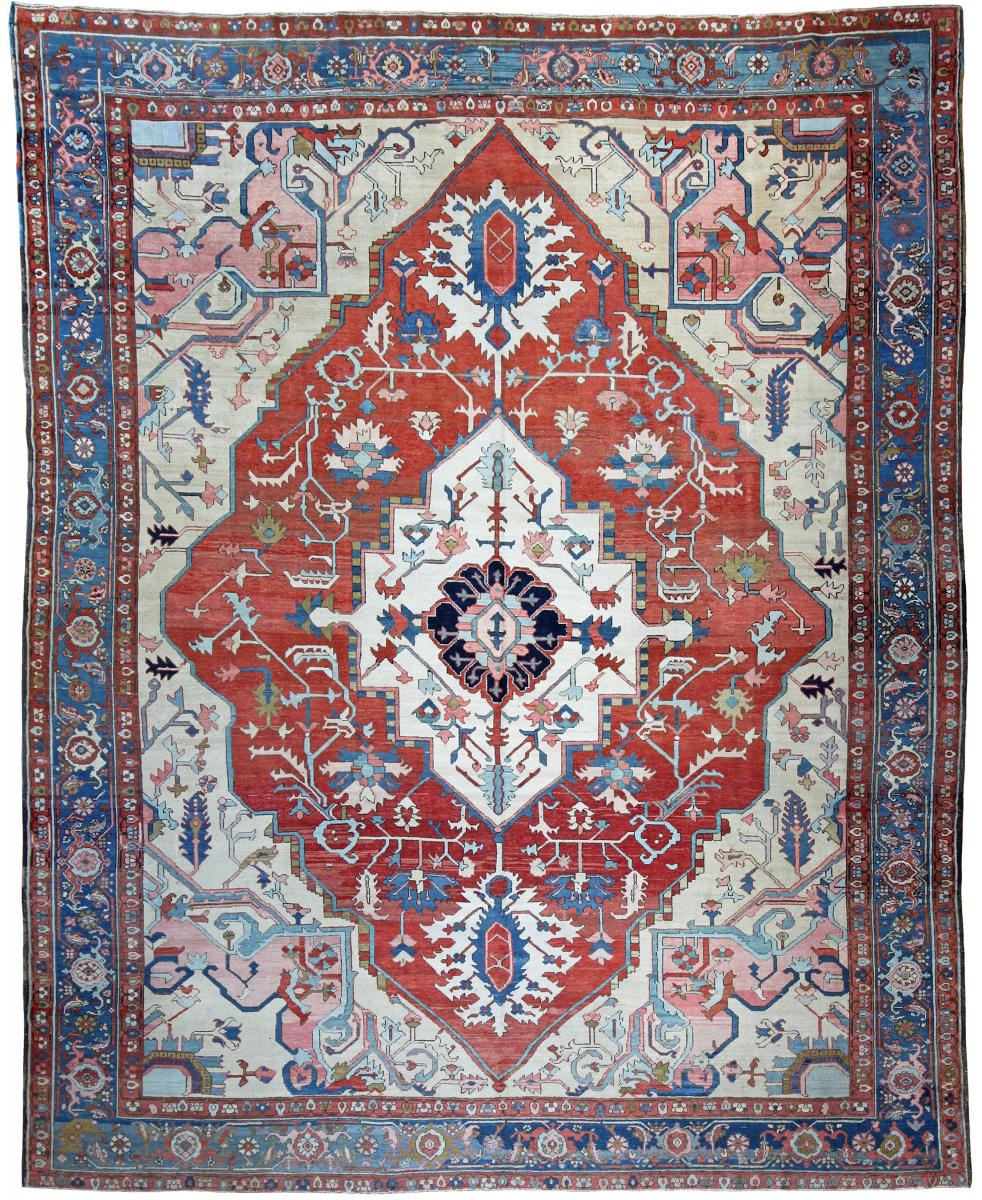 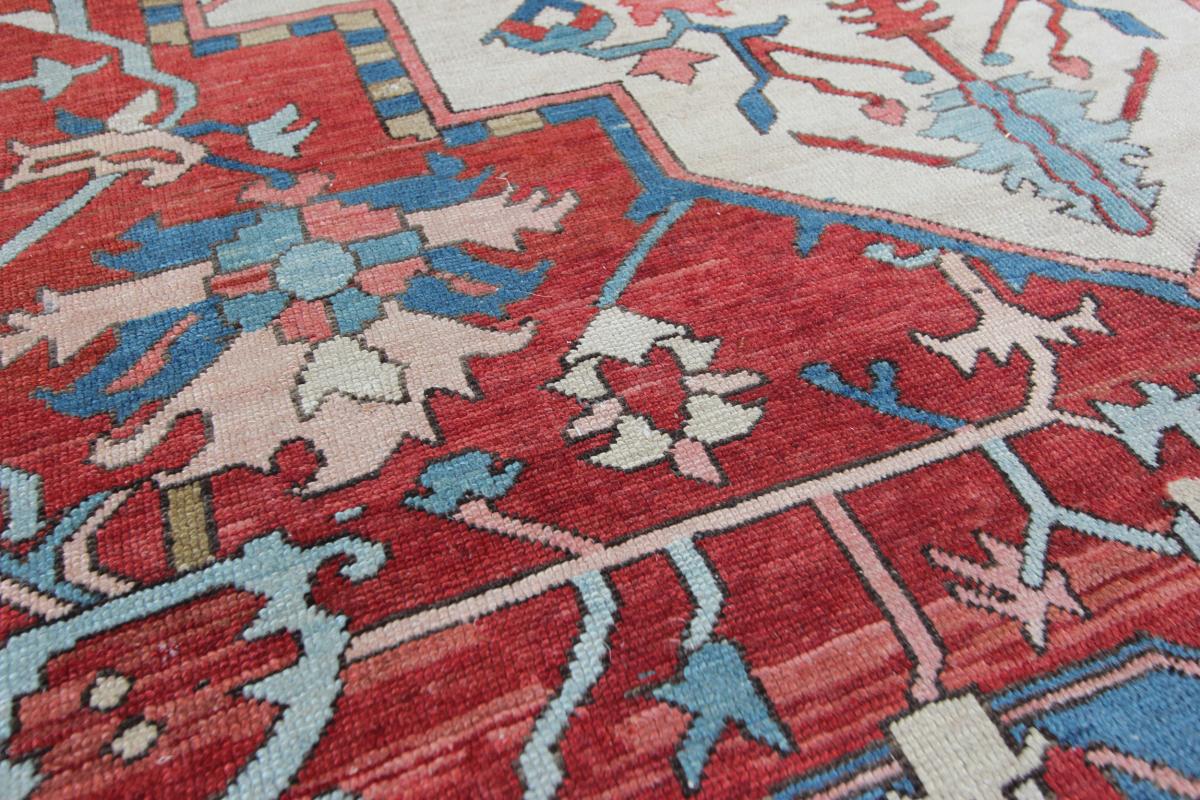 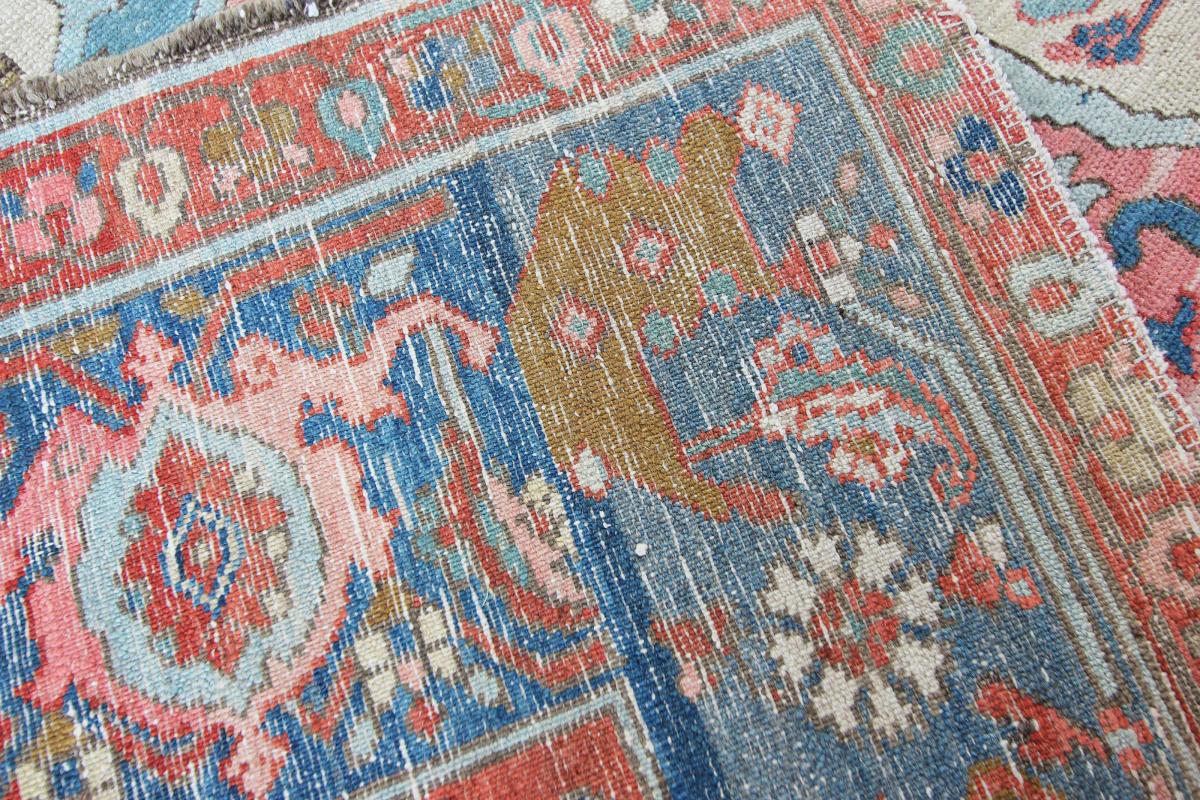 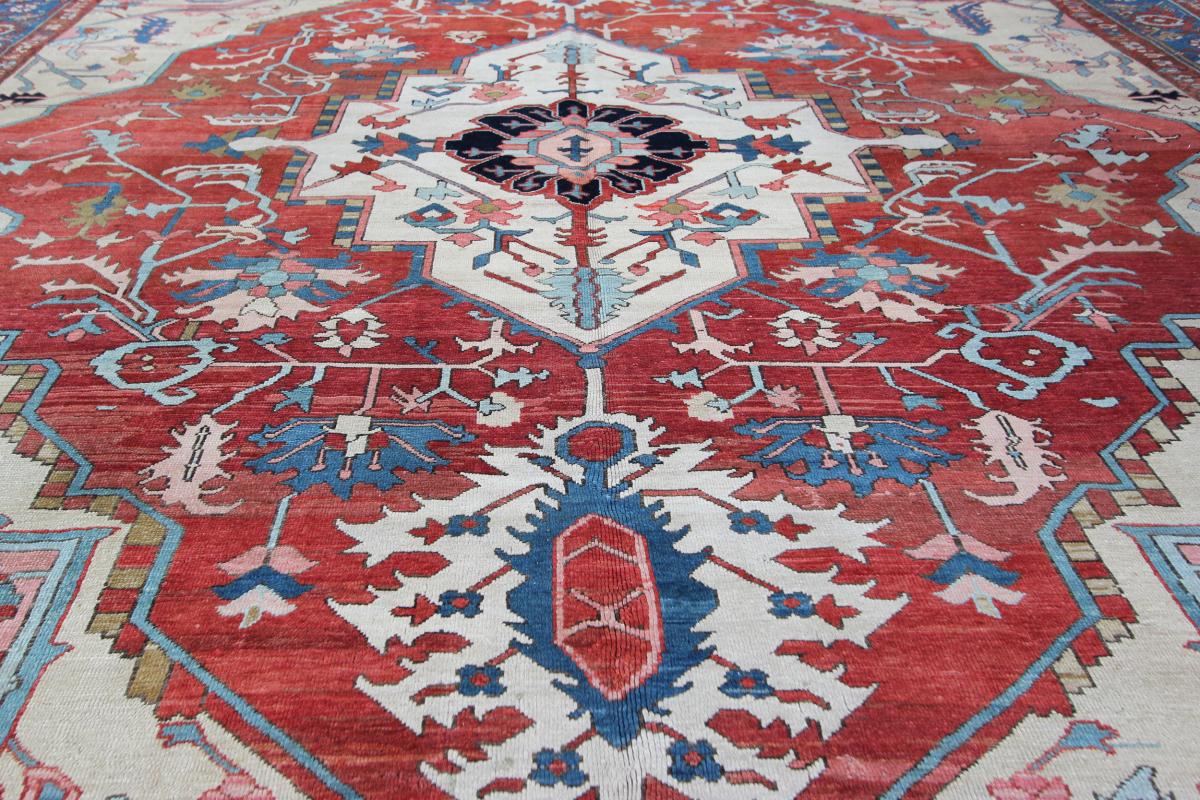 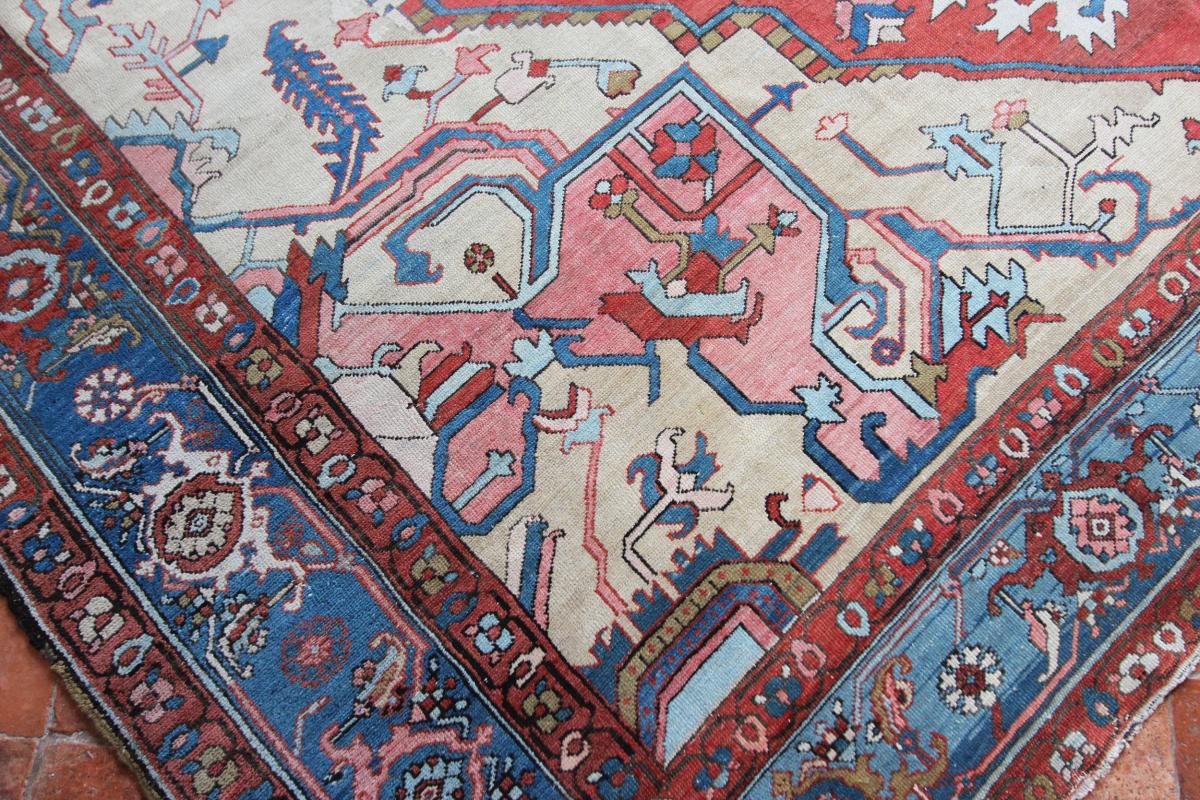 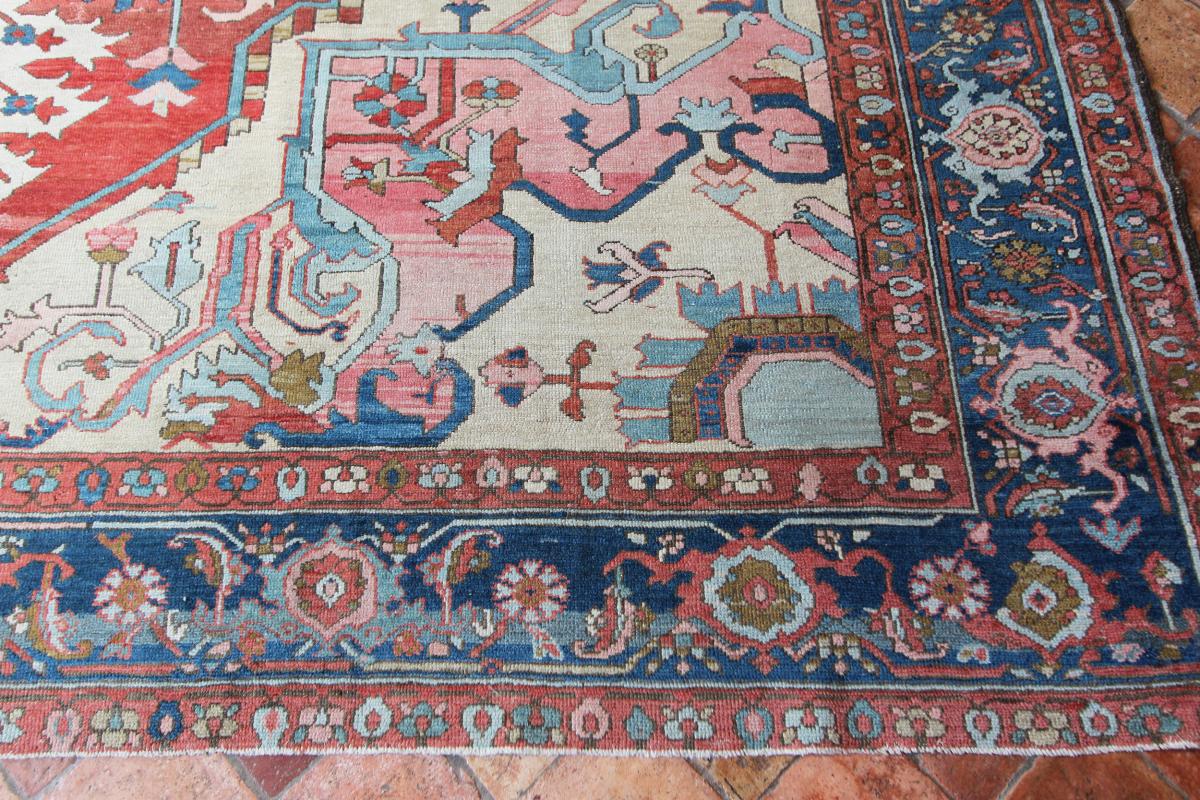 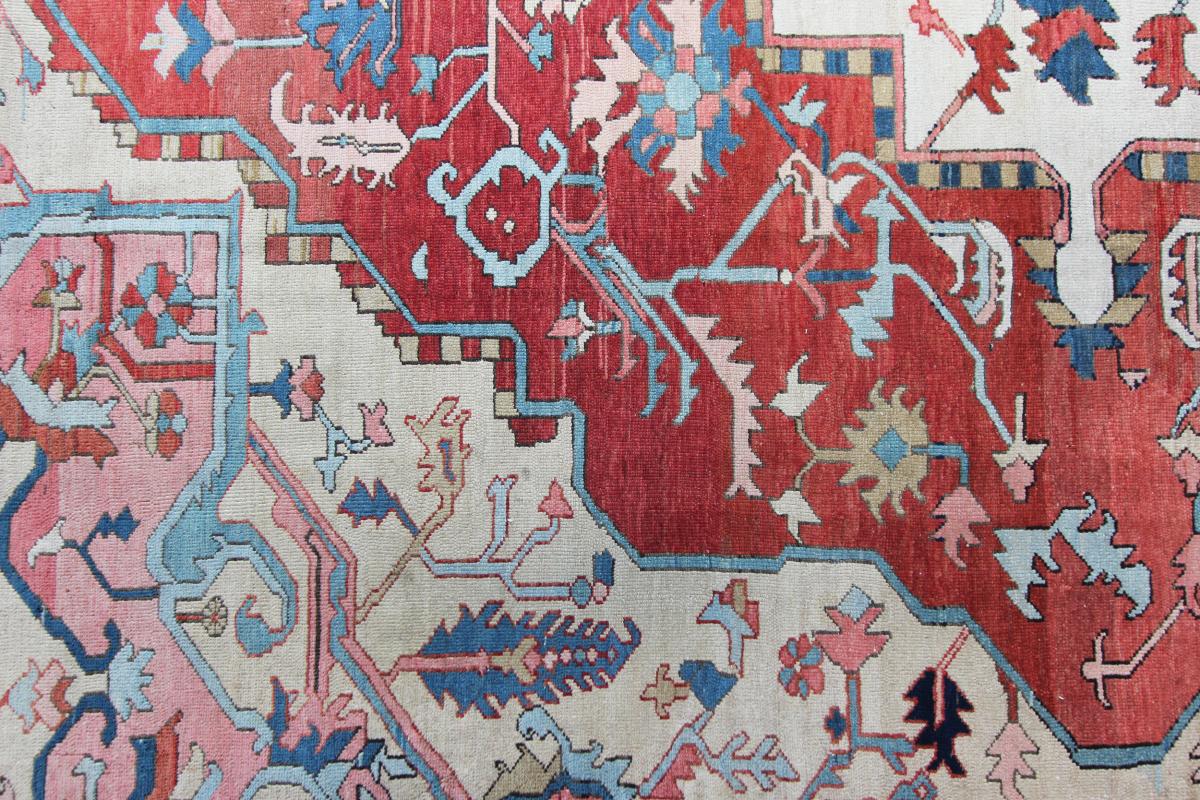 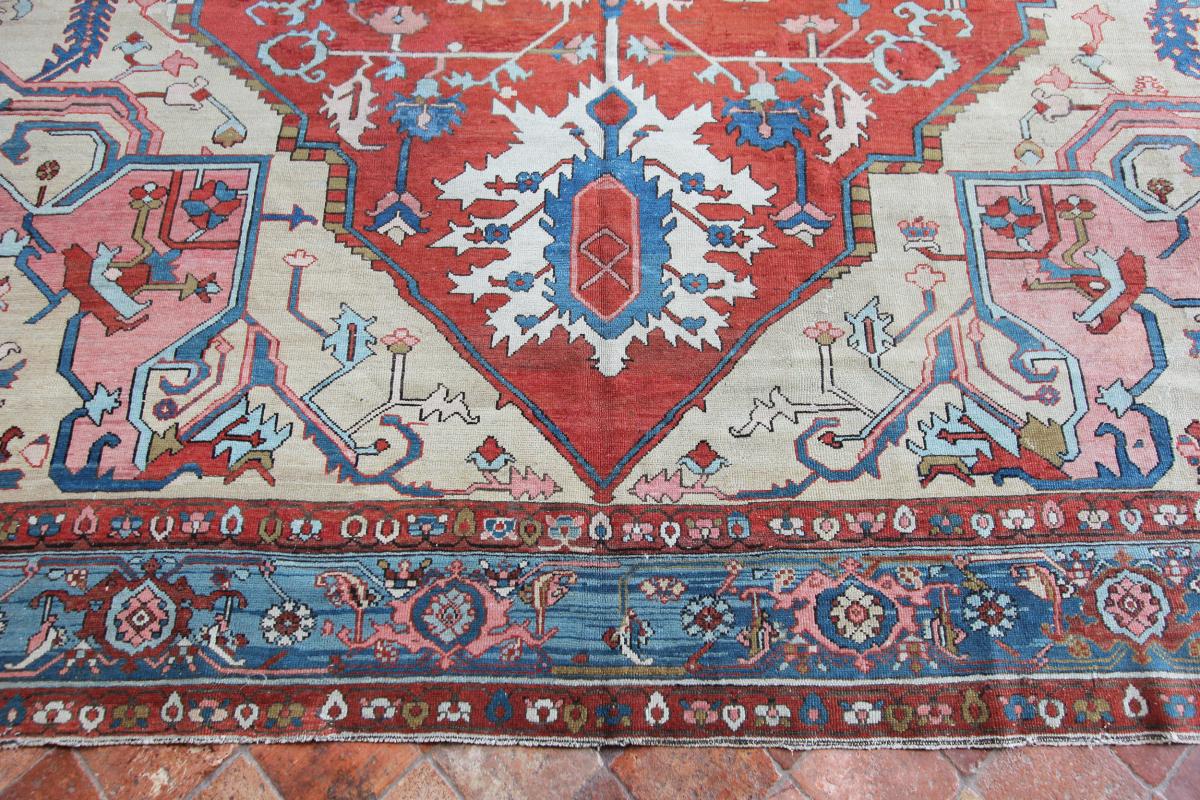 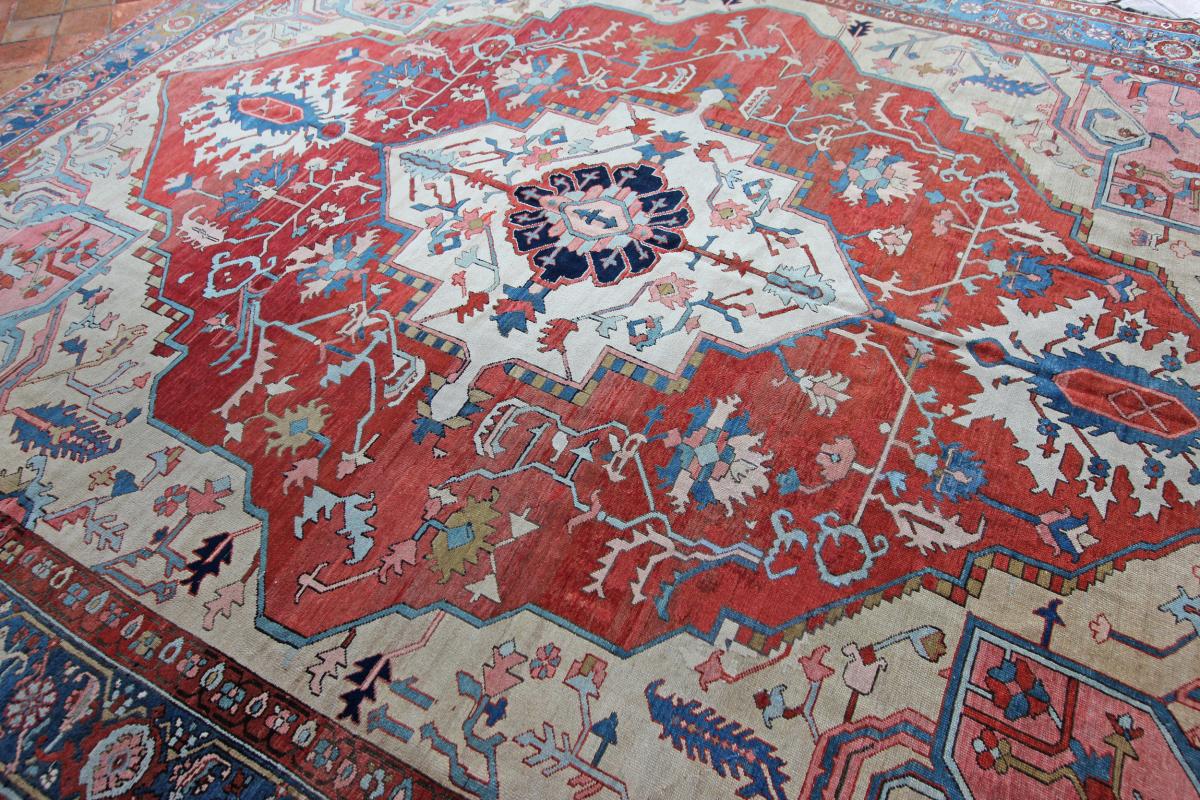 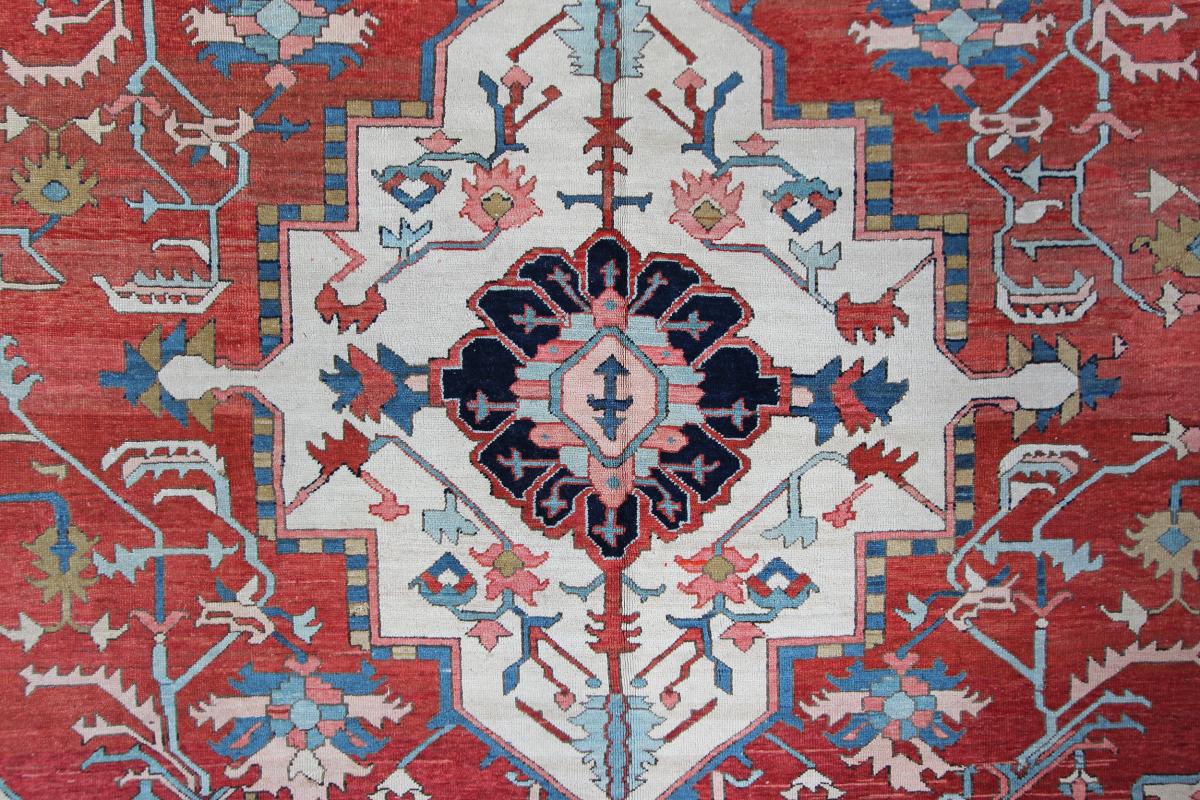 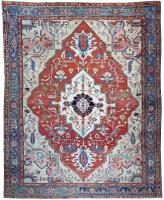 A magnificent rare antique Serapi carpet which is very finely woven in exquisite soft colours of yellows, blues and rust, in wonderful condition. The more open design with pale pinks and ivory dyes are typical of Serapi carpets from the mid to late 19th century. Stunning faded pale blues, rustic brick reds and muted pinks famous for these earlier tribal carpets from Heriz in Northern Persia.  The ivory medallion with large ivory flowers float beautifully on the brick reds.

Antique Serapi carpets are more intricate finer tribal weavings of the Heriz region hand-woven by Azerbaijan Turkish inhabitants close to the city of Heriz in North-West Persia. They are famous among collectors because of their vivid vegetable dyes or soft earth tones that are woven on a geometric pattern. In terms of design, drawing, and coloration as well, Serapi carpets are clearly part of one and the same tradition as Heriz, despite being a distinct antique rug style, which originated as a Northwest Persian adaptation of early Sarouk Farahan medallion, but with a more geometric, abstract, village sensibility.

Like Heriz, Serapi carpets have a multiple concentric medallion format that emits jutting branches or vines ending in large stylized palmettes, leaves, or flowers, with framing cornerpieces at the periphery of the field. The main border is usually some variant of the ‘turtle’ vinescroll pattern. In terms of design, what distinguishes Serapis from Heriz carpets is once again their more refined approach. The articulation of the medallions is crisper, more finely linear, and open, the highest grade in terms of weave, and very probably the oldest type in terms of age. Heriz carpets are generally coarsely woven with as few as 30 knots per square inch. They also have a deeply depressed warp structure with a markedly ribbed back surface. Since the early twentieth century they have come to make use of light blue cotton wefting. Serapis, in contrast, have a higher knot count, sometimes attaining 80 knots per square inch. Their backs are relatively flat, and they have ivory cotton wefting. Generally they have a softer floppier handle than Herizes, and they are thinner

On the whole, it appears that what we call Serapi carpets are simply the oldest, most well-designed, and finely woven Heriz carpets with softer colours than the 1900-1930 pieces.

We offer the service of viewing any of our carpets & rugs in-situ in London, Surrey, Hampshire the UK & Europe by appointment.  Having helped private clients and interior designers since 1990 we would love to assist you too, please contact us in your preferred way.

The condition is extremely good, with a finely cut medium wool pile height.  Some old areas of preservation are apparent in places, but no major repairs or damage.  This carpet dates from 1870-1880 and is in excellent order for its age of around 150 years old.  A rare and collectable Serapi, these early carpets still command high prices in the US and across the world in top auction houses.  Visit our barn showroom or request a home viewing to see this Serapi carpet up close with a private viewing.