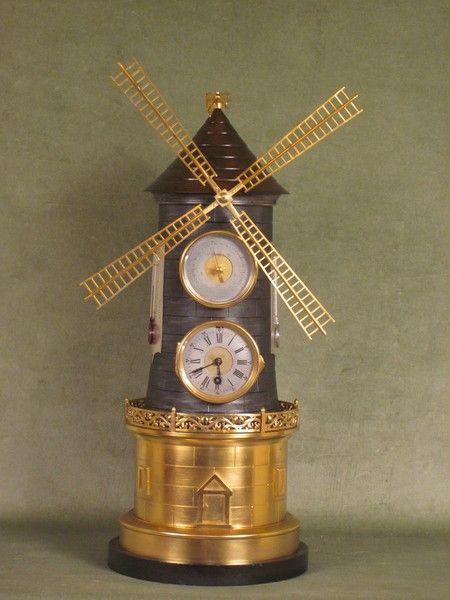 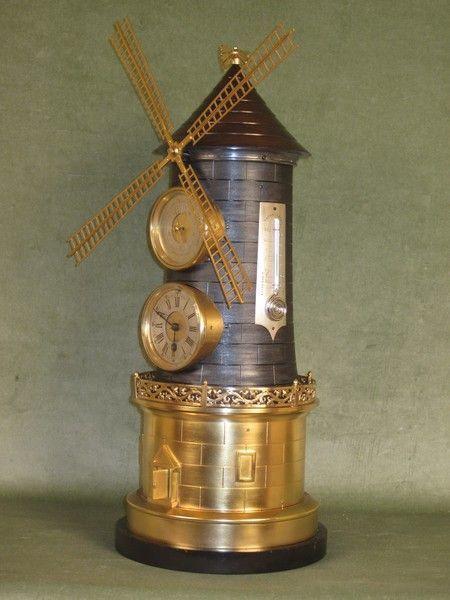 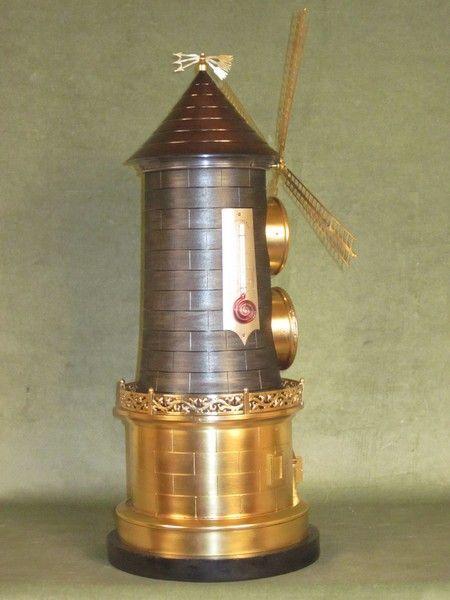 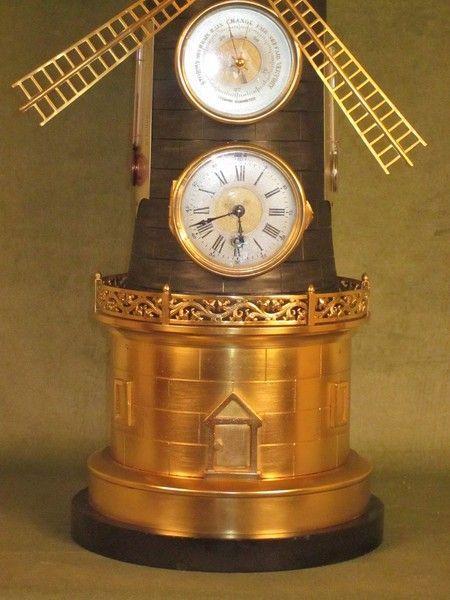 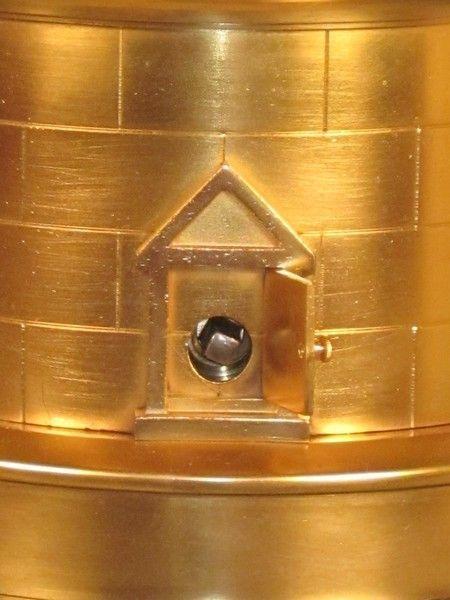 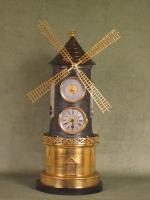 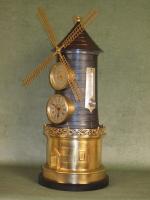 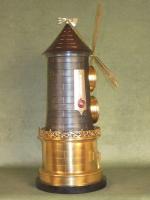 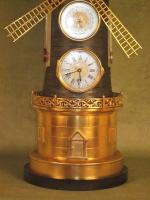 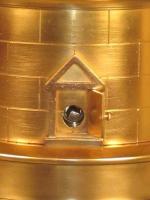 An excellent example of a rare windmill clock by the famous Parisian horologist André Romain Guilmet. The circular base is of black stone, above which is the gilded lower portion of the windmill with attached windows and a door which opens to reveal the winding arbor to operate the sails. The bronze higher portion of the windmill is decorated with simulated blocks and surmounted by a gilded weather vane.
To the front of the windmill are two dials, one for the eight-day duration timepiece clock and, above it, another showing the barometric pressure. Either side are two thermometers, one showing Centigrade and the other Fahrenheit. Immediately beneath the roof of the tower is the arm from which the rotating blades of the windmill sails rotate.

Derek Roberts notes: This clock, with all the detail on the base and the delicate arms of the windmill, was expensive to restore and therefore must have been very time consuming to make.

André Romain Philéas Guilmet was an obsessive inventor who took out many patents for designs, both horological and others.

It was he who in 1868, in collaboration with Edouard Meyer, first placed a driving chain on a bicycle, set below the seat to drive the rear wheels, and so produced the first bicycle powered in the method that is standard on all machines.
Quite possibly the clocks that Guilmet is most known for are the form of mystery clock where the pendulum hangs from the arm of a female statue, sitting atop the clock movement which is set within a marble base, and with no apparent means of power swings almost imperceptibly to keep the clock ticking. He took out a patent for this movement, number 78311, on the 30th of October 1867 and featured an example on his stand at the Paris Exposition of that year, where it was remarked in the Revue Chronométrique that: ‘No other exhibitor excites the curiosity of visitors to the Exhibition to the same degree as M. Guilmet. In front of a female statue, sitting on top of a marble clock, the hand holds a pendulum oscillating without apparent reason. There is no revelation within the pendulum as to the skills of the author of this new form of perpetual motion and there is a never-ending selection of comical remarks, the funniest finding themselves entangled in endless explanations.’
Guilmet also produced a number of clocks of an ‘industrial’ nature, including a beam engine, a steam hammer, the stern of a ship and a boiler amongst others.

There is a large amount of detail in previous research into Guilmet, and which doesn’t require repeating here, including that he was born on the 10th of December 1827 in La Ferte-Gaucher, a town some miles from Paris, to parents Philéas Germain Guilmet and Claire Bourrrienne.
I have since managed to unearth some new material, a summary of which is as follows:
The first recorded date I have found for Guilmet is in Paris in 1854 where he is described as the successor to the horloger Marchal jeune (junior) at Fauberg-Saint-Martin, 103; an address that is associated with the younger Marchal in earlier records. Marchal aîné (elder) is also known to have worked as an horloger, at Faubourg-Saint-Antoine, 111, and was still there at the time that Guilmet took over his son’s business. It is interesting to note that his name is spelled incorrectly in the 1854 Bottin Almanach, ‘Guillement aîné’, although that it is him is proven with the wording that follows his name; ancienne maison Marchal jeune. In this write-up he is described as ‘habillage de montres, de bijoux, remontage de pendules à l’anneé'; dress watches, jewellery, and clocks that run for a year.
In 1855 he married Marie Augustine Leblond, whose sister was to marry Eugène Farcot the following year; Farcot being another fine maker of mystery clocks, those with figures on a base holding a pendulum with similarities to those made by Guilmet. When examining the clocks of these two makers it is obvious that the two worked closely together.
By 1861 he had expanded the business premises with the addition of number 108, whilst his son is now recorded at number 105 as a 'lemonadier'; café owner, a business sold on to Peyer by 1863. At this time Guilmet Snr is recorded as not just an horloger, but also a bijoutier (jeweller) and doreur (gilder). Under the entry for Doreurs in this 1861 almanach he is described thus: horloger, bijouterie, orfeverie argentes de la maison Christolfe, Fbg-St. Martin, 103 et 108; an horologer, jeweller and silversmith supplying the well-known Parisian jewellers and silversmiths, the Maison Christolfe; the additional entry under Horlogers describing him as a clockmaker only.
Guilmet was an active member of the Chambre Syndicale, along with A.H. Rodanet, Paul Garnier and other well-known horologists where interestingly in 1878 he, along with Japy, proposed that a new ‘adherent’ be elected to membership; being Marchal of rue Charlot, 83 now the new address for Guilmet’s business as can be seen in the advert from the Revue Chronométrique of 1888 below.  Obviously, the connection with the Marchal business was still going strong, this Marchal being the grandson of the one that Guilmet succeeded twenty-four years previously.
Also, that year he presented a prize to the Chambre to be awarded to an ‘Apprentices Horlogers’; being the 4th Prix Un Traite d’horlogerie won by Auguste-Alecxandre Trulent from la Maison Theodore Leroy, who put forward ‘Un axe de balancier pour chronometer de marine’.
André Romain Guilmet died at Neuilly-sur-Seine on the 6th of February 1892, aged 64.

I am still undertaking further research into the working life of André Guilmet, to add to that already undertaken by previous authors, and will update this page as soon as new material becomes available.