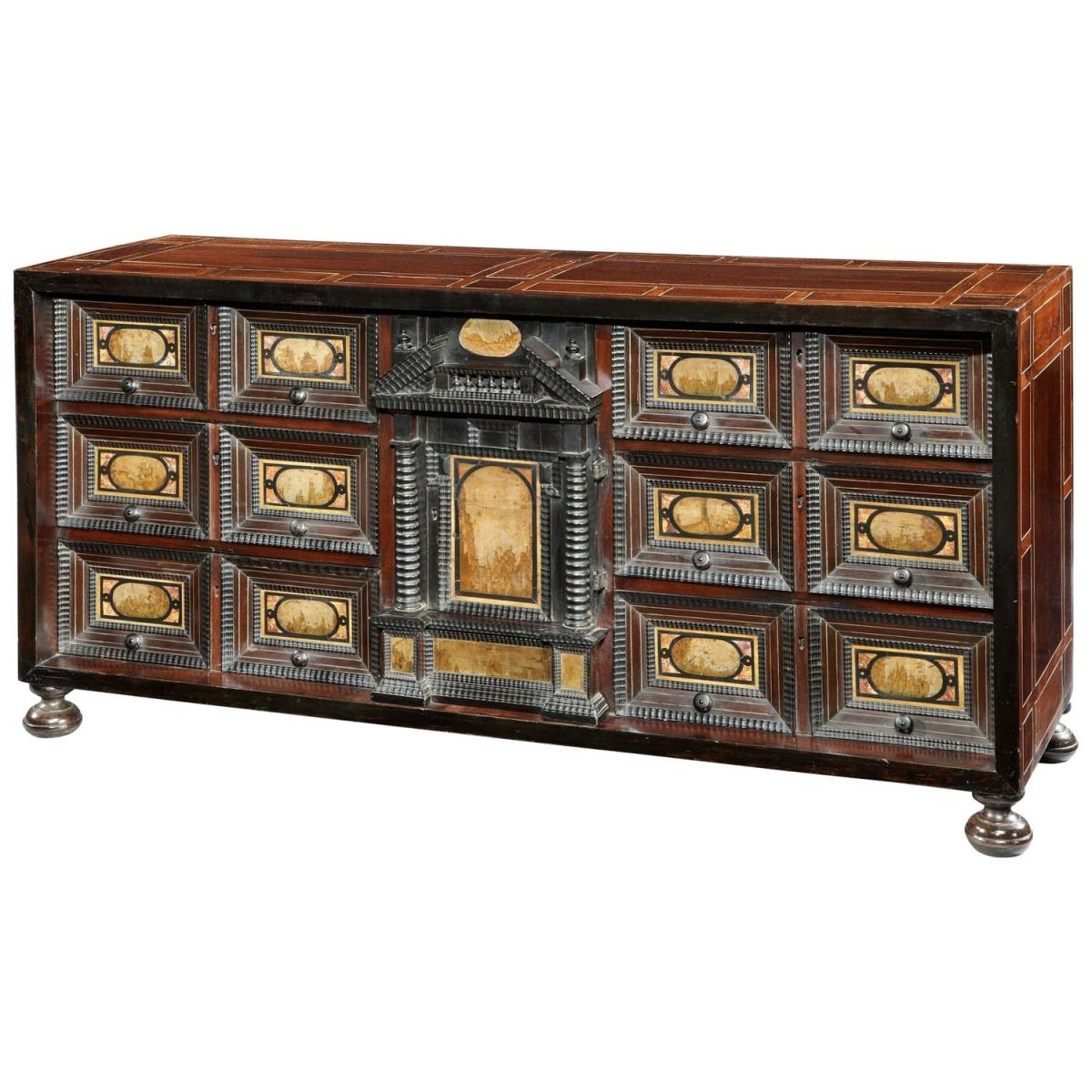 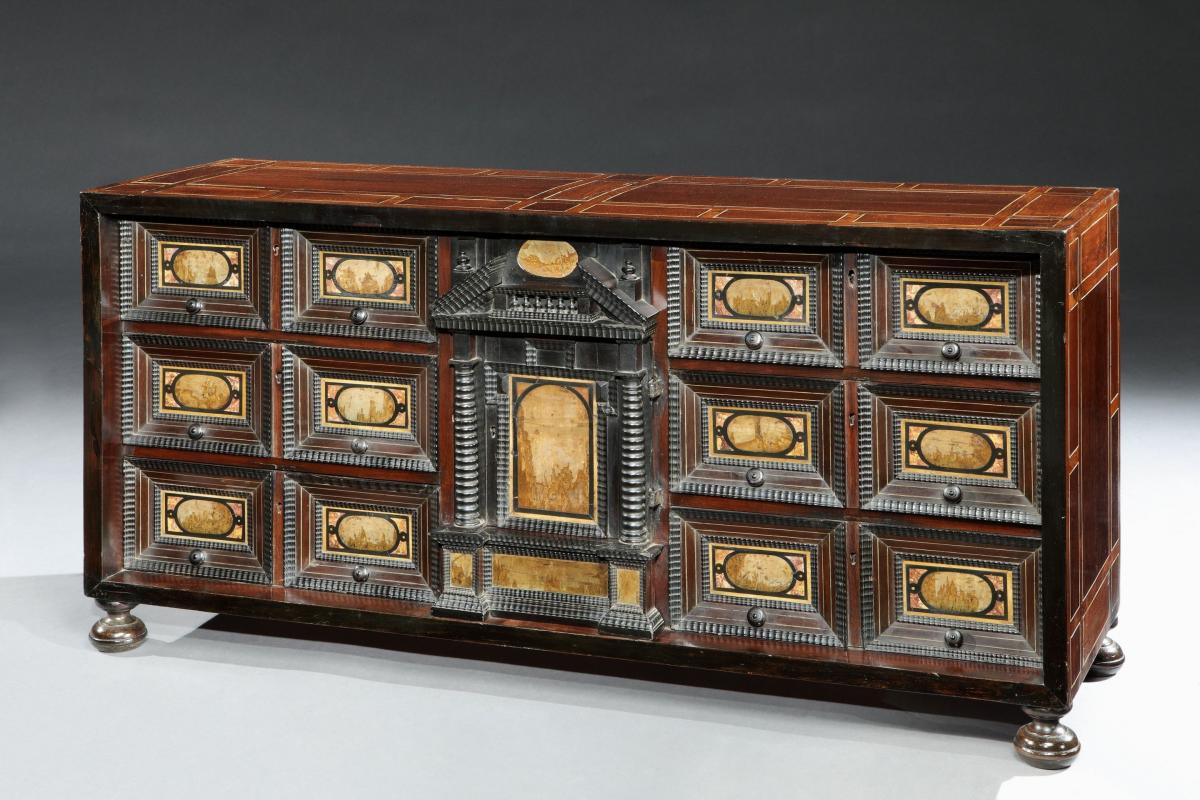 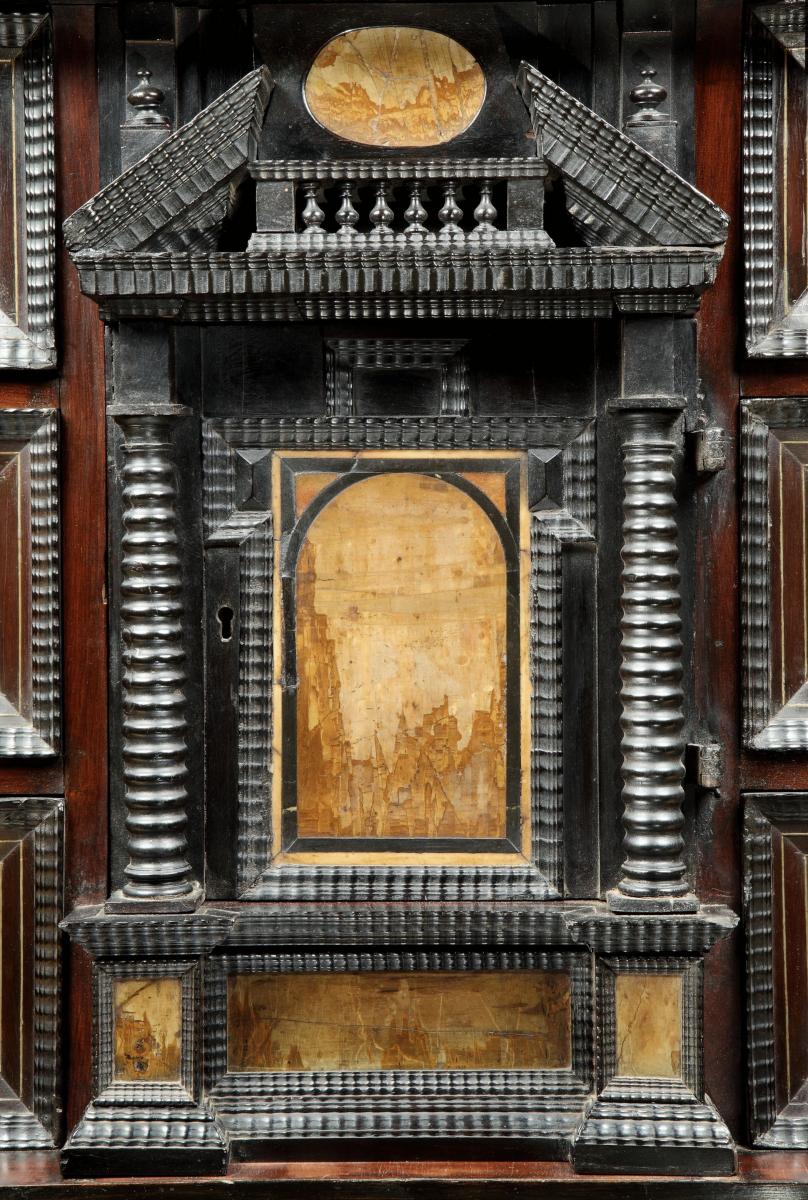 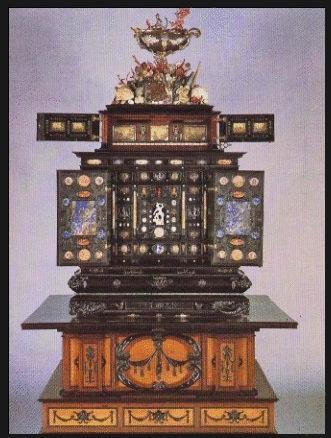 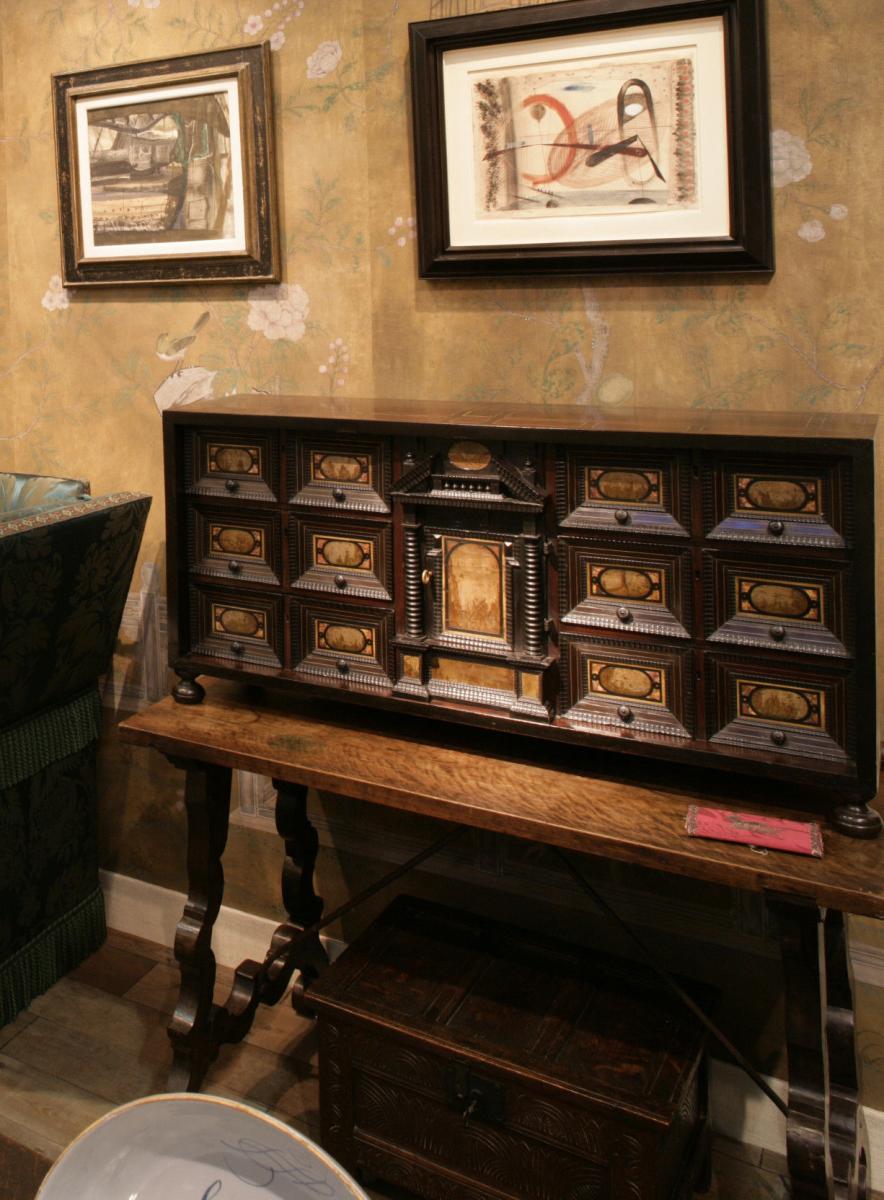 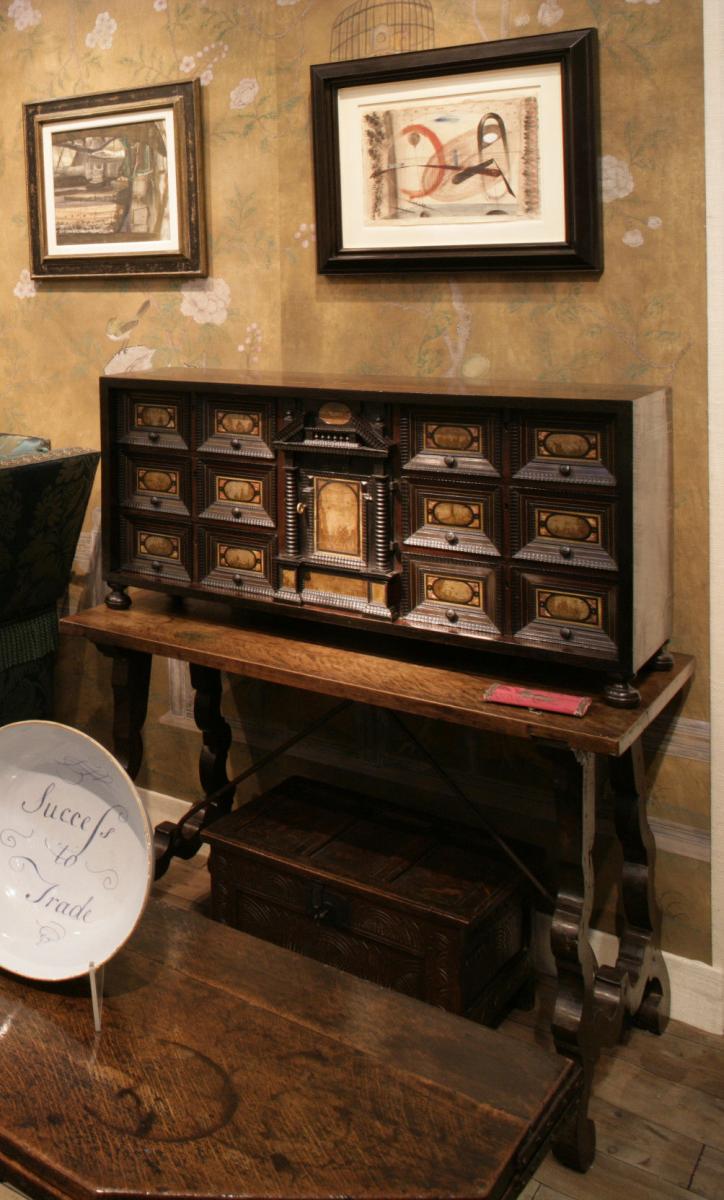 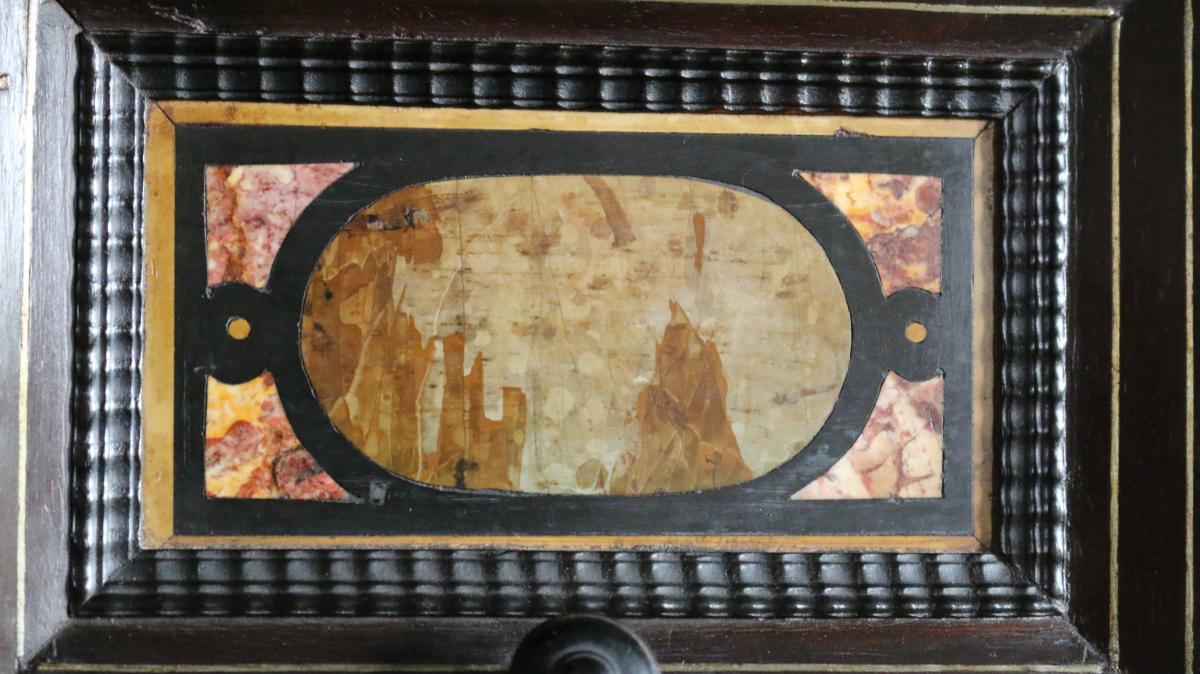 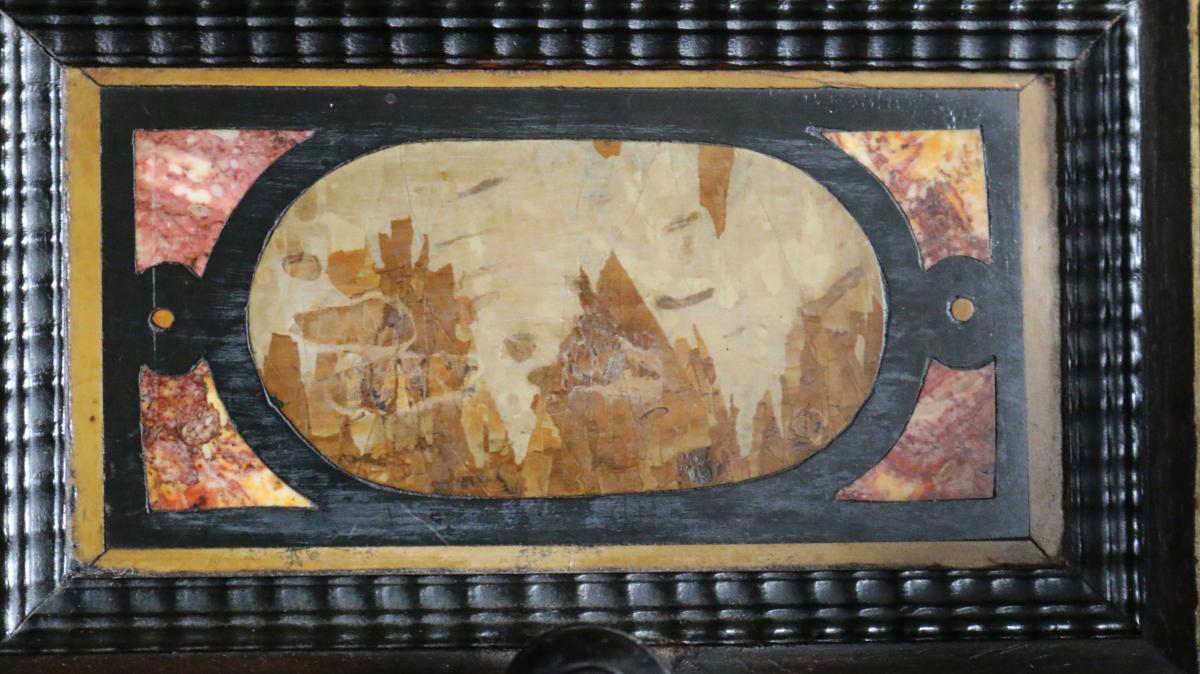 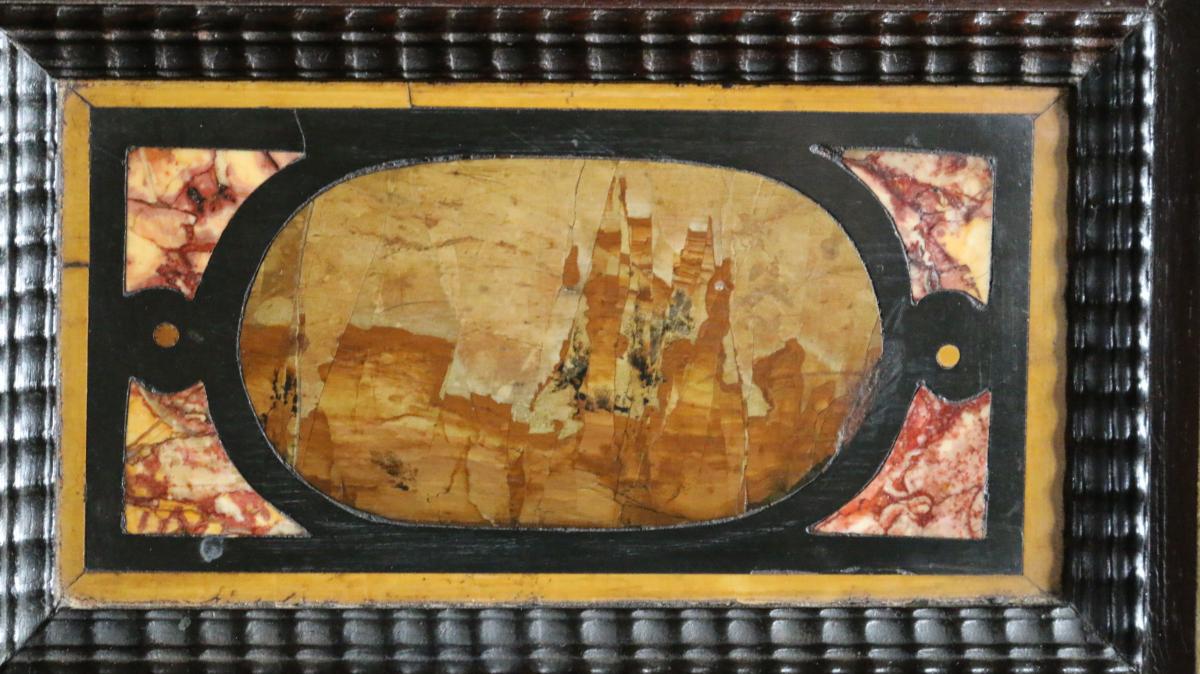 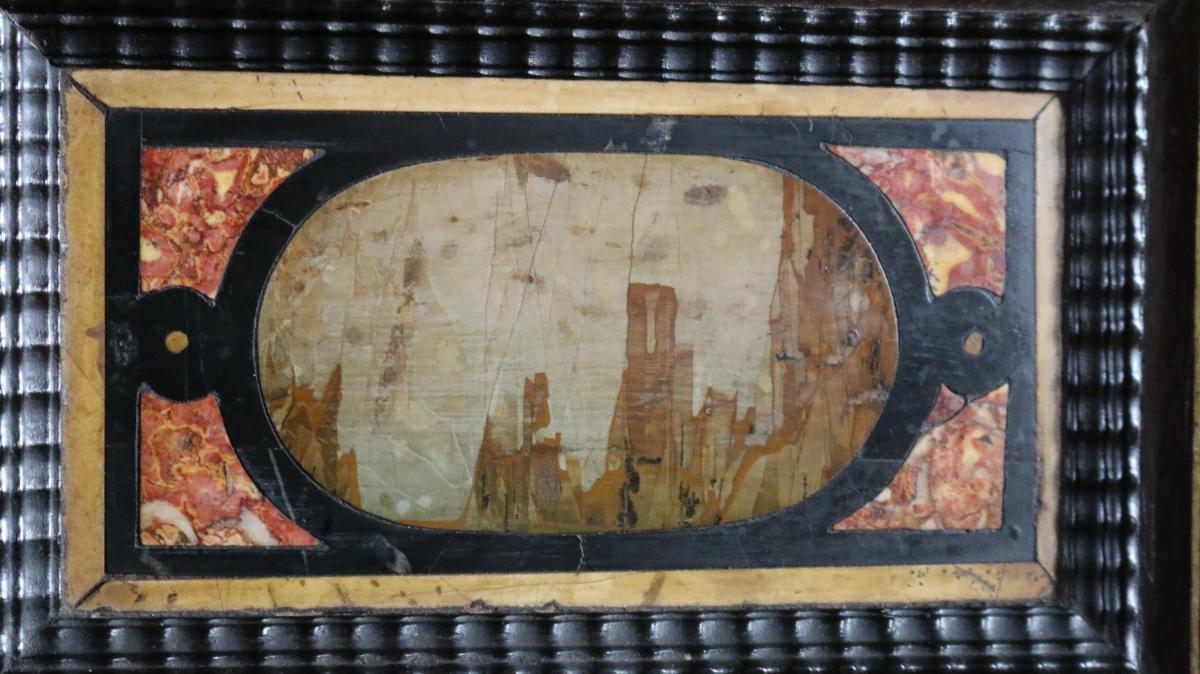 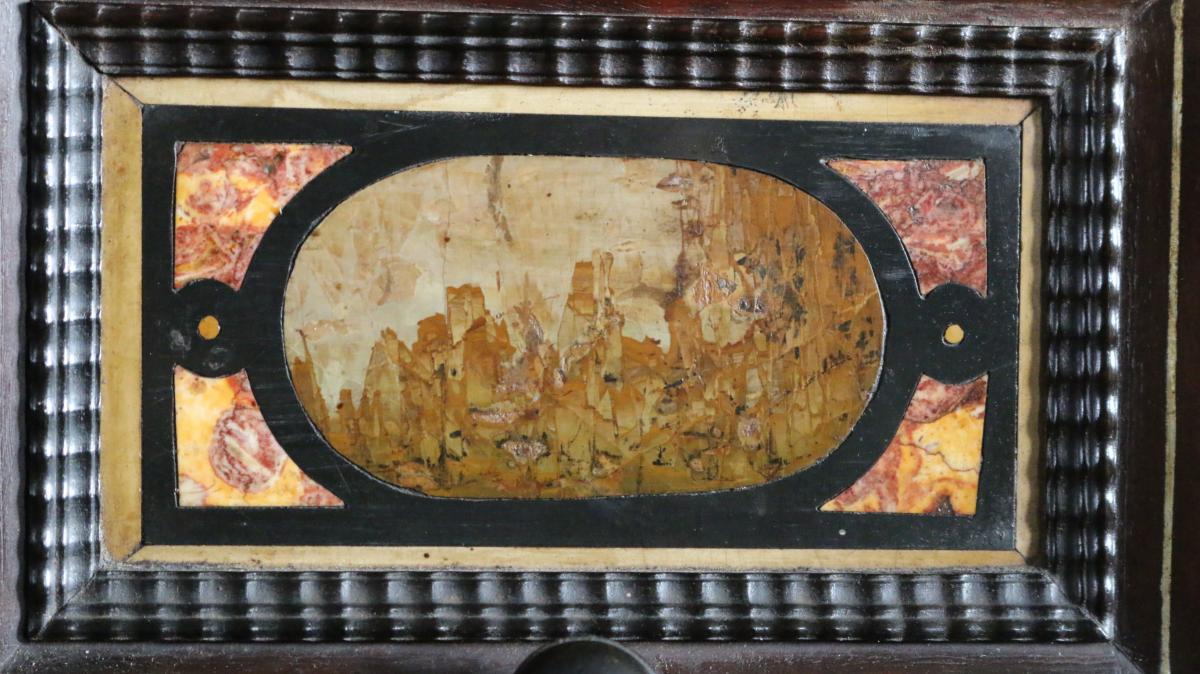 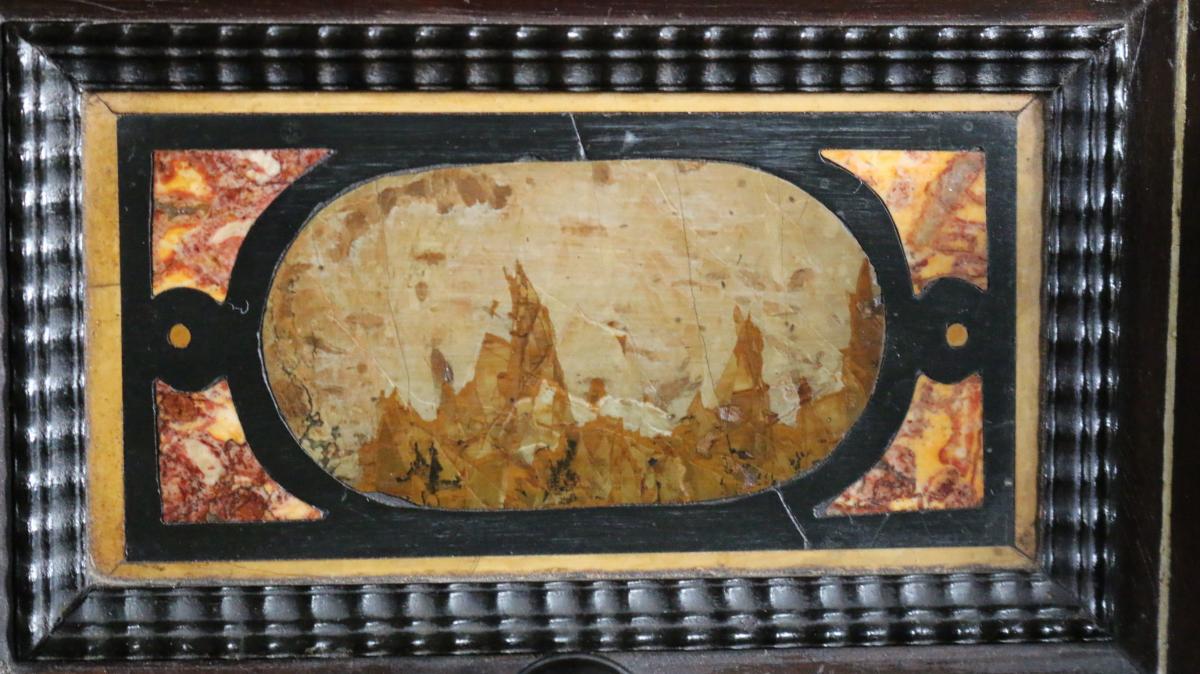 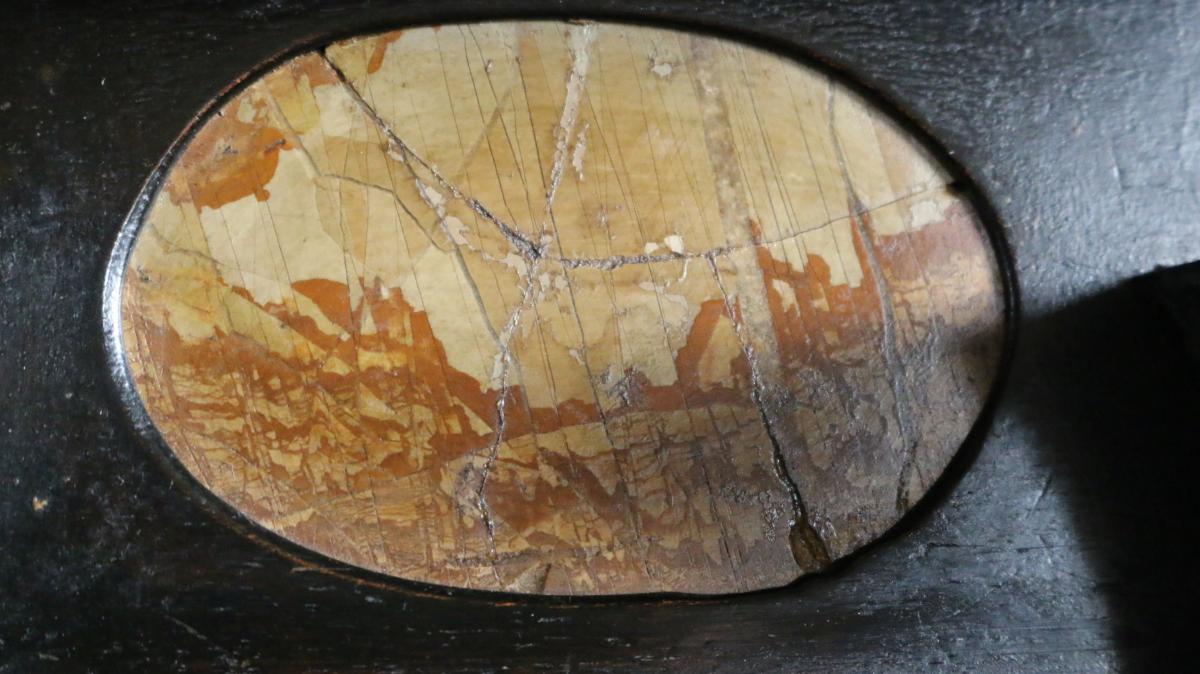 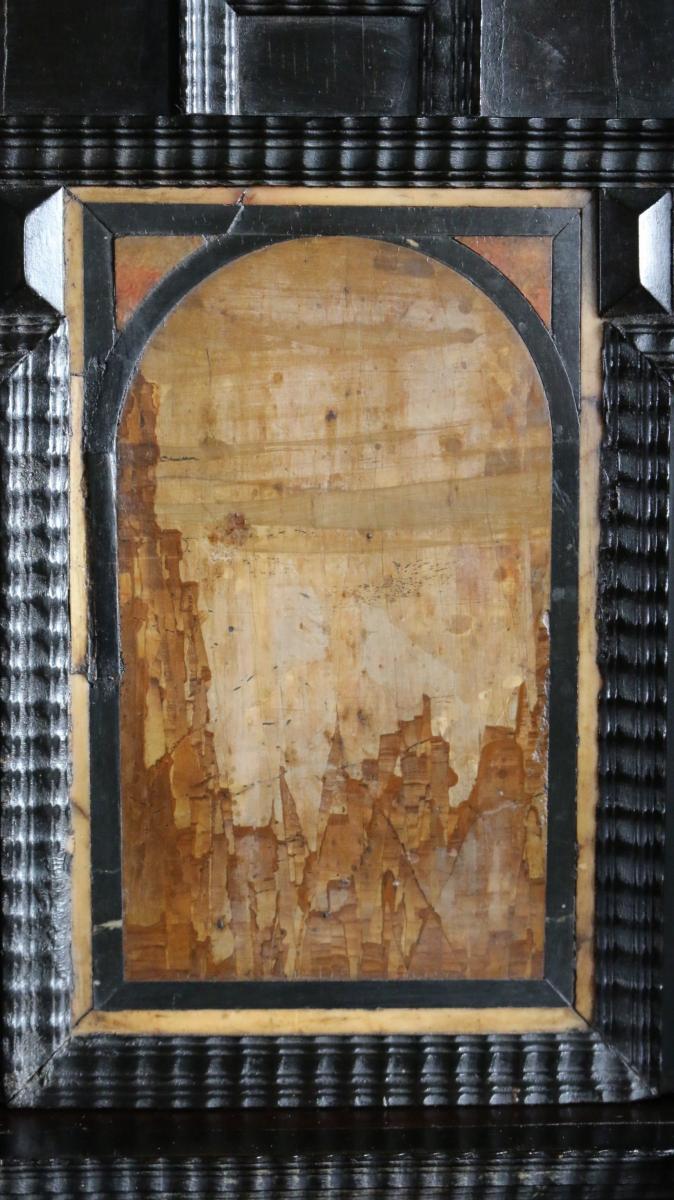 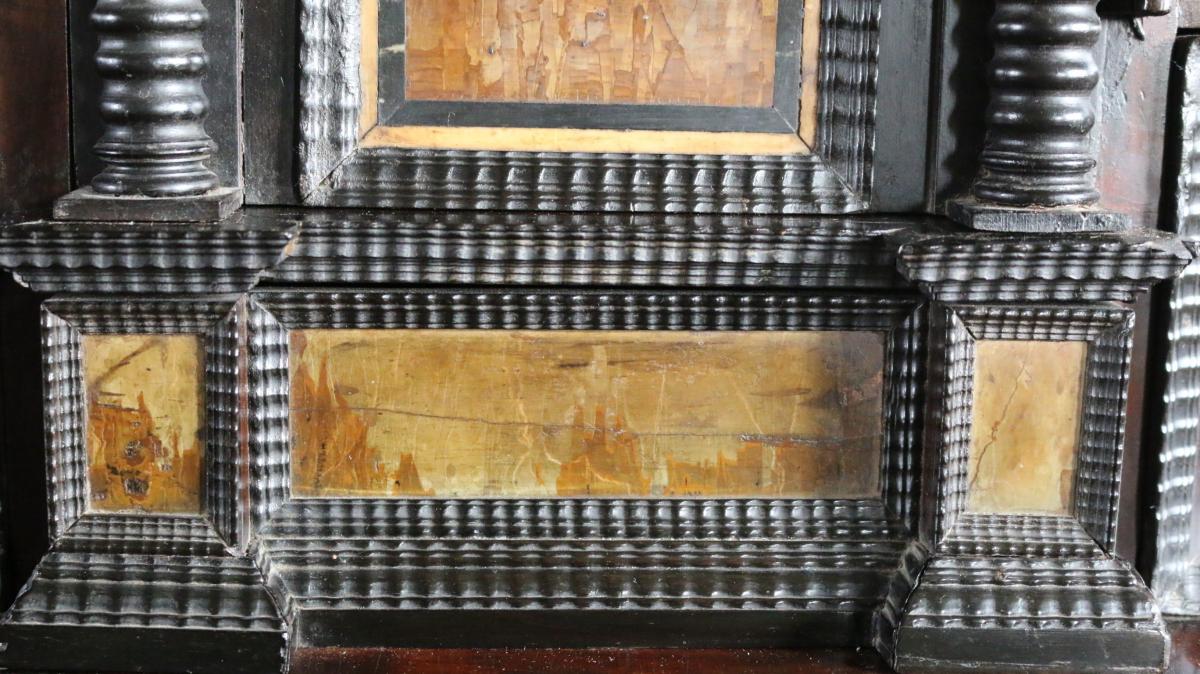 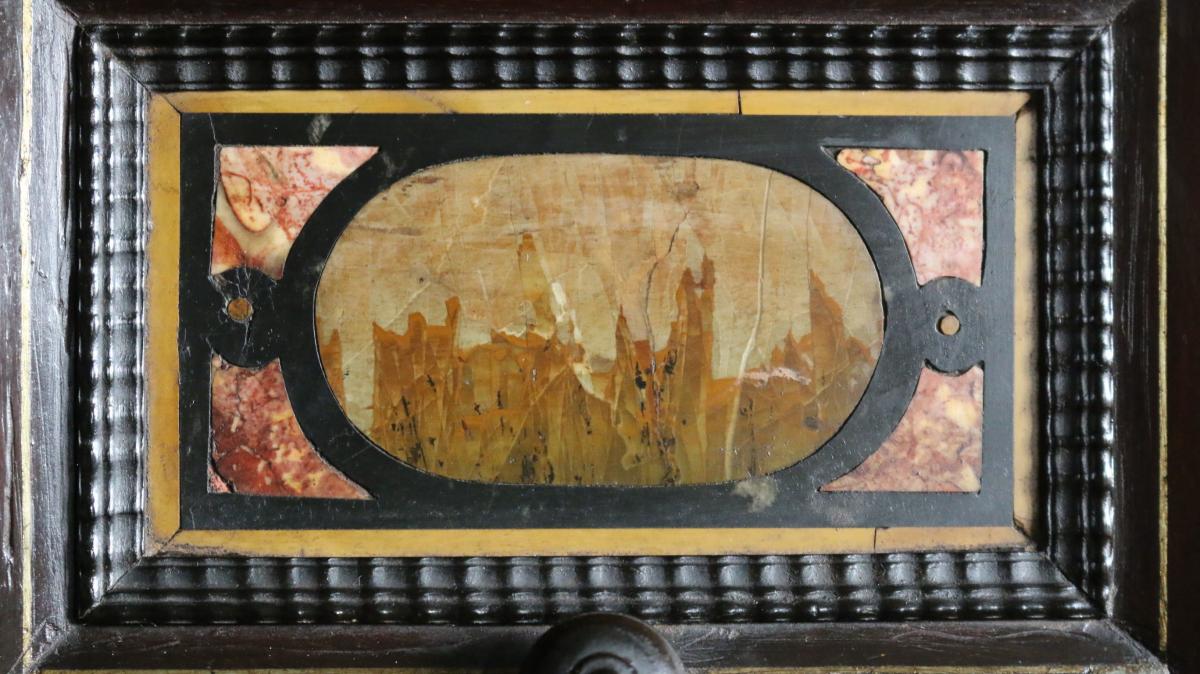 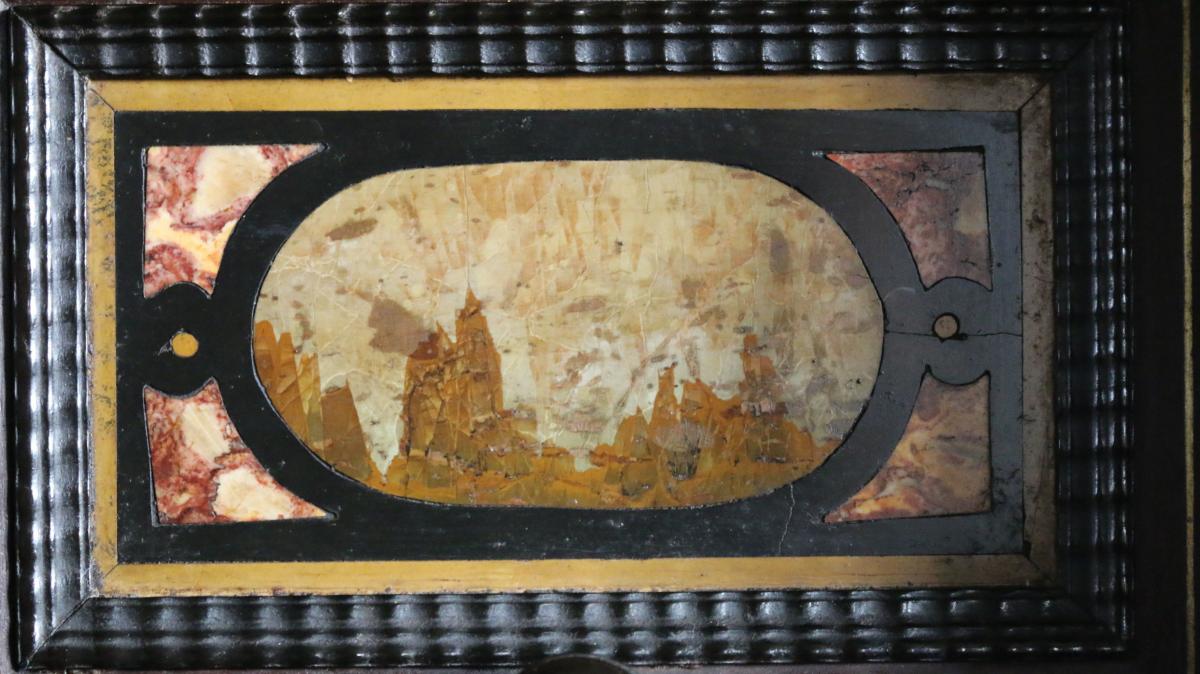 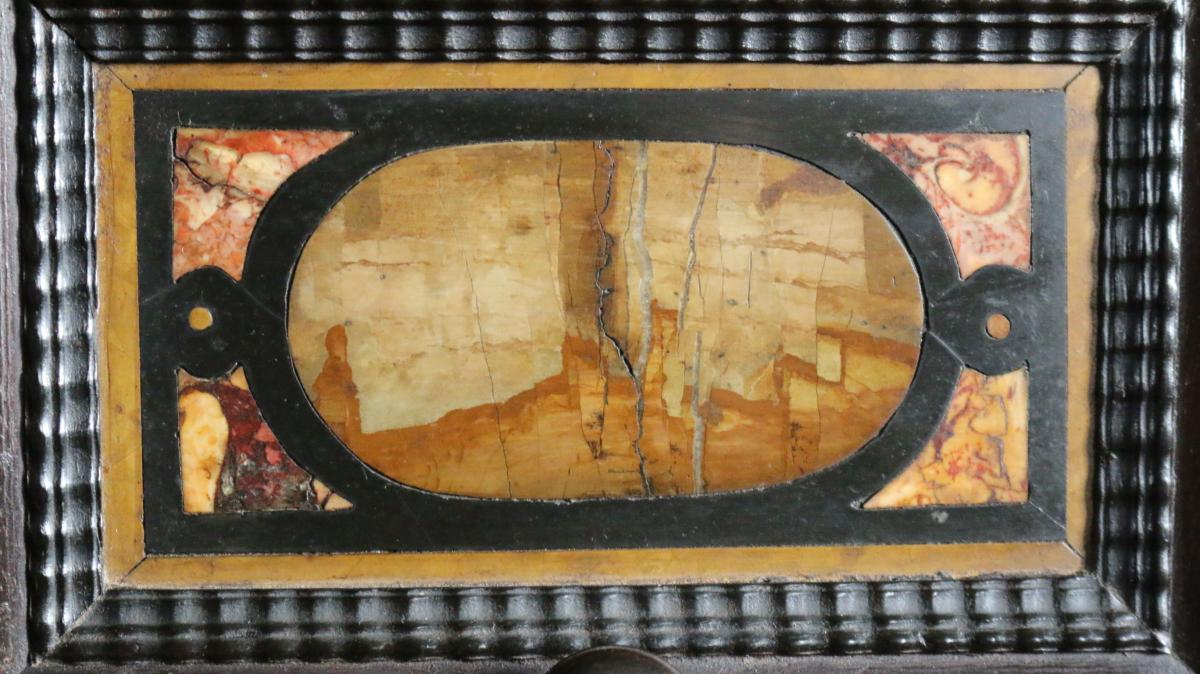 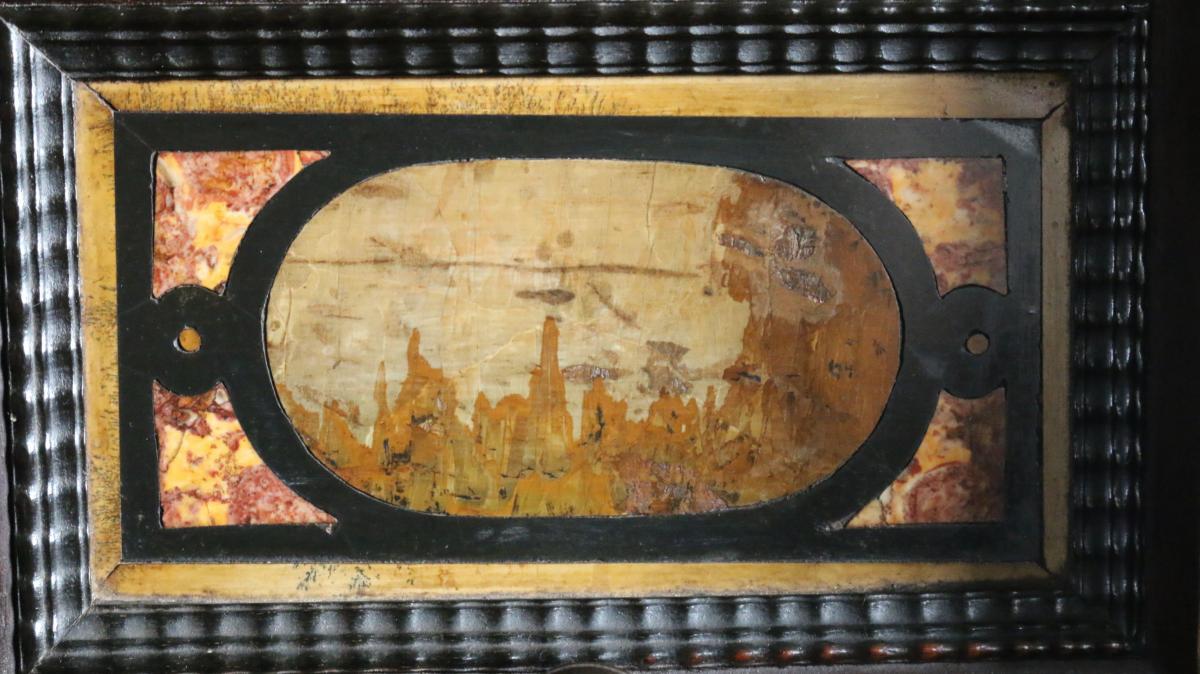 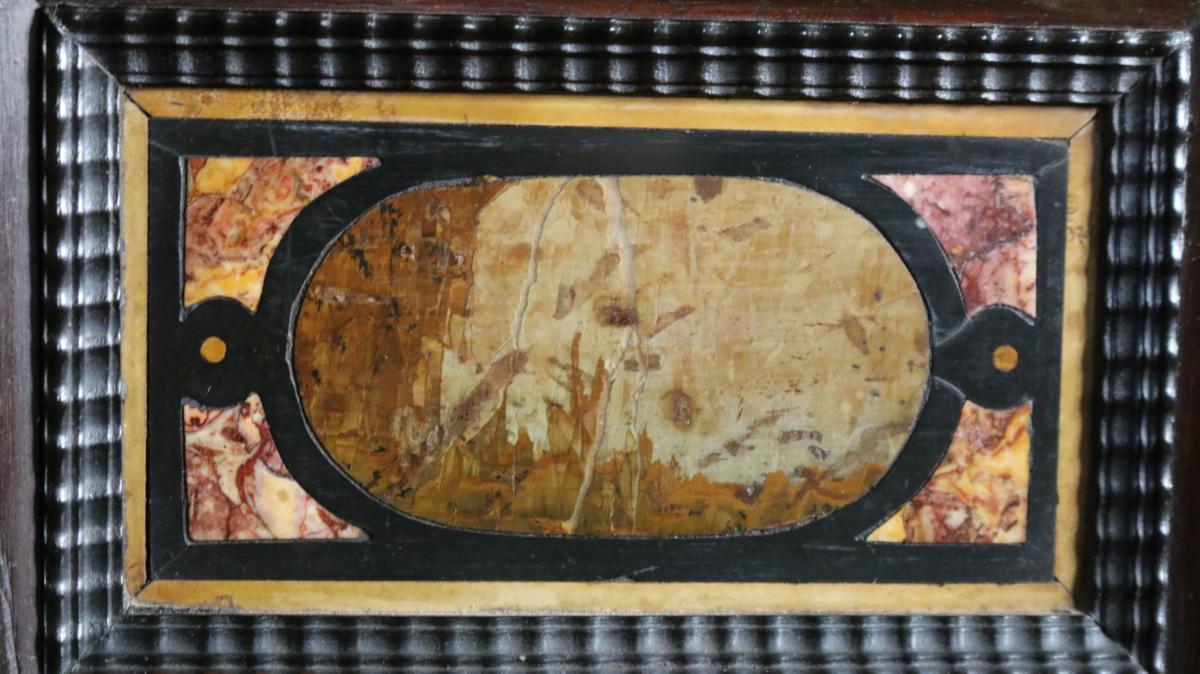 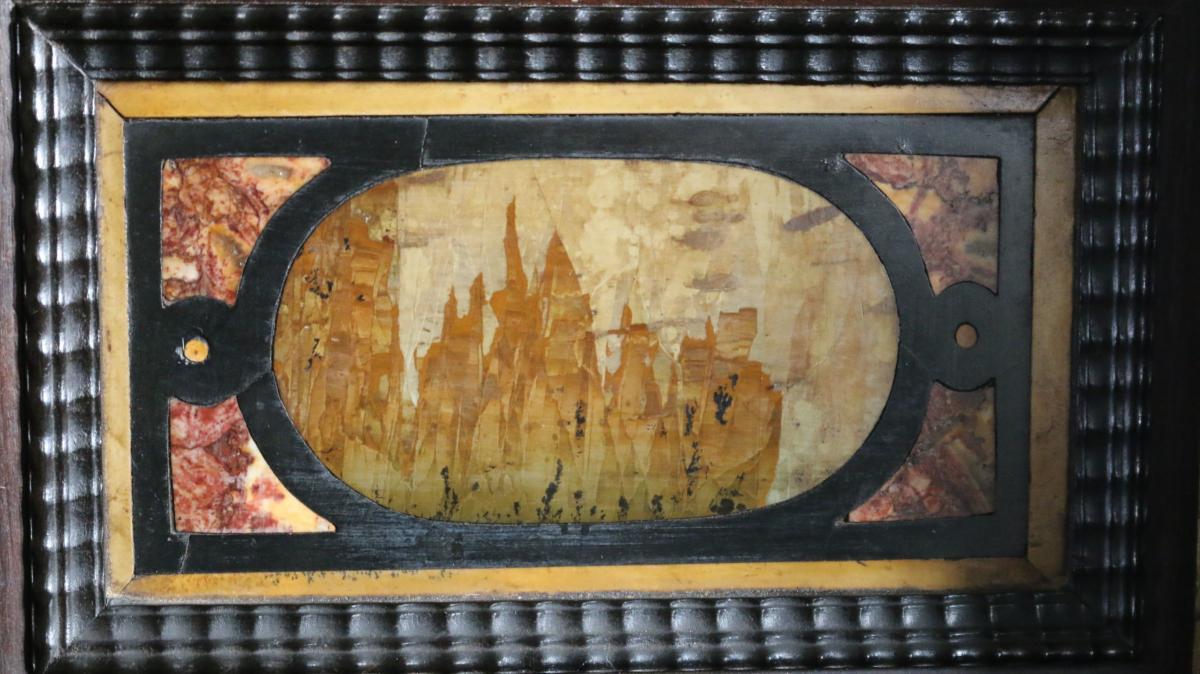 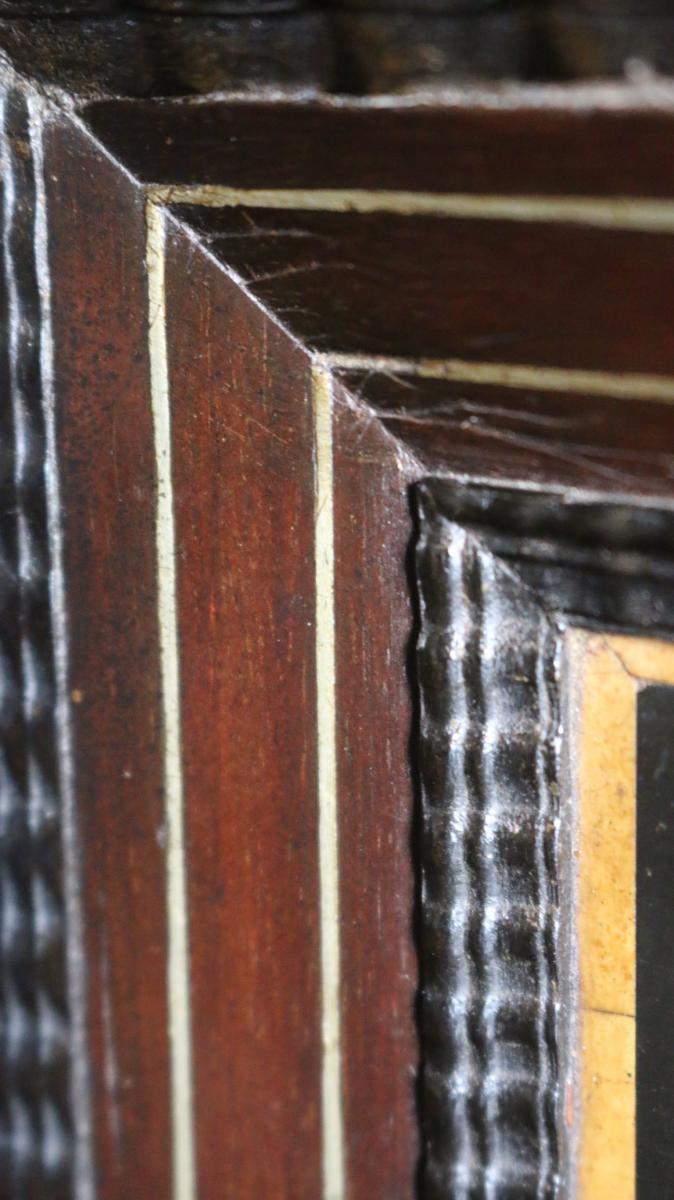 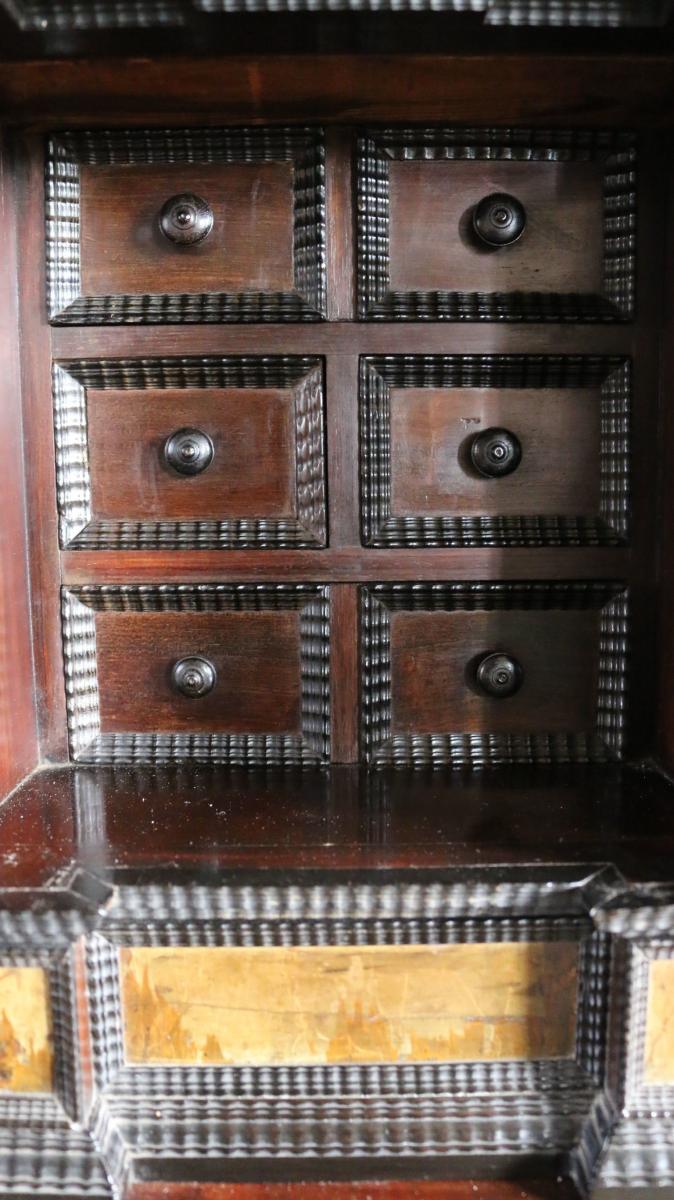 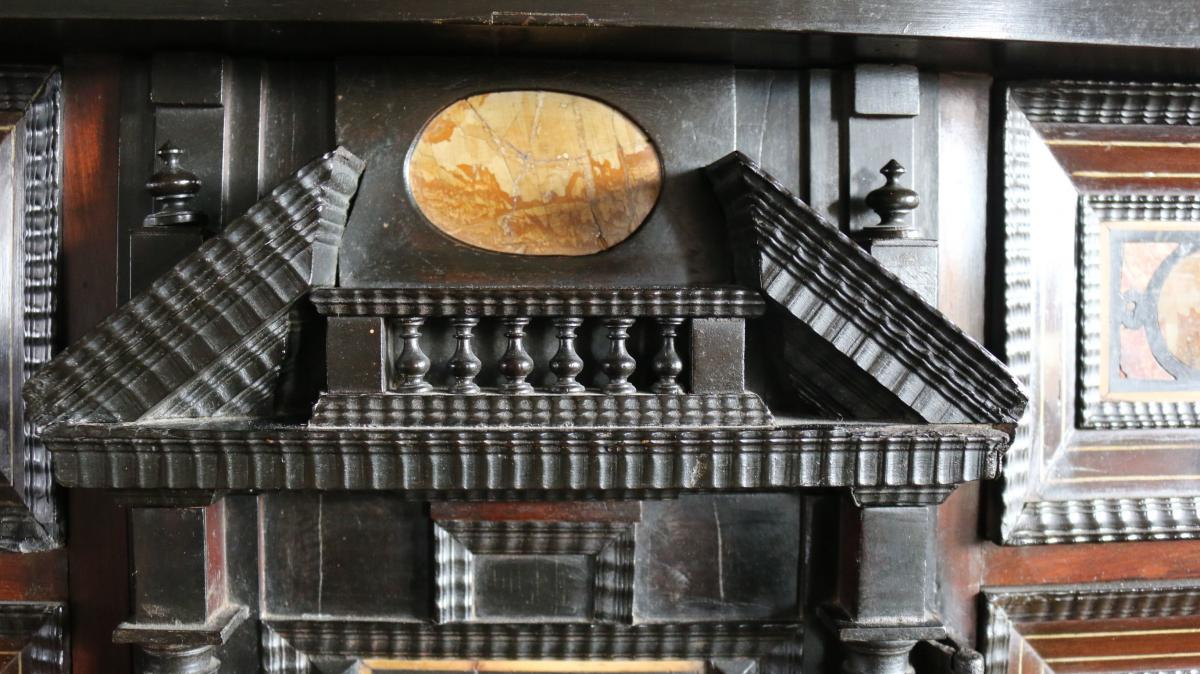 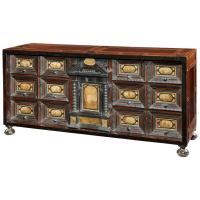 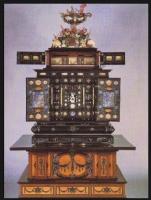 This cabinet is one of a small group that were made in the 1620’s as taste and fashion veered towards the use of a paesina stone with its characteristic evocative veining which exhibits a strong ornamental pictorial structure. The "marble" is a type of limestone, found in the Tuscan Apennine or on the island of Elba. When cut into slabs and polished it reveals a natural grain resembling mountainous landscapes, castles, and ruins. Pietra paesina, is also called “landscape stone,” “ruin stone,” “ruiniform marble,” and “Florentine marble” and has been collected for centuries.

Pietra Paesina is a silty limestone, found in Tuscany, formed during the Cretaceous period. It is a sedimentary stone mainly made of compressed limestone and clay formed in sea beds about 50 million years ago, with infiltrations of iron and manganese hydroxide which are responsible for the colourings. Although this stone has been used for ornamental purposes since ancient times, it is only from the 17th century onwards that its particular designs and its chromatic variations were appreciated and used sparingly to decorate the finest pieces of furniture.

The use of Paesina stone spread throughout Europe where it was highly regarded for its rarity as a precious ornament and was very much sought after and in demand in the Royal Courts. The Florentine artisans were highly regarded for their knowledge in identifying the intricate colours and patterning in the stone and then cutting and polishing it to reveal architectural motifs, mountainous landscapes, castles, and ruins. Pietra peasina inlay can be seen the Opificio delle Pietra Dure, Galleria Palatin in Palazzo Pitti.

The rectangular top and sides are of the cabinet are delicately, inlaid with rosewood and bone in geometric patterns with some old repairs to losses around the edges. Typically the central cupboard is executed as a tabernacle with a temple front. It has an ebony, architectural pediment with ripple mouldings and baluster turnings, and a pietra paesina oval above, revealing a drawer. The door below is disguised by a large, pietra paesina panel with black marble inlay creating an arch, faced with ripple mouldings and flanked by bold, ebony, ring, turned columns. It retains its original hinges and a period, working lock opening to reveal an interior compartment fitted with four drawers. The plinths below have three, pietra paesina panels faced with ebony, ripple mouldings revealing another drawer.

The front has six, long drawers either side of the tabernacle, each simulating a pair of smaller drawers, with pietra paesina panels within a geometric border of black & red marbles and faced with ripple and plain mouldings with bone inlay to create depth and perspective. They are all fitted with ebony knobs, have working locks, mostly original, some with replaced period locks and are lined in pine. One key operates all the locks. The carcass is pine. The cabinet stands on later, bun feet.

OPIFICIO DELLE PIETRA DURE
One of the famous artistic workshops of the Italian Renaissance, the Opificio was established in 1588 at the behest of Ferdinando I de' Medici to provide the elaborate, inlaid precious and semi-precious stoneworks. One of the masterpieces of the crafts is the overall decoration of the Cappella dei Principi (Chapel of Princes) in the Basilica di San Lorenzo di Firenze.

The technique, which originated from Byzantine inlaid work, was perfected by the Opificio masters and the artworks they produced became known as "opere di Commessi Mediceo" (commesso is the old name of the technique, similar to ancient mosaics) and later as "Commesso in Pietra Dure" (semi-precious stones mosaic). The artisans performed the exceptionally skilled and delicate task of inlaying thin veneers of semi-precious stones especially selected for their colour, opacity, brilliance and grain to create elaborate decorative and pictorial effects. Items of extraordinary refinement were created in this way, from furnishings to all manner of artworks. 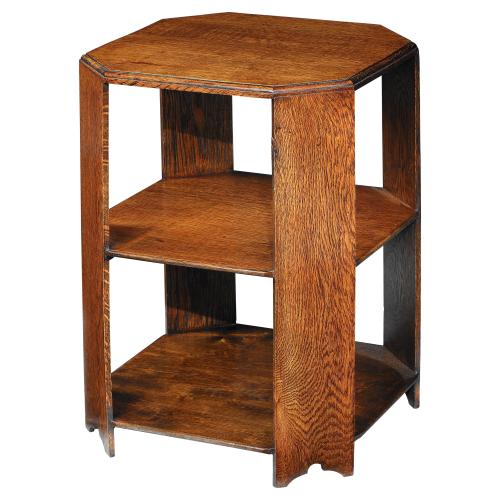 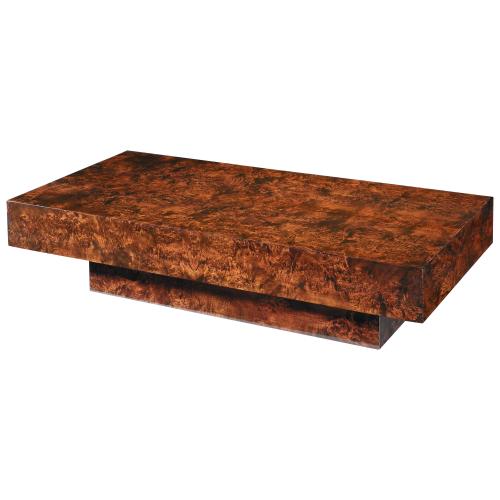 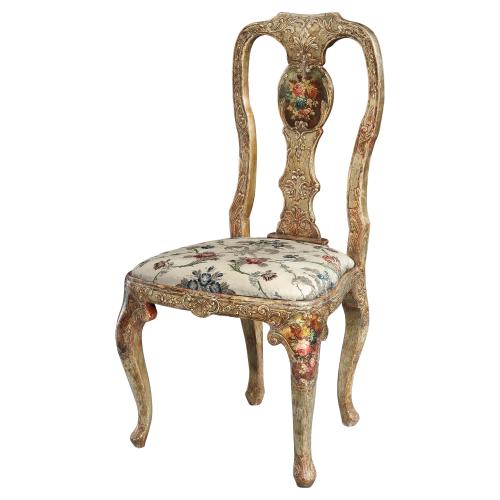