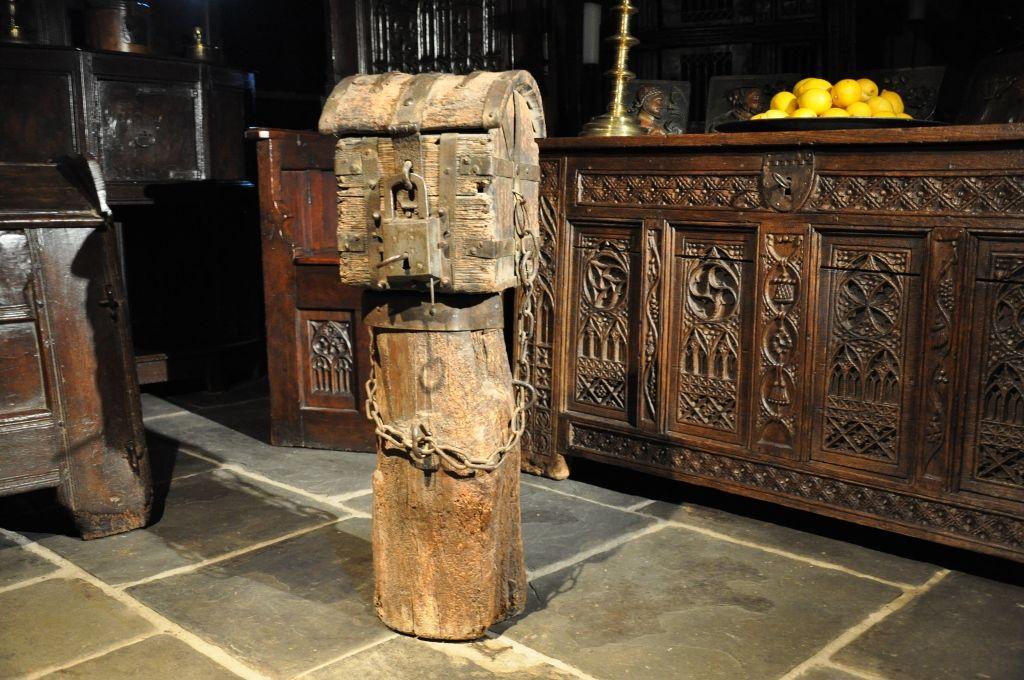 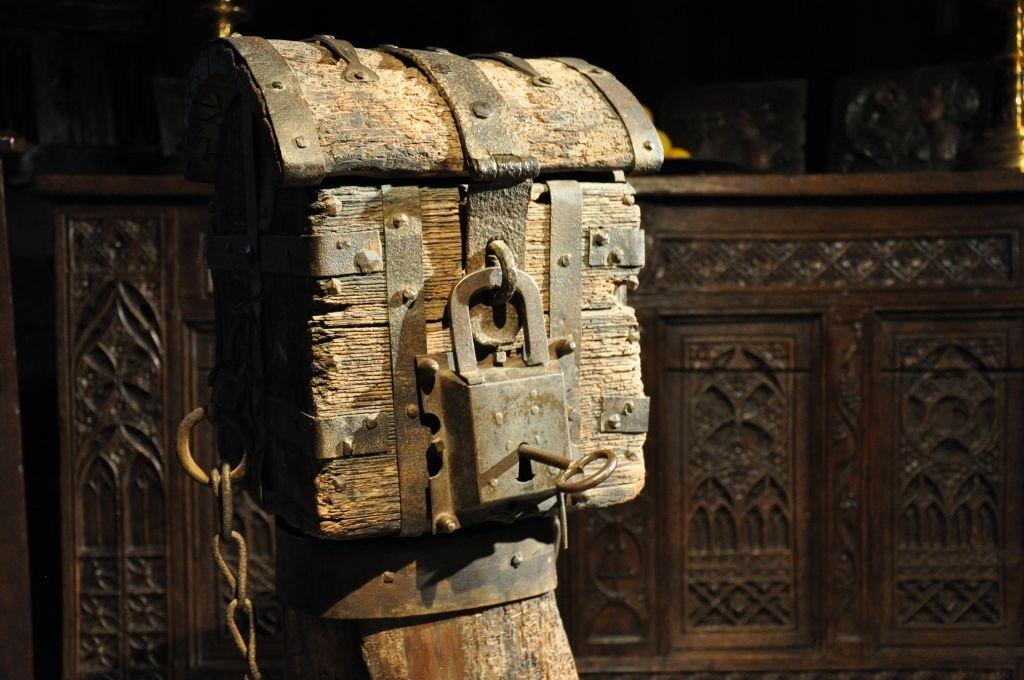 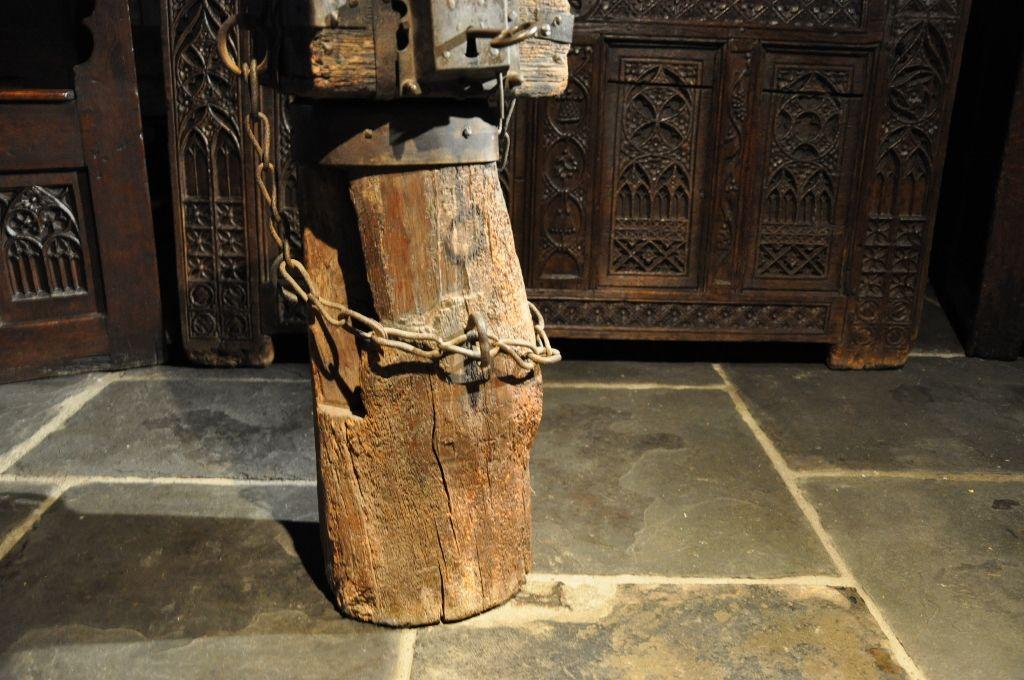 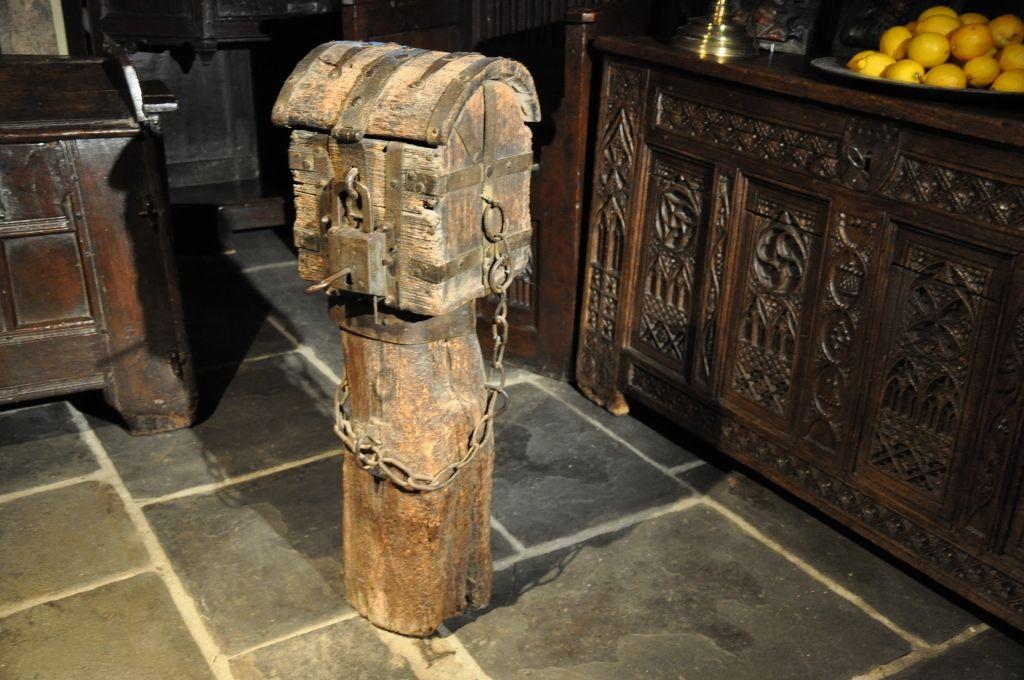 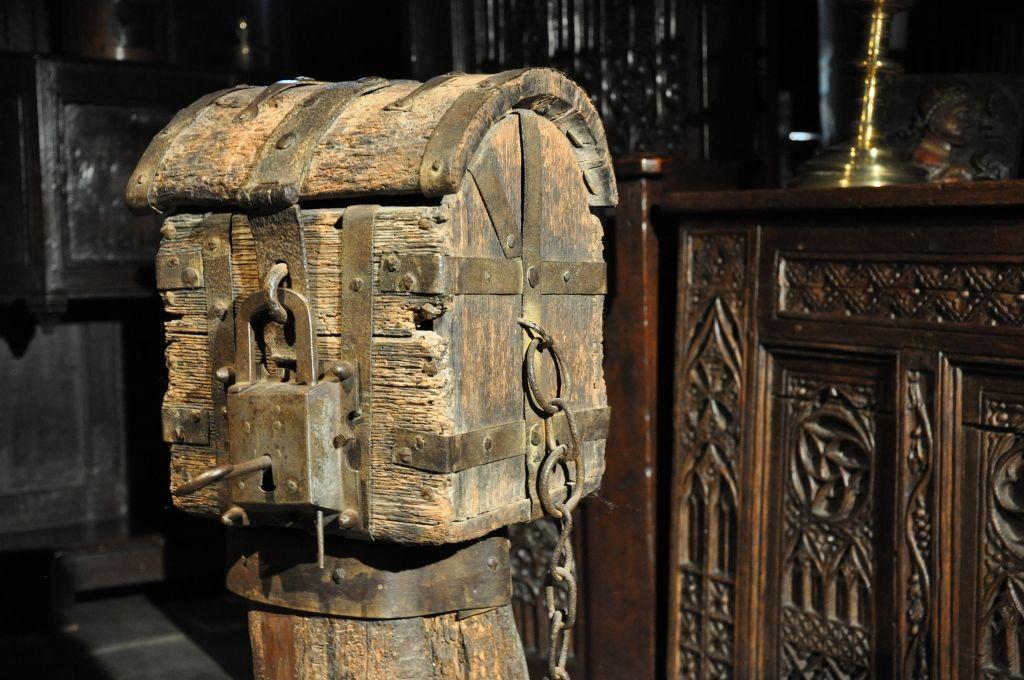 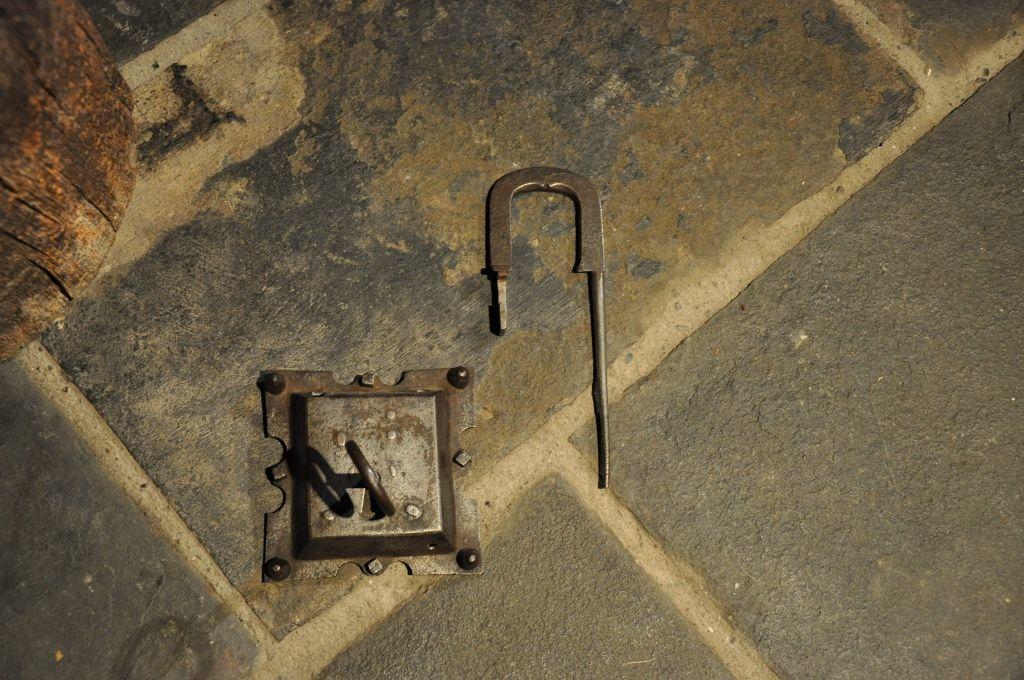 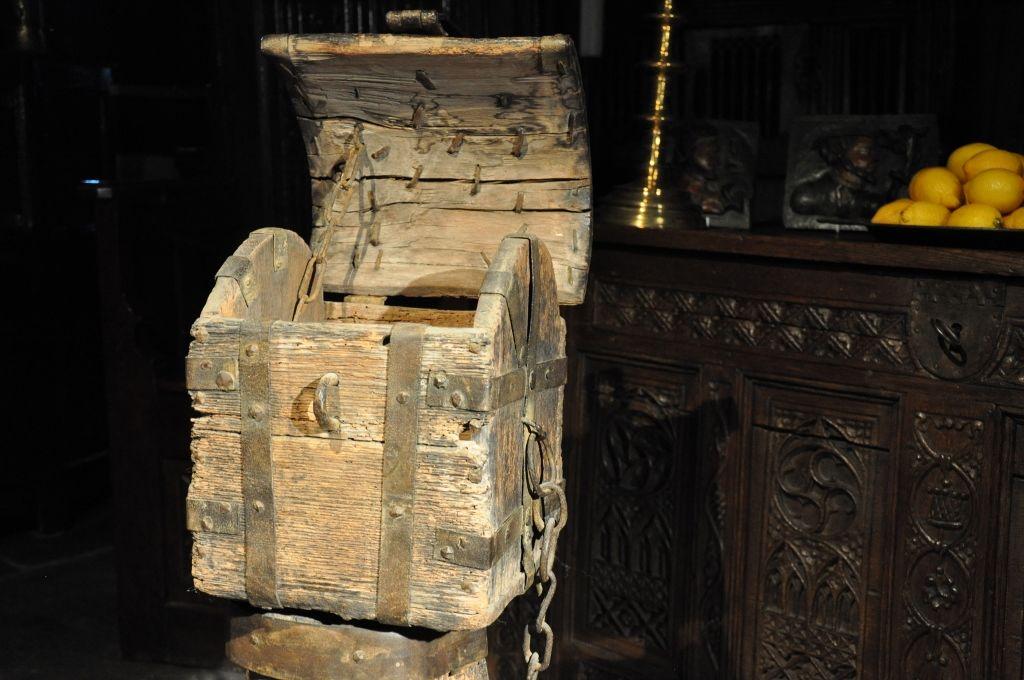 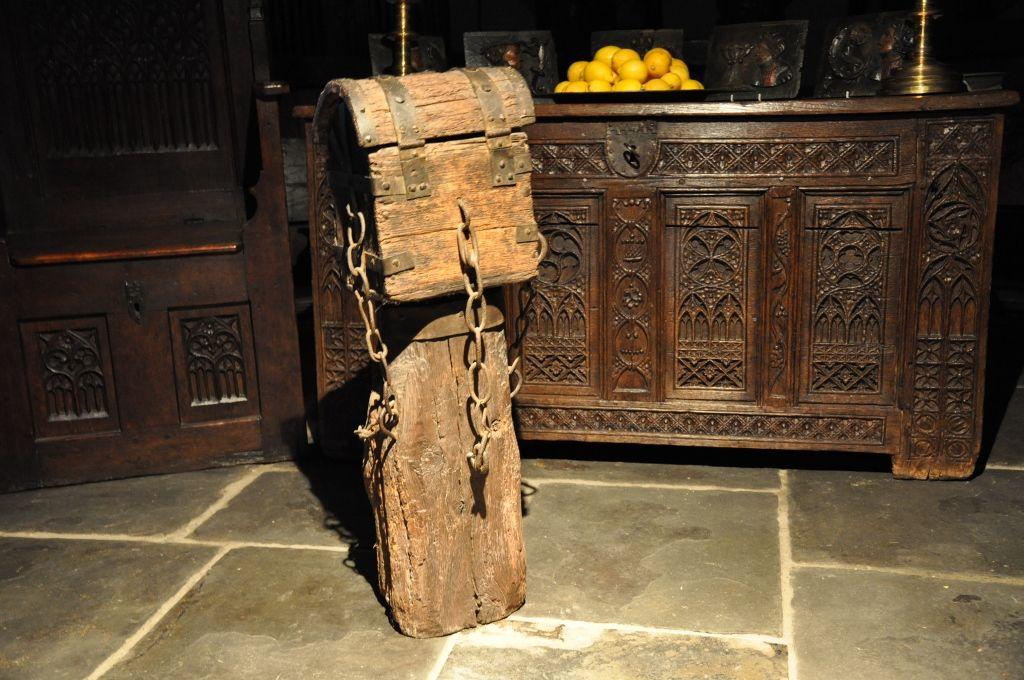 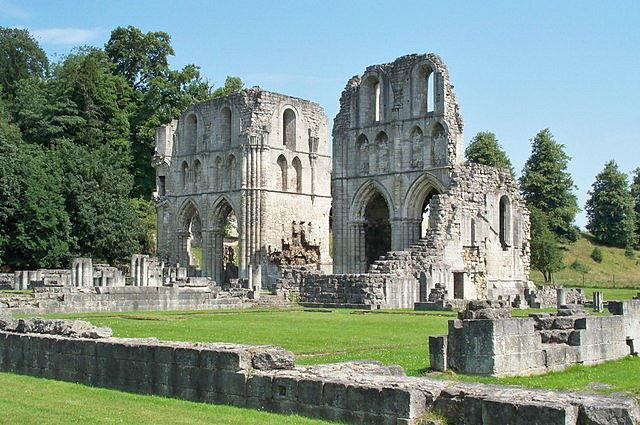 CHAINED TO ITS ORIGINAL STAND. THIS RARE ENGLISH OAK AND IRON BOUND ALMS BOX HAS ITS ORIGINAL IRON MOUNTS AND STAND, LOCK AND KEY.

POVENANCE: ROCHE ABBEY, SOUTH YORKSHIRE AND THEN BY DESCENT THROUGH THE FAMILY TO WHOM THE ABBEY LANDS WERE GRANTED AND THEN IN THE COLLECTION OF MR AND MRS STUART MOSS, NYTIMBER MANOR SOLD SOTHEBYS NYTIMBER MANOR SALE 27 SEPTEMBER 2001, LOT 1138 AND THEN FROM A PRIVATE SUSSEX COLLECTION.

ROCHE ABBEY-
The Abbey of St Mary of Roche was a Cistercian House founded in 1147 by Richard de Bully, Lord of Tickhill and Richard, son of Turgis. It became a place of pilgrimage because one of the rocks at Roche bore a resemblance to the Cross. It was a centre of learning and charity. In time many wealthy and not so wealthy people left gifts, often of land, to the Abbot in return for prayers for their souls. In a time when hardly anybody but the clergy was literate or numerate, Roche Abbey and its monks and Abbot exerted a great deal of influence through the surrounding area. They were builders of bridges and roads, drainers of swamps and keen on improving their lands and properties. There are many charters detailing the landed property of the Abbey but no chronicle of the house survives.

At the Dissolution of the Monasteries in 1538 the house was valued at £224 2s. 5d. and was surrendered to the Crown. I presume that, as in may similar cases, the Crown purloined anything of value and the rest of the fixtures, fittings, books etc. were auctioned off. As for the abbey, there was wholesale plunder by everybody in the neighbourhood. Much of the stone was carted away and used to rebuilt part of St Bartholomew′s Church and erect new cottages and houses in nearby Maltby.

The Crown granted the site and buildings to Thomas Vavasour and William Ramsden in 1554. The site and buildings subsequently passed, together with the manor of Sandbeck, to Robert Saunderson whose son became Viscount Castleton in the peerage of Ireland. The 6th Viscount and 1st Earl died without issue in 1723. His estates passed to a cousin, Thomas Lumley, who became 3rd Earl of Scarbrough. The ruins of the abbey formed part of the landscaped estate gardens of Sandbeck Park until 1921 when they passed into the guardianship of the Department of the Environment. The site is now administered by English Heritage.