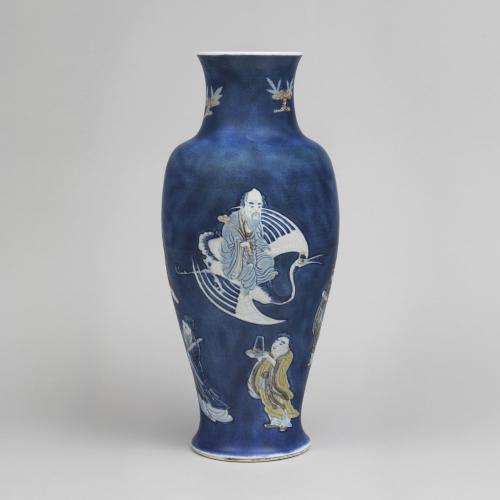 Marchant are delighted to announce the exhibition and sale of Qing Porcelain from Three Private Collections coinciding with Asian Art Week in London 2019.

The exhibition comprises pieces from three esteemed collectors of Qing ceramics from the late 1800’s until today. Each collector is quite different but all have had the same passion for collecting, providing interesting provenance for each piece.

Tang Shaoyi was the first Prime Minister of the Republic of China in 1912. He later held other official positions in government until 1937 when he retired. Tang Shaoyi was a well-known collector of imperial Chinese porcelain of his time, however he was assassinated at his home in 1938 by a Juntong squad impersonating antique sellers.

Frenchman Henry Mazot arrived in Peking (now known as Beijing) in the early 1920’s and worked for the Bank of Indochina, where he became Chairman spanning a 25 year career. It was during this time he built his collection, examples of the kind of wares that were available to wealthy individuals residing in Peking. It was moved to the family château in France when they returned in 1946.

Some larger pieces were on display at the home, but the majority of porcelain was left in tea-trunks in the basement until 2015 when the granddaughter of Mazot decided it was time to open these up. All the Mazot pieces included in the exhibition are fine examples that have been rediscovered after almost eighty years.

Jeffrey Stamen is an avid collector of Chinese porcelain and is extremely well respected for his knowledge and study on Kangxi throughout the world. He has been a great friend of Marchant over the years.

The cover of the exhibition book displays three prominent pieces, one from each collection. The imperial Kangxi yellow bowl with green dragons (no. 8), is from the collection of Henry Mazot. The impressive Kangxi powder blue ground baluster vase (no. 6), carved with the Eight Immortals and Shoulao is from the Jeffrey Stamen Collection, and the imperial Yongzheng bright copper-red bowl (no. 12) is from Tang Shaoyi.

Top Right:
Chinese porcelain baluster vase carved on the body and applied with the eight immortals in blue and white, celadon and copperred