An Introduction to Chinese Kangxi Blue and White Porcelain 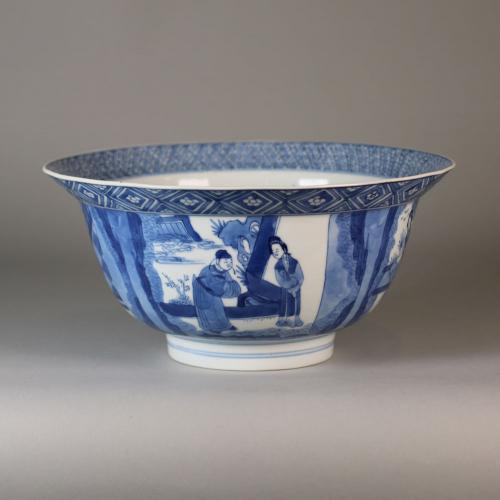 Kangxi blue and white porcelain was produced in China during the reign of the Emperor Kangxi. The fourth Emperor of the Qing dynasty and the longest-reigning emperor in Chinese history, he ruled China from 1662 to 1722.

Due to huge demand from Europe and the home market, even very poor quality products were popular during this period. A large number of kilns in Jingdezhen, the largest centre of production of Chinese porcelain, produced hundreds of thousands of pieces of blue and white porcelain throughout the period, which can sometimes lead to Kangxi porcelain having a reputation for variable quality. 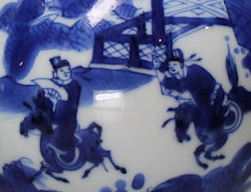 Designs were sometimes based on Buddhist and Daoist themes but were more often sourced from illustrated books including Ming stories such as The Three Kingdoms and The Romance of the West Chamber or popular dramas such as Xixiang Ji and Wui Hu Zhuan.

Kangxi blue and white porcelain was increasingly varied and innovative in terms of structural design, and Dutch and other European shapes were also used, inspired by important makers of Dutch Delft from the 17th century such as Lambert van Eenhoorn or Adrian Kocks.

The Difference between Imperial and Domestic designs

In decorating Chinese Kangxi blue and white porcelain for the domestic market and export, artists often did not know how to complete the decoration of figurative scenes, and therefore usually ended them in rockwork and clouds or plantains. In the case of Imperial wares the artists usually found a more pleasing solution. 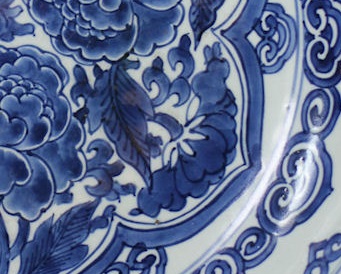 Differentiating between Kangxi blue and white porcelain made for Imperial use and that made for the public can be difficult, but there are some hints that can be useful.

Imperial porcelain is of the highest quality and is nearly always finely marked.

The potting is perfect and there are few, if any, iron spots or other imperfections in the glaze.

Some connoisseurs believe that as there were very few calligraphers drawing the marks, it might even be possible to identify the writing of the individual calligraphers.

Some collectors seem to find it difficult to differentiate between the two, but there are one or two tips.

In Transitional wares, the grass in outdoor scenes on is always depicted with V shapes.

Transitional blue and white often had incised ‘an-hua’ borders and some shapes were specific to each of the periods.

Chinese Kangxi blue and white porcelain was seriously under-valued in the past. With interest from mainland China increasing, it is becoming more expensive but still undervalued.

What to look out for

The amateur collector has to be very wary of fake Chinese Kangxi blue and white porcelain. Examples appear in large numbers and are sometimes even seen for sale at established auction houses. Today’s forgers are very in touch. They know how to write the reign marks correctly and are very skilled at transferring the designs of genuine pieces onto new ones.

News also travel faster nowadays, and if the forgers hear that they are doing something wrong they soon learn to put it right. For example, recently Wanli-type large Kraak jars were being auctioned as genuine but expert dealers pointed out that these jars should be made in two pieces and normally horizontally luted together in the middle. Soon new fake Wanli jars appeared made in the right way.

We will not go into the many ways that fakes can be spotted – this would revel our secrets to those who want to make money from forgery!

Collecting Chinese Kangxi blue and white porcelain can be very rewarding, as long as collectors are careful and seek expert advice before making a purchase.

View the full collection of inventory available from Guest & Gray