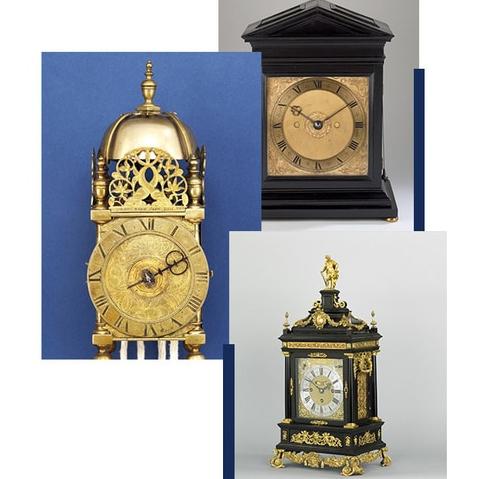 BADA member Nigel Raffety of Raffety Ltd is one of two private clock collectors that have collaborated to stage an outstanding exhibition of early English clocks at Bonhams London premises until September 14.

The exhibition also features third party loans, including contributions from the Science Museum, the Clockmakers Company and the Collection of the 5th Lord Harris from Belmont House, amongst others.

Given that the majority of clocks are privately owned, the specimens on display are very rarely in the public eye.  Indeed, what makes the exhibition particularly exciting is that many of the clocks are being displayed together, almost certainly for the first time.

Many of the clocks on display were either commissioned by Royalty or very wealthy customers and they were, accordingly, high status items on which great care and attention was lavished.

This not only applies to the carefully engineered movements but also to the dials and, in particular, the cases. The show’s curator, Richard Garnier explains, “In researching the exhibition - that displays the early development of the pendulum clock - I’ve discovered that, in England, clock case design and materials pre-dated cabinetmaking of the period.

Clocks were the pinnacle of English fashion and featured expensive woods such as ebony and kingwood, leading the way in cabinet making.  It seems that the common wisdom – that clock cases followed developments in the furniture trade – is wrong.

It was in fact furniture that seems to have been influenced by clocks, as these new mechanical timepieces were the ultimate in designer technology and became leaders in the development of cabinetmaking.”

The exhibition - which also includes watches and historical documents - explores five main themes that analyse the story of clockmaking.  #

These range from initial efforts which developed imprecise timekeepers through to the highly accurate clocks of great mechanical complexity that were developed after the “discovery” of the pendulum.

Other themes explored include the importance of crown patronage and the growing market for luxury goods which emerged after the Restoration.

This innovation took place during a period of tumultuous change and political instability.  Yet, each head of state (James I, Charles I, Protector Oliver Cromwell, then Charles II and James II, plus the later Stuart monarchs, William of Orange, Mary II and Queen Anne) expressed their elite status through patronage of the arts and sciences.

This in turn, informed the culture of innovation which drove clockmakers to create increasingly elaborate and more accurate clocks.