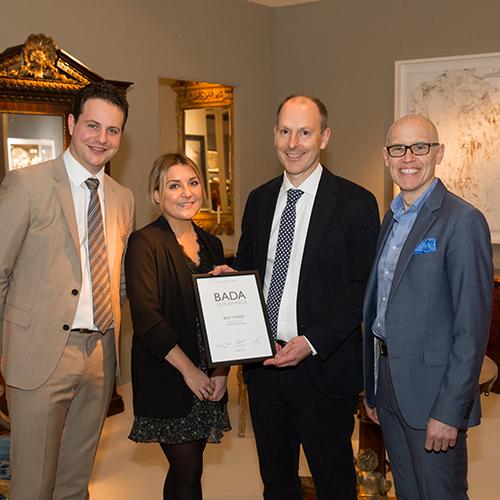 BADA 2018 opens its doors to the public on Wednesday 14 March at Duke of York Square, Chelsea and as the excitement builds, we are delighted to announce the winners of our BADA 2018 Best Stand awards.

There were four award categories available this year with judges asked to assess fair exhibitors for best use of lighting, best showcase display, best individual object and the highly-coveted best stand award. The judges were given a private tour of the fair on Tuesday afternoon before reconvening in the Pantry to make their final decisions.

The best display award was given to second generation porcelain specialist Elisabeth Lorie of Mary Wise & Grosvenor Antiques on Stand B22. A BADA member since 1970, the judges were particularly impressed with Elisabeth’s use of colourful backgrounds and the considered placement of objects in her display cases to expertly showcase the English porcelain, bronzes and decorative objects on offer

Our judges agreed that the best lighting category should go to silver specialists N & I Franklin who can be found on Stand A4. Brothers Neil and Ian Franklin were elected to BADA membership in 1993, becoming some of the youngest people ever to join the association. Our panel felt their use of bold lighting, offset with dark wall coverings, really brought their objects to life.

Competition was particularly strong in the best object category but after lengthy deliberations, the judges decided to present the award to the George II Pietra Dura and Mahogany Cabinet-on-Stand from Thomas Coulborn and Sons on Stand C70. The Pietra Dura panels are attributed to the celebrated Grand Ducal Workshops of Florence, circa 1650, while the cabinet-on-stand is English and dated circa 1755. The piece was acquired by British property magnate Harry John Hyams in the 1960’s from Wiltshire Country House Ramsbury Manor.

Not surprisingly, the Best Stand award was another keenly contested category however the judges agreed by unanimous verdict, to present the award to long term exhibitors Godson & Coles on Stand B38. Specialists in 18th and early 19th century furniture and works of art, our panel loved their thoughtfully curated display of traditional furniture imaginatively juxtaposed with modern and contemporary British pictures.

You can judge for yourself and see if you agree with our panel’s decisions when BADA 2018 opens to the public from 11am on Wednesday 14 March.