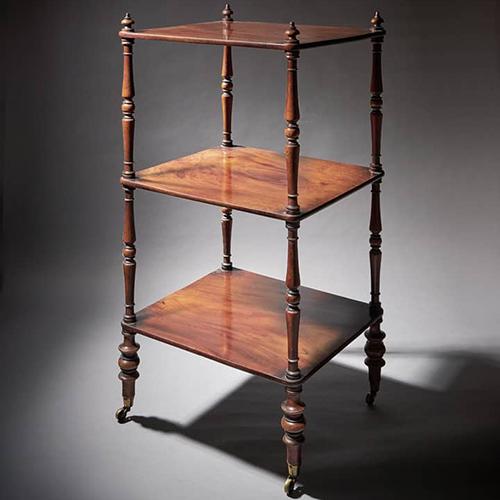 Perhaps the most colloquial and winsome term in the antique lexicon, a whatnot is the name given to a floor-standing piece of open display furniture, comprised of slender uprights which support a series of shelves, based on the French design known as an ‘etagere’.

The term is a derivation of the old English word ‘whatnot’, which dates back to the mid-16th century and, according to the Oxford English Dictionary, can be used to mean ‘anything’, ‘everything’, or ‘all sorts of things.’

Its use in furniture terms dates to the early 19th century, with objects increasingly designed for aesthetic enjoyment rather than functionality. The term whatnot literally refers to the item of furniture’s versatility in that it could be used to store porcelain, silverware, grand tour souvenirs, or literally anything the owner may wish to display.

The open sided design of the whatnot not only offered unobscured views of one’s objet d’arts, but also invited the curious visitor to handle your prized items, thereby offering a more hospitable alternative to cabinets or displaying cases. 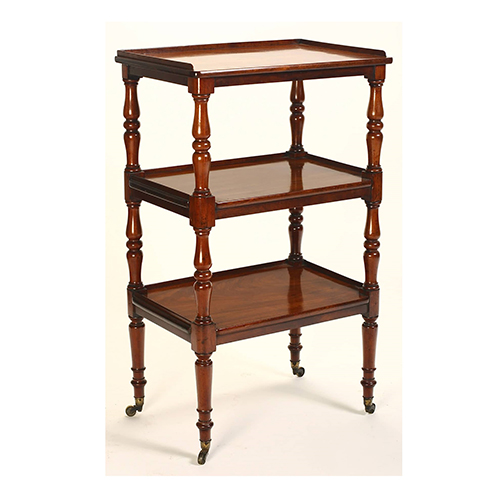 The first instance of the term, used in its furniture context, can be found in a letter from Lady Sarah Spencer to her brother Robert, dated December 1808, in which Lady Sarah mentions that their, “old chairs, tables, what-nots, and sofas were torn up by the roots”, to make way for a new carpet.

Usually rectangular in form, most whatnots consist of three or four shelves, although in some instances the bottom or middle shelf may also include a drawer. Rare examples have a triangular design which allow them to fit neatly into the corners of a room.

British whatnots were most commonly produced in mahogany or rosewood, the most fashionable timbers of the late Georgian and Victorian eras. They tend to be simpler and more functional in design than the French etagere, presumably so that the finery of the furniture did not draw attention from the curios displayed upon it.

Click here to view a selection of whatnots currently available from BADA members.