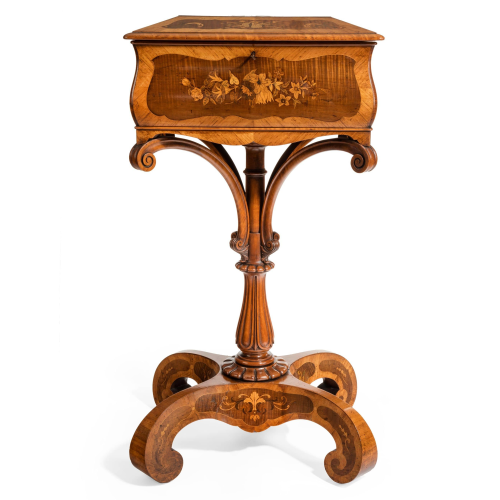 Originally, the term teapoy was used to describe a small flat topped three-legged table and derives from the Hindi word tīn, meaning three, and the Persian word pāi, meaning foot. In the 17th century the term was usually spelt “tepoy” a name which bore no relation to the drink it at all and early examples are often mistaken for candle stands. However, the evolution of the term is intrinsically linked with the British passion for tea.

Tea was first sold as a beverage in England by Thomas Garway at his London coffeehouse in Exchange Alley in 1657. In a few short years every coffeehouse in the capital stocked the fashionable new drink which at anything up to ten times more expensive than coffee was exclusively enjoyed by the most affluent and fashionable members of society.

Its popularity gained a significant boost in 1660 when the British East India Company presented Charles II with two pounds of tea imported from Portugal. Subsequently his wife Catherine of Braganza had the drink served at their wedding in 1662 and made tea the drink of choice among the ladies of court.

No fashionable garden party was complete without a serving of afternoon tea and a teapoy, in its original guise, would be placed alongside the chair of each guest for the servants to place their cups or tea bowls on, along with milk, sugar, lemon and a selection of cakes and pastries. Since they were predominantly used outdoors the earliest teapoys were often simple in design and made from plain woods.

Initially imported from the Dutch, the British East India Company began trading tea directly with China from 1700. This not only stabilised the price of tea but also made it a more accessible commodity, prompting demand to quadruple between 1720 and 1750.

Although more affordable, tea remained a significant expense and lockable tea caddies were popular as a means of securing the contents from covetous servants. Keeping one’s tea under lock and key also allowed the lady of the house to blend her tea in front of her guests, thereby dismissing any suggestion of “smouching”, which was a term given to the practice of unscrupulously adding other dried leaves to stretch your tea leaves further!

With people consuming more and more tea the question of storage became an issue with tea caddies becoming larger and more unwieldy. The solution was found around 1810 when an ingenious cabinet maker came up with the idea of combining the two.

The more familiar Regency style teapoy features a large rectangular caddy, mounted upon a sturdy pillar. The finest examples were produced in fine woods such as mahogany, satinwood and walnut with carved cabriole legs and baluster shaped supports with the use of exotic wood veneers.

Equal care and craftsmanship were applied to the interiors of Regency teapoys which often featured fine hand painted landscapes and still life paintings or were beautifully lined with plush or velvet. This attention to detail made them an eye-catching and essential addition to the most stylish of homes.

See all teapoys from our members here.