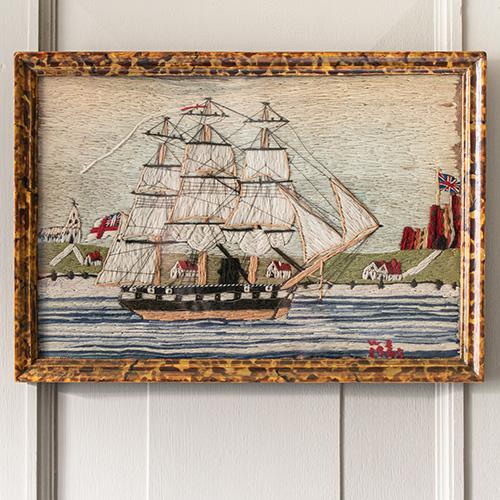 Along with arts and crafts such as wood carving, scrimshaw and ropework, the sailors woolwork is a genre of folk art popular amongst servicemen in the British Navy and Royal Marines from the mid-19th century onwards.

Woolworks, or woolies as they are sometimes known, are hand embroidered pictures, usually worked in coloured wool and on rare occasion supplemented with silk and cotton thread. This was applied to plain-weave cotton or linen cloth, most commonly using cross stitch, chain stitch, long stitch, and short stitch, as needlework was an essential skill for any naval rating of the time.

Woolwork subjects usually fall into one of three categories; vibrant portraits capturing a ship cutting through the ocean at full sail, commemorative pieces marking a historic naval event or milestone, and romantic tokens to a longed for loved one.

The most common of these variants is the ship’s portrait (image 1), with the only surviving visual record of many vessels being an antique sailor’s woolie. Ships are normally depicted broadside and at full sail with all sheets billowing in the wind, and flags resplendent at full mast.

Occasionally, ships are portrayed at anchor or whilst entering, or leaving, port with sails furled. This gives rise to an alternative theory that many woolies were the work of enterprising local artists who made a living at major ports, making souvenirs for sailors. 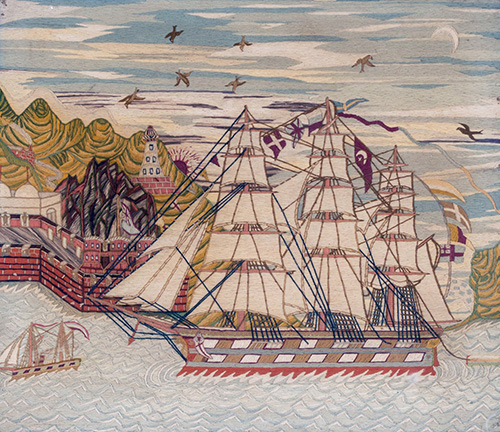 The ship portraits are not limited exclusively to Royal Naval vessels, as woolworks of merchant naval ships or privately owned yachts are also common. As indeed are sailors’ woolies depicting ships of the burgeoning 19th century US Navy.

On occasion, ship portraits are framed within a vignette of maritime flags, heraldic banners, or coats of arms for maritime nations and important naval ports. Some of the rarest examples are bordered with a set of proscenium curtains to heighten the drama of the portrait.

Even when the vessels are named, it can prove difficult to identify the ship in question as names were often repeated in the Royal and merchant navies. Consequently, dates, flags, mast configuration, figureheads and even the number of gunports can be invaluable sources for correct recognition of a vessel.

From a historical perspective, woolworks portraying important events can offer a fascinating record (as in our second image which features a Royal Naval shop entering port during the Crimean War). Popular themes include battle depictions, royal reviews, fleets gathering or leaving port and important maritime innovations, such as the first iron clad hulls, paddle ships and even early submarines.

The final genre is the romantic work (see image 3), most commonly portrayed in the form of the “Sailors Return”, a popular motif for British artists from the 18th century onwards, which can also be found in paintings, prints and ceramics of the time. 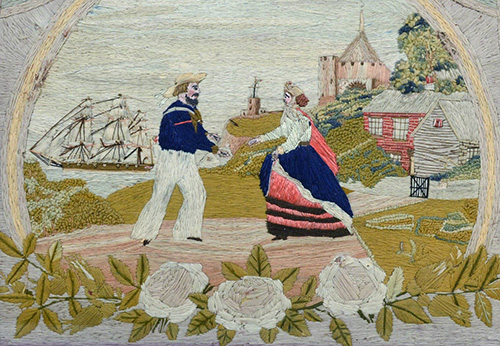 These scenes usually depict a uniformed sailor arriving home, often with kitbag slung over shoulder, to be greeted on the doorstep by a loving wife and, in some instances, children too. It is also common for the sailor’s vessel to be depicted in the distance, resting at anchor in a nearby bay. These images are also often supplemented with naïve depictions of coastal towns, lighthouses, and military forts, as well as native flora and fauna.

Although the heyday of the sailors woolwork is considered to be the period 1860-1880, they remained a popular creative pastime among sailors as recently as the First World War. Ultimately, the switch from sail to steam, coupled with the increasing affordability of photography signalled the end for a now forgotten folk art.

What works remain present a charming, if somewhat naïve, glimpse of a lost art form and a majestic era when sail dominated the high seas.