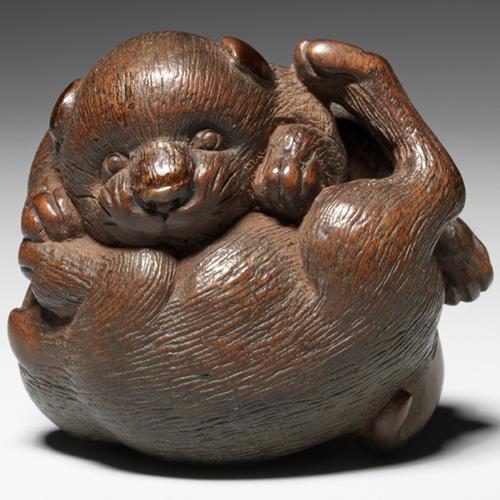 Netsuke is both the singular and collective term given to the intricate miniature sculptures and wood carvings that became hugely popular in Japan, and later in Europe and North America, from the 17th century onwards.

A clue to the origins of these beautiful sculptures is contained in the etymology of the word netsuke, which is formed the characters ne 根, meaning root, and tsuke 付, which means attached. Put simply, netsuke originated as a simple device for securing belongings to the belt.

Traditional Japanese clothing such as the kosode, and its simplified successor, the kimono, while stylish and elegant, lacked practicality when it came to carrying items such as money, pipes, tobacco, writing brushes, seals, or ink. Small items could be secreted in the sleeves of a woman’s kimono but there was no convenient alternative in men’s fashion.

The Edo Period (1603-1867) solution came in the form of sagemono, which literally translates as ‘hanging thing’. The term describes a genre of pouches, boxes or baskets designed to be suspended from a kimono sash (or obi) thereby creating a suspended pocket. 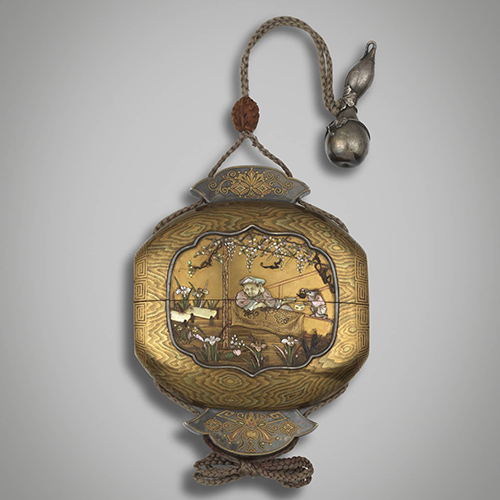 The most popular form of sagemono, among wealthy merchants of the Chonin and Samurai classes, was the inro (image 2). These are beautiful boxes, usually decorated with fine lacquer designs and often inlaid with ivory, gilt metal, shell, or mother of pearl.

The inro was secured to the kimono via a cord, which was tucked through the obi and secured in place by a netsuke which dangled over the top of the belt, acting as a counterweight. A decorative bead, known as an ojime, slid along the cord between the inro and the netsuke to allow the wearer to fasten or unfasten the inro case.

While the earliest examples would have been little more than a practical carved button, netsuke quickly evolved, as skilled craftsman saw an opportunity to demonstrate their talents. Netsuke became works of art in their own right, adding another dimension of self-expression to a gentleman’s accoutrements.

When coupled with an elaborate inro, a fine netsuke was a visible representation of the bearer’s wealth and power. Wealthy Japanese men would amass large collections of netsuke, matching different sculptures with different ensembles to further demonstrate their commercial success and standing in society. 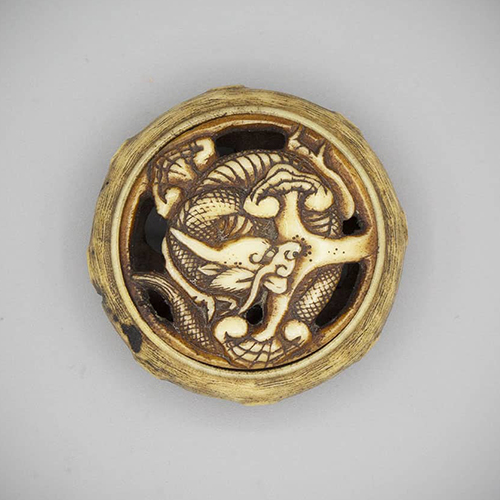 The most common materials for carving netsuke were ivory and wood, with boxwood preferred by many craftsmen, due to its fine grain and durability. That said, examples carved in other native Japanese woods such as cherry, yew, cypress, camphor, and black persimmon are not uncommon.

There are many different forms of netsuke, the most common of which are the katabori netsuke (image 1) or figural sculptures. These figures normally stand between one and three inches high, with popular themes including zodiac animals, deities, warriors, figures from myth and folklore, and even erotica.

Other popular styles include manju netsuke (image 3), which is a style of flat, round netsuke, usually carved in relief and designed to resemble the shape of a manju bun, a traditional Japanese confection filled with sweetened adzuki bean paste.

Mennetsuke or mask netsuke (image 4) are another common design. These are netsuke carved to resemble traditional characters familiar from Noh theatre, a form of classical masked dance-drama which became popular in Japan from the 14th century onwards.

Although some netsuke are signed by the craftsman that produced them, many are not, including some of the finest examples ever made. Ironically, a signature is no guarantee of origin since lesser makers have been known to copy the signatures of more gifted makers. Less gifted apprentices may also have attributed their work to the master craftsman under which they laboured. 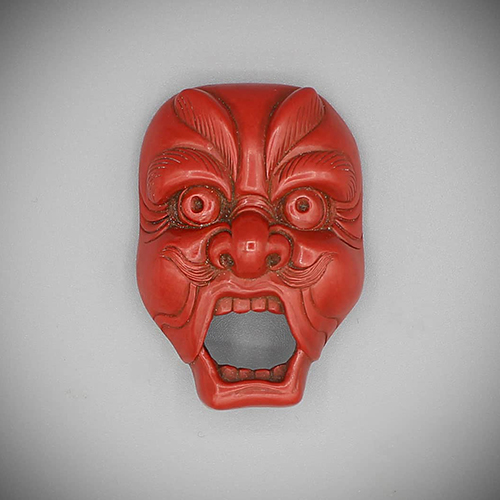 The Meiji era (1868-1912) oversaw the country’s transition from an isolated feudal society to an emerging industrialized nation state. Consequently, the demand for netsuke declined in Japan as more westernized clothing increased in popularity.

Ironically, demand among Western collectors escalated at a pace with many of the finest and most elaborate netsuke sculptures dating from this period. Indeed, it is thought that many of the foremost collections of netsuke remain outside Japan and were produced purely to meet the demands of the export market.

With many Europeans and Americans taking up residence in Japan throughout this period, netsuke, with their exquisite carvings and convenient size, became a popular souvenir of exotic travels. In much the same way that young European men had collected items on the Grand Tour a century before.

As a result, excellent collections can be found on display at the British Museum and the V & A in London, and the Los Angeles County Museum of Art. Smaller collections, but equally fine examples, can be seen in the Louvre Paris, the Hermitage St Petersburg and the Metropolitan Museum in New York.