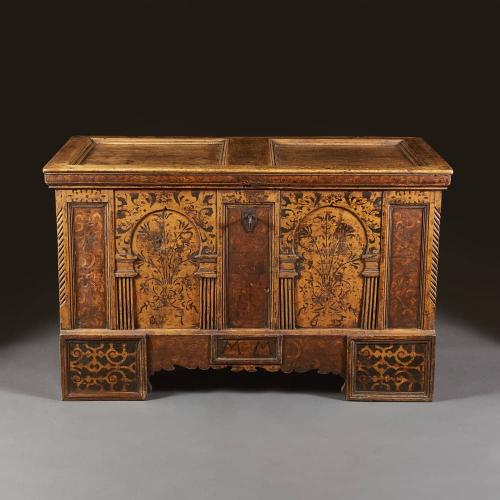 Marriage chests, also known as cassoni, hope chests or wedding chests, were historically used to store the linens and dowries of women before they were married.

Cassoni were traditionally made in pairs for the bride and groom, usually decorated with the families’ coats of arms. The chests contained clothes, linen and other dowry items, and were taken to the new bride’s home following the marriage. In the 15th century, when marriage alliances in places like Florence were extremely valuable and important, cassoni would be extremely decorative and artistic. Artists like Botticelli, Uccello and Donatello were employed to decorate cassoni for wealthy families. Battle scenes and literary themes were especially popular at this time.

16th century cassoni were usually carved with mythological and grotesque figures, and could be enriched with intarsia (mosaics of wood).

Hope chests are the lasting tradition from marriage chests and are sometimes filled by girls from a young age in anticipation of a future marriage.

More traditional chests were constructed with cedar, which naturally repels insects and makes them suitable for carrying linens and clothing. Although not used as much in today’s society, marriage chests are well suited for a variety of occasions, from weddings to handing down items to other family members. Cedar wood remains suitable for linen storage. Marriage chests suit a variety of interiors and are well suited to bedrooms especially.

To see all marriage chests available on bada.org, click here.