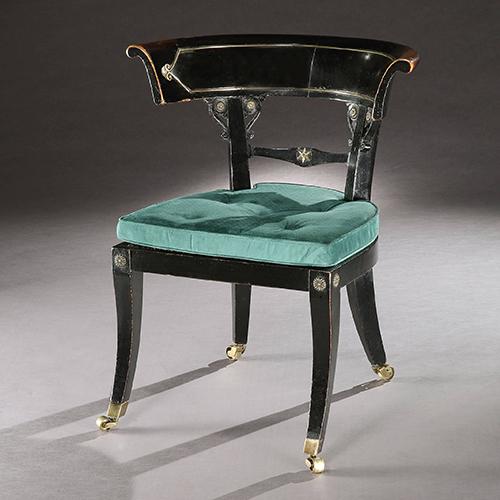 A klismos or klismos chair is a style of lightweight, simple, yet elegant seating furniture that originated in Ancient Greece and found popularity once more during the Neoclassical era in Western Europe.

Although no Ancient examples survive, klismos chairs can be seen in Greek painted pottery and ceramics from as early as the 5th century BC onwards. Such as this amphora from the Attic Peninsula, circa 460 BC, from the British Museum Collection.

Similar depictions are also carved into surviving architectural bas-reliefs, including those of the theatre of Dionysus at the Acropolis in Athens, and this marble tombstone of Xanthippos, also from the British Museum Collection. Klismos are even mentioned in Homer’s epic poem The Iliad, although the term is used in the context of a chair and no description of its form is given.

In classical depictions, the klismos chair is most notable for its four tapering legs which sweep forward at the front and backwards in the rear and were often carved from a single piece of wood. This curved, tapering style is sometimes referred to as a sabre leg. 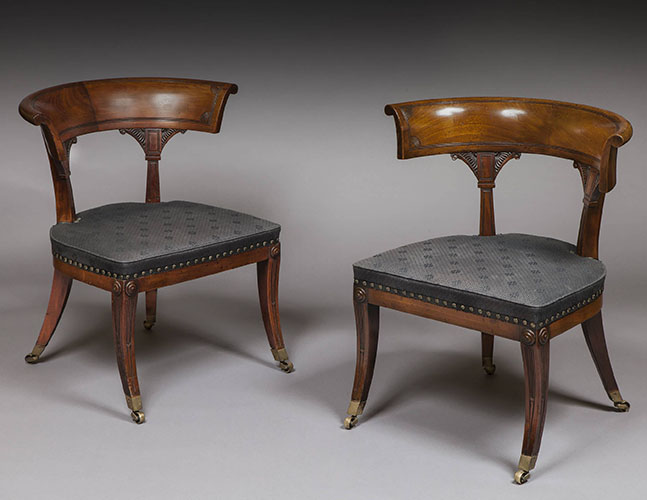 The gently curving backrest is usually situated at sufficient height to support the shoulders, although in some examples, the rest may be low enough to lean an elbow on. The chair was then completed with a seat of textile or animal skin.

Yet, despite their obvious comfort and aesthetic appeal, the Klismos chair fell out of favour during the Hellenistic period, which marked the fall of Ancient Greece and the rise of the Roman Empire. No doubt a reflection on Rome’s unrivalled influence throughout Europe and the Middle East at the time.

The revival of the Klismos began in France in the 1780s, inspired by the chair’s appearance in grand neoclassical paintings of the period. The earliest physical examples were designed by architect Jean-Jacques Leque in 1786, for the Etruscan themed furnishings at the Hotel Montholon in Paris.

Soon after, the style was introduced to London by the Anglo-Dutch designer and interior decorator Thomas Hope (1769-1831). Hope completed an eight-year Grand Tour, developing a passion for classical architecture and artifacts, before fleeing his native Netherlands, following the French occupation in 1794. 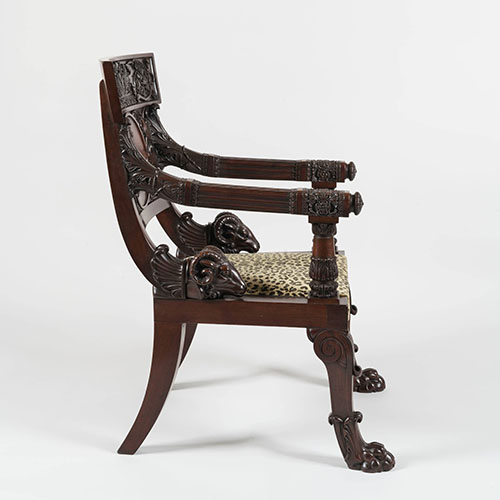 Having acquired a Robert Adam designed residence in Duchess Street, London, Hope set about remodelling the interior in an Egyptian style. Drawing heavily on his travels, Thomas decorated each room in a classical theme based on the countries he had visited on his Grand Tour.

Hope’s role in the revival of Klismos was further enhanced in 1807, when he published a folio volume of his furniture designs entitled ‘Household Furniture and Interior Decoration’. The work was highly influential in fashionable London society and became the catalyst for a new era in English interior design.

Designs of the era often embellished the simple lines of the classic Klismos adding ornate carving, painted decoration and upholstered seats and backrests. The Georgian Era also saw the klismos design adapted to other seating styles such as settees and benches.

One unusual twist on the classic klismos is this example from the V & A collection, London, which features a single central support in place of the traditional twin back supports. It is thought to have been commissioned by the English industrialist Matthew Boulton for his home at Soho House, in Handsworth, Birmingham.

The fashion quickly spread to North America, where First Lady Dolley Madison (wife of fourth U.S. President James Madison), had a set of Klismos chairs made for the White House by ‘Architect of the Capital’, Benjamin Henry Latrobe in 1809. 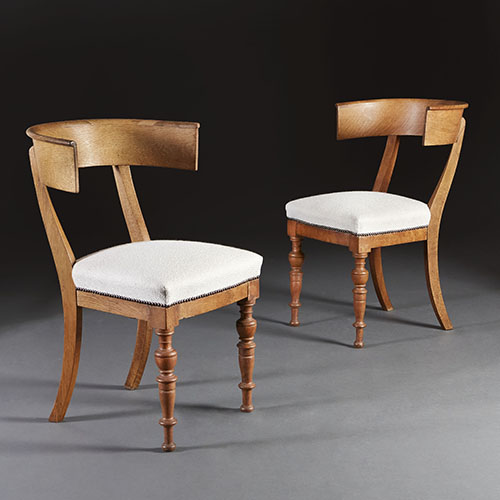 Sadly, these were destroyed during the infamous burning of Washington by the British in August 1814. However, a similar Klismos chair, designed by Latrobe for the drawing room of the Philadelphia merchant William Waln in 1808, can be seen in the public collection at the Metropolitan Museum in New York.

The fluid aesthetic and delightful simplicity of the Klismos struck a chord with designers of the Art Deco period, sparking a revival of the style in the early 1920s. Contemporary interpretations of the Klismos remain popular in modern interiors, giving testament to the enduring appeal of this iconic design masterpiece.

View a selection of Klismos currently available from BADA members