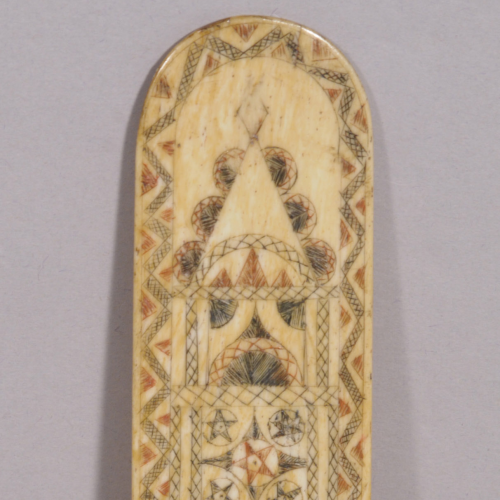 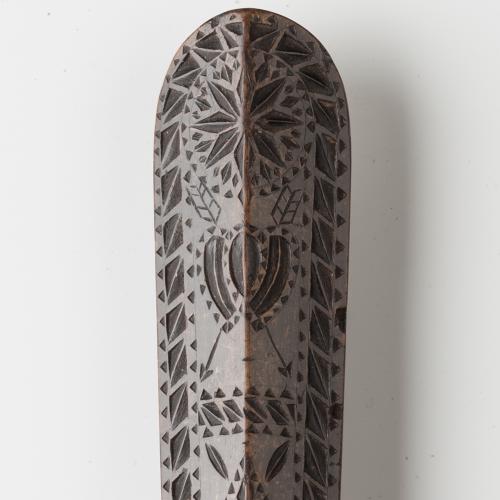 Single piece busks were used in garments called ‘stays’ and bodices from the 16th to early 19th centuries, and were designed to keep the front of the corset or bodice rigid, straight and upright. They were usually made of wood, ivory or bone (see some examples of these types of busks in BADA members’ stock here). To be worn, they were slipped into a pocket and tied in place with a lace called a ‘busk point’.

Busks were often beautifully carved and decorated, or even inscribed with long messages, and were popular gifts from men to women during courtship. As a romantic or even suggestive gift, women even gave suitors their busk points, which were seen as very intimate.

In the middle of the 19th century, a new form of busk emerged. It was made of two long pieces of steel, one with loops and the other with posts, working kind of like a hook and eye fastening. This made corsets much easier to put on and take off, as the laces did not have to be loosened as much when the corset had to go over the wearer’s head and shoulders.

The second half of the 19th century also saw the invention of the spoon busk. The spoon busk was specialised, and as its name implies, shaped like a spoon! The bottom part of the busk widened and took on a dish form. It allowed for greater reduction in waist size without producing a bulge of flesh at the bottom edge of the corset. The wide, dished part of a spoon busk accommodated the abdomen, whilst simultaneously compressing and controlling it, producing a much more flattering silhouette.