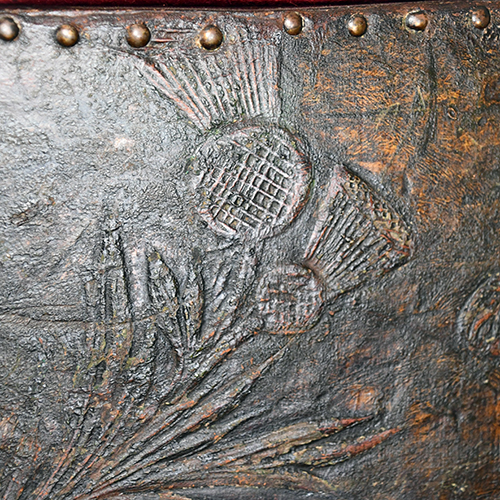 A rare example of a Rapier Chest, covered in leather which has been decorated with royal insignia. What make this an important piece, is that the ends show the Coat of Arms of James the Second (in Exile) under the Stuart crown. There are significant traces of gilding and polychrome evident throughout.

Click here to discover more in this film made especially for BADA Week.

Whilst there is debate between historians in respect of the merits of the rule of James, the indisputable fact is that the political classes had him removed and invited William of Orange to assume the English Throne, and in 1688 he was deposed and fled to France.  He returned to the UK in March 1689 but following defeat at the Battle of the Boyne in 1690 he returned to France where he lived in exile at Saint-Germaine-en-Laye until his death in 1701.

It is highly probable therefore that this Rapier Chest was made during James' time at Saint-Germain-en-Laye, which could offer a date attribution of circa 1690 to 1700, which really does convey historical significance to this wonderful surviving piece of history.