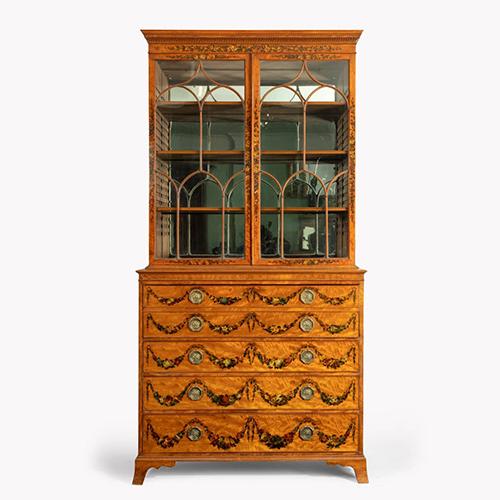 Together with his contemporaries, Thomas Chippendale and George Hepplewhite, Thomas Sheraton was the third pillar in a triumvirate of designers that elevated British furniture to global renown. Their designs not only defined the style and fashion of the late Georgian era but continue to influence contemporary makers and designers more than 200 years later.

Sheraton was born in the market town of Stockton-on-Tees, County Durham in 1751. His father, also named Thomas Sheraton, was a schoolmaster, and presumably played a role in his son’s teaching since Thomas junior, by his own admission, “never had the advantage of a collegiate or academical education”. It is believed that he was apprenticed to a local cabinetmaker from an early age where he developed a talent for drawing and geometry.

At the age of 28, Sheraton married Margaret Mitchinson and the pair had two children, while Thomas earned a meagre living as an itinerant cabinetmaker. Ironically little is known of his work in the furniture trade at the time and he was more notable for his role as a leader of the Stockton Baptist Church, publishing his first treatise, “A Scriptural Illustration of the Doctrine of Regeneration”, in 1782.

In the hopes of making a better life for his family, Sheraton moved to London in 1790, taking rooms initially in Hart Street, before later relocating to Davies Street, Mayfair and Wardour Street, Soho. His business card from the time, seen here in the British Museum Collection, lists Sheraton’s varied pursuits as, “Teaches Perspective, Architecture and Ornaments, makes Designs for Cabinetmakers, and sells all kinds of Drawing Books etc.”

Sheraton’s reputation was secured with the publication in 1791 of ‘The Cabinet Maker’s and Upholsterer’s Drawing Book’, of which example pages can be seen in The Met Museum Collection and the Royal Academy collection. Released in 42 biweekly instalments, and featuring 69 furniture designs, the publication was mostly purchased by furniture makers and instantly transformed the fashion in home furnishings. 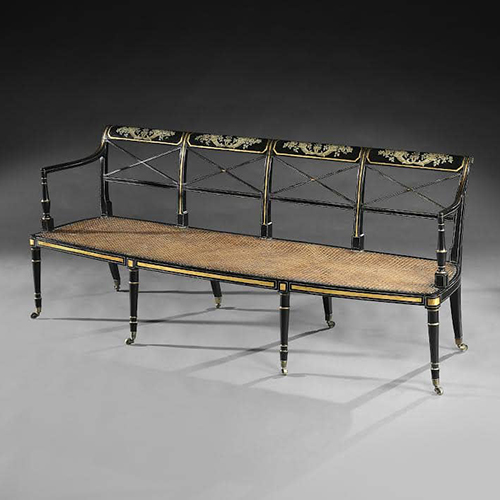 The influence of Sheraton’s publications is as much due to the timing of their release, as it is to the simplicity and elegance of his designs. Thomas’s Drawing Book was released 12 years after the death of Thomas Chippendale and five after the passing of Hepplewhite, both of whose designs had started to feel a little stale. Indeed, Sheraton fires a broadside at Chippendale in the book, describing his work as, "now wholly antiquated and laid aside, though possessed of great merit according to the times in which they were executed."

Nonetheless, Sheraton borrowed significantly from the designs of his illustrious predecessors, working in the neo-classical style made popular by Robert Adam, Chippendale, and Hepplewhite. However, Sheraton’s designs offer a lighter, more refined aesthetic than the work of his forerunners, leaning more towards the Louis XVI style for inspiration.

He dismissed the sweeping curves that were Chippendale’s trademark, preferring simple rectilinear forms, paring down the use of carving and decoration in favour of subtle geometric patterns. Similarly, many of Sheraton’s pieces were designed to be executed in satinwood, a lighter alternative to the predominance of mahogany in furniture designs of the period. Many collectors and enthusiasts believe his exemplary use of inlay, featuring beautifully grained woods such as rosewood and tulipwood, have never been surpassed. 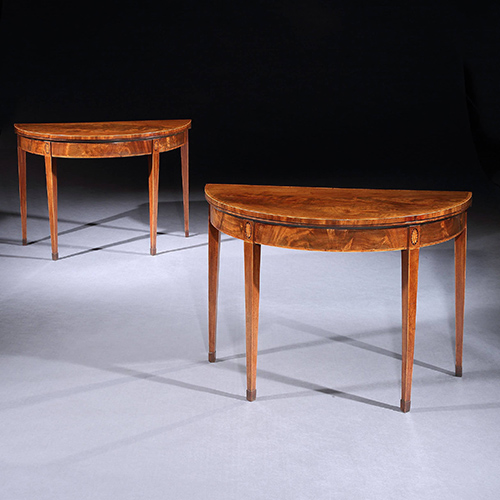 The Drawing Book proved so popular that a second edition was published in 1794 to which Sheraton added a 14 plate ‘Accompaniment’ of additional designs. Copies soon found their way to Europe and North America but despite the success of the publications, Sheraton made a very modest profit on the sale, chiefly because he neither made nor sold any of the pieces featured. In fact, just nine years after the Drawing Book’s publication, Thomas was back living in Stockton-on-Tees as a Baptist Minister.

A resourceful and resilient character, Sheraton was not deterred for long and returned to London in 1802, taking rooms in Broad Street, Golden Square. He published a third revised edition of his Drawing Book that year, now totalling 122 plates and later that year began publishing his Cabinet Directory, a glossary of terms used in the cabinetmaking trade. The Directory also includes a list of more than 200 makers and upholsterers working in and around London at the time; a priceless historical insight. The accompanying designs offer a glimpse of the early Regency style that would prove so popular in a few short years, together with a tendency to the bizarre, hinting at the mental health issues that would dominate Sheraton’s final years.

His final furniture related work was the publication of the ‘Cabinet-Maker, Upholsterer and General Artist’s Encyclopaedia’ in 1804. Intended for publish in 125 alphabetical parts, only 30 parts were published due to Thomas’s declining health, covering the letter A, through to Capstan. 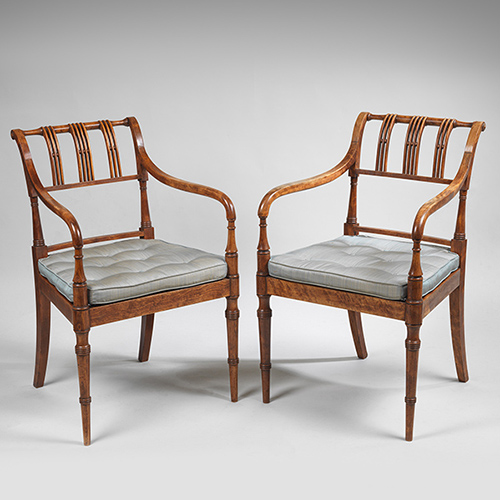 An insight into Thomas’s circumstances at the time were provided by the publisher Adam Black in his Memoirs, who writes that Sheraton, "lived in a poor street in London, his house half shop, half dwelling-house, and himself looked like a worn-out Methodist minister, with threadbare black coat.” Black goes on to offer his appraisal for Sheraton’s poor fortunes, adding, “I believe his abilities and resources are his ruin in this respect -- by attempting to do everything he does nothing."

Just two years later, Sheraton died of phrenitis, an inflammation of the brain causing fever and delirium, now more commonly recognised as meningitis or encephalitis, on October 22, 1806, aged only 55. According to his obituary in the Gentleman’s Magazine, “He has left his family, it is feared, in distressed circumstances”. Hard to imagine that one of the most celebrated designers of the Golden Age of British furniture lived and died in such inauspicious circumstances with little idea of the high regard in which his work would be held by future generations.

200 years after his birth, Thomas Sheraton was honoured with a blue plaque marking his achievements by Westminster City Council. It stands above his former premises at 163 Wardour Street, Soho.  Readers in the North-East of England can also raise a toast to Thomas Sheraton in the pub named after him in his hometown of Stockton-on-Tees.