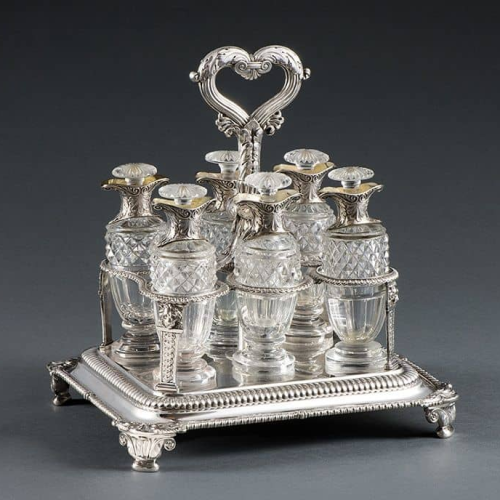 One of the finest silversmiths of the Regency period, Paul Storr’s magnificent neo-classical designs were much admired by Royalty and the English aristocracy, adorning palaces, and stately homes throughout Europe. His creations remain much in demand with contemporary collectors and can be seen in the collections of Windsor Castle, the V&A Museum, Buckingham Palace, The New York Metropolitan Museum, and a host of other leading public and private collections worldwide.

Born in 1770, Paul was the son of Thomas Storr of Westminster, a silver chaser by trade, which is the title given to a skilled craftsman responsible for adding three-dimensional design or detail to an unembellished piece of silver.

Following in his father’s footsteps, Paul was apprenticed in 1785 to the Swedish silversmith Andrew Fogelberg in Church Street Soho. Having gained his freedom in May 1792, Stoor entered a partnership with William Frisbee but the agreement was short-lived and Paul registered his first separate mark the following January.

Much of his early work is relatively simple and restrained when compared to the grandiose Neoclassical designs for which he would become renowned. One notable exception is the magnificent gold font produced for the Duke of Portland in 1797, currently in the collection of the British Museum. However, it is believed that the ornate figures surrounding the font were the work of a professional sculptor, rather than Storr himself.

Another exceptional early work is the Battle of the Nile Cup, which was commissioned in 1798 for presentation to Lord Nelson to mark his victory over the French that year. Currently in the collection of the Royal Museums, Greenwich, the cup’s handles are modelled as winged Egyptian figures, while the lid is surmounted with a sculpture of Neptune seated upon his throne, flanked by dolphins. We know from Nelson’s writings that he took the cup with him on subsequent voyages, affectionately referring to the piece as his ‘Turkey Cup’.

Now established as one of London’s leading silversmiths, Storr married Elizabeth Susanna Beyer in 1801 and the couple went on to have ten children. Elizabeth was also from a family of skilled craftsmen, being the daughter of Adam Beyer one of the most respected piano makers of 18th century London.

It was also around this time that Paul entered into partnership with the firm Rundell, Bridge and Rundell which elevated his reputation to the highest level. As Royal goldsmiths to George III and George IV, Rundells dominated the market for superior silver in the early 19th century. Recognising Storr’s talent, co-owner Philip Rundell began pursuing the gifted young silversmith, initially proposing that Paul sell his pieces through the Rundell’s shop. Indeed, some of Storr’s works at this time may have been commissioned through Philip Rundell.

The partnership was so successful that Paul was made a partner in the firm in 1811. However, throughout their working relationship, Storr insisted on keeping his own artistic identity, maintaining his own mark and creative control over his workshop, retailing under the trading name Storr & Co.

An exceptional example of Storr’s works of this period is the Theocritus Cup made for Queen Charlotte for presentation to the Prince Regent in 1812-13, currently in the Royal Collection at Windsor Castle. Based on the description of a pottery cup by Alexandrian poet Theocritus (c.300-260 BC), the cup is fashioned in silver-gilt and decorated with a scene of a maiden between two suitors after the "Orpheus" relief in the Villa Albani, Rome.

Another of Storr’s pieces from this time, a silver-gilt wine cooler, is currently held in the White House Collection. The cooler was one of a collection of 1500 objects donated by Margaret Thompson Biddle, a close friend of First Lady Mamie Eisenhower. The collection is on display in a ground floor room of the White House known as the Vermeil Room.

Sadly, Paul Storr found himself a victim of his own success during the prolific partnership with Rundell, Bridge and Rundell, as the demand for new pieces dictated that Paul became less of a creative force and more a manager of mass production.

Consequently, Paul resigned from the firm in 1819, opening a new workshop in Gray’s Inn Lane. Conscious of the need for a show window to market his works, Storr joined forces with John Mortimer, opening Storr and Mortimer in New Bond Street in 1822.

He finally retired in 1838, taking residence at Hill House in Tooting, which later became St Benedict’s Hospital before its demolition in 1981. Paul passed away in 1844 at the age of 73 and is buried in the church yard at St Nicholas Parish Church, Tooting Graveney. Enthusiasts can also visit a memorial to Storr at St Mary’s Church, Otley, Suffolk, which was installed in 1845 by his son Reverend Francis Storr who served as vicar of the parish for 35 years.