The Makers Series: Negretti and Zambra 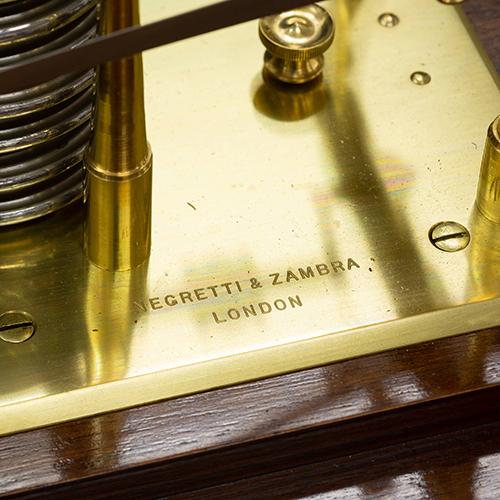 At the height of the British Empire, the London firm of Negretti and Zambra led the world in the manufacture of precision mathematical, scientific, and surveying instruments. The quality and superiority of their products earned them Royal patronage and a peerless reputation for excellence that would last for more than 100 years.

Co-founder Joseph Warren Zambra was born in 1822 in the Essex market town of Saffron Waldon. His father, Joseph Cesare Zambra, was an optician and barometer maker by trade and had emigrated from the Italian city of Como. Having served an apprenticeship with his father, Joseph junior moved to London to seek his fortune in 1840, making a home in the Anglo-Italian community that centred around Leather Lane in Holborn.

It was here that Zambra first met Enrico (Henry) Angelo Ludovico Negretti (born 1818), a fellow Anglo-Italian who, like Joseph’s father, had emigrated from Como, at the age of 10. Henry served his apprenticeship as a thermometer maker and glassblower and the pair decided to capitalise on their complementary talents by going into partnership. Negretti and Zambra was founded on April 23, 1850, operating from premises at 11 Hatton Garden.

Not surprisingly, the firm began by specialising primarily in barometers and thermometers, with a focus on models designed for taking deep sea and atmospheric measurements. Historically, instruments of this nature had been notoriously unreliable and Negretti and Zambra’s innovative approach and fastidious standards soon earned the fledgling company a number of patents for improvements in design and manufacture. 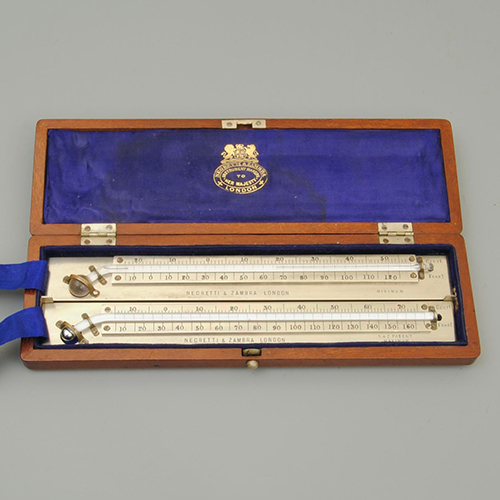 Success came so quickly that little over a year after commencing their partnership, Negretti and Zambra were able to exhibit their wares at the Great Exhibition of 1851, where they became the only English makers to receive a medal for their meteorological instruments. Consequently, the firm were appointed opticians and scientific instrument makers to Her Majesty Queen Victoria and her consort Prince Albert. They also received commissions from both the Royal Observatory and the Admiralty.

The company’s rapid growth allowed Joseph and Henry to indulge their passion for photography by opening a studio offering portraits and carte-de-visite, some of which can be seen here in the collection of the National Portrait Gallery. This photographic side-line would prove very profitable for the firm when they were awarded the contract as official photographers to the Crystal Palace Company, following the building’s relocation from Hyde Park to Sydenham Hill in 1854.

Negretti and Zambra photographed the glass structure and its landscaped grounds in detail and used the images to produce a collection of stereographs. These were handheld devices consisting of two images mounted side by side that, when raised to the eye, allowed the user to see a single three-dimensional image. A must-have novelty in all the best Victorian parlours, the stereographs could be purchased from the company’s personal showroom at the Crystal Palace. Before long, no event or exhibition in London was complete without a visual record captured by the cameras of Negretti and Zambra.

Now established as one of London’s leading photographers, Negretti and Zambra sought out new themes for their stereographs and sponsored an expedition by British photographer Francis Frith to Egypt, Nubia, and Ethiopia in 1856. They also funded celebrated Swiss photographer Pierre Rossier’s travels between 1855 and 1857, which resulted in the first commercial photographs of China, Japan, the Philippines, and Thailand, many of which can be seen in the Getty Museum collection. 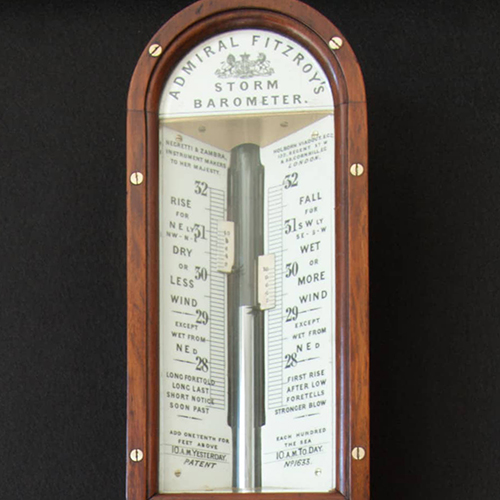 The company continued to innovate in the field of scientific instruments and in 1857 constructed a double bulb deep sea thermometer for Vice-Admiral Sir Robert Fitzroy. Fitzroy was Meteorological Statist to the Board of Trade and formerly captain of HMS Beagle, on which Charles Darwin voyaged during his studies of natural history. This was the first thermometer of its type capable of operating efficiently at depths of 15,000 feet and withstanding pressures of up to seven tons.

Another fascinating development, issued at Vice-Admiral Fitzroy’s request in 1863, was the Marine Gun Barometer, an improvement to allow ship’s Mercurial Barometers to withstand the concussion from the discharge of heavy guns. Testing was extremely thorough, according to a report from Captain Hewlett to Fitzroy, who noted, “five of the new pattern barometers were subjected to the concussion produced by firing a 68-pounder gun with shot and 16lb of powder.”

Innovations were not just limited to the nautical variety however, with the firm developing Aneroid Barometers for the pioneering balloonists, James Glaisher and Henry Tracey Coxwell. The pair tested a Negretti and Zambra barometer to its very limit in 1862, when they ascended to a height of more than 9500 metres. It is understood that Glaisher passed out at a height of 8,800 metres and Coxwell lost all sensation in his hands, but the barometer continued to function. Notably, Henry Negretti was also able to accompany Coxwell on a balloon flight in 1863 becoming the first photographer to capture aerial images of London in the process. 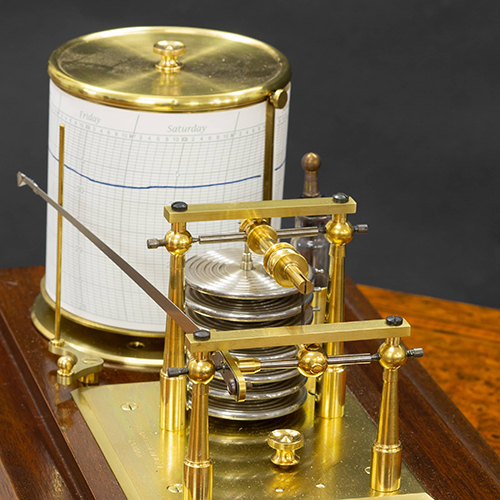 By now, no expedition, on land or sea was complete without a set of scientific instruments from Negretti and Zambra. The continued success allowed the company to broaden their range, offering telescopes, theodolites, binoculars, and even gun sights. As can be seen from this illustrated catalogue from the Smithsonian Libraries Collection.

As his social status rose, Henry Negretti became a leader of the Italian community in London, and even hosted the Italian revolutionary Giuseppe Garibaldi, during his time in the UK. In an even more surprising turn of events, Henry made history in 1865 by bringing the first successful private prosecution for murder. Thus, ensuring a pardon for fellow countryman Seraphino Pelissoni who was wrongly accused of killing Michael Harrington in a brawl at the Golden Anchor Public House in Saffron Hill. A full court transcript of the case, including Henry Negretti ’s evidence statement can be found here.

The outcome greatly enhanced Negretti’s standing, as evidenced by this extract from the Clerkenwell News, translated from an Italian newspaper, “The scene enacted at the English court of justice was utterly unparalleled in its annals; when the sentence of not guilty was pronounced by the jury, our Signor Negretti had some difficulty making his way through the crowd of Englishmen, who are always ready to applaud a good action, be it the work one of their own countrymen or that of a foreigner … our King, Victor Emmanuel, has, through the Italian minister in London, the Marquis d’Azeglio, conferred on Signor Negretti the honourable title of Cavaliere, a distinction never more worthily deserved nor more gracefully bestowed”

An indication of the firm’s renown at this time, came in November 1869, when they purchased new premises at 38 Holborn Viaduct, the opening ceremony officiated by Queen Victoria herself. The company continued to operate from these offices until 1941 when the building was destroyed by incendiary devices during the Blitz.

Henry Negretti died in 1879, aged 61 and his place in the partnership was taken by his son Henry P J Negretti. Negretti Jnr continued to work alongside Joseph Zambra, and his son (also Joseph) until Joseph senior took retirement in 1888. He died in 1897 and his monument at Highgate Cemetery is now a Grade II listed building.

Negretti and Zambra remained in family hands and played a major role in Britain’s war effort in the First and Second World Wars. Their work with the Ministry of Munitions between 1914-18 saw significant innovation in the field of early aviation instruments. Following the conflict, the decision was taken to focus much of the company’s output on projects for the Air Ministry. Consequently, at the outbreak of hostilities in 1939, Negretti and Zambra’s works were relocated to the relative safety of Chesterfield. Here they manufactured thermometers and boost gauges for the iconic Spitfire and Hurricane fighters, as well as the Lancaster bomber.