One of the most popular artists of the Edwardian era, Herbert Dicksee delighted a generation of animal lovers with his whimsical drawings of dogs and powerful ‘big cat’ paintings, which remain much in demand with contemporary collectors.

Herbert Thomas Dicksee was born in 1862 into a family already well known for their contribution to the London art scene. His father, John Robert Dicksee (1817-1905), was a portrait painter, genre artist and occasional lithographer who exhibited annually at the Royal Academy from 1850-1900.

He was also Head Drawing Master at the City of London School for more than 40 years and would certainly have played a major role in young Herbert’s artistic development. Perhaps John’s most notable achievement came in 1885 when he was chosen as curator of works for the private collection of the City of London. The collection, now permanently situated in the Moorgate area of the city, is better known as the Guildhall Art Gallery.

Herbert’s uncle, Thomas Francis Dicksee (1819-1895) was also an accomplished painter of portraits and historical genre paintings, as was his son, Herbert’s cousin, Sir Francis Bernard Dicksee (1853-1928), who held the role of President of the Royal Academy from 1924-1928.

Given his family’s stock-in-trade, it was inevitable that Herbert would seek his fortune in the arts, to which end, he secured a scholarship to the Slade School of Art at University College London. Whilst at Slade he came under the tutelage of Anglo-French artist Alphonse Legros, whose teachings clearly influenced the development of Dicksee as a master etcher.

At the time, Herbert was living in Fitzroy Square, a short walk from the London Zoological Gardens, the world’s oldest scientific zoo, at Regent’s Park. It was here that Dicksee discovered a passion for capturing the power and majesty of the lions, tigers and big cats that inhabited the gardens. 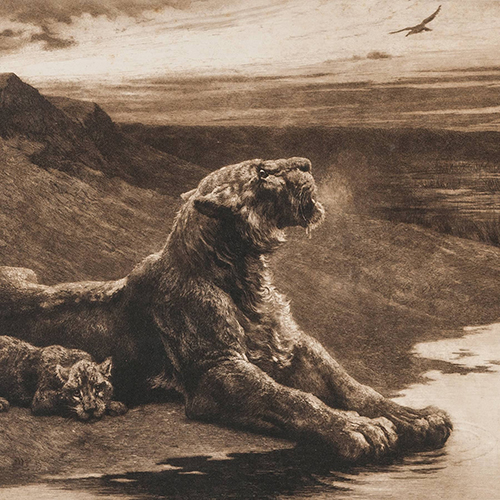 Ironically, Dicksee never travelled to Africa, or the Far East, which is remarkable given the accuracy and authenticity of his works. Instead, he enlisted the help of London’s zookeepers to persuade the animals to adopt the natural poses he needed to stimulate ideas for pictures.

According to a 1906 article in the monthly Windsor Magazine, Herbert would “...rise at 6 o`clock in the morning to visit the Zoological Gardens before visitors could arrive and obstruct his view. There he would be seen, morning after morning, making sketches of the lions and tigers in the reposeful intervals of their restless movements."

Consequently, Dicksee emerged as one of the leading wild animal painters of Edwardian Britain and one of the first generation of artists to create majestic, accurate, and energetic images of lions, leopards, and tigers. As a reward for his frequent visits and faithful renditions, Herbert was made a Fellow of London Zoo.

These compelling works gained Dicksee notable acclaim when he first exhibited at the Royal Academy in 1885. That same year, Herbert’s reputation was further enhanced when he was elected to membership of the Royal Society of Painter-Etchers and Engravers.

While Dicksee’s notoriety may have been spreading, his livelihood to this point had not been so glamorous. The bulk of his income deriving from book and magazine illustrations, and greetings card designs. However, his wildlife work soon elevated his status as an artist, with publishers clamouring to make mezzotints and lithographs of his most dramatic pictures.

Herbert helped drive the demand by exhibiting his works as widely as possible, not just in London but throughout the UK in galleries like the Glasgow Institute of Fine Arts, Manchester City Art Gallery and the Walker Art Gallery, Liverpool.

Away from his work, Herbert married Ella Maria Crump in 1896, daughter of Sir William John Crump, first mayor of Islington. They had two children, a son Maurice John, born in 1898, and a daughter Dorothy Sylvia, born in 1901.

Dicksee was also a dog lover, having up to six canine companions in his household, and would often use his own pets as sitters for his most popular etchings. These included a bloodhound, bull terriers, pugs, and his beloved French bulldog “Shaver”.

Herbert would spend many hours at a time working on these endearing and emotive images and the sumptuous attention to detail of each depiction is a major reason for the artist’s enduring appeal. Perhaps the most significant work of this time is “Where’s Master”, commissioned by King Edward VII in 1910, the image features the monarch’s favourite terrier Caesar lying fireside in repose by his master’s chair.

Another more intriguing Royal commission is this miniature “Tiger’s Head” circa 1923, which was made to grace the wall of the Library in Queen Mary’s Doll’s House. Both the etching and the doll’s house are now on permanent display in the Royal Collection at Windsor Castle.

In stark contrast to that miniature masterpiece is one of Dicksee’s most evocative works, the large-scale canvas, 'After Chevy Chase' (Battle of Otterburn 1388), currently in the National Trust Collection at Cragside, Northumberland. Based on an English folk ballad, the painting depicts the aftermath of battle with a deerhound howling in grief over the body of his fallen master.

The Dicksee’s suffered their own personal tragedy in 1918, when only son Maurice was killed in action in France, during the Second Battle of the Somme, whilst serving as a Lieutenant in the Middlesex Regiment. The loss may well have been a factor in the increasingly melancholy nature of Herbert’s later work.

Herbert Dicksee passed away at the family home he himself designed at Kidderpore Avenue in the North London suburb of Hampstead in 1942, not far short of his 80th birthday. As executor of his will, daughter Dorothy was instructed to destroy most of the plates used for his etchings, thereby making those cherished works that remain with us all the more important.