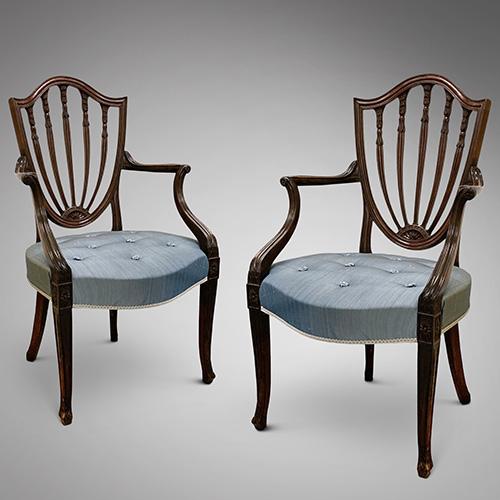 Alongside his contemporaries Thomas Chippendale and Thomas Sheraton, George Hepplewhite is revered as one of Britain’s finest furniture makers and designers, and yet comparatively little is known about the man himself.

Birth records show that a George Hepplewhite was born in 1727 in the town of Ryton, in what is now the borough of Gateshead, Tyne and Wear. Many sources suggest he served his apprenticeship with celebrated cabinet maker Robert Gillows of Lancaster, although we have no hard evidence to confirm the authenticity of either of these claims.

We do know that Hepplewhite opened premises at Redcross Street in the London parish of St Giles, Cripplegate and was a member of the London Society of Cabinetmakers, although the firm's only appearance in a trade directory erroneously lists the company as “Kepplewhite & Son”.

There are no items of furniture made by George Hepplewhite, or his company, known to exist, and no contemporary accounts of the time to suggest that the firm was fashionable or in any way popular with London’s elite. So how did George come to achieve such notoriety?

The answer is the ingenuity of his wife Alice Hepplewhite, who took charge of the company following George’s passing in 1786. In 1788, Alice published a book, “The Cabinet Maker and Upholsterer’s Guide” an illustrated folio containing nearly 300 of Hepplewhite’s designs. This was the largest publication of its kind since Thomas Chippendale’s “Director” had revolutionised the furniture trade in 1754.

Working in the Neoclassical style, Hepplewhite’s easily identifiable designs present a simple and elegant interpretation of the grand visions popularised at the time by architect and interior designer Robert Adam.

Instantly recognisable Hepplewhite motifs include the shield-shape chair back, short, curvilinear chair arms, and simple, straight tapering legs. These were usually presented without carving, which was unusual at the time, with Hepplewhite preferring lacquer or inlay to augment his designs.

The Guide proved so popular with clients that Alice published two further editions in 1789 and 1794, prompting some to suggest that they were not the work of George Hepplewhite at all, and that Alice had been the designer all along.

It would have been unthinkable for a woman to establish herself as a leading designer in the Georgian era. Indeed, Alice would only have been allowed to run the business as she had inherited it as a widow, so attributing the designs to her late husband would have been an excellent way to market her own artistry. Sadly, there is no evidence to support this amusingly subversive theory.

Regardless of their origin, Hepplewhite’s designs not only proved hugely popular in their time but continue to be reproduced more than 300 years after his death, while their simple and elegant features remain an important influence on the designs of countless contemporary furniture makers.