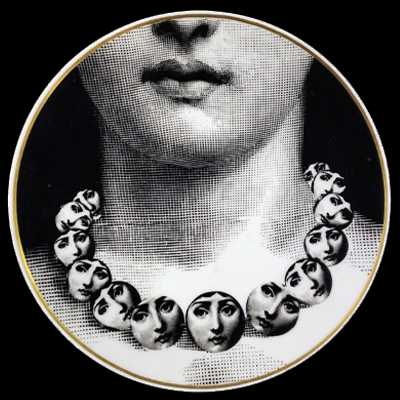 Piero Fornasetti was an Italian painter, artist and designer with an eclectic style. He was a very important figure in Italian industrial design culture, to such an extent that his name is internationally known. He was involved in a variety of disciplines, including painting, drawing, graphic and product design. In the course of his career he created over 13,000 works of art and was responsible for one of the largest outputs of objects and furniture of the 20th century. His inspirations include Piero della Francesca, Giotto, Renaissance frescoes and metaphysical painting.

From the early 1930s, Fornasetti began a phase of studying engraving and printing techniques. From his practice, he was able to work with artists of the time, printing artist books and lithographs for them. Through his experimentation, Fornasetti invented a printing method that allowed him to obtain graphic effects on silk scarves. In 1933, he proposed a series for the Milan Triennale V, which was rejected because it was off-topic but did earn him the attention of Gio Ponti.

In the early 1940s, Fornasetti produced a vast series of graphic works, including calendars, gifts, advertising images, programmes, posters and magazine covers. In 1943, he took refuge in Switzerland, where he continued his artistic research. This period was an unprecedented opportunity for him to create watercolours, oil portraits and drawings, mostly of the human body, which he would later use in his production of graphic arts.

In the 1950s, Fornasetti founded the design and decorative arts atelier in Milan: Fornasetti. This was prompted by his meeting with Gio Ponti, who pushed him to produce everyday objects that would bring art into people’s homes. He worked with the principle of “practical madness”, where creativity is in harmony with the utility of the object and the technical process of making it.

Fornasetti began work on his iconic series, “Themes and Variations”, in 1952. It started with the portrait of a woman, Lina Cavalieri, an opera singer who lived at the turn of the 20th century and was renowned as ‘the most beautiful woman in the world’ at the time. The image continues to be used (by Fornasetti’s son) on a series of everyday objects like porcelain, furniture and accessories, in several variations. In 1980, the “Themes & Variations” gallery opened in London, and shortly after, in 1987, he worked on a monograph of his work. The book was published posthumously; Piero Fornasetti died during a minor operation in hospital in 1988. After his death, his son Barnaba Fornasetti carried on with part of his father’s activity, and his work continues to be prized and collected worldwide.