The Makers Series: Flight and Barr 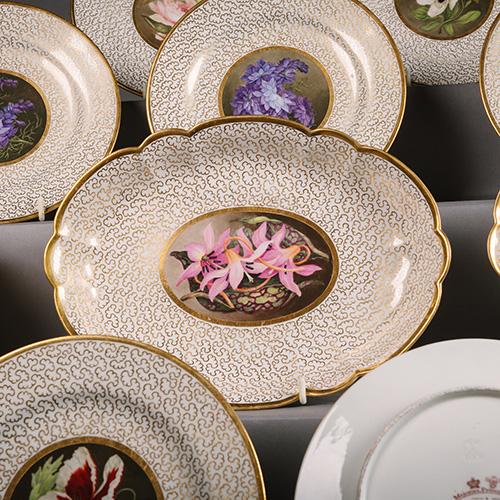 Although porcelain manufacture began in Worcester in the mid-18th century, it was the partnership of Flight and Barr that really put the city on the map. The firm helped earn Worcester Porcelain a world-renowned reputation and establish the city as a centre for high quality ceramics and craftsmanship.

The story of Worcester Porcelain begins with Dr John Wall (1708-1776) a prominent physician and co-founder of the Worcester Royal Infirmary. Together with William Davis, a local apothecary, Wall began experimenting with porcelain, with a view to establishing a new trade in the town, to rival the popular demand for Chinese export ceramics.

The pair based their studies on that of the Bristol porcelain manufacturer Lund and Miller, who used soaprock as their principal raw material. Wall and Davis secured the sum of £4500 in investment and opened a factory in the grounds of Wall’s mansion, at Warmstry House, Worcester, on the banks of the River Severn in 1751.

One of their investors, Richard Holdship then oversaw the takeover of the Lund and Miller works and purchased the companies’ soaprock licence which guaranteed the new Worcester works a delivery of 20 tons per annum, direct from the mine in Cornwall.

The wares produced at the time are known collectively as soft-paste porcelain, as they match the texture and translucency, but lack the strength of traditional Chinese export porcelain. Soft-paste porcelain pieces are much easier to scratch or break and, in rare cases, could shatter on contact with hot liquids.

Thomas Flight (1726-1800) had worked for the firm for some time as their London agent, when the opportunity arose to purchase the Warmstry House factory from William Davis in 1783. Even though none of the family had any experience in porcelain manufacture, Thomas believed that the factory would prove a sound investment for his sons Joseph (1762-1838) and John (1766-1791).

With the factory in a poor state of repair and beset with technical difficulties, the Flight works struggled in its infancy. These problems were further exacerbated from the outset by the departure of head decorator Robert Chamberlain, who left to set up his own rival factory in Worcester. 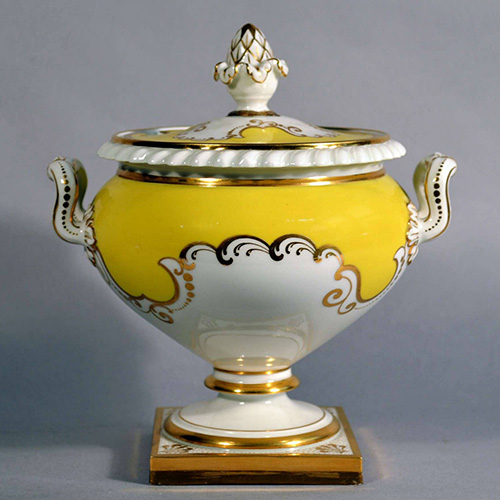 Seeking inspiration, John Flight travelled to the continent, visiting the porcelain factories of France, and found the innovation he was looking for in the hard-paste porcelain factories of Limoges. On returning to Worcester, he began replicating the sprig patterns and spiral fluted shapes he had seen at Limoges and the new style proved an instant hit.

Arguably, the biggest boost to the fledgling company fortunes came in 1788 when King George III and Queen Charlotte made a personal visit to the Flight factory. They ordered a breakfast tea service in the Blue Lily design, which was subsequently renamed Royal Lily in tribute to the Queen.

King George advised Flight to open London premises, and a new shop at 1 Coventry Street was opened shortly after. But the King’s greatest contribution came in 1789 when Flight was given the Royal Warrant and the Warmstry House factory renamed the Royal Porcelain Works. A remarkable rise in just six short years.

A less high profile but equally important milestone for the company that year, was the recruitment of Mrs Charlotte Hampton from London as head decorator. The separate skills of ceramic decoration were kept a closely guarded secret at the time, so the loss of one key member of staff could signal the downfall of a factory. Hampton had established a peerless reputation for porcelain gilding, developing a new method which used mercury to create a flawless finish.

It is said that Hampton’s work was considered superior even to the pieces produced under her forerunner Robert Chamberlain. Looking at the immaculate work on this oval plate and honey pot from a breakfast service in the Royal Collection, George III circa 1805, it is hard to argue to the contrary. 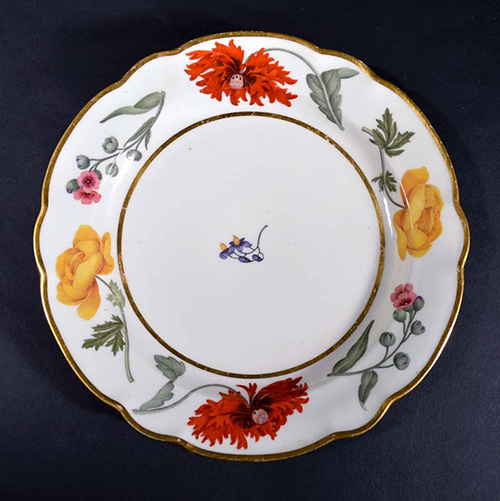 Another important asset to the factory was the artist John Pennington (1765-1842) who supervised the painting department at the factory for more than 50 years. His most notable work can be seen in the legendary Hope service, which was made for the Duke of Clarence, later William IV, for his residence at Bushey Park.

The commission was so prestigious for Flight that their fierce rivals at the Derby factory made every effort to poach the contract from them. The Duke paid 800 guineas for the service, which consists of more than 250 pieces and was put on display to the public before it was delivered to Bushey in April 1791.

Amidst all this success, tragedy befell the company when John Flight died that same year, aged only 25. To oversee the financial side of the business, Joseph flight turned to Martin Barr, a local accountant by trade, and the two entered into partnership as Flight and Barr in 1792.

Over the next decade three important innovations helped the company grow from strength to strength. Firstly, a new system of high-fired porcelain was created, triggered by the demand to produce high quality ceramics for their royal patrons. The technique, known as ‘Regent body’, helped Flight and Barr compete in terms of durability with the calibre of ceramics being produced both in Europe and China.

Secondly, a new method was developed for imprinting design outlines on to blank porcelain, which significantly improved the detail and quality of decoration on the firm’s products. Finally, John Pennington perfected the art of painting scenes and landscapes in monochrome, all of which kept Flight and Barr at the forefront of contemporary ceramic innovation.

In 1804, the company became Barr, Flight & Barr, after Martin Barr Junior joined his father in the partnership, and this period is often viewed as the pinnacle of the firm’s accomplishments. Fine bespoke services were produced for English nobility and aristocracy, often depicting the patron’s own properties, grounds or local landmarks. 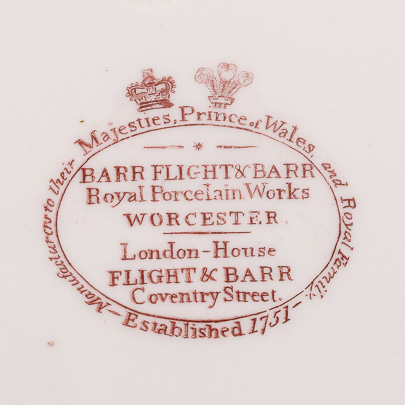 Further Royall Warrants were bestowed by the Prince and Princess of Wales in 1807 and 1808, respectively and so synonymous was the company with royal patronage that Barr, Flight & Barr began to be referred to commonly as Royal Worcester. In addition to British Royalty and nobility, notable clients of the era include Tsar Alexander I of Russia, The Imam of Muscat, and the Nabob of Oude.

Martin Barr Snr passed away in 1813 and the company became Flight, Barr & Barr with Martin Jnr’s brother George joining the partnership and Joseph Flight taking the role of senior partner. A trade card from this period can be seen in the private collection of the British Museum, advertising the companies London Warehouse at Coventry Street, and a Worcester Warehouse at 45 High Street.

The recruitment of Thomas Baxter as an artist in 1814 helped maintain the company’s reputation throughout the early 19th century. Baxter even opened a drawing school in the city where he taught many of the leading ceramic artists of the next generation.

However, the 1830s brought a change in the market as the financial power of nobility and the landed gentry was eclipsed by the vast wealth of the industrialists. Consequently, the taste for traditional neo-classical style ceramics waned as fashion favoured the neo-rococo movement. Reluctant to change the designs that had brought them so much success, Flight, Barr & Barr found demand for their exquisite porcelain falling.

The death of Joseph Flight in 1838 proved the catalyst for change and in 1840 Flight, Barr & Barr merged with their former rival Chamberlain. The merger would prove a huge success seeing the company grow from 70 to 700 employees over the next 40 years and thriving well into the 20th century under the guise of Royal Worcester.

Anyone wishing to learn more about Flight and Barr can find a wonderful and priceless collection of rare ceramics and historical insights at the Museum of Royal Worcester. Ironically, the Museum is housed at Severn Street, Worcester, the premises set up by Robert Chamberlain after his departure from Flight and Barr in 1783.