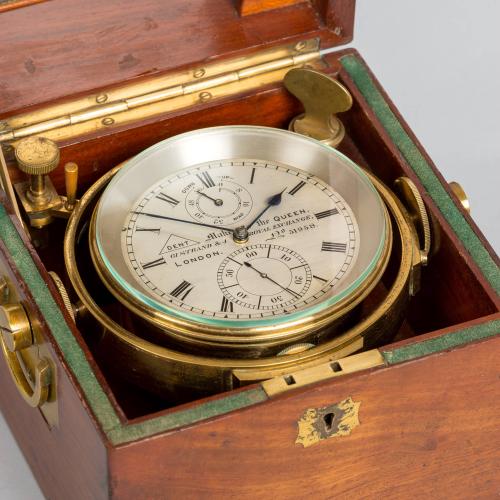 Established in 1814, Dent London quickly earned an unparalleled reputation for the accuracy of their clocks and marine chronometers, earning them the patronage of monarchs, and famed explorers, as well as some very famous public commissions.

Born in 1790, Edward John Dent was just three years old when his mother passed away and was apprenticed to his grandfather, a candle merchant, at the age of 14, finding lodgings with his cousin Richard Rippon.

Rippon was a watchmaker by trade, and the young Edward became so fascinated by his work that in 1807 he was able to persuade his grandfather to let him serve out the remainder of his apprenticeship with the Clerkenwell based watchmaker Edward Gaudin.

Over the next few years Dent was employed by several of London’s leading watch and clockmakers, often with introductions from Richard Rippon. He gained valuable experience with master clockmakers Vulliamy, and in the manufacture of marine chronometers through his work with Barraud & Sons.

By 1814, with his reputation blossoming, Dent had begun to produce clocks and chronometers under his own name. Notable works included the construction of the first Standard Astronomical Clock for the Admiralty and chronometers for the African expedition by the British Colonial Office.

In addition to his personal and commission work, in 1828 Dent was employed by the Royal Observatory Greenwich to maintain their chronometers. Indeed, the Astronomer Royal, John Pond, in a letter to the board of Ordinance the following year, described Edward as “among the best workmen of the present day.”

His burgeoning reputation was boosted further in August 1829 when Dent won the First Premium Award at the Seventh Annual Trial of Chronometers for his Marine Chronometer No. 114. An accolade Edward displayed frequently in his advertising to further cement his credentials.

In 1830, aged 40, Dent took his business acumen to the next level by entering into partnership with fellow master chronometer maker John Roger Arnold, under the name Arnold & Dent.

A significant milestone for the company came the following year when a number of Dent and Arnold’s chronometers, including Dent chronometer No. 633, were taken by Captain FitzRoy on board HMS Beagle. A passenger on the voyage was Charles Darwin, whose experiences on board led to the publication of his ground-breaking work on evolution, “On the Origin of Species”.

Two decades later the explorer David Livingstone purchased Dent Chronometer No.1800 for his expeditions in Africa. While fellow adventurer H. M Stanley wrote that the chromometers supplied to him by Dent “proved a very great service to me” on his own travels throughout Africa.

Although a hugely successful partnership, Edward became increasingly frustrated at not being able to takeover the business and Arnold & Dent parted company in 1840. Now working under the name E. J. Dent, London, Edward went from strength to strength with a string of achievements over the next decade.

In 1841 Dent earned the Royal Warrant as watch and clockmaker to Queen Victoria and Prince Albert, a title the company would hold through to the reign of George V. They also held royal warrants to Russian emperors Tsar Alexander III and Tsar Nicholas II and to Japan’s Emperor Meiji from 1880.

Aged 53, Dent married Elizabeth Rippon in 1843, who was the widower of his mentor Richard Rippon. His two stepsons, Frederick William and Richard Edward were later required by the terms of Dent’s will to take his surname and would continue the business after his passing.

That same year the company was recommended by Astronomer Royal Sir George Airy for its largest project yet, the construction of the Great Clock of the Royal Exchange, London. On its completion in 1844, Airy stated “I believe the Clock you have constructed for the Royal Exchange to be the best in the world, as regards accuracy of going and striking.”

Innovation was also an important element of Dent’s success; in 1846 Edward secured patent for “The Keyless”, the first watch to be wound and set at the crown, thereby dispensing with the use of a key, an invention that revolutionised the watch making industry.

At the Great Exhibition of 1851, Dent displayed a turret clock to great acclaim, winning the only Council Medal awarded for Horology. The device was subsequently dismantled from the Crystal Palace and moved to the tower at King’s Cross Station where it remained until 1965.

Arguably. the company’s most recognisable work was commissioned a year later when Sir George Airy, awarded Dent the contract to construct the Great Clock, now better known as Big Ben, at the Houses of Parliament, Westminster for the princely sum of £1,800.

Sadly, Edward passed away in 1853, leaving stepson Frederick to oversee the completion of the work the following year. One of London’s most iconic landmarks, Big Ben remains a visual testament to the skill and ambition of one of the world’s greatest clock and chronometer makers.

Image from the stock of Raffety Ltd.