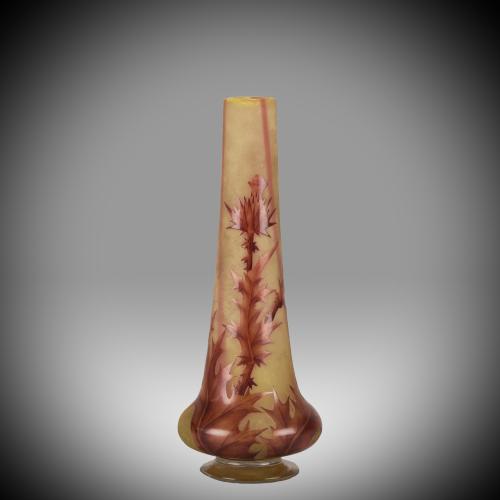 Based in the beautiful city of Nancy in North-eastern France, Daum Frères is famed for producing some of the finest and most innovative art glass of the Art Nouveau period and remains one of the world’s leading master glass and crystal makers to this day.

Like many French artists, craftsmen, teachers, and business leaders the Daum family migrated to Nancy after France’s defeat in the Franco-Prussian War of 1870. Under the terms of the Treaty of Frankfurt in 1871, Germany gained much of the former French provinces of Alsace and Lorraine, prompting a mass exodus from the regions.

As Nancy was the first major conurbation within the redrawn French border, it naturally became home to many of these migrants, rapidly increasing the size of the city’s population and helping Nancy become the major political, economic, and cultural centre of the region.

Ironically the family patriarch, Jean Daum, had no experience in the glass making trade having trained and worked as a notary in the historic Lorraine town of Bitche. Jean took ownership of the struggling Saint Katerina glass works as part of a debt repayment, rebranding as the Verrierie de Nancy in 1878. However, despite expanding production and hiring new workers the company’s output focussed predominantly on glass for watches, windows, and tableware, following their father’s death in 1885. Collectively they revamped the firm from top to bottom with Auguste taking on the day to day running and management of the glassworks while Antonin, who had trained as an artist and engineer, became responsible for the studio’s art direction.

Keen to embrace the burgeoning Art Nouveau movement which took root in Brussels and Paris in the early 1890s, the brothers were also heavily inspired by the work of fellow Nancy based art glass maker Émile Gallé. Gallé had exhibited his works to notable acclaim at the Paris Exposition Universelle of 1889.

One of the keys to Daum Frères rapid success was their constant desire to experiment and innovate. They began enamelling and engraving vases at the glassworks in 1891, incorporating the natural forms of flowers, fruit, vegetables, and trees in the art nouveau fashion.

By 1893 they were producing fine cameo glass pieces which combined multiple techniques such as intaglio carving and acid etching. They showed their designs at that year’s World’s Columbian Exposition in Chicago, establishing the signature “Daum Nancy” as a mark of quality and gaining the company an international reputation.

Another major factor in their success was the brothers' enthusiasm for working with talented artists and craftsmen, inviting many to create sketches for their beautiful multi-layered glass designs. This led to Antonin’s involvement in the founding of École de Nancy in 1901, a movement of Art Nouveau artists and makers led by Émile Gallé, Antonin and the furniture designers Louis Majorelle and Eugène Vallin.

The brothers also brought innovation and creativity to marketing their business. Where Gallé was fiercely protective of his magnificent bespoke designs, Daum Frères understood the value of publicity, rapidly building their audience through the production of commercial and exhibition catalogues, as well as using object photography to generate press coverage.

By 1900, Auguste and Antonin’s innovations had proved so successful that they were awarded the prestigious Grand Prix medal at the Paris Exposition Universelle of 1900. Daum Frères had by now become serious competitors to Émile Gallé and when the glass master passed away just four years later, Daum were established as undisputed leaders in their field.

Far from resting on their laurels, Daum continued to innovate, investing in the successful revival of the ancient Egyptian Pâte de Verre technique in 1906. The process entails using crushed glass heated in a mould to create refined forms, enabling the company to move away from a reliance on hand-crafting and towards a more cost-effective mass production system.

After Auguste’s death in 1909, Antonin took over the administration of the company, with their nephew Paul Daum taking charge of artistic direction, until production was shut down by the outbreak of war in 1914 and the factory was converted into a field hospital.

In typically resilient fashion, Daum Frères reopened for business at the close of hostilities in 1918. They adapted their practices and the style of their creations for the emerging Art Deco movement, whilst still maintaining the quality and craftsmanship synonymous with their earlier work.

To this day, Daum continue to produce fine limited edition art glass and crystal pieces and are still based in their original glassworks at the heart of Nancy. To discover more about Daum Frères, collectors and the curious can enjoy a visit to the world’s largest collection of more than 600 Daum works, housed at Nancy’s Fine Art Museum.

Image from the stock of Hickmet Fine Arts.