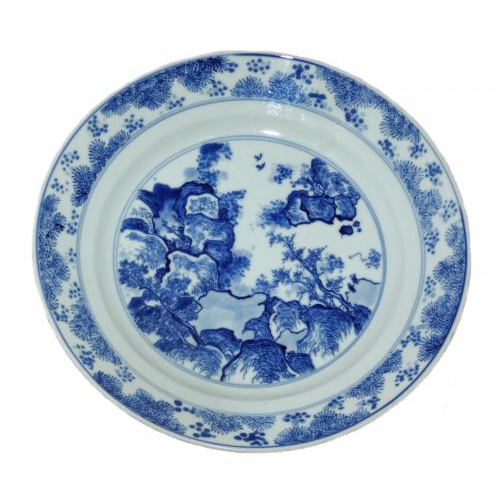 The painting of monumental landscapes on porcelain was influenced by the Ming scroll painters with their impressive free flowing landscapes. In the 17th century this was used to add a flourish to porcelain, and Gerald Reitlinger coined the term ‘Master of the Rocks’ for this group of porcelains.  By 1700 this had developed, becoming just a quick brush stroke for the mountain in the background of a landscape.

Mountains and the landscape are an important part of Chinese folklore and culture which emanates from Ancient times where the cult of the Mountain began, where they were worshipped and revered. In cosmology the mountain – Shan - was as important as the Emperor was to Society and Civilisation.  As the mountain was seen as unchanging, its presence was seen as preserving order and maintaining stability.  All mountains were topped by a Temple for the worship of the immortal who resided on that mountain. The cult of the mountain revolves around the five major peaks of China and these peaks will appear in many forms in objects used by the scholar class, such as a five peaked brush rest, an inscribed wrist rest and as motif on porcelain. 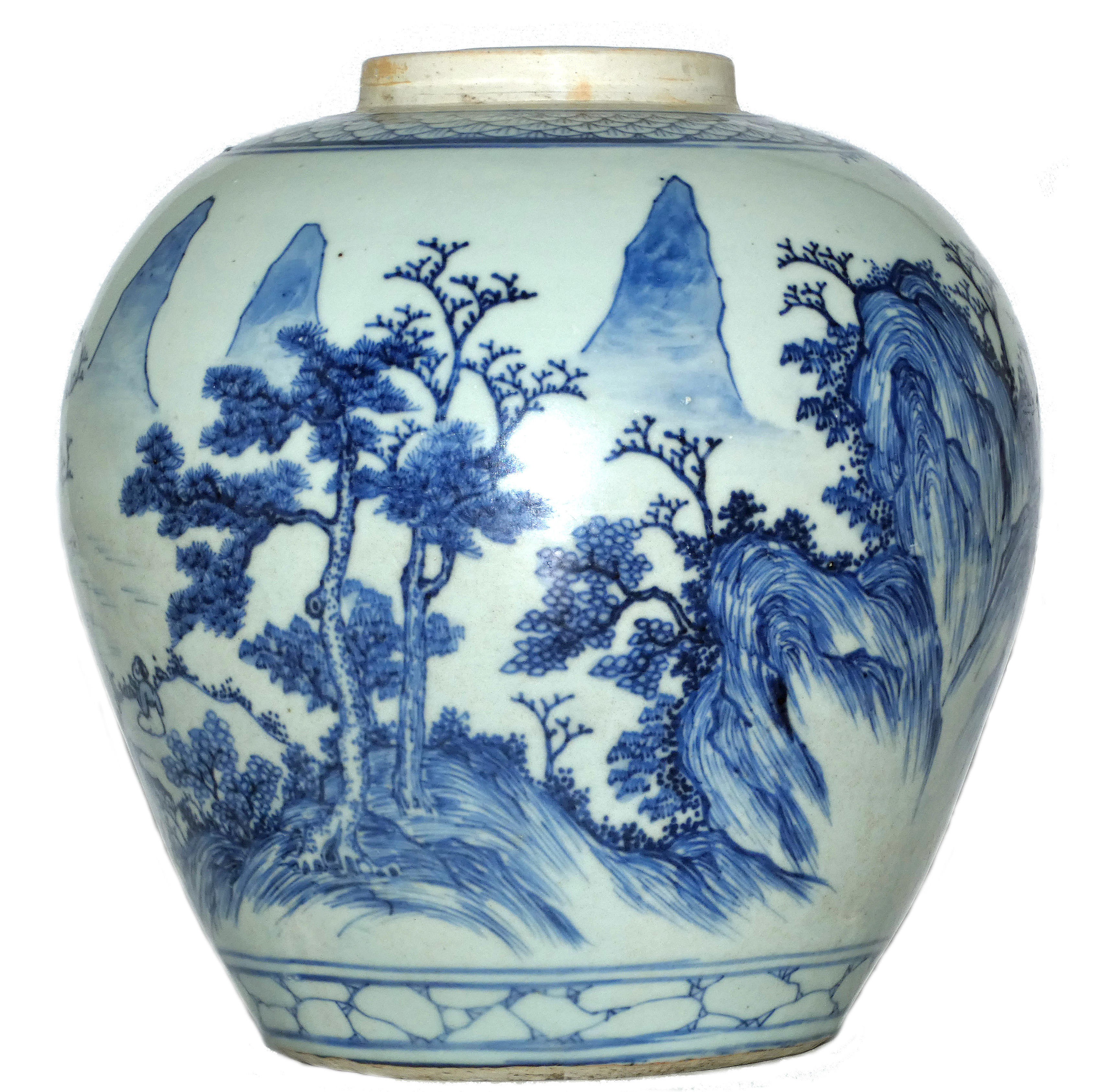 The five peaks are very important to Chinese culture but there are also mountains associated and important to the Buddhist religion, which flourished in China. For example, O – Mi in Sichuan or the mysterious Kunlun, which is similar to the mystical Sumeru of Indian mythology. Both mythological mountains are legendary for their hanging gardens, nine terraces, fabled palaces of the immortals and fountains and streams. Kunlun is also the source in mythology of the four great Chinese Rivers including the Yellow River and the Yangxi.

Both the plate (above image 1) and jar (above image 2) are Master of the Rocks type pieces showing mountains and wooded slopes. The jar shows three of the five peaks, and the terrace where the scholar is sitting indicates that one is the Kunlun mountain. 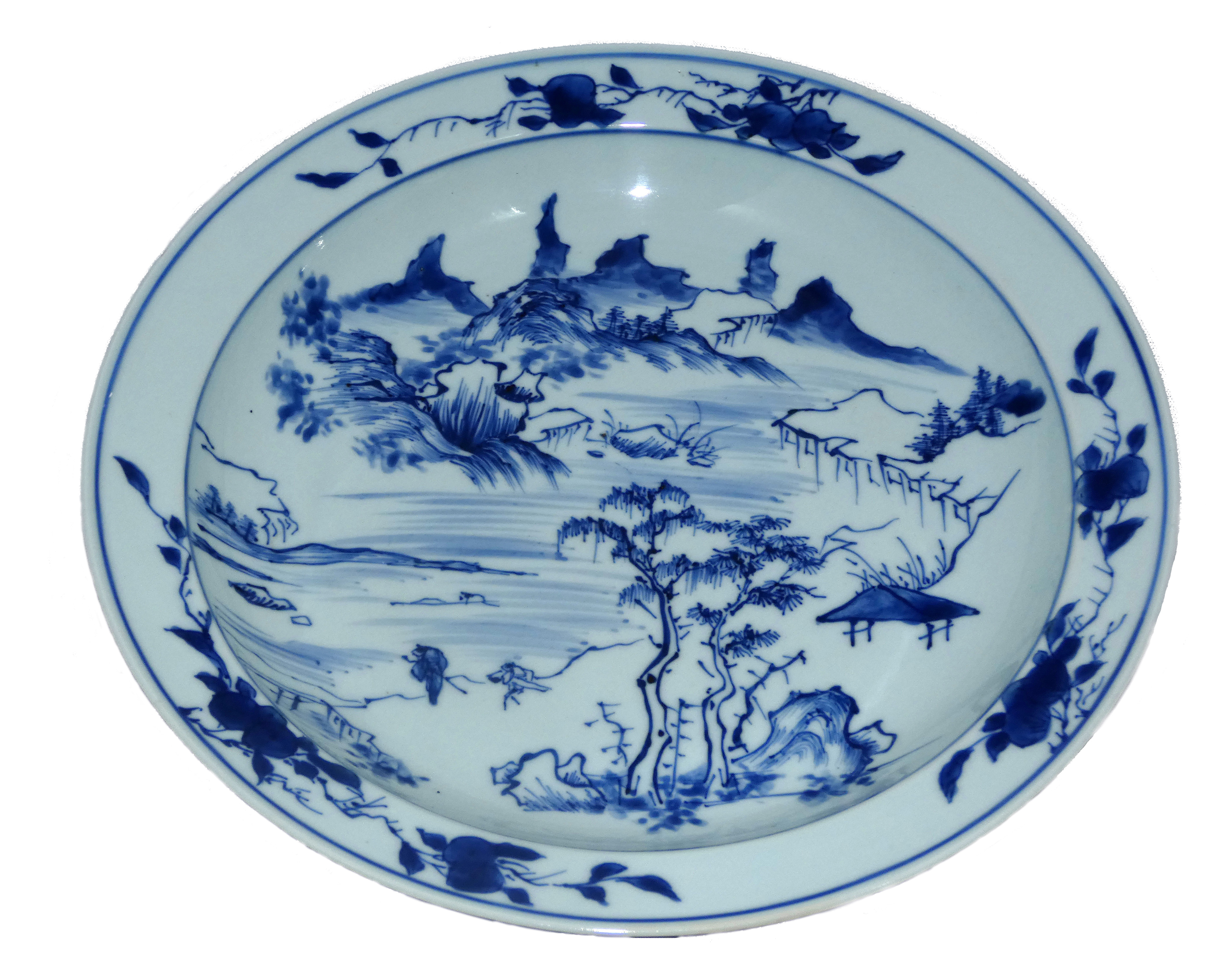 It was believed that if you could climb all the way to the top of the Kunlun that you would be greeted by the Queen Mother of the West and immortality would follow. The Queen Mother of the West was not the only immortal residing there but was the only one that received mortals. The peak of the Kunlun was also said to be the origin of the 10,000; where the Yin and the Yang alternate with each other forever.

Mountains were often depicted with a water motif, as shown on the 17th century Master of the Rocks type plate (image 3 above).  When water and mountains are shown together, it is seen as a metaphor for China itself. This design type can be found as far back as the 10th century.  Landscape painting such as this allowed for expressiveness.

It was the Transitional period at the end of the Ming Dynasty and the start of the Qing dynasty when the use of landscape painting on porcelain reached its zenith. 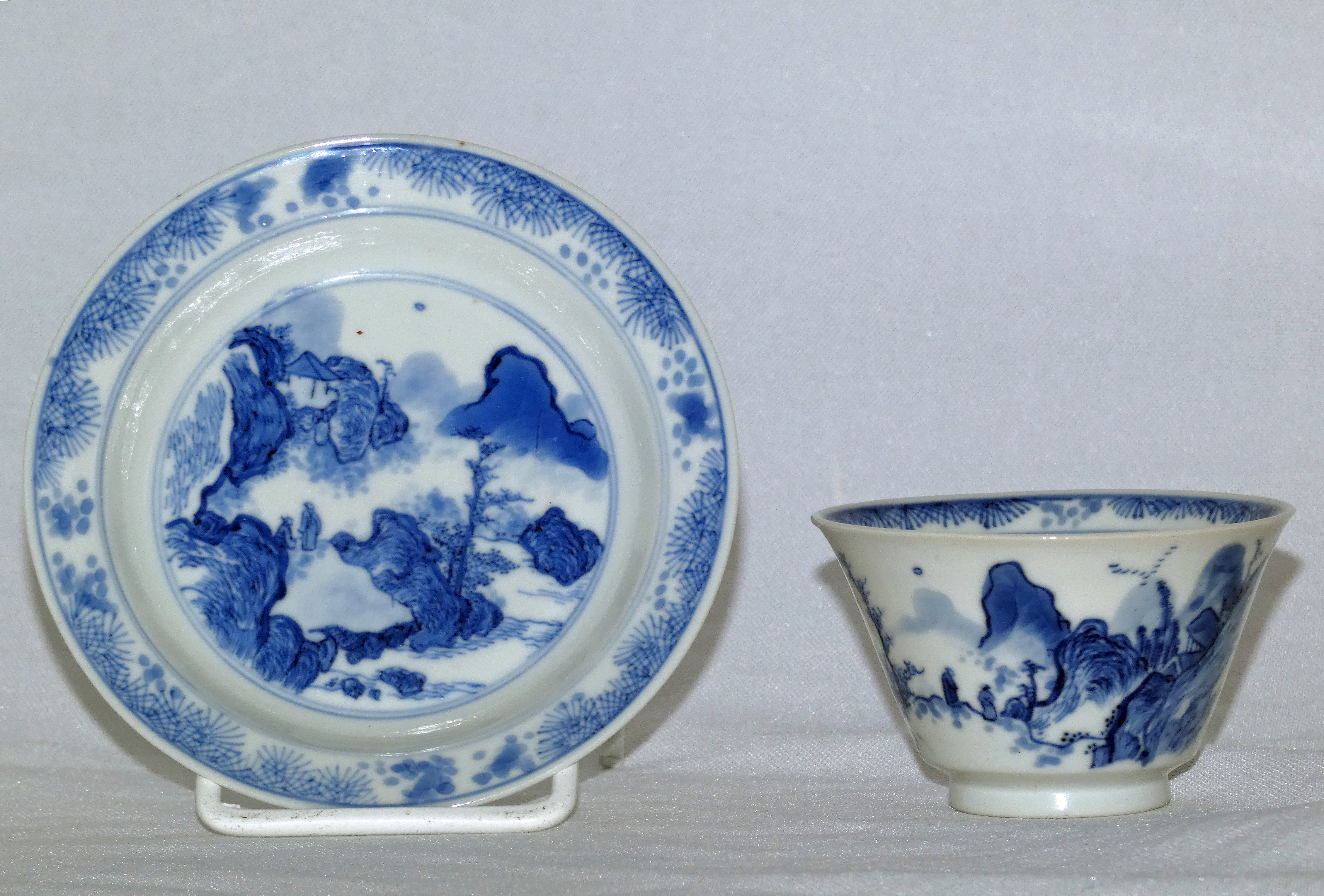 It was never an Imperial or palace design but belonged totally to the literati taste. 17th century design moves away from the earlier Ming designs and shows large mountains, often with wooded slopes, lakes, rivers, or sea; with a figure crossing a bridge; figure(s) in a boat, or even a solitary or a pair of very small figures.

The rare tea bowl and saucer (image 4 right) made in the 17th century shows clearly all the influence of the new literati, with a scholar and attendant on a mountain terrace, a temple on a peak and pine trees.

It is said that where a boat is pictured that is clearly not a fishing boat, it is a pictorial reference to the poem ‘ Ode to the Red Cliff’, written by Su Shi (1037 -1101) in 1082. An example of this can be seen on this Master of the Rocks Type plate (image 4 below) where a boat is travelling across the scene. The Red Cliff is favourite poem of the 17th century and used in many designs. 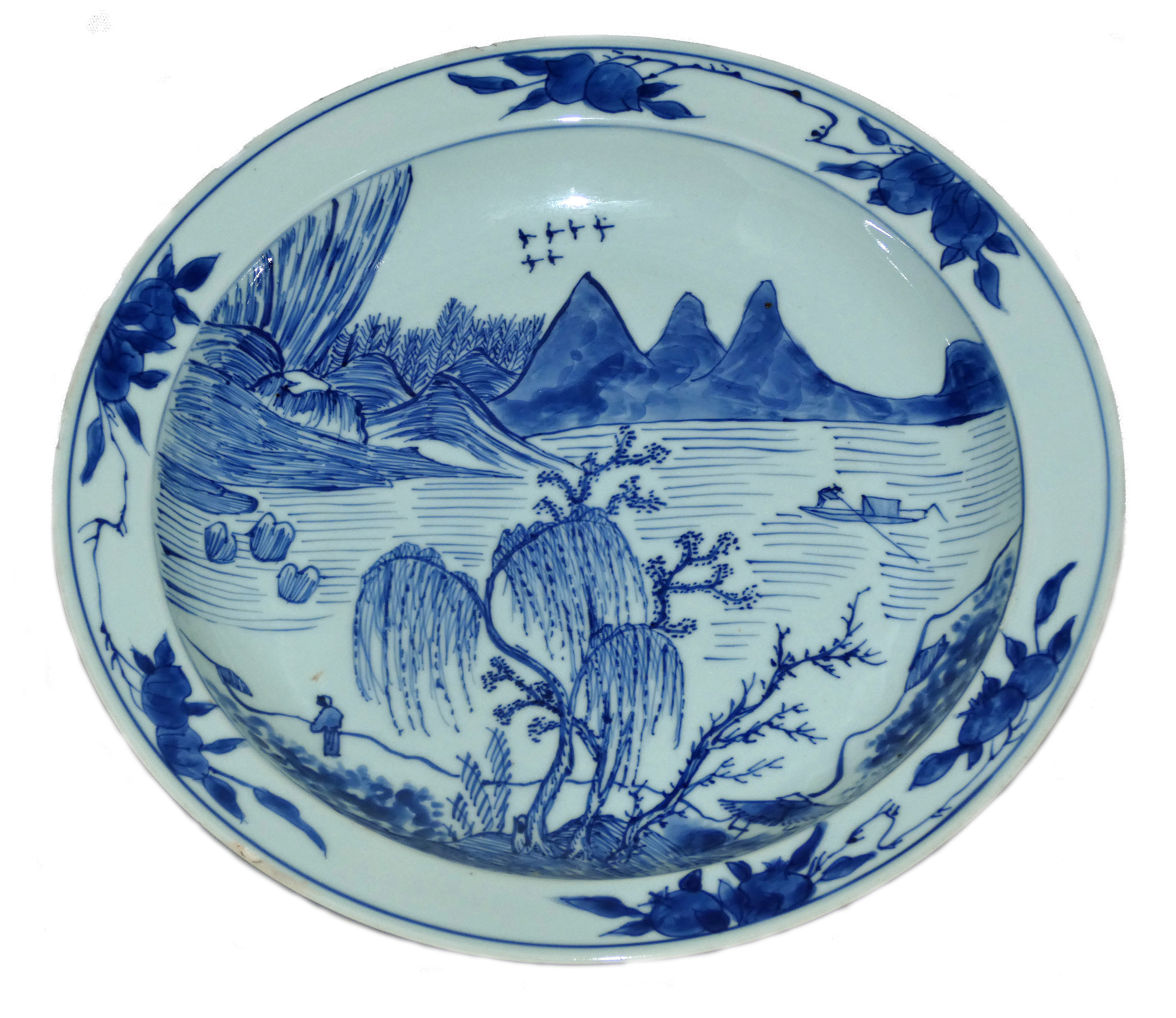 The group of porcelains known as Master of the Rocks rightly commands respect for the vibrant colour of cobalt, the sophisticated use of paint and the intricate, skilled patterns. The skill of the kiln workers should also not be forgotten as the temperature they were achieving was higher than before and therefore bringing the blue to an astonishing violet hue. But painting on porcelain was and still is a difficult skill to learn and the more elaborate the pattern the more care and time was needed.

The end of the Ming Dynasty had seen a nation virtually destroyed by the greed, avarice and ineptitude of rulers and lack of economic stability. The new Qing rulers had to revitalise an economy to help establish their power base.  This came at the same time as the Western nations were looking to expand trading routes and bring wealth to their countries. In Europe, there was a higher demand for Chinese porcelain due to changing tastes.  Larger quantities were required and this had a knock-on effect to the design of porcelain.

The designs became simpler, with an amalgam of East and Western shapes and patterns.  The soaring mountains gave way to a simplified form, and the landscape became more of a back drop to jumping boys and ladies or deities.

This early Kangxi vase (image 6 right) shows how scenes of nature became more general over time, with less focus on mountains or specific elements. Kangxi plates often have a quickly-drawn element on the underside of the cavetto to represent mountains, whilst the front of the piece will depict human figures.

Mountains have in all cultures and religions played a mystical role and have stories, myths and religions entwined around them, but the cult of the mountain inspired such wonderful paintings on scrolls and ceramics and formed works of art in jade, bronze and wood.  The Chinese ability to create such items and art works make them a fantastic basis for a collection.

To find out more about Catherine Hunt Antiques click here