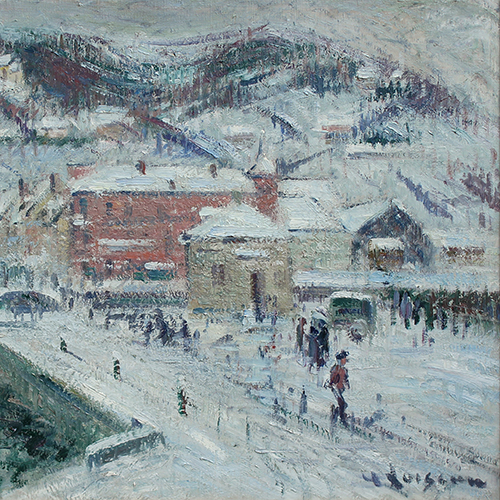 Born and raised in Paris, Gustave’s parents owned a butcher shop, but young Loiseau showed little interest in the family trade. He served his apprenticeship with a decorator, who was a family friend, then studied life drawing at École des Arts Décoratifs using an endowment from his grandmother to fund the course.

Sadly, his tenure was short lived as Gustave left the school a year later following a disagreement with his tutor. Returning to work as a decorator, Loiseau worked on the apartment of landscape artist Fernand Quignon and successfully convinced the artist to tutor him in his craft.

Like many artists of his time, from 1890 Gustave began spending his summers at the commune of Pont-Aven in Brittany. It was here that he developed friendships with Paul Gauguin, Emile Bernard, and Henry Moret, all of whom had an influence on the young artists maturing style. 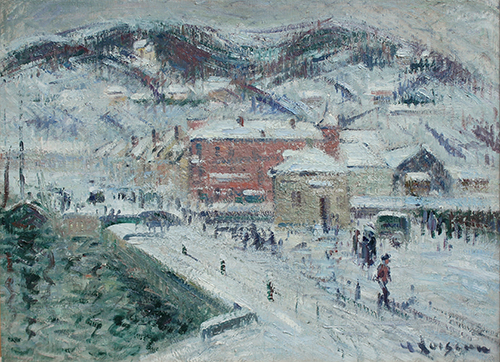 He began showing his works at Impressionist exhibitions in 1890 and first exhibited with some acclaim at the Société des Artistes Indépendants in 1893 and later at the Société Nationale des Beaux-Arts in 1895.

Inspired by the contrasting effects of light on the landscape, Gustave would frequently revisit the same settings, painting at unusual hours of the day to capture the dramatic variances of time and season.

Loiseau’s most powerful works display his trademark technique of cross hatching which he employed to great effect to capture the energy and motion of fast flowing rivers or snow filled skies, as exemplified in this particular piece.