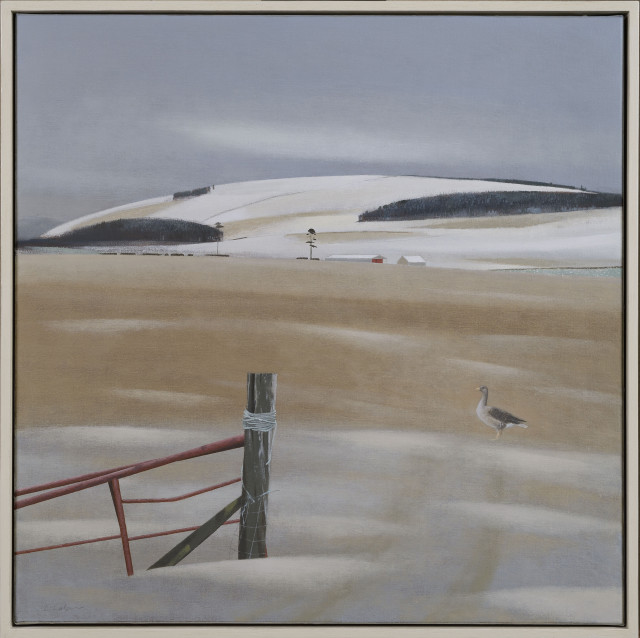 Born in Kirkcaldy in 1956, Tom Mabon enrolled at Gray’s School of Art, Aberdeen, in 1974. There he studied under the artists Frances Walker and Sylvia Wishart, and it is a testament to the young Mabon’s talent that Wishart purchased one of his early works, now held in the Orkney Museum. As a student Mabon focused on abstraction, but realising that the artists whom he most admired were figurative painters, he switched his style almost overnight, and gained immediate praise in The Scotsman when he exhibited his first figurative work at the Society of Scottish Artists’ Annual Exhibition, before winning the Royal Scottish Academy’s prestigious Latimer Award the following year.

At the time, Mabon did not know any artists making a full-time living from their work, or that pursuing a career as a painter might even be possible, and chose to become an art teacher. For the next 37 years he continued to paint in the evenings and at weekends, holding many solo shows. Since retiring from teaching in 2016, he has enjoyed devoting himself fully to painting, charting the changing seasons of the Scottish Highlands from his home on the Black Isle. The paintings in this exhibition, however, are inspired by two artistic pilgrimages, the first, in the spring of 2019, to the ancient cities and hilltop villages of Tuscany, and the second, in the autumn of the same year, to Provence.

The artists of northern Europe have long been fascinated by Italy, from the Dutch and Flemish Bentvueghels of the seventeenth century, to the German Nazarenes of the nineteenth, both of whom found inspiration in the ancient ruins of Rome. Mabon, however, was drawn to Florence, his visit inspired by an eighteenth-century engraving after a Filippino Lippi fresco in the Brancacci Chapel, purchased in an antiquarian bookshop in Inverness. In visiting Provence, he was inspired by the still lifes and landscapes of Cézanne and van Gogh, and careful observers will find a homage to both painters in Mabon’s Still Life in Aix and Window in Arles.

When asked to describe his work in just three words, one that springs to Mabon’s mind is ‘tonal’, and his subtle palette beautifully captures the growing warmth of the Italian sun on a spring day, or the fading light of autumn twilight in Provence. Another is ‘considered’, a lasting influence of the tutors whom he admired, and whose careful application of paint he shares. Perhaps we can also detect Mabon’s early study of abstraction in his attention to composition, which in each painting begins with snippets of scenes sketched or remembered, and is developed and honed in a process that sees works turned to the wall in his studio, sometimes returned to months or years later. The first word chosen by Mabon to describe his work, however, is ‘quiet’, and his landscapes are imbued with a stillness that offers peace and reflection in an ever- changing world.

At a time when so many of us are confined to our homes in the midst of a northern winter, the paintings in this exhibition remind us all of the beauty and joy of southern European light. Several of their titles are inspired by Dante’s Divine Comedy, which Mabon was reading as he executed them. As we view them, however, we might perhaps be reminded of another great work of Florentine literature, Boccaccio’s fourteenth-century Decameron, whose young protagonists escape the plague-ridden city for an abandoned villa in Fiesole, to the north of Florence. There, safe in their rural haven, they enjoy the tranquillity of its gardens, distracting and entertaining their companions with amusing tales, and the book has long been viewed as a symbol of the importance of human creativity and resilience.

Until we can visit Italy and France again, we hope that you enjoy these works, a celebration of remembered places, and southern light.