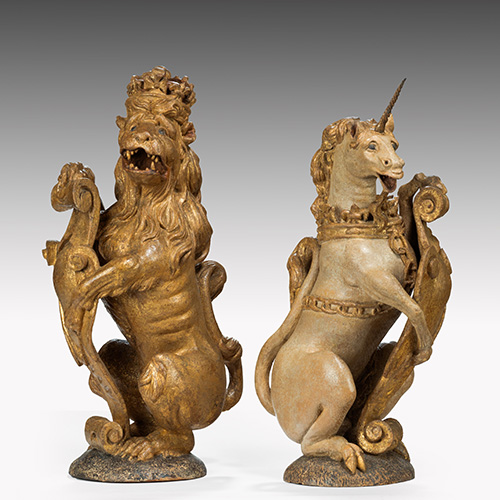 For BADA Week 2022, Thomas Coulborn & Sons have chosen to feature this magnificent pair of carved oak James I supporters.

Carved in oak and with a polychrome painted and gilded surface, they stand out due to their extraordinarily good condition following expert conservation and demonstrate that Thomas Coulborn & Sons is committed to investing in researching and presenting works to the highest standard.

The conservation process for these supporters took over three years, during which time multiple layers of dirt and additional paint were painstakingly stripped back one by one to reveal the original finish.

Thomas Coulborn & Sons also commissioned a C14 CIRAM Scientific Report to establish accurate dating of these supporters, which found that the wood dated from the 16th century and had been cut and carved in the 16th or early 17th century.

In the form of a lion and a unicorn, supporters of the Royal Arms. The lion and the unicorn are symbols of the United Kingdom – taking the form of heraldic supporters. The lion symbolises England and the unicorn symbolises Scotland. This combination dates back to 1603, when King James VI of Scotland succeeded Elizabeth I when she died without children. The Scottish Royal Arms had used two unicorns as shield supporters; whilst the English Arms had used a variety of supporters, but had most frequently included a lion. James I placed a lion upon the left of the new Arms, and a unicorn upon the right. However, the rampant red lion had always been the primary symbol of Scotland. 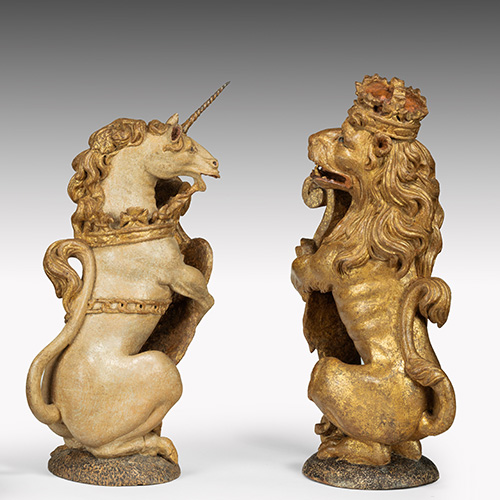 Both modelled holding scroll-edged vacant shields and set on a domed base. The lion is depicted wearing a crown, standing erect with its forepaws raised – ‘rampant guardant dexter’. The unicorn is carved facing to the sinister and in the manner of the supporter to the Royal Arms, described by John Vinycomb as: ‘[a] unicorn argent, armed, unguled, crined and gorged or, with a royal coronet, having a chain affixed thereto, and reflexed over his back of the last.’ (‘Fictitious and Symbolic Creatures in Art’, John Vinycomb, Evinity Publishing Inc, 2009, p.129). The term‘armed’ references the horn; ‘unguled’ references the hoofs; ‘crined’ references the flowing mane; and ‘gorged’ indicates that the coronet encircles the unicorn’s ‘gorge’ or throat. The term ‘or’ means the metal gold or the tincture of it.

Heraldic beasts were used in many different interiors: country houses; townhouses; livery halls; boardrooms of various institutions; churches and places of worship; and warships. As a result, the purpose for which these pieces may have been carved remains unclear. This pair of heraldic beasts may have been carved as newel post finials of a grand staircase; or as finials for a church or a livery hall. 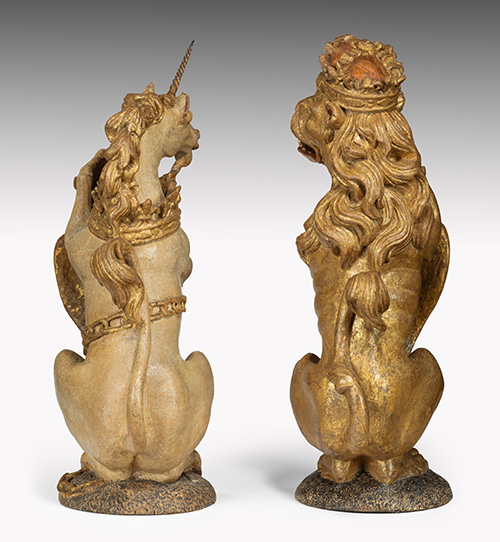 In 20th century Britain, over 1,000 country houses were demolished. This phenomenon was brought about by a change in social, political and financial conditions – high taxation, death duties, and the loss of aristocratic heirs as well as workers to manage the estates following the two World Wars – which led to landed families selling estates and a large number of country houses being demolished. On 4 May 1912 ‘Country Life’ carried an advertisement for the ‘Stone Balustrade containing 140 turned balusters; 80 half-balusters; 13 massive pillars’ and ‘13 urns’ from Trentham Hall, Staffordshire, which were being sold for £200. This was a hint of things to come. In 1944 the trustees of Castle Howard began selling the contents of the house; the Duke of Bedford reduced Woburn Abbey to half its original size in 1947; and Alfred Waterhouse’s Eaton Hall was razed to the ground in 1963. From the turn of the 20th century, interior woodwork, including complete panelled rooms, staircases and fittings such as these heraldic beasts secured an active market amongst rich Americans.