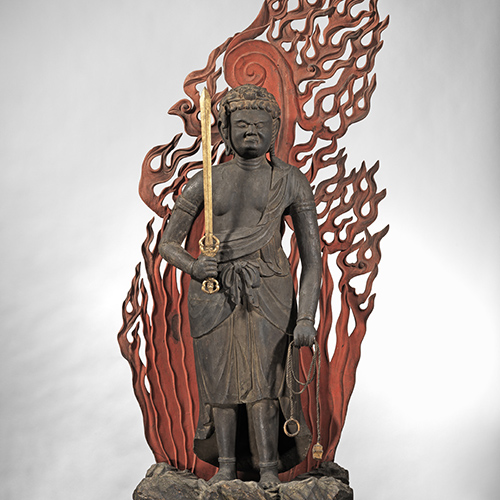 Embarking on an academic expedition to Japan, gallery directors Oliver and Paul Moss visited as many local temples as possible to immerse themselves in Japanese Buddhist sculpture in its true home. Buddhism arrived in Japan during the 6th century from Korea, entailing a religion but also an advanced form of civilisation, including a written script and a highly developed artistic culture. By the 9th century, technical ingenuity in Japan caused broad development in sculptural aesthetics, with newfound carving finesse producing sculptures of great quality and emotive intensity.

Having studied at the source, Oliver and Paul were able to identify a few choice examples of Buddhist figures within the Japanese market, and use their stylistic and technical knowledge to date the pieces. On return to London, the new acquisitions underwent carbon dating tests to confirm their dating deductions; much to their delight, the results confirmed their previous discernments.

Fudo Myo-O, The Immovable, dates from the late 10th to early 11th century, and was formerly part of the temple collection of Kosan-ji in Hiroshima Prefecture, which follows a branch of Pure Land Buddhism (see Notes to Editors). The indomitable protector of Shingon Buddhism, he is the guardian and militant defender of Buddha and his teachings, and stands with fierce resolution engulfed by a flaming mandorla, ready to vanquish evil with fire and assuredly steer people towards enlightenment. Heavily set with rigid shoulders and a sturdy torso, Fudō uses his immovable and unyielding faith to battle the Three Poisons – greed, anger and ignorance – facing all eventualities in a state of unshakeable calm, guiding followers to salvation, and curdling the blood of those who stray.

The figure holds a vajra sword (kongo-ken) to pierce ignorance in his right hand, and a rope to snare evil in his left. His small and centralised facial features are emblematic of the late Heian period, along with the near-disfigured nature of his squinting left eye, and the two fangs protruding in opposite directions from his snarling mouth. The long braid hanging to the left of Fudo Myo-O’s face is also indicative of the traditional imagery of the fierce yet composed protector of mankind.

Fudo Myo-O remains an important figure in Buddhism, and has retained enduring resonance in Japan as a protector against evil and disaster, particularly fire, even inspiring contemporary artists with his distinctive imagery. Hirayama Ikuo (1930– 2009), a Nihonga painter who used Buddhist iconography in his works to express the importance of peace and humanitarian efforts, found great solace in the attributes of Fudo Myo-O when personally witnessing the aftermath of the Hiroshima bombing of August 1945. Suffering from severe radiation sickness, he turned to Fudo to inspire recovery from the tragedy, viewing him as a “symbol of the reborn city, of life emerging from within the flames of destruction”. 1 Enveloped by a flaming mandorla, Fudo stands resolutely on a large rock, exuding strength, authority and composure – an inspiration for us all in times of devastation, disease and disaster.