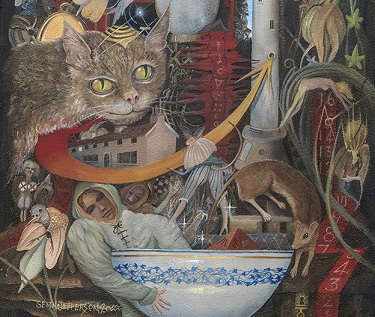 We are delighted to announce Sean Jefferson's first exhibition with Messum's. Jefferson fits into a long tradition of British visionary artists.

As he has himself remarked, ‘I feel born out of time. I seem to see the world through the lens of fin de siècle authors and magical practitioners, with whom I have a natural empathy.’

As a student of Microbiology Jefferson first learnt to closely observe the natural world, and the death of German surrealist Max Ernst in 1976 that inspired him to pursue the life of an artist. In Cornwall he encountered and worked closely with members of the Brotherhood of Ruralists, a group of like-minded older artists that included Peter Blake and David Inshaw. Though with no formal training as an artist, Jefferson has enjoyed considerable success and recognition from an early stage in his career.