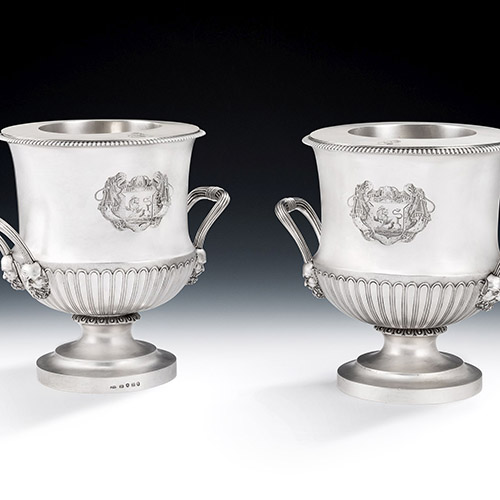 For BADA Week 2022, Mary Cooke Antiques have chosen to feature this important pair of George III wine coolers made in London in 1807 by William Frisbee.

The wine coolers are presented with their original case and watercolour portrait of the original owner Thomas Smith Esq, ( 1746-1823 ), Lord Mayor of London in 1809-10.

The Coolers are of Classical "Campana" form and stand on a circular pedestal foot.  The lower section of the main body is decorated with flat fluting on a matted ground.  The plain section above is engraved, on both sides, with a contemporary Armorial surrounded by a beautifully executed cartouche of drapery mantling.

The two side handles are decorated with bold reeding and very finely detailed Bacchus mouldings, where the handles are attached to the main body.  Bacchus was the ancient Greco-Roman God of wine and festivity.  The sides rise to an everted rim decorated with lobing and the removable plain collars are both engraved with a contemporary Crest.  Each has a removable central ice cylinder, also engraved with the same Crest as seen on the collars.

The Coolers are in quite excellent, crisp, condition mainly because they have been contained in their original case and are of an outstanding weight.  They are fully marked on the base, interior cylinder and collar.  Both are contained within their original leather lined wooden case, with brass fittings. 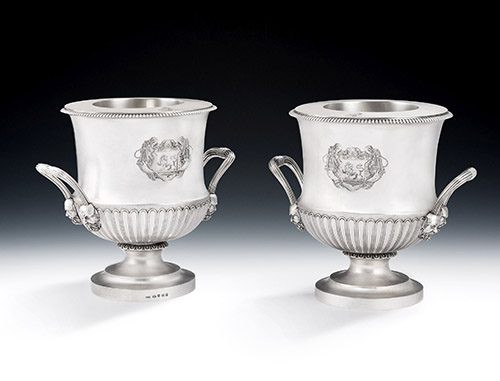 William Frisbee was apprentice to the important Salver and Tray maker John Crouch and was son of John Frisbee of the Old Bailey, Citizen and Tallow Chandler of London.  His first mark was entered in 1791.  On 2nd May, 1792, he entered into partnership with Paul Storr, considered the greatest ever English silversmith.  The quality of Frisbee's work either alone, or with Paul Storr, is exceptional.  He died 9th December, 1820.

The Armorials and Crests are those of Thomas Smith, a wine merchant on Bridge Street near Blackfriars who served as Lord Mayor of London 1809-10.  He served as a magistrate after his ascent to the mayoralty and lived between London and Brighton in his last years.  Smith was appointed an Alderman in the City of London's Farringdon Within Ward in 1802.  He was also a liveryman of the Worshipful Company of Leathersellers, and served as Master of that Company in 1812-13.

The Leathersellers company is one of the livery companies of the City of London.  The organisation originates from the latter part of the fourteenth century and received its Royal Charter in 1444.  The Company ranks fifteenth in the order of precedence of livery companies.  The company's motto is "Soli Deo Honor et Gloria - Honour and Glory to God Alone".  The Coolers come with a framed watercolour portrait of Thomas Smith, as Lord Mayor, circa 1809.