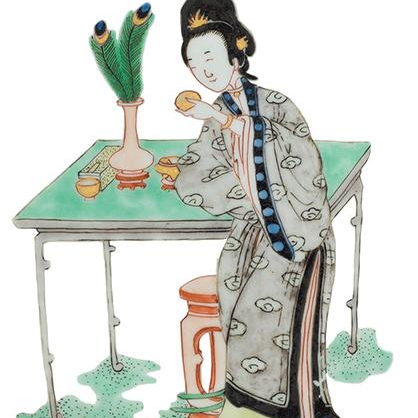 Marchant are delighted to announce the exhibition and sale of Famille Verte from Private Collections.

This is Marchant’s second exhibition dedicated to Chinese porcelain produced during the reign of the Kangxi emperor painted in famille verte, wucai enamels. The exhibition coincides with Asian Art in London 2021.

The exhibition comprises eighteen carefully selected pieces, primarily from celebrated collections and none have been recently published by Marchant.

Few dated pieces of Chinese porcelain exist, the pair of superbly enamelled meiping-shaped vases, no.8, dated to 1701 are a benchmark for dating Chinese ceramics. They are “old friends” of Marchant, published in 2001, having been in notable collections and exhibitions both before Marchant owned them and indeed more recently in the Jie Rui Tang Collection. Research has enabled Marchant to decipher the unusual scene across both vases where an official has been instructed to move to another position and is unusually presented with new boots. Another piece with an interesting subject matter is the rouleau vase no. 6, with a famous scene from Cailou Ji (The Bunted Loft) with the impoverished scholar Lü Mengzheng, sitting on a well head dressed in his patchwork robes waiting for the wealthy heiress Liu Yue’e to toss her brocade ball as she has vowed to marry whoever catches it.

Marchant has been family owned and run for 96 years. The longevity of the business has enabled them to know the market intrinsically. The marvellous ovoid vase, no.10 expertly painted with a vibrant scene of a lady amongst scholars and attendants from the W. A. Evill Collection, had been known to Marchant since it sold at Sotheby’s London in 1965, when it went to The Netherlands. Marchant were later able to purchase it from another dealer, having had a particular desire to own this vase.

Provenance is of utmost importance to Marchant and two pieces in the exhibition have been in the famous collection of T.Y. Chao, nos. 12 and 18. One of these pieces is a charming brushpot painted with elegant ladies. Brushpots are one of the most popular forms in Chinese art for both the collector and the scholar and we have four in the exhibition. The rouleau vase painted with birds, insects and foliage in a wonderful style in a continuous scene reminiscent of a painting, from T.Y. Chao was also in the collection of the Most hon. the Marquess of Lansdowne P. C. and previously sold at Sotheby’s London in 1973.