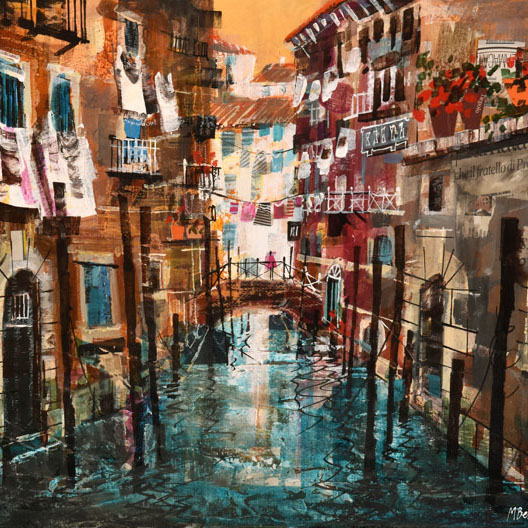 Walker Galleries are delighted to welcome back Mike Bernard for his biannual solo exhibition. Mike has a very distinctive and instantly recognisable style.

Born in Kent in 1957, award winning artist Mike Bernard trained at the West Surrey College of Art & Design, Farnham, followed by post graduate studies at the Royal Academy Schools. Since then he has exhibited widely in London and the provinces. Mike was elected a member of the Royal Institute of Painters in Watercolour in 1997.

Numerous group exhibitions include the Royal Academy Summer Exhibition, London and the RI Annual Exhibition, Mall Galleries, London, including in 2018, where he was awarded the Dry Red Press award. Publications include “Collage, Colour and Texture in Painting” by Mike Bernard and Robert Capon, 2010, Artist Magazine, International Artist and Leisure Painter.

“My initial starting point is to collect on the spot sketches; subjects will vary from harbour coastal scenes to street and market scenes and occasional still lifes. I am selective when describing detail, as I want to portray only the essence of the subject. Back in the studio I start my paintings, (surfaces can include, paper, board and canvas), with layers of paper collage, newspapers, tissue, leaflets, magazines etc, glueing with acrylic medium.

"I create shapes which relate to the abstract structure of the subject. When the glue is dry, I apply acrylic ink in bold random strokes which encourages wonderful colour and textural ‘happy accidents’. From this state of chaos I endeavour to define the subject through various drawing techniques, to a finished stage where the subject has recognizable passages, but at the same time retains a semiabstract, impressionistic feel, engaging the viewers imagination”.