Exhibition - Isaac and Ede: Mad About Mezzotint at the Court of George III 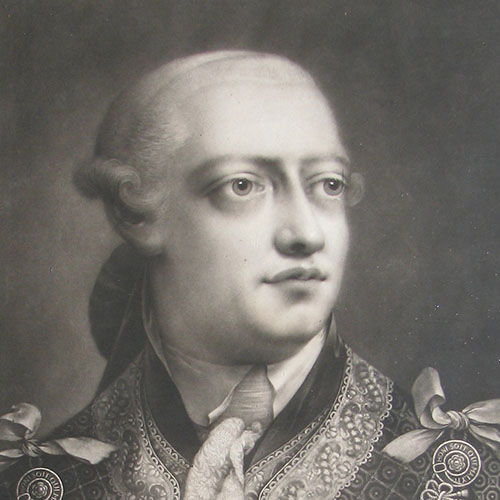 Mad About Mezzotint at the Court of George III

Courtiers and Courtesans, Duchesses and Dandies: Meet the Movers and Shakers at the Court of King George

An exhibition celebrating the long and illustrious reign of King George III through 60 mezzotint portraits, one from each of the 60 years of his reign. Royalty will rub shoulders with Rakes. Politicians will pose alongside Parvenus.

In an age before Instagram there were such things as photograph albums.  In an age before photograph albums there were such things as mezzotints. Let us, therefore, venture back in time to imagine how we would capture the great and the good (not forgetting the scoundrel and the scallywag!) of Georgian England without the aid of either Instagram or email but with the inestimable resource of the mezzotint portrait.

This catalogue does not pretend to offer a definitive who's who during the reign of George III, for there will be many glaring omissions. Nor does it purport to be a weighty historical synopsis of the period. It is, instead, a light-hearted scamper through the reign: a miscellany of characters who will have something to say about the age in which they lived.

Each plate has been printed in the year it represents, so there are 61 prints to cover the years 1760 - 1820 with a couple of extras thrown in for good measure. Royalty and aristocracy dominate throughout the opening decades, but as the country finds itself increasingly at war with America, France, Spain (and practically everyone else) we see a predominance of naval and military heroes taking centre stage. Towards the end of our period, we begin to see the emergence of the self-made man and the entrepreneurial spirit that would come to symbolize the Victorian era.

Some years provided an abundance of images, others a dearth. With Sir Joshua Reynolds at the peak of his productivity, the early 1770s are spoilt for choice and I found myself falling over lords, ladies, legends and luminaries. The final and most challenging year to fill was 1809 and yet, when my quest was finally over, I found one of the most intriguing characters of all; I will let you discover for yourself who it is.

I hope that you enjoy this catalogue as a snapshot of life in England under the fascinating reign of George III.